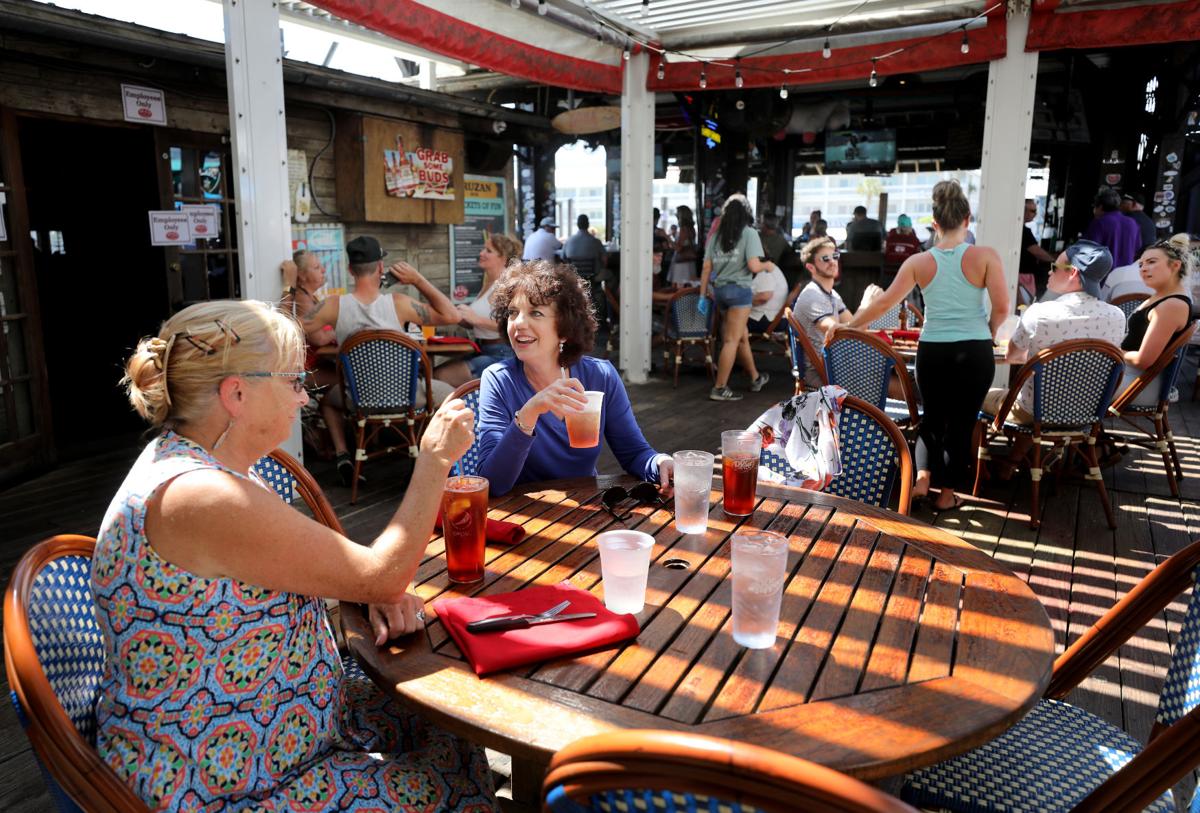 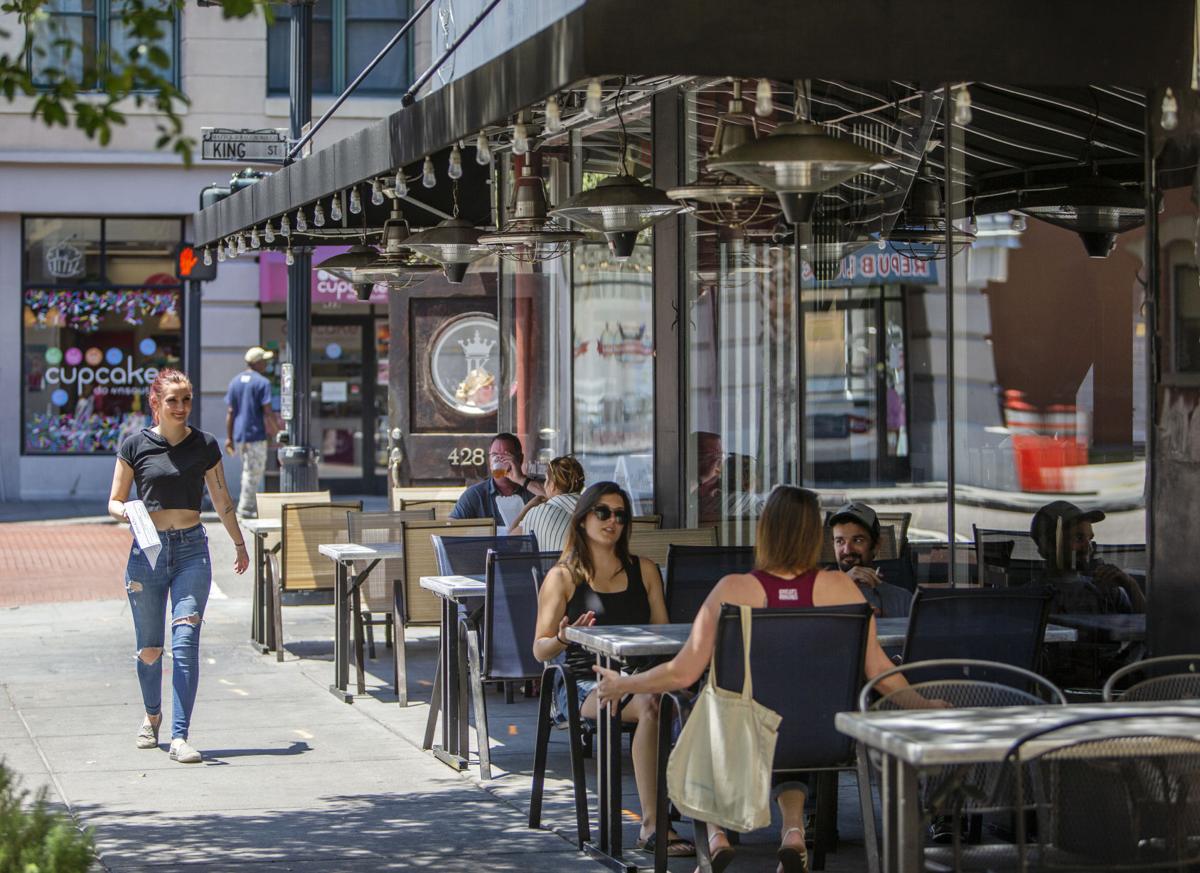 Diners sit outside JohnKing Grill & Bar for lunch Monday May 4, 2020, in Charleston. Restrictions were lifted in South Carolina to allow restaurants to have outside dining. Gavin McIntyre/Staff 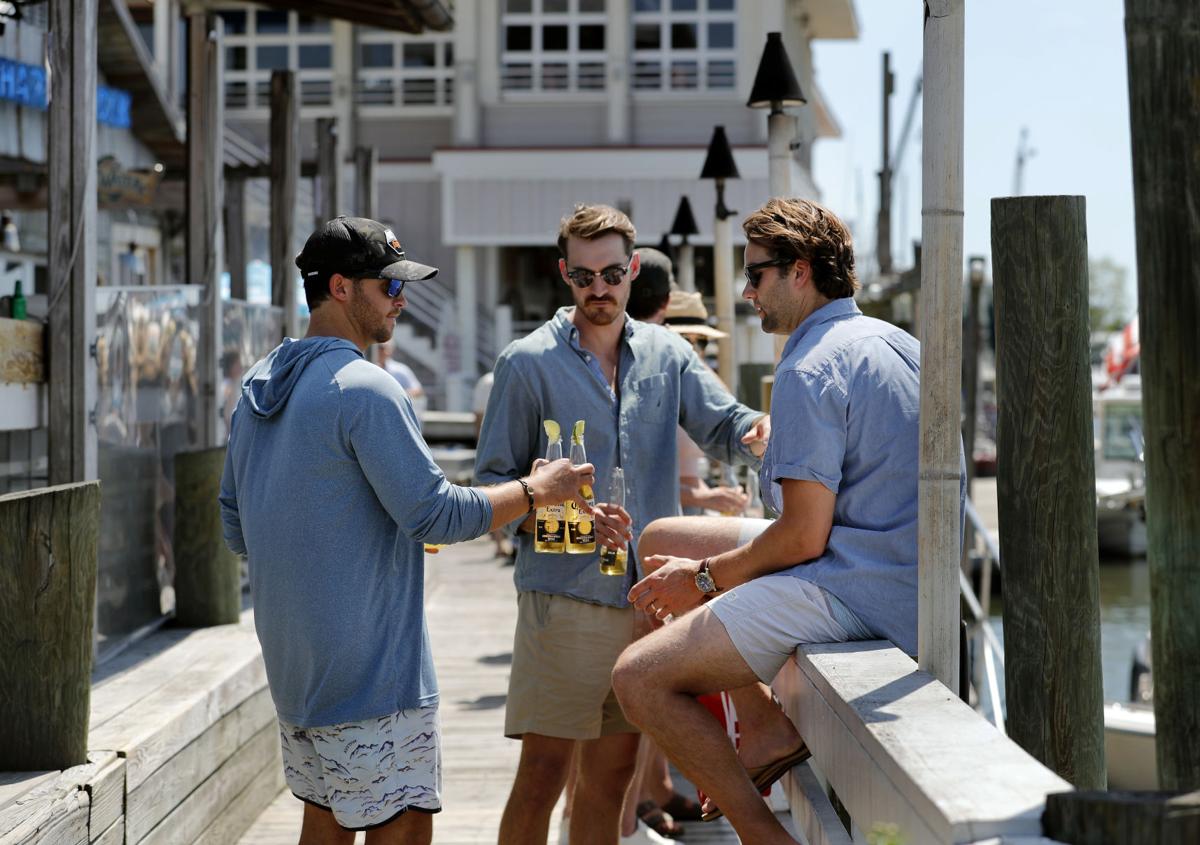 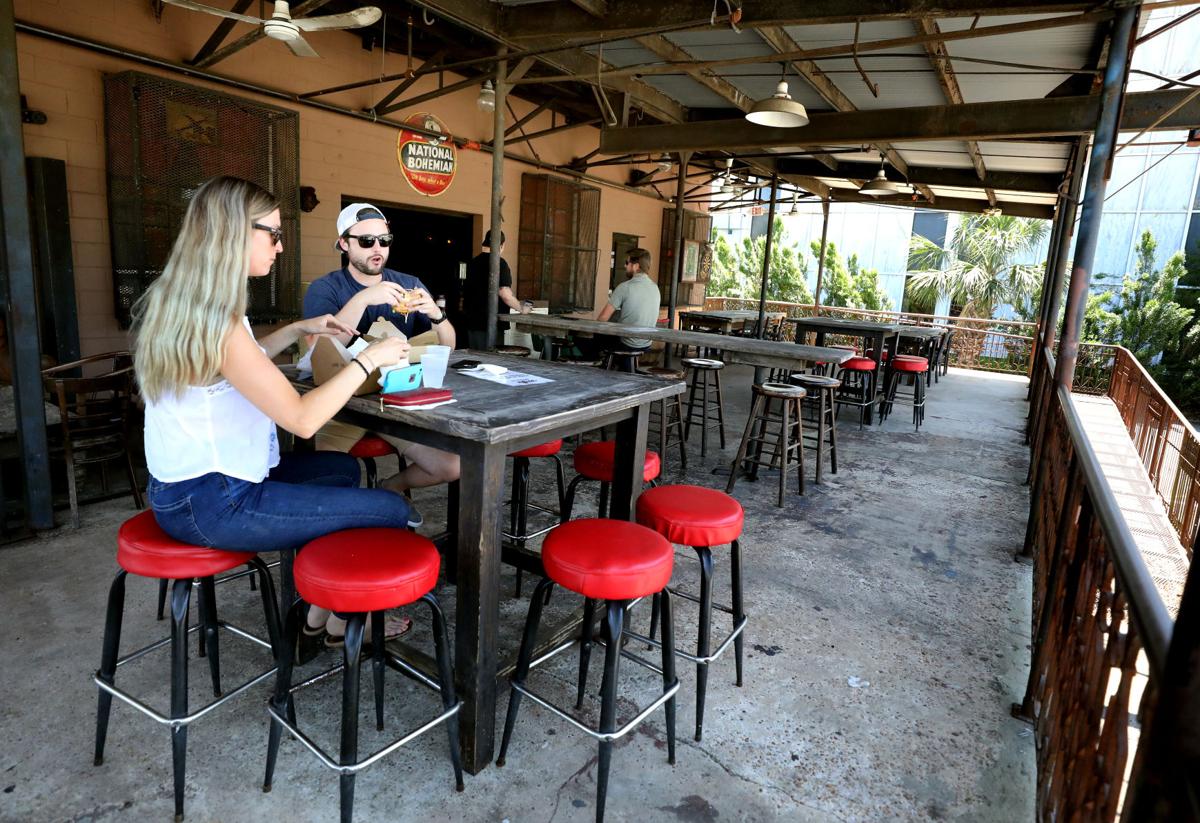 Customers eat lunch on the patio at the Royal American on Monday, May 4, 2020, in Charleston  Grace Beahm Alford/Staff 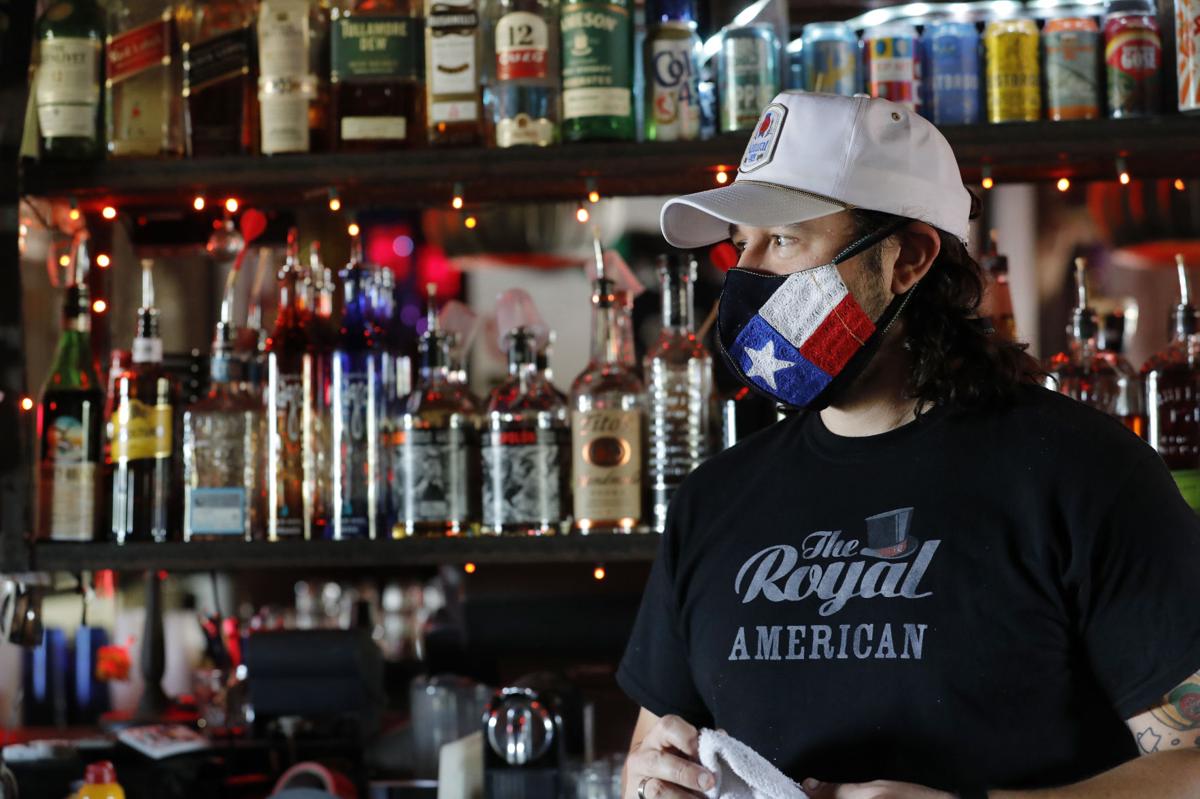 Bartender Jose Chapa tends bar at The Royal American on May 4, 2020, in Charleston. Grace Beahm Alford/Staff 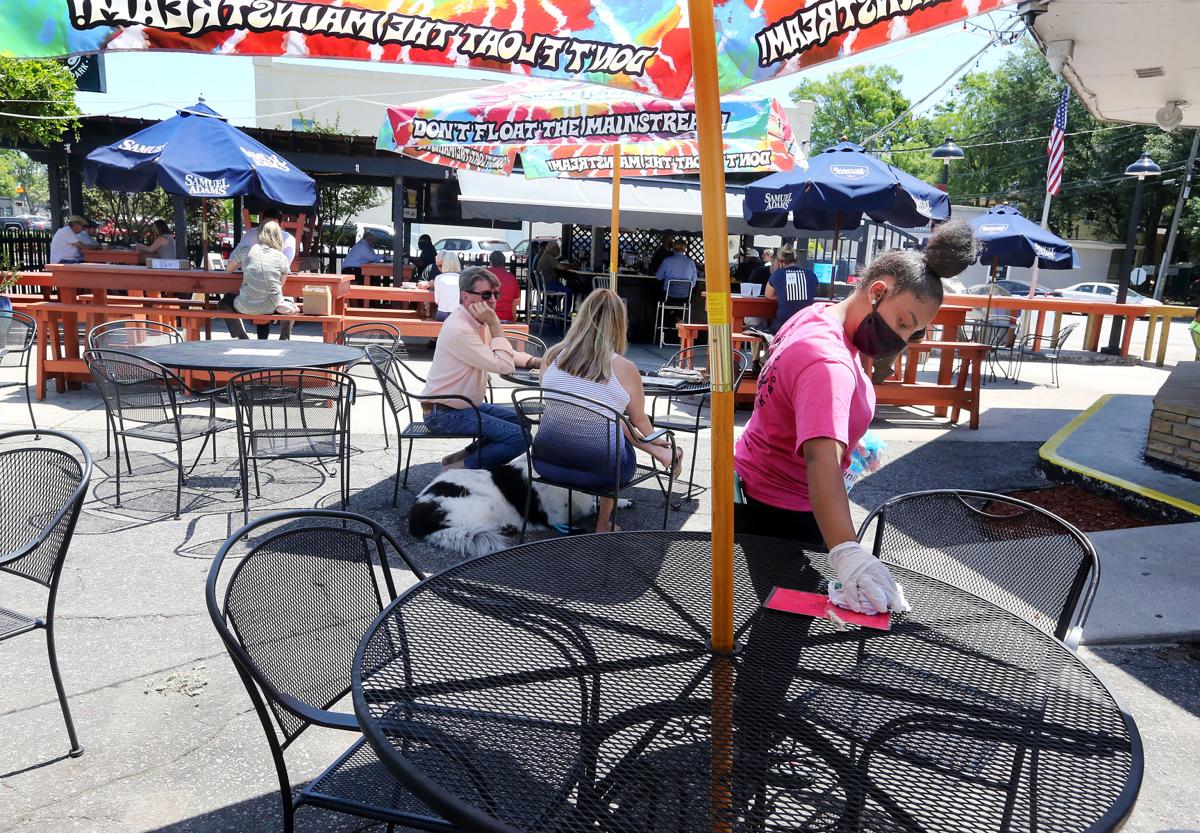 DIG in the Park waitress Chyna Rollin sanitizes a table after customers finished their lunch in May. At press time, the Park Circle restaurant was open for outside dining only. Brad Nettles/Staff

Diners sit outside JohnKing Grill & Bar for lunch Monday May 4, 2020, in Charleston. Restrictions were lifted in South Carolina to allow restaurants to have outside dining. Gavin McIntyre/Staff

Bartender Jose Chapa tends bar at The Royal American on May 4, 2020, in Charleston. Grace Beahm Alford/Staff

Looking approvingly toward the Monday midday crowd on Red Ice House’s back deck, a contractor for another Shem Creek restaurant nodded as the last strains of “Play That Funky Music” died away. “Nice to see people out again,” he said.

Exactly four weeks after Gov. Henry McMaster issued a stay-at-home order for South Carolinians, some Charleston-area diners were so anxious to feel less cooped-up that they willingly waited up to 40 minutes in their cars for an available restaurant table on the first day that legal on-premise dining returned statewide. “They’re happy, and we’re just really happy for them,” Skipper Kress, a member of Red’s leadership team, said.

According to social media reports, approximately five dozen local restaurants on Monday acted on McMaster's announcement allowing restaurants to either resume outdoor service or set up an adjacent tent for the same purpose. The state has not yet announced when restaurants will be able to serve diners indoors.

South Carolina on the same day reported 135 new cases of coronavirus, bringing the state total to 6,757.

“Everyone is starting to realize Charleston will get through this,” Kress said of the exuberance that greeted lit-up "open" signs across town. Still, he added, “We wish we had a few more days to get prepared.”

When the S.C. Restaurant and Lodging Association last week presented its reopening timeline recommendations to McMaster, its leaders pushed back against the notion of opening fully in advance for Mother’s Day, saying restaurant owners needed more time to recall and retrain staff, as well as deal with supply chain hitches that didn’t exist prior to the pandemic.

Kress confirmed that Red’s confronted numerous shortages in the run-up to welcoming back customers.

Red’s now has hand sanitizer in “90 places instead of half a dozen,” but hasn’t yet been able to source the rags it needs to properly clean tables, so its servers are wiping down tables with paper towels.

“There are meat shortages; paper product shortages; some of the beers aren’t coming in,” said Kress, who resisted saying Red’s was open. With seating capacity docked 70 percent by the closure of indoor seating and a suggested 8 feet of space between outdoor tables, Kress prefers to consider the popular restaurant “open-ish.”

In Columbia, the owner of Pawleys Front Porch said he’d be pleased to get back to selling half of what he did in normal circumstances. According to Kirkman Finlay, revenue dropped to about 15 percent of usual while the restaurant was restricted to takeout and food truck sales. He called outdoor dining “a good first step,” saying, “We have not done this at full speed for six weeks. You need the practice.”

Restaurants along the eastern side of Shem Creek adopted a different safety protocol in the wake of McMaster’s order, which left most specifics up to owners. For instance, the order didn’t mandate servers wear masks, so while most of the servers at Tavern & Table donned black masks to match their uniforms, few of the servers at Red’s chose to wear any kind of face covering.

A sign now posted in front of Red's informs guests that employees "have been given all the sanitizers, gloves and other tools they need and they know how and when to use them," concluding, "We are Americans: Strong, smart and resilient. Use common sense and keep your sense of humor."

Both Red's and Tavern & Table stripped their tables of condiments, while Saltwater Cowboys arranged orange cones to space out the many customers hoping for a table on what felt like one of the Lowcountry’s first summer days. But several restaurant owners have pinned the unofficial “first day of summer” title on Cinco de Mayo, which falls on Tuesday.

Partly out of concern over compliance with social distancing measures during the boisterous holiday, Charleston City Council on Monday discussed an ordinance that would allow the city to enforce suggestions that accompanied McMaster’s order, in addition to provisions the SCRLA didn’t broach, such as putting a ceiling on capacity.

Under the city ordinance, seating in outdoor areas would be limited to 50 percent of the occupancy limit set by the fire marshal.

“I would like for Charleston to have the reputation for taking steps to be the safest place we could possibly be,” Mayor John Tecklenburg said at Monday’s meeting. “I remain convinced that will lead to a more robust recovery than letting things get out of hand.”

Councilmen Mike Seekings and Jason Sakran were among those who advocated for putting off a vote on the ordinance, saying they first wanted more input from members of the restaurant industry.

Sakran pointed out that supply chain issues could prevent restaurant owners from acquiring the hand sanitizer mandated by the ordinance, while some downtown restaurant owners feel they’re missing out on a much-needed money-making opportunity because they don’t have outdoor seating. “Let’s invite them to a meeting and figure out what they need,” he said.

Council will take up the ordinance again on Wednesday. In the meantime, if Monday at restaurants such as The Shelter Kitchen and Bar; The Kickin' Chicken and Recovery Room is any indication, relieved Lowcountry residents will continue to congregate in groups of seven or eight to lift drinks and celebrate.

Andy Shain contributed to this report.

Understand SC: What coronavirus has done to Charleston's famous food and beverage scene

Restaurants have become a marker of sorts during the coronavirus pandemic. They were among the first businesses to close, and the first to ann…