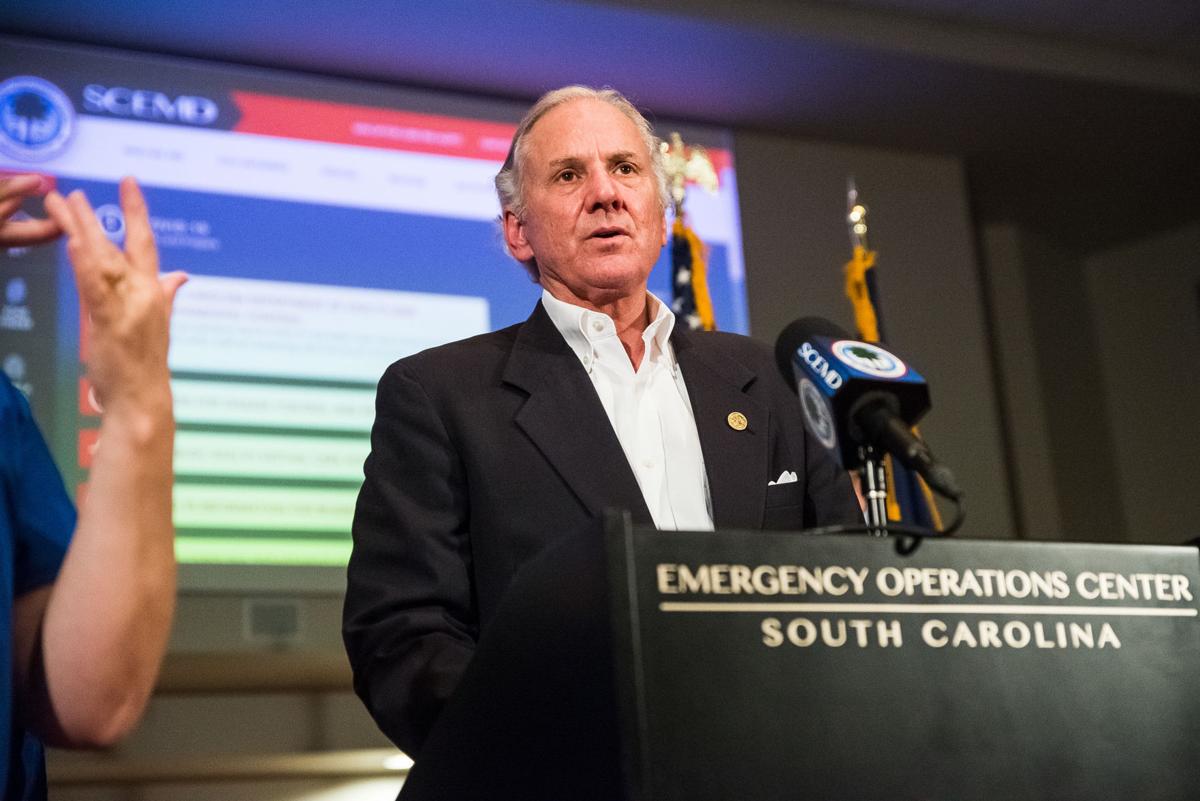 Gov. Henry McMaster gives updates on the state’s preparedness for COVID-19 at the state emergency operation center on March 15, 2020. Photo by John Carlos 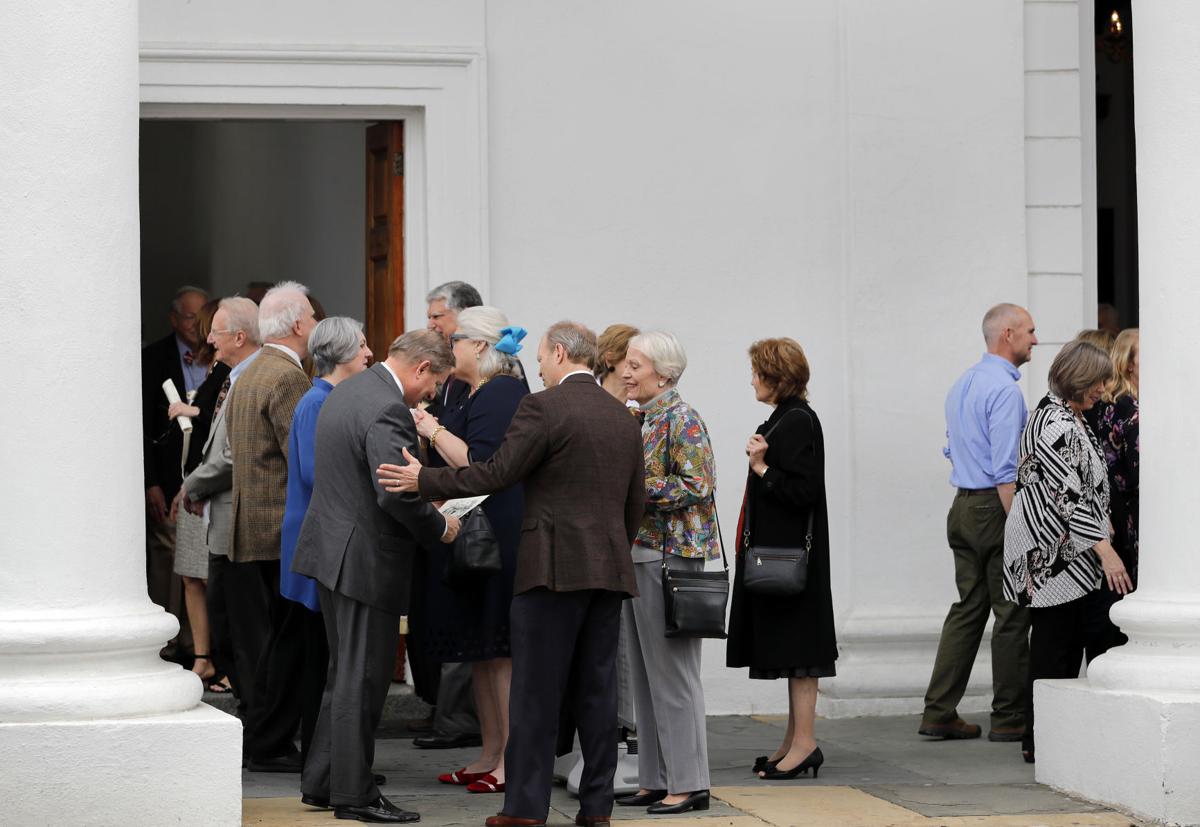 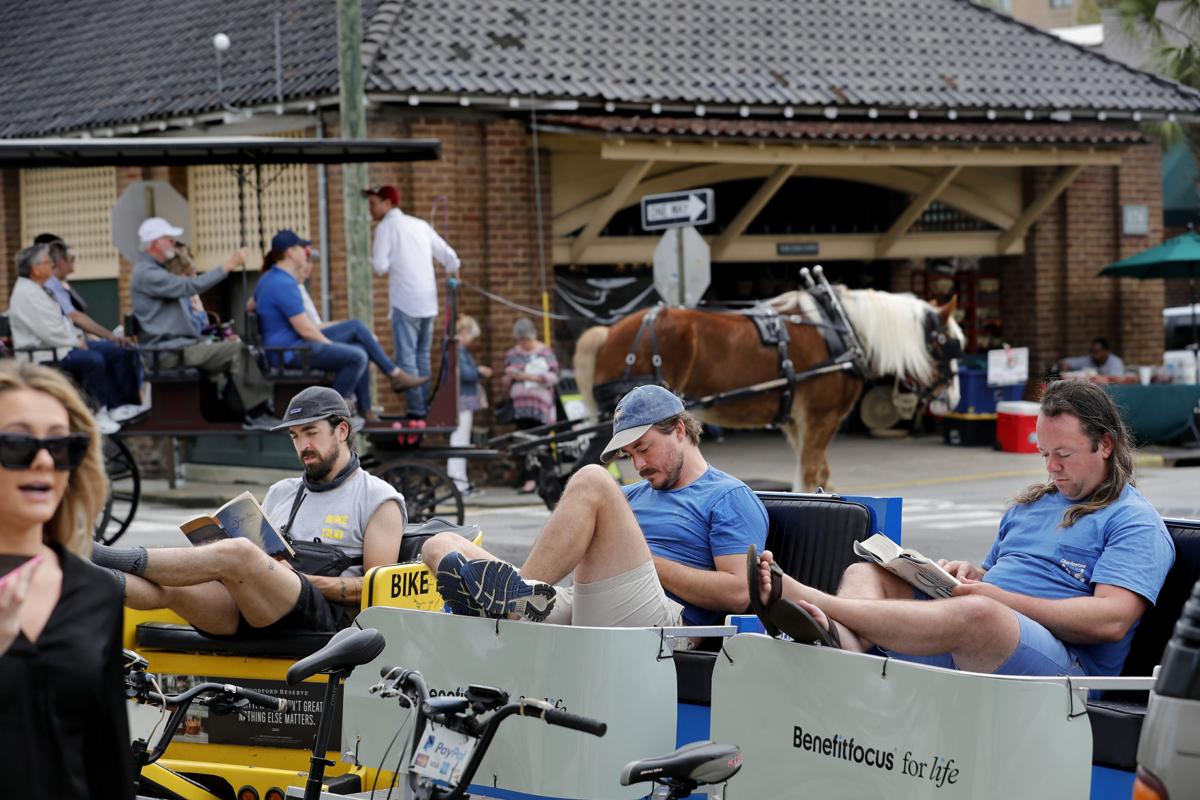 “It’s noticeably less busy.’” said Josh Groome, center, who works for Charleston Pedi Cab as he waited for fares on Market Street along with BJ Stadelman, left, with Bike Taxi, and Max Dotterer, right Sunday, March 15, 2020 in Charleston. “I fully expect it to not be that busy for a while. We have bleach and lysol and sanitizer and we clean after every ride,” said Groome. 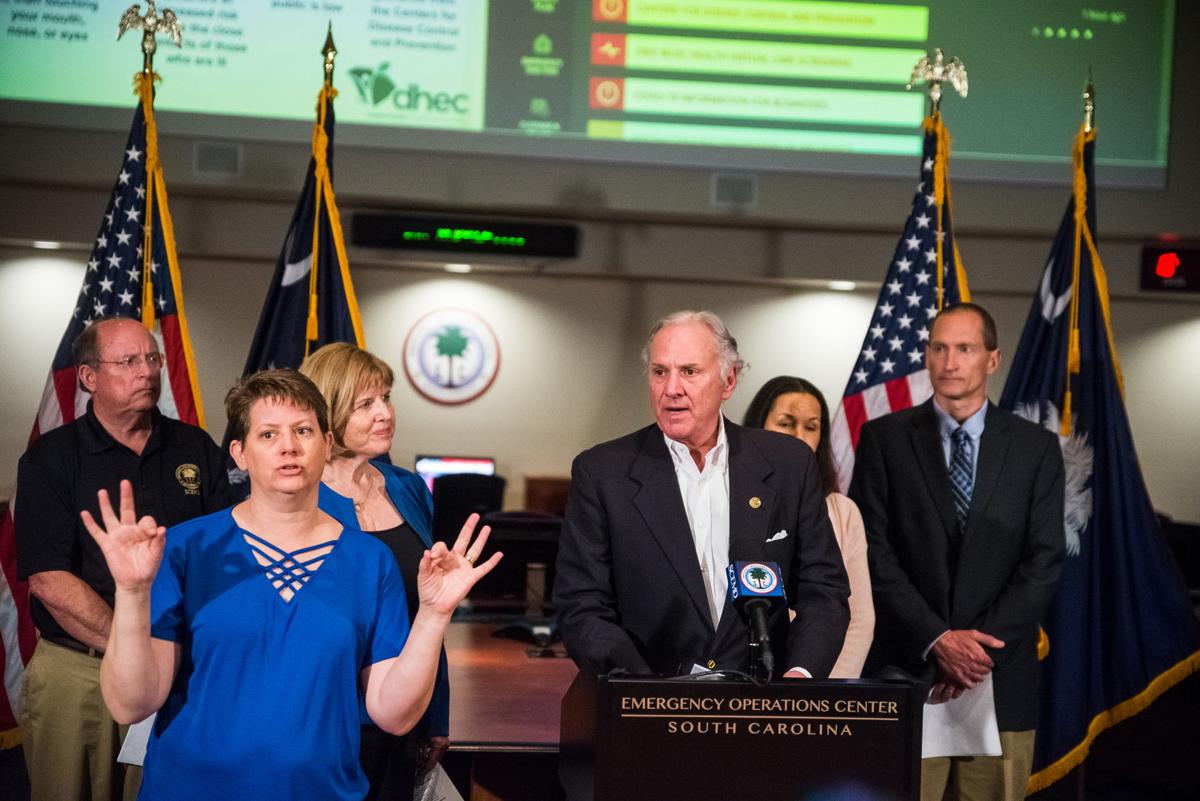 Gov. Henry McMaster gives updates on the state’s preparedness for COVID-19 at the state emergency operation center on March 15, 2020. John A. Carlos II/Special to The Post & Courier

Gov. Henry McMaster gives updates on the state’s preparedness for COVID-19 at the state emergency operation center on March 15, 2020. Photo by John Carlos

Gov. Henry McMaster gives updates on the state’s preparedness for COVID-19 at the state emergency operation center on March 15, 2020. John A. Carlos II/Special to The Post & Courier

As cases of coronavirus continued to spread across South Carolina, Gov. Henry McMaster on Sunday ordered all public schools and colleges closed until March 31 and urged communities to limit all public gatherings to 100 people or less.

Nine new cases of the virus have been identified in the state, bringing South Carolina's total to 28. No deaths have been reported, but the S.C. Department of Health and Environmental Control said it is not tracking the conditions of patients with confirmed cases. 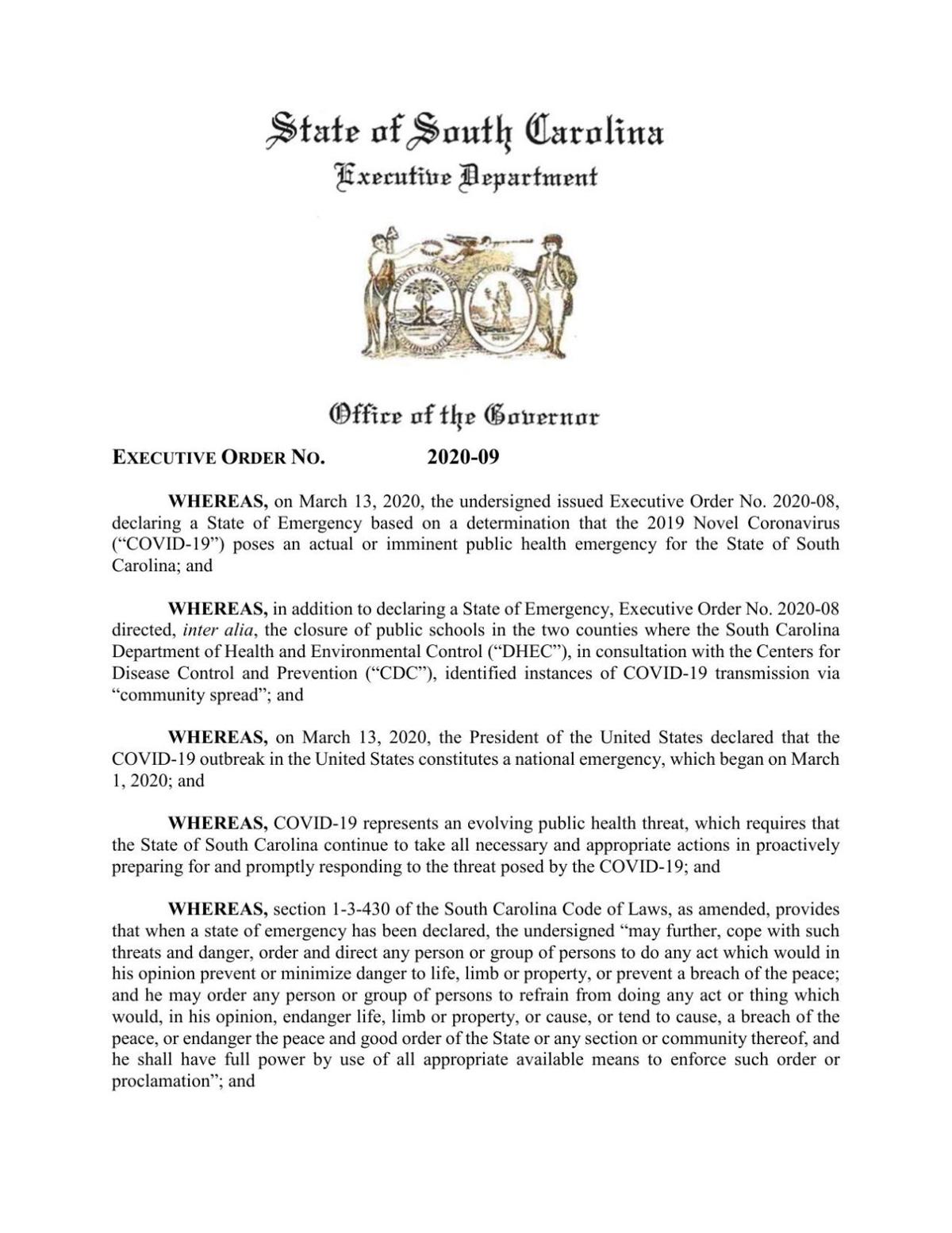 Three new cases were identified in Kershaw County, which now accounts for half of the state's cases. Three cases were found in Horry County, two in Anderson County and one in Greenville County — the first cases reported in those areas.

So far, 263 tests for the virus have been conducted in South Carolina with 235 negative results. U.S. Sen. Lindsey Graham said Sunday night that he tested negative for the coronavirus after coming into contact with two individuals who had tested positive.

McMaster said Sunday that there is no shortage of testing capabilities in state and private labs. The DHEC lab will be resupplied with more tests this week, and the Medical University of South Carolina has been authorized to begin testing for the virus by the end of this week, he said.

The Trump administration said Sunday the federal government is ramping up both the availability and analysis of testing this week. According to the Associated Press, the first doses of a potential vaccine were to be delivered Monday for clinical trials.

6 new coronavirus cases in SC, including in nursing home, as residents prep for isolation

While he cautioned against large gatherings, with the exception of businesses or government offices, McMaster said he had no plans to tell South Carolinians to avoid restaurants or bars. He said people should use common sense in going to malls or movie theaters. Many popular attractions said they would close until the end of the month, including Riverbanks Zoo and Garden.

Private schools and day-care centers are not covered in the governor's order, but they were asked to follow the state's closing schedule and some already have.

"School closings are inconvenient. We know that," McMaster said. He asked parents to tell their children the importance of personal hygiene and social distancing.

All students statewide will be able to get free breakfasts and lunches, regardless of whether they normally eat for free. But not every school will prepare the meals.

How Charleston-area schools will continue instruction during coronavirus closures

Where parents and caregivers can go to pick up meals should be posted on each district's website. The meals could be available as early as Monday, when all public schools will close. Kershaw County is one district that's ready to go. But most districts will probably make them available starting Tuesday, state education officials said.

Around 3,000 school buses equipped with Wi-Fi will be made accessible in remote areas for students who do not have internet access. Many public library systems, which offer free internet access, announced they will close for the rest of the month, including the Charleston and Richland county systems.

There may not be any high-stakes, end-of-year testing in public schools this spring. State education superintendent Molly Spearman said she will ask the federal government to waive the requirement for state-standardized testing because of the disruption.

"There’s no need for teachers and students to have the added anxiety of what’s going to happen in testing," Spearman said.

Whether the school year will be extended remains to be seen. Schools districts are working to submit 10-day plans to state education officials, outlining how they will handle the closures and temporarily transition to virtual learning.

At an emergency board meeting on Sunday, Richland One School District Superintendent Craig Witherspoon said mounting requests by district teachers, parents and others led him to consider shuttering schools for their 23,000 students independently of a state government order.

The state’s education department has already approved Richland One’s distance learning plan, which could avoid the need for lost classroom days. Richland One plans to use its website as tool for teachers to communicate with students and parents, including uploading lesson plans, research materials and other information.

“We are starting to have a lot of new normals, and this, too, in the short term, will be a new normal,” Witherspoon said.

Many public colleges already announced plans to push classes online and asked students to avoid campus, including the University of South Carolina.

For those worried they should be tested, allergies may cause a cough and shortness of breath, but a fever in conjunction with other symptoms is the best indication someone may have contracted the virus, DHEC officials said Sunday.

Religious leaders also struggled on how to best protect their congregants.

Some places of worship closed their doors to physical gatherings and chose to stream services online. Others determined that since the state had not recommended or mandated the canceling of public events, religious services should continue as planned.

Many agencies are taking precautions to limit the spread of COVID-19.

The Charleston County Sheriff's Office announced late Saturday that going forward, deputies would respond as single units to non-emergency service calls at high-risk locations such as nursing homes, events with large crowds or medical facilities. Some non-emergency calls will be handled by telephone. Other law enforcement agencies released similar policies.

A spike in coronavirus cases could overwhelm SC hospitals

The latest coronavirus cases in South Carolina show the different ways people are becoming infected — some by those already battling the virus and those with no known source.

The two new cases in Kershaw County are household contacts of a previous case, DHEC officials said. Another new case from Kershaw County is a middle-aged day-care worker with no identified source of exposure.

Two cases in Horry County are elderly individuals with exposure to a confirmed case of COVID-19 from another state. No further details were available on the third new patient, who is also elderly.

In Anderson County, two middle-aged individuals without an identified source of exposure have tested presumptive positive for the virus. They are currently hospitalized in isolation. A young adult who recently traveled to Spain is isolated at home in Greenville County.

The outbreak led McMaster to postpone all special local and municipal elections until after May 1. Candidate filing will start Monday as normal.

South Carolina Democrats are being asked to postpone their 2020 county conventions, a mandatory part of selecting delegates for the 2020 Democratic National Convention in Milwaukee. Thirty-eight counties need to hold conventions. Two were scheduled to take place Monday.

"We have already begun discussions about options for conducting county conventions if they are not able to be held in a physical location. We will provide further guidance in the middle of this week," the memo obtained by The Post and Courier stated.