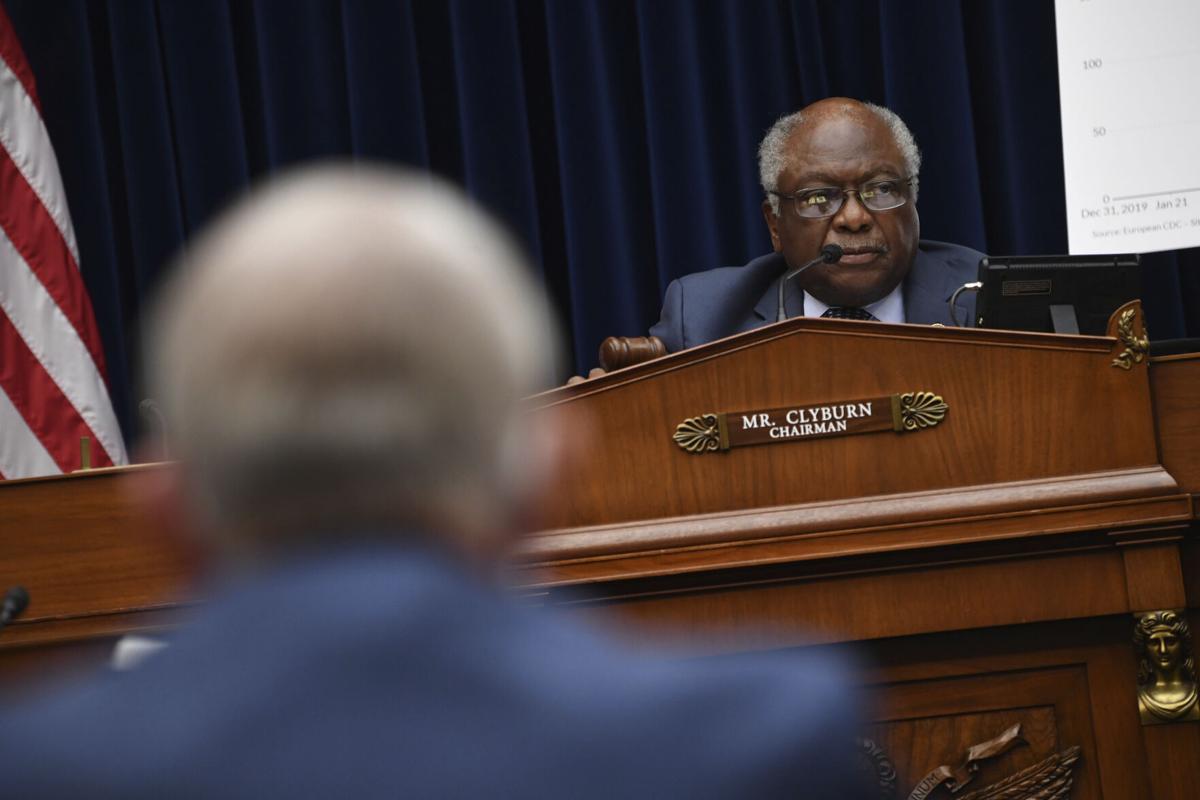 Chairman James Clyburn, D-S.C., listens to testimony during a House Subcommittee hearing on the coronavirus crisis on Friday, July 31, 2020 on Capitol Hill in Washington, D.C. Kevin Dietsch/Pool via AP 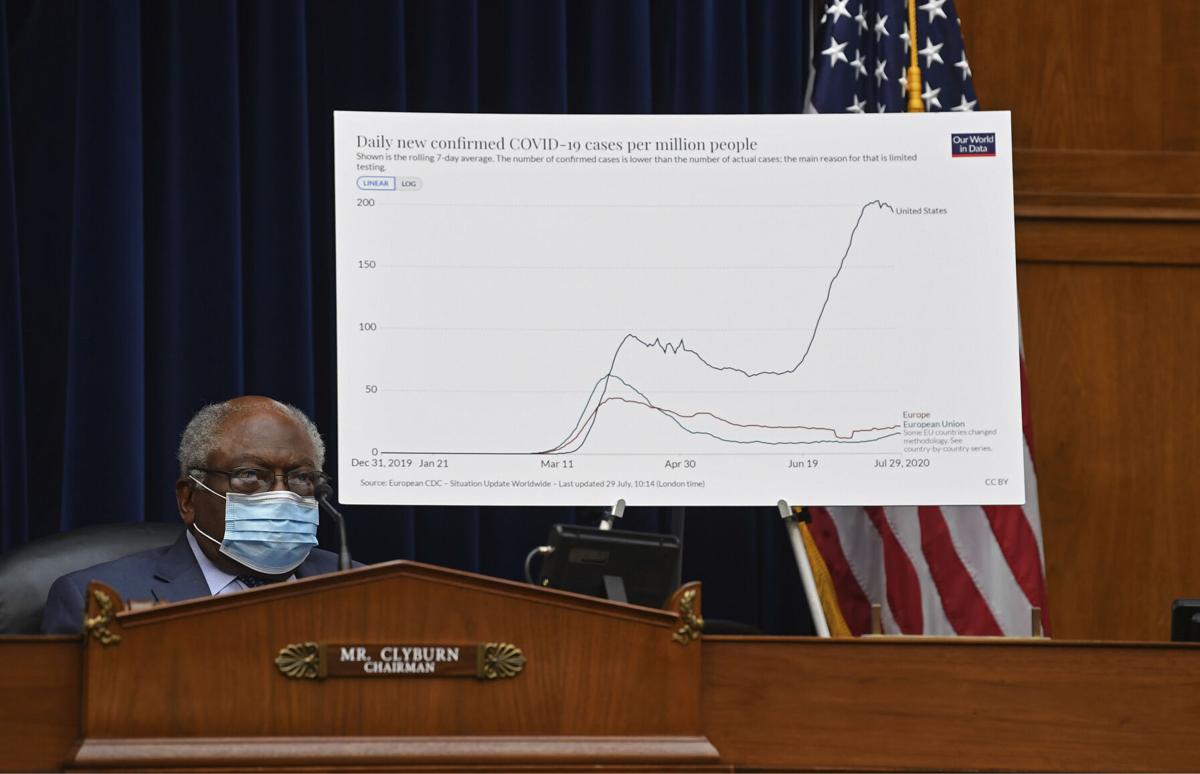 When U.S. Rep. Jim Clyburn called on the Trump administration to develop a national strategy to slow the spread of the novel coronavirus, the president appeared to be watching from afar.

Clyburn, a Democratic South Carolina congressman who chairs the House select subcommittee on the coronavirus crisis, declared on Friday that America is now in the middle of a "public health catastrophe."

He cited his home state's lagging testing abilities to make the case that the nation can no longer afford to address COVID-19 on a state-by-state basis.

"It is clear that the administration's approach of deferring to the states, sidelining the experts and rushing to reopen has prolonged this virus and led to thousands of preventable deaths. The United States' response stands out as among the worst of any country in the world," Clyburn said.

He stood up from his seat and gestured to rising lines on a chart, which showed the coronavirus caseload is much higher in the United States than it is in Europe and Asia.

Trump, who had no public events on his schedule Friday, fired off a pair of tweets criticizing Clyburn's understanding of America's rising coronavirus caseload as the hearing got underway.

"Somebody please tell Congressman Clyburn, who doesn't have a clue, that the chart he put up indicating more CASES for the U.S. than Europe, is because we do MUCH MORE testing than any other country in the World. If we had no testing, or bad testing, we would show very few CASES," Trump wrote, repeating a false claim which has been debunked by his own top public health officials.

Trump went on to defend America's testing capability as "massive" and said it was being used by "the Lamestream Media and their partner, the Do Nothing Radical Left Democrats, as a point of scorn."

.....Our massive testing capability, rather than being praised, is used by the Lamestream Media and their partner, the Do Nothing Radical Left Democrats, as a point of scorn. This testing, and what we have so quickly done, is used as a Fake News weapon. Sad!

But even as the president tried to tweet a counter-message, his own health officials testified that the spike in cases was due to the administration's decision to leave coronavirus shutdown decisions to the states.

Dr. Anthony Fauci, the nation's top infectious disease expert, said when European countries shut down activities they did so "to the tune of 95-plus percent of the country." That decision, he said, brought cases down to a much lower baseline before the countries reopened.

By contrast, Fauci said America "really only functionally shut down about 50 percent of the country."

Fauci was one of three of the Trump administration's top health officials who faced questions about the pandemic for more than three hours on Friday from the 12-member committee. The other two witnesses were Centers for Disease Control and Prevention Director Robert Redfield and Brett P. Giroir of the Department of Health and Human Services.

Lawmakers zigzagged from topic to topic during the hearing. Each member had five minutes to ask questions, which ranged from inquiries about best practices on school reopenings to whether or not protests should be limited during the pandemic.

The top Republican on the panel, U.S. Rep. Steve Scalise of Louisiana, accused Democrats of trying to politicize the pandemic.

Holding up reams of paper, Scalise questioned how the committee could hold a hearing demanding a national plan when that very stack of paper contained plans from federal agencies and the White House about how to tackle the coronavirus crisis.

"You wouldn't even be here today if there wasn't a plan because you are the people tasked with carrying out the plan," Scalise told the witnesses.

When the subcommittee returned from a five-minute recess to start a second round of questioning, Clyburn addressed the president's two tweets by reading parts of them aloud. He then posed a question to Fauci that doubled as a real-time fact-check.

"Now, Dr. Fauci do you agree with the president's statement, or do you stand by your previous answer that the difference is caused by multiple factors, including the fact that some states did not do a good job of reopening?"

Facui did not hesitate, saying he stood by his previous statement.

"The increase in cases was due to a number of factors, one of which was in the attempt to reopen," Fauci said.

In some situations, he said, states did not abide strictly by the guidelines that the task force and the White House had put out.

"And others that even did abide by it, the people in the state, actually, were congregating in crowds and not wearing masks," Fauci said.

The hearing on Friday was held exactly six months after Health and Human Services Secretary Alex Azar declared the coronavirus outbreak a public health emergency for the entire United States.