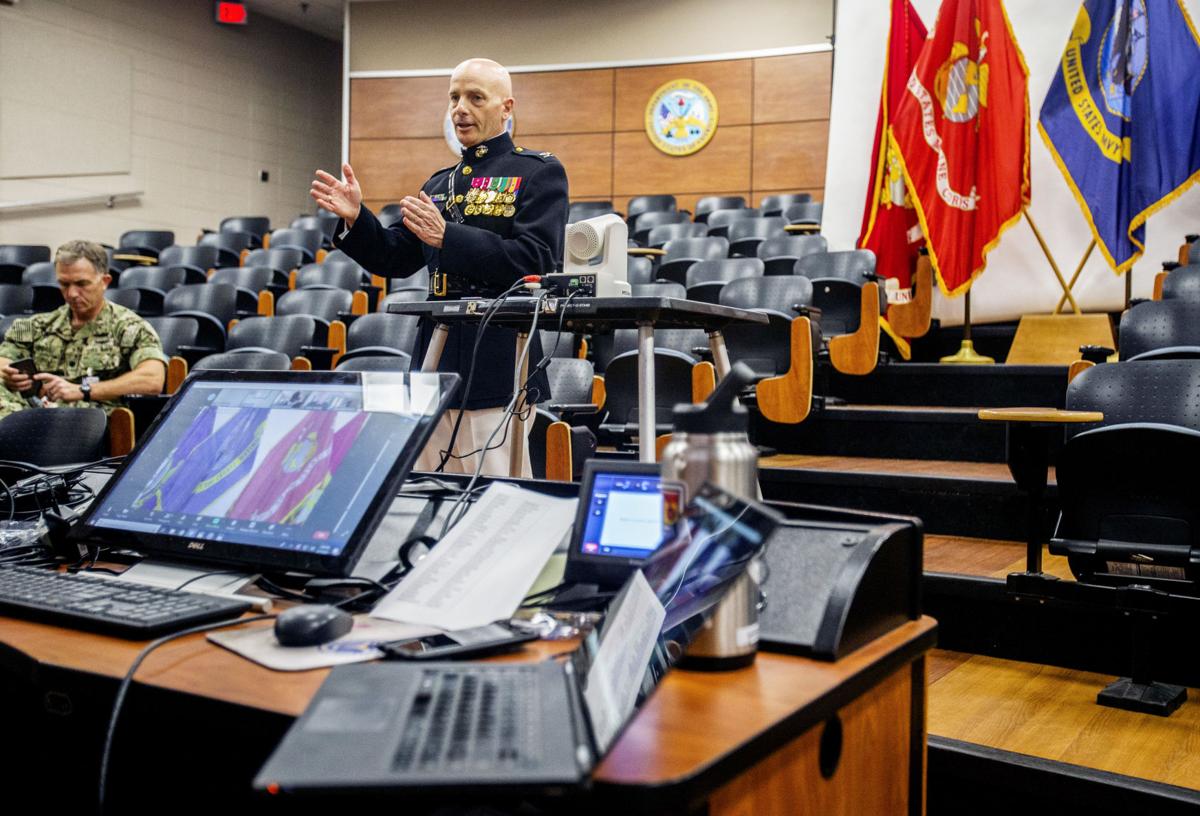 United States Marine Corps Col. Chuck Dunne goes over the program for the commissioning ceremony with The Citadel staff before speaking with Navy ROTC officers through Zoom inside Jenkins Hall on Thursday, May 7, 2020, in Charleston. Gavin McIntyre/Staff 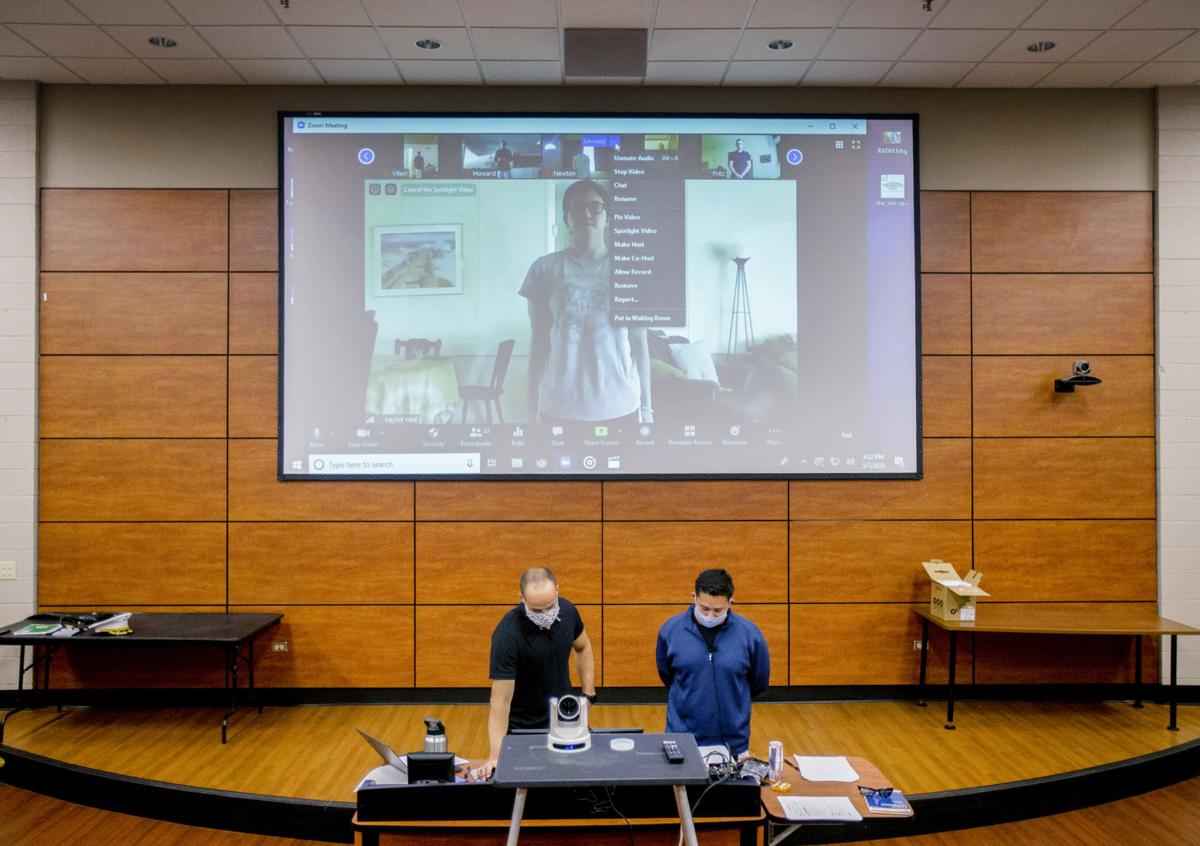 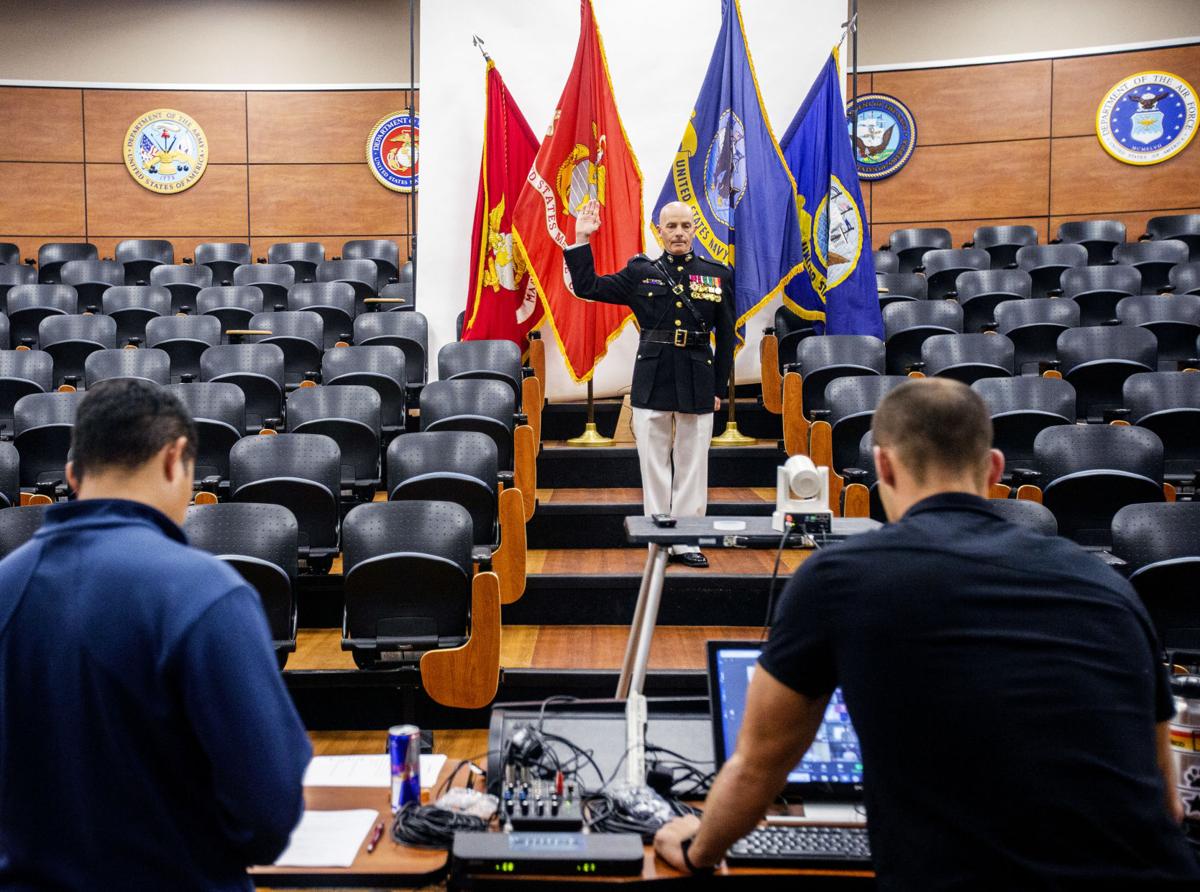 United States Marine Corps Col. Chuck Dunne demonstrates the Oath of Office to Navy ROTC officers during a virtual practice commissioning ceremony inside Jenkins Hall at The Citadel on Thursday, May 7, 2020, in Charleston. Navy ROTC officers will be commissioned into the Navy and United States Marine Corps in a virtual ceremony on Monday. Gavin McIntyre/Staff 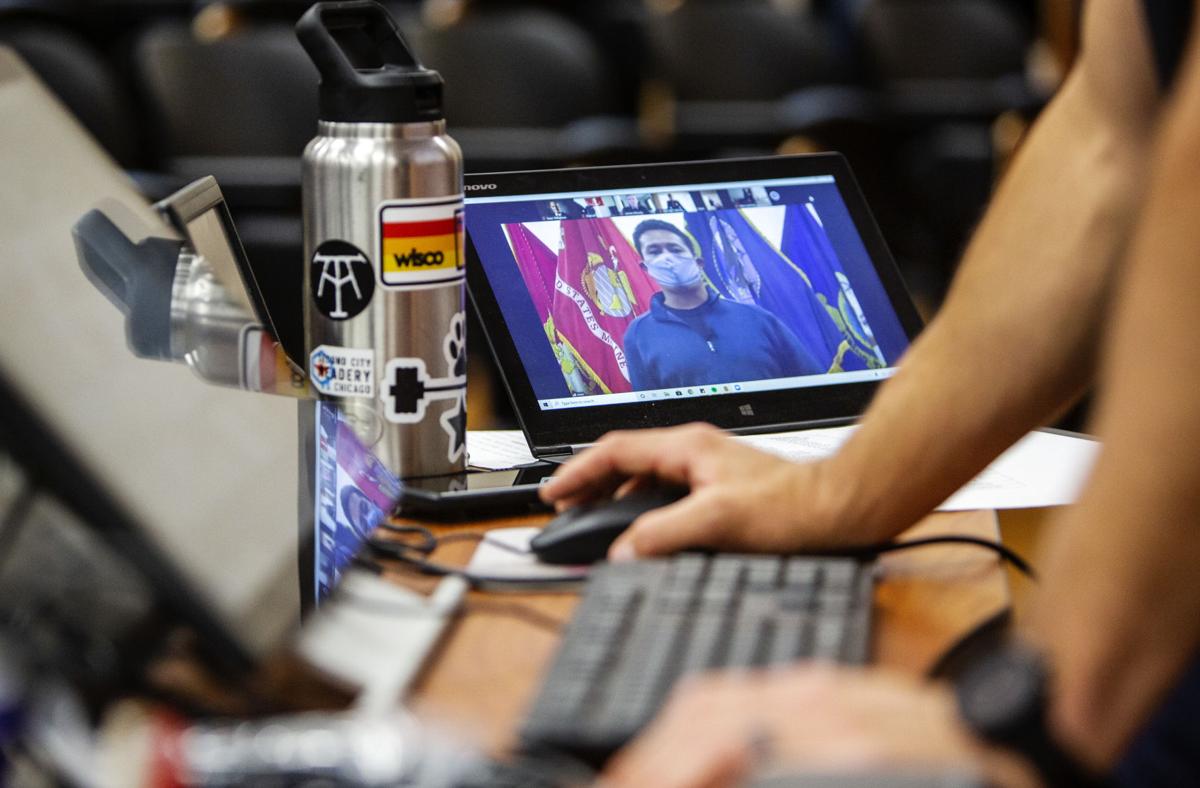 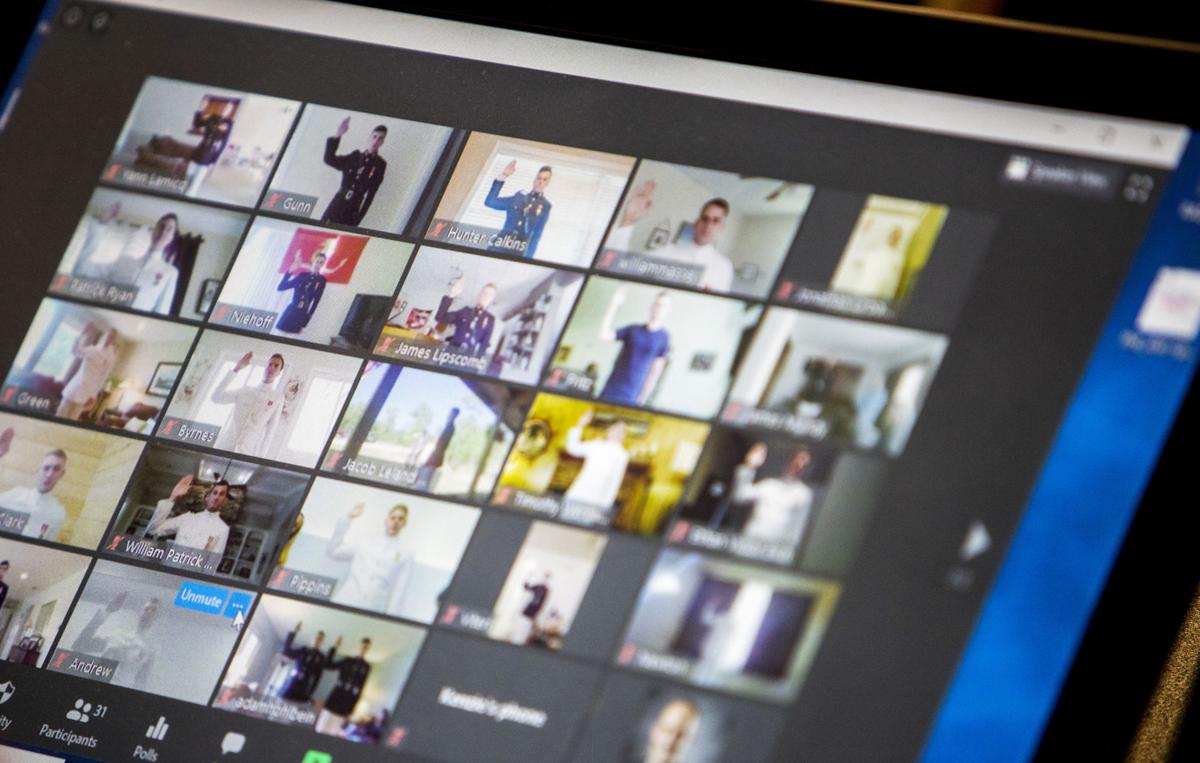 Navy ROTC officers practice their Oath of Office from home while in a Zoom meeting with The Citadel staff to go over the commissioning ceremony inside Jenkins Hall on Thursday, May 7, 2020, in Charleston. Gavin McIntyre/Staff

Adam Niehoff has focused on becoming a Marine Corps officer for the past four years.

The Citadel graduate from New Jersey lost his mother and grandparents his freshman year. But through all the personal and physical pain, he finished officer candidate school in the top 10 percent. He was a battalion commander among his classmates, and he finally commissioned as a second lieutenant this past weekend.

But the ceremony celebrating his accomplishments was different from what he imagined.

It happened in his father's apartment in the Garden State. No more than 10 people were allowed to be present because of measures on social distancing during the coronavirus pandemic. He logged onto a Zoom meeting on his computer and listened to speeches from Citadel professors and military officers in the living room.

He wanted to give his first salute to his friend, a classmate he met at The Citadel. But he couldn't. They haven't seen each other since on-campus classes were moved online March 23.

“Never in my wildest dreams would I think a global pandemic would conclude my time at The Citadel,” Niehoff said. "Now, I’m bracing for the wild ride that is life and the changes that come with it."

Celebrating the Citadel Class of 2020: Virtual commencement events and statistics

Niehoff is one of thousands of men and women nationwide commissioned this month in the Navy, Army, Air Force, Marine Corps and Coast Guard. All of these future military leaders in South Carolina and beyond have made the best of an unprecedented situation. Everything for them has changed.

The COVID-19 outbreak stopped classes at South Carolina's colleges, The Citadel being one of them. The emptied barracks at the historic military campus in Charleston were filled with Marine Corps recruits who are quarantining before going to boot camp at Parris Island, a sign of how the novel coronavirus has shifted priorities.

Amid all the difficulties, roughly 30 percent of The Citadel's graduating class commissioned in the armed services on Saturday.

It's a significant amount. Especially because it has become a rarity for young men and women to join the military in recent years.

The most recent internal Department of Defense survey conducted in 2017 showed the percentage of young people who say they will likely join the military is at 11 percent. It was the lowest point in nearly 10 years.

But cadets at The Citadel have been joining the armed forces steadily for years. The estimated 180 students who commissioned this month were prepared for the ceremony. Practice runs were done with ROTC groups on campus.

Col. John Cyrulik, a professor of military science at The Citadel, said in his prepared remarks to commissioning Army officers that their next mission will be to help find solutions.

"You have excelled at every endeavor, and our Army needs your enthusiasm, new ideas, leadership, and, most importantly, the character and values inculcated at The Citadel to help us solve the complex problems we all face today," he said.

The Citadel lags behind rival military schools in commissioning officers

Last week, the Navy ROTC program set up a dress rehearsal. Soon-to-be-officers joined a Zoom meeting where they were taught about the ceremony and the tradition. Each name was called, and the cadets would give their salutes remotely.

In his prepared remarks for the ceremony, Col. Chuck Dunne, a professor of Naval Science at The Citadel, said these will not be the only trying times these officers face.

"You leave this bastion of leadership, on the banks of the Ashley River, prepared to lead our sailors and Marines into the next challenging decades of the millennium," Dunne said. "As you face obstacles and times of crisis ahead, look to 'The Long Gray Line,' spanning 177 years for strength and example."

These officers are also entering an uncertain geo-political time in America.

Federal funding has been focused primarily on providing economic relief to the American public, which has sidelined some branches' priorities. National security experts warn that political rhetoric between the U.S. and China could escalate military tension into a Cold War. A presidential election in November could change the Department of Defense's vision.

But for Niehoff, he's trying to control only what he can.

“There’s so many uncertainties,” Niehoff said. “The fighting force is changing. And my objective is figuring out how I can be the best officer that I can be. The big stuff is above my pay grade, and I have to trust in a higher power when it comes to that."

He still hasn't given his first salute in person. He's waiting until he can give it to his friend in Charleston.

He hopes it’ll be soon.