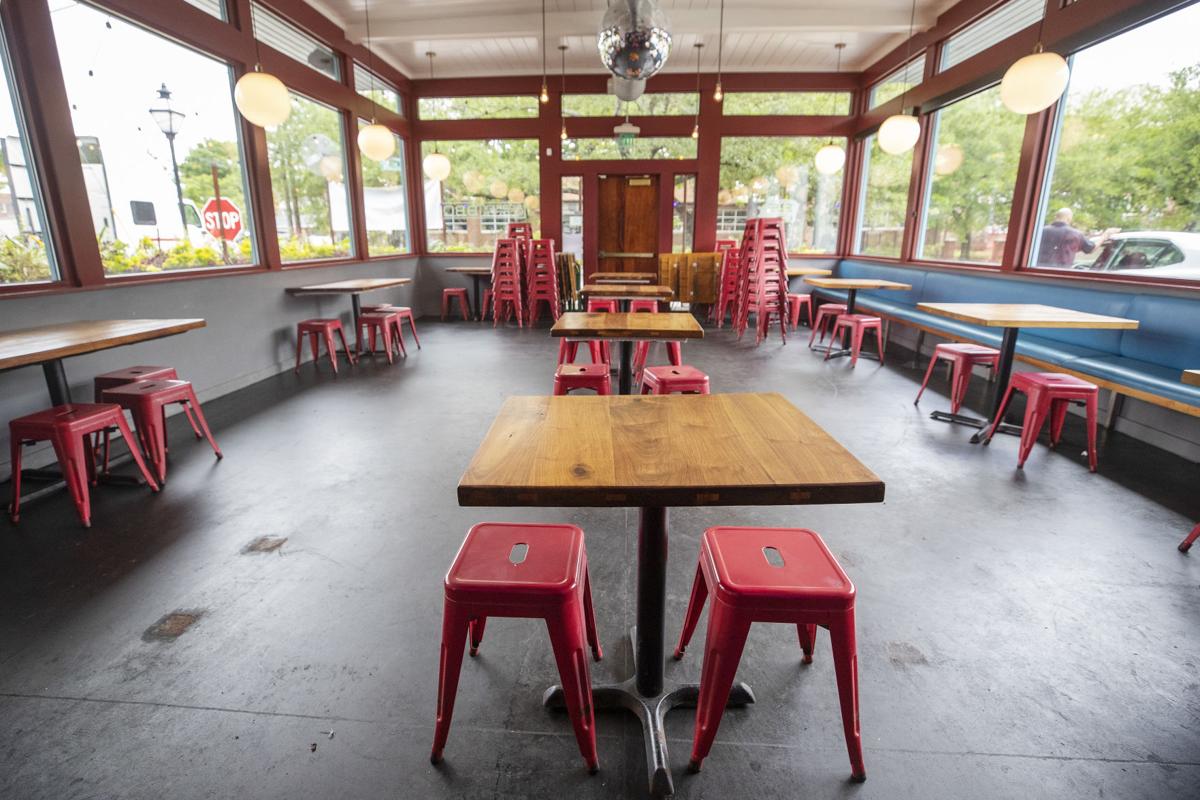 Tables at Rodney Scott's BBQ in Charleston were already moved apart on Thursday, April 30, 2020, in preparation for when Gov. Henry McMaster lifts the ban on dining inside restaurants. McMaster will allow restaurants to reopen dining rooms on Monday, May, 11. Lauren Petracca/Staff 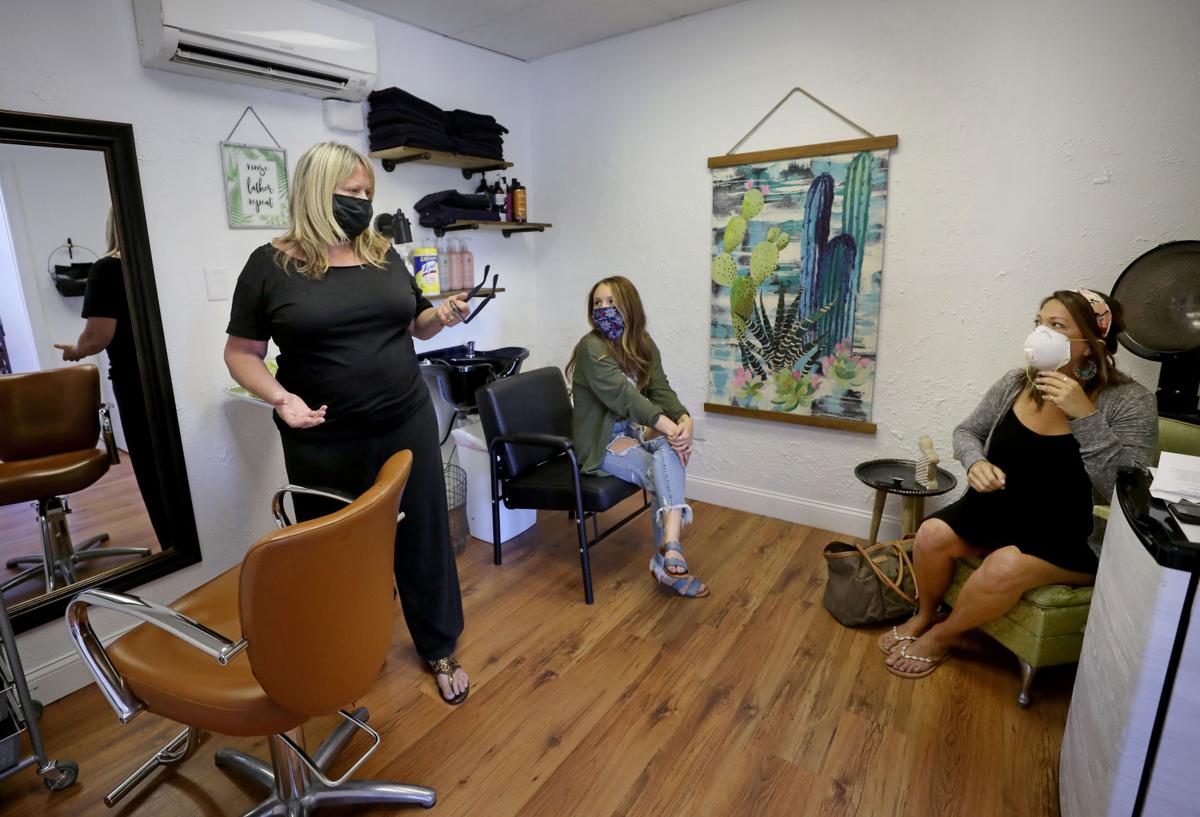 SueEllen Castros (from left) meets with fellow stylists Lauren Reibling and salon owner Jade Young at the Willow Salon on James Island Thursday, May 7, 2020, to discuss changes that will be made when hairdressers reopen. The salon, which employs four stylists, will have customers wait in their cars or outside in chairs until their scheduled appointments and have disinfectant and hand sanitizer available throughout the shop. Grace Beahm Alford/Staff

COLUMBIA — Restaurants across South Carolina on Monday can reopen their dining rooms, which almost two months ago were closed by Gov. Henry McMaster in hopes of containing the coronavirus.

McMaster on Friday wiped out his earlier order, allowing restaurants to again welcome guests without restriction, although he strongly urged their owners to comply with guidelines prepared by the South Carolina Restaurant and Lodging Association.

Those guidelines, issued in conjunction with the reopening of outdoor dining this past Monday, suggest restaurants operate at no more than 50 percent of permitted occupancy.

They also recommend spacing tables at least 6 feet apart “if possible,” limiting tables to eight people and rearranging bars and waiting areas to create 6 feet of space between guests.

"This virus still presents a serious threat to South Carolinians, but I have faith in the people of our state and their ability to act responsibly and in the best interest of the communities they live in,” McMaster said in a statement announcing that the return of dine-in service was just three days away.

McMaster said he would likely address reopening gyms and salons on Monday.

Restaurants were the first businesses McMaster ordered to close to try to stem COVID-19 infections. His March 17 order also banned gatherings of more than 50 people at publicly-owned sites and came one day after schools statewide were forced to shutter.

Mandated closures and limitations on travel and outings increased as confirmed infections climbed. But McMaster began rolling back restrictions April 16 by reopening boat landings and ramps, while still barring tie-ups, beaching and more than four people in the same household on the same boat.

His order Friday also ends those remaining boating restrictions, effective immediately, with one caveat. McMaster noted law enforcement officers can still arrest people in groups posing a threat to public health, "whether that's three or 23 or 103."

In late April conversations with restaurant industry leaders, McMaster had pressed them to consider reopening in time for Mother’s Day, but his suggestion was rebuffed on the grounds that restaurateurs needed more time to restock their inventories, recall and retrain employees and obtain the supplies needed to keep their workers and guests safe.

McMaster's coronavirus reopening advisory group also concluded it would be a bad idea to resume inside dining for what's typically one of the industry's busiest days of the year.

Brooks Reitz of Charleston-based hospitality group Neighbourhood, which includes Leon’s and Melfi’s, said earlier this week that decided against reopening his restaurants, despite having ample and attractive patio space, because the sped-up timeline struck him as at odds with proper hospitality.

“There are currently too many unknowns and too many gaps, many with potentially serious downsides, for us to feel comfortable opening at this time,” he said, adding that it would take weeks to experiment with seating schemes to maintain social distance and reservation systems to eliminate lines.

Of the opportunity to reopen, Reitz said, “Just because we can, doesn’t mean we will.”

Michael Shemtov of Charleston's Butcher & Bee, who also declined to open patio seating immediately after it was greenlighted, earlier this week said, “Almost every restaurant owner I know would like a few more weeks.” He's planning to convert the restaurant's patio into a picnic area for takeout orders in the coming days.

Jessica Shillato of Columbia’s Spotted Salamander this week decided against reopening her lunch café out of concern for her employees' safety. "I’m nervous about people," she said. "Some people, they just don’t care about other people’s safety and wellness.”

While she initially thought the reopening announcement was too soon, she said talking with other business owners made her more sympathetic to the short notice.

“If they don’t open now they will lose their business,” she said. “Like I said, I’m on the fence about it, I just feel really bad about those that have to reopen to survive.”

By Monday, 21 states will have reopened restaurant dining rooms with varying degrees of restrictions. South Carolina is one of only six states permitting patrons to sit at bars.

Texas and Florida both capped restaurants at 25 percent of occupancy, but S.C. restaurant association president Bobby Williams said his group recommended the 50 percent figure because those owners held to 25 percent capacity "are just dying on the vine."

The question remains how many people are eager to dine out while COVID-19 is still raging, with a daily national death toll in the four figures. Novelty, pleasant weather and the Cinco de Mayo holiday helped populate Lowcountry patios earlier this week, but a study released Friday by research firm Datassential shows 55 percent of Americans would "definitely avoid" going to restaurants if given the chance.

When Charleston City Council on Wednesday discussed whether to turn the state’s restaurant guidelines into an ordinance, which would allow the city to enforce its provisions, councilman Peter Shahid pointed out that reopening restaurants alone won’t ensure a steady flow of business to them.

“You can open a door, but you (need) a mechanism for consumers to feel comfortable coming back to that establishment,” he said.

Reitz's decision to keep his restaurants dark for another month stemmed partly from a lack of confidence in the measures contributing to that mechanism.

“We are waiting on specific requirements in terms of health, capacity and protocols," he said. "They remain too fluid, and we need the city and state to be in lockstep."

Council is slated to take up the topic again at its Tuesday meeting.

Salons, gyms, religious services may look different when they reopen in SC. Here's how.

Absent a local ordinance, restaurant owners are unlikely to face sanctions if they don't abide by the guidelines, which McMaster referred to as "suggestions" and "recommendations." He said the state is counting on restaurant owners to "do something about it" if they witness "dangerous conduct."

"If law enforcement sees a situation where courtesies are not being taken, they can step in and disperse the crowd and, if necessary, issue citations," he said. "They’ll know it when they see it."

Asked if reopening restaurants at this point is safe, State Epidemiologist Linda Bell stressed that South Carolinians must continue to practice social distancing, regardless of whether they're seated in a restaurant.

"There is concern that the virus will spread if we don’t wear masks," she said. "As the openings are occurring, we see people participating in behaviors we know put them at risk: Face-to-face contact with someone without a mask puts you at risk."

Businesses that must remain closed include gyms, salons, tattoo parlors and other businesses that require people to be in close contact, although McMaster said he would likely address them on Monday. He earlier this week said he recognizes that people are ready for a professional haircut.

Hairstylists were hoping that announcement would be Friday. “We’re ready,” said SueEllen Castros, one of four stylists at Willow Salon on James Island. “People are banging down the doors at this point.”

She’s been booking appointments on the hope she can reopen her doors.

“I’m totally booked next week,” she said. Now she’ll again have to postpone her bookings by another week.

She said it’s not fair that other businesses can open their doors and she can’t.

Her salon is set up for greater-than-suggested spacing between clients. She and her colleagues are ready with masks, wipes and sanitizer. And new capes for customers are just waiting for the customers to be able to walk in, she said.

“We need to get back to work,” she said. “It’s been almost six weeks.”

Becky Baker of Myrtle Beach said she’s repeatedly written McMaster to push for the reopening of salons. The 75-year-old said the inability to get her hair cut once a month, as usual, has sent her into serious depression.

“My hair grows like a weed and it just looks terrible. There's nothing I can do with it,” she said. “This is not a vanity thing. … I want my beauty shop opened!”

She said she recognizes her age puts her at higher risk of developing complications from COVID-19, but she considers herself a germophobe anyway and is careful to wear a mask and keep sanitizer handy.

“As long as things are clean, I’m not worried about it,” Baker said. “And at this point in my life, I just want a haircut.”

David Clarey contributed to this report.