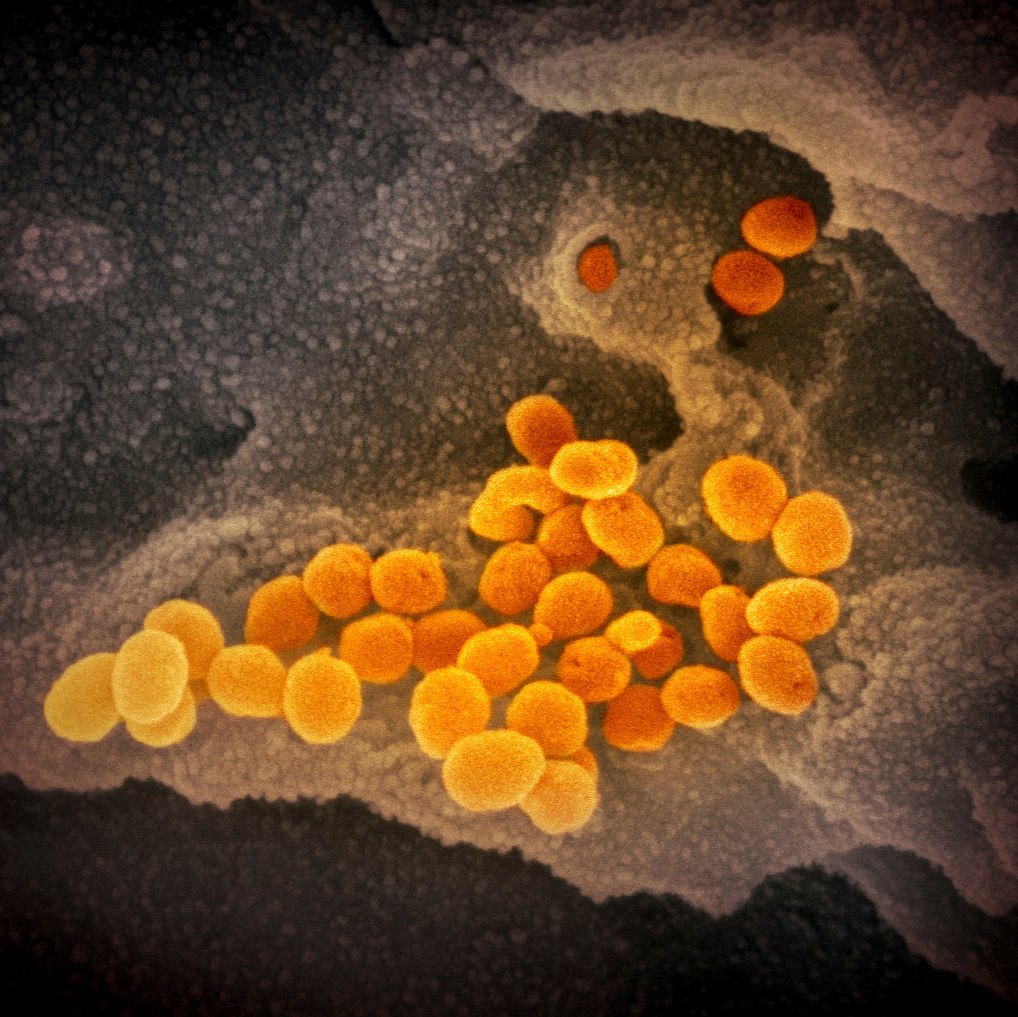 This undated electron microscope image made available by the U.S. National Institutes of Health in February 2020 shows the novel coronavirus SARS-CoV-2. Also known as 2019-nCoV, the virus causes COVID-19. The sample was isolated from a patient in the United States. File/NIAID-RML via AP 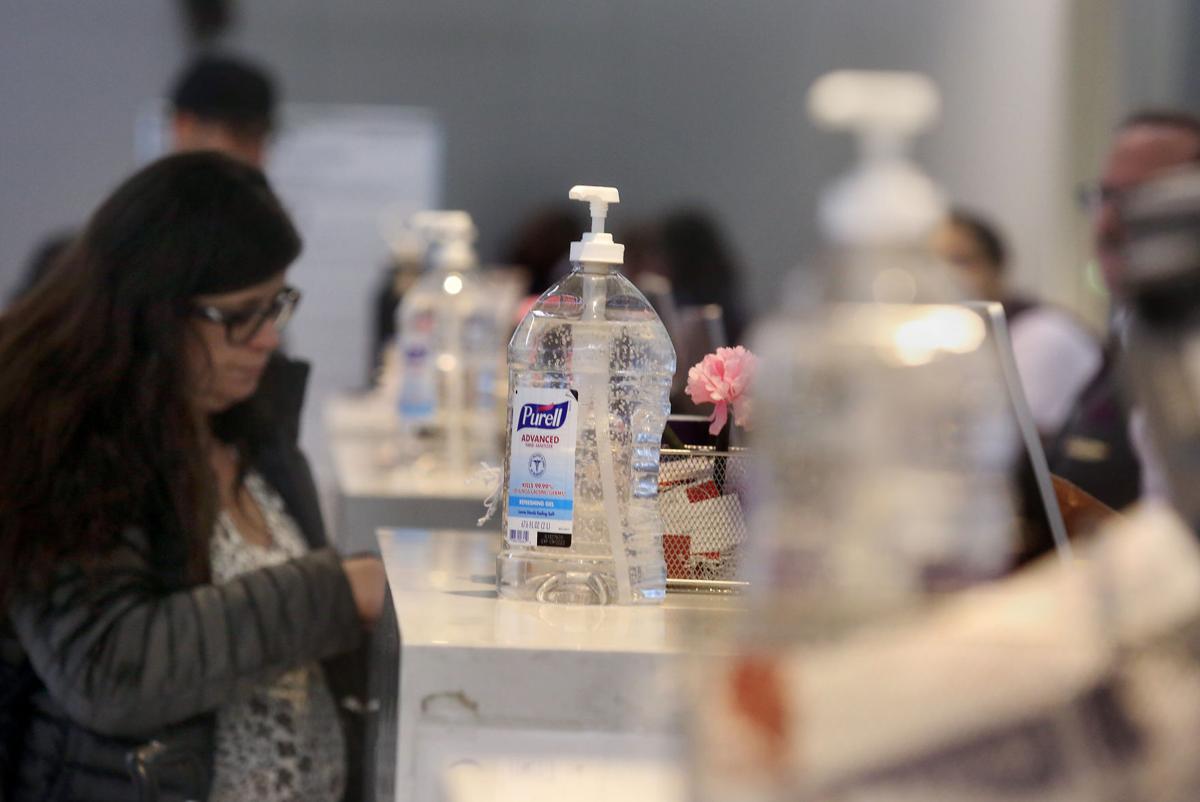 Charleston International Airport has put hand sanitizer at all airline check-in counters for passengers to use as a precaution against the coronavirus. Brad Nettles/Staff

The agency conducted both tests, which yielded positive results, and expects the Centers for Disease Control and Prevention to officially confirm the diagnoses over the weekend.

The patient from Kershaw is an elderly woman who has been hospitalized and is in isolation. The S.C. Department of Health and Environmental Control does not know how the woman contracted COVID-19. She remains hospitalized and has no known travel history.

“She has no other known exposures,” said Linda Bell, DHEC’s top epidemiologist. “This is still new and as we learn more we will continue to update you.”

What Charleston residents should watch for as coronavirus spreads globally

Bell would not comment on the woman's condition or predict if she would make a recovery.

"That’s unknown," Bell said. "I can’t make predictions like that."

The patient in Charleston County is a staff member at the Medical University of South Carolina, though she did not return to work after a trip to France and Italy, spokeswoman Heather Woolwine said in a statement.

The MUSC team member self-quarantined and did not require hospitalization. She had a mild illness and has not had any symptoms for three days.

Bell did not know if the Charleston patient traveled through Charleston International Airport.

"We don't have that information," she said.

Federal health care law prohibits the agency and MUSC from disclosing any identifying information about patients.

DHEC confirmed both patients are being isolated and their close contacts have been identified to prevent further spread of the disease. Bell said the virus poses a low risk to South Carolina residents and underscored that the public should not panic.

“We encourage the public to remain calm,” she said.

The patient in Kershaw presents a unique challenge for the state health department because most cases identified in the United States have been linked to specific geographic areas where the virus has already spread. On Feb. 28L, a California patient garnered significant national attention because she had no known exposure to the disease.

"This is not a time to panic, but to be smart and take precautions that one normally would to prevent the spread of illnesses," Funderburk wrote.

DHEC has identified two possible cases of COVID-19 #Coronavirus in SC. One is in Kershaw County. This is not a time to panic, but to be smart and take precautions that one normally would to prevent the spread of illnesses. #washyourhands https://t.co/zV40bhvqTm

The news of the presumed South Carolina cases comes as the number of domestic cases in the U.S. appears to have spiked late Friday. As of Friday night, infections in the country numbered over 200, according to The Associated Press.

Charleston Mayor John Tecklenburg said Friday night that city officials' concerns were with the two patients and their families, and that officials were "confident in DHEC's testing procedures, which have worked well in these cases."

"We appreciate the fine work being done by our state's public health professionals and will continue to follow their guidance as this situation evolves," Tecklenburg said.

Gov. Henry McMaster said Friday evening that “health care authorities in South Carolina have been preparing for this eventuality and there is no reason for public alarm."

DHEC "is working with the CDC on confirmation for these cases. South Carolinians should continue to follow recommendations and information provided by official sources."

A media briefing with McMaster and state public health officials is scheduled for Saturday morning at the South Carolina Emergency Operations Center in West Columbia.

DHEC reported Friday that 54 people in the state had been asked to self-monitor for coronavirus symptoms since January. Most of those people have already completed the two-week program. As of Friday, 18 were still regularly checking and reporting their symptoms. Eight people have tested negative for the virus.

On Friday, prior to DHEC's announcement, the Charleston County Emergency Management Department held a conference call with tri-county authorities, first responders and health officials to discussed preparedness and precautionary measures.

"Out of an abundance of caution to protect public safety crews and limit exposure to the spread of any type of virus, we have added some additional questions to our Consolidated 9-1-1 Dispatch Center protocols," Charleston County Consolidated 911 Center Director Jim Lake said in a statement. "In order to better direct public safety personnel, dispatchers will ask additional screening questions on patient calls related to respiratory problems and illness."

The novel coronavirus, formally called COVID-19, is marked by flu-like symptoms, including coughing, fever and shortness of breath. While most patients who have contracted the disease recover within a short time frame, the virus has accounted for more than 3,300 deaths worldwide, including 14 in the United States. Most of domestic fatalities associated with the virus have been linked to an outbreak inside a Washington state nursing home.

Globally, the vast majority of coronavirus cases and deaths have been reported in China, where public health officials believe the virus originated late last year.

The Spanish flu hammered Charleston a century ago. What lessons does that pandemic offer?