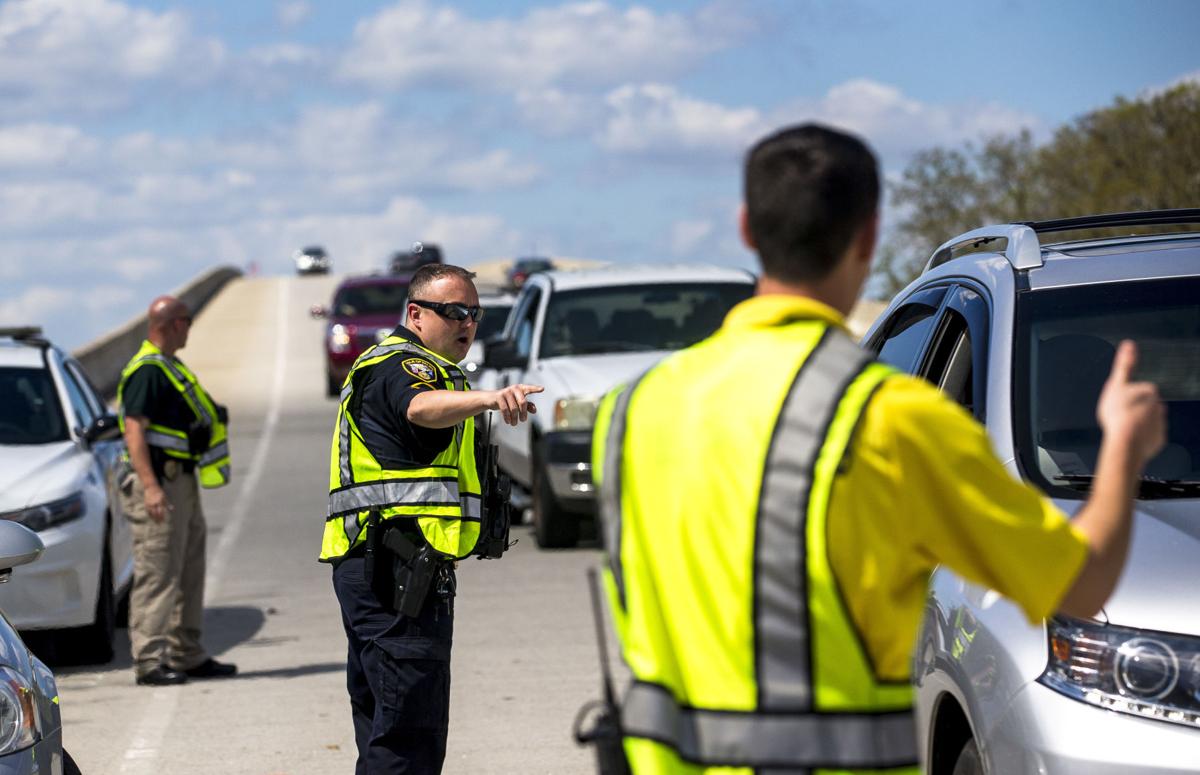 Isle of Palms police stop each vehicle entering the island off the Isle of Palms connector on Wednesday, March 25, 2020. Andrew J. Whitaker/ Staff 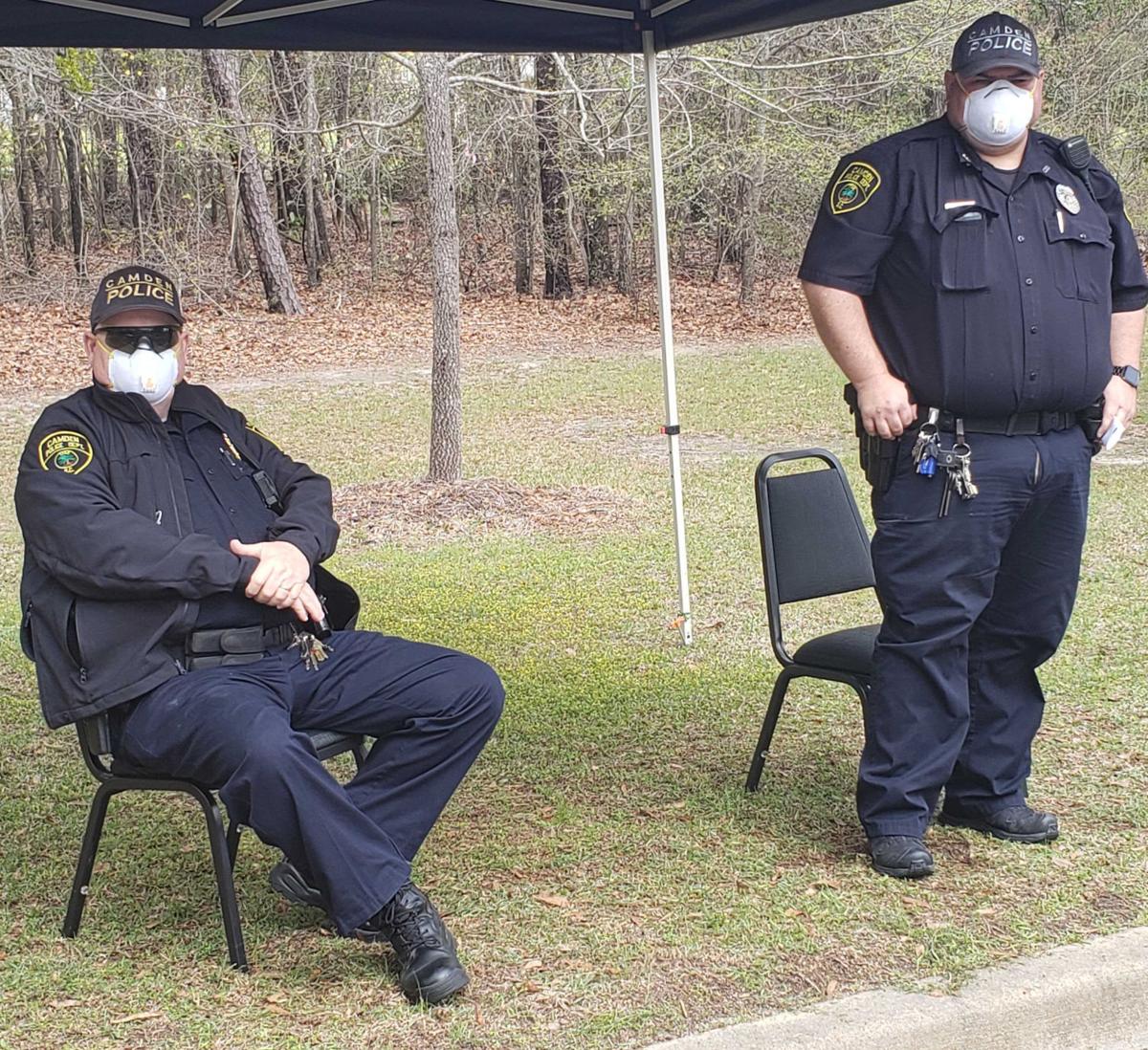 Camden police officers on Wednesday donned masks and other personal protective gear as they monitored a checkpoint set up for drive-thru testing at the Kershaw County Mental Health Center. Adam Benson/Staff

After widespread complaints that a lack of access to information and testing was putting South Carolina’s first responders in harm’s way, state health officials announced new measures Wednesday aimed at protecting emergency workers as they encounter the coronavirus.

The S.C. Department of Health and Environmental Control moved to assuage concerns after the S.C. Association of Counties wrote Gov. Henry McMaster late Tuesday pleading for assistance during the crisis.

The counties said they want the state to release more information on those infected with the virus in their communities so first responders won't be "flying blind" when racing to calls at those addresses. The association also asked that testing be expedited for first responders so paramedics, firefighters and law enforcement officers don't have to be sidelined for two-week quarantines at a time when people need them most.

Tim Winslow, the association's executive director, said the letter to the governor "wasn't intended to be a slam" on DHEC's efforts.

"It was an urgent need," he said. "The idea is we can’t wait two days for anything anymore."

On Wednesday, DHEC said it would grant special priority status to first responders who seek testing. But local officials said barriers to accessing those tests remain in some places and it's still unclear whether workers who suspect they were exposed to the virus can be evaluated if they don’t show symptoms.

The public health agency also said it will continue to shield detailed information on the locations of infected individuals.

Local officials contend they need that information to flag first responders to calls that carry a risk of infection. But state health officials said the agency must balance the need for precaution with its duty to "uphold its lawful obligations to protection of individual privacy."

DHEC had been releasing case numbers by county only. In response to the association's concerns, the agency agreed to share a breakdown of cases by ZIP code.

Vic Carpenter, administrator of Kershaw County, home to the state’s largest known outbreak, said that information will be “useless.”

"It's the same thing as nothing," Carpenter said. He and other administrators noted that South Carolina ZIP codes contain thousands of people and hundreds of square miles.

Marlboro County Administrator Ron Munnerlyn said the health agency’s reply was “a waste of paper” and an insult to the counties.

DHEC officials have maintained that federal health privacy laws largely prevent them from disclosing more information. But local officials contend that exceptions can be made.

In a letter to McMaster on Monday, Florence County Administrator K.G. "Rusty" Smith, Jr., argued that state health officials already share some information regarding tuberculosis patients, "so why can't they follow the same protocol on this?"

SC’s first coronavirus cluster highlights the importance of tests, but they’re hard to get

Like those in many counties, Dorchester County dispatchers have screening questions in place to ask if a person has tested positive for the coronavirus. But that means they have to rely on callers being fully honest before sending workers into harm's way, county spokeswoman Tiffany Norton said.

"There’s no reason why we shouldn’t be equipped with the most accurate information at all times," she said. "Dispatch centers are already vetted to receive highly sensitive information."

Emergency officials have also been growing frustrated in recent days with having to wait in line with the general public for testing, which has been lagging statewide. The wait time meant paramedics, firefighters and law enforcement officers could be taken off line for 14 days of quarantine, depleting staffing in a crisis, county officials argued.

Munnerlyn said he has fewer than 30 emergency medical service personnel to man the ambulance service for his rural county of about 26,000 people. If he can’t quickly test crews who show symptoms, he will be forced to have them wait out the incubation period, potentially impacting the ability of ambulances to respond to calls, he said.

“We are already struggling with the limited availability of paramedics,” he said. “And we are no different than a lot of rural counties.”

DHEC identified four sites where first responders could get priority testing and pledged a quick turnaround on results, but the closest site to Marlboro is two hours away in Myrtle Beach, Munnerlyn said. He and others contend the agency should use its powers to push for broader and quicker testing for emergency workers at hospitals across the state.

At the moment, counties are forced to freelance their own solutions with local medical providers, creating a patchwork approach across the state that often leaves rural areas missing out.

“In a crisis like this, we need leadership and we’re not getting that,” he said.

Urban metro areas such as Charleston have more hospitals and more options. The Medical University of South Carolina, for instance, has been working to ensure the Holy City's first responders are tested and get their results back as quickly as possible, often within 48 hours, city spokesman Jack O'Toole said.

But it's a different story in the less populated corners of the state.

Marion County Administrator Tim Harper said his county of 31,000 had its first confirmed positive case Tuesday. The individual had been transported to the county’s lone hospital last week by one of Marion’s three ambulance crews.

The county first learned of the positive diagnosis from the hospital. DHEC didn't officially announce the case until late Wednesday afternoon.

“We didn’t even know the person had been tested,” Harper said.

Marion officials now have to huddle and determine what steps to take with the ambulance crew exposed to that person, as well as how to get them tested if needed.

In Kershaw County, paramedics work in pairs out of the county’s total of five ambulances and two other quick-response vehicles.

Two of those crews have already each had a paramedic sidelined after they came in contact with someone who later tested positive for the virus.

Both paramedics were quarantined and have since returned to the job, said Gerald Blanchard, Kershaw’s director of emergency medical services.

Kershaw has 39 emergency medical workers and 10 full-time firefighters. The county also relies on 15 other firefighters who work part-time or volunteer. The county has stopped sending its firefighters on medical calls, unless paramedics request their assistance.

Carpenter stressed the need to test first responders who suspect they came in direct contact with the virus, even if they don't show symptoms. "If we're able to get them tested and, say, after four days you’re cleared — we got them back 10 days early."

"If you’re showing symptoms, of course you’re going to stay home," he said.

In a statement Wednesday, DHEC indicated it was dedicated to getting testing for first responders and will equip them with as much information as possible. The agency also noted that many more people have the virus than will show up in testing data, so emergency workers should not rely on that alone.

"This is a rapidly changing situation and the type of information and the way it's reported may change to align with the overarching goal of protecting public health," agency spokeswoman Laura Renwick said.

No one knows how many coronavirus tests are being run in SC, even as efforts ramp up