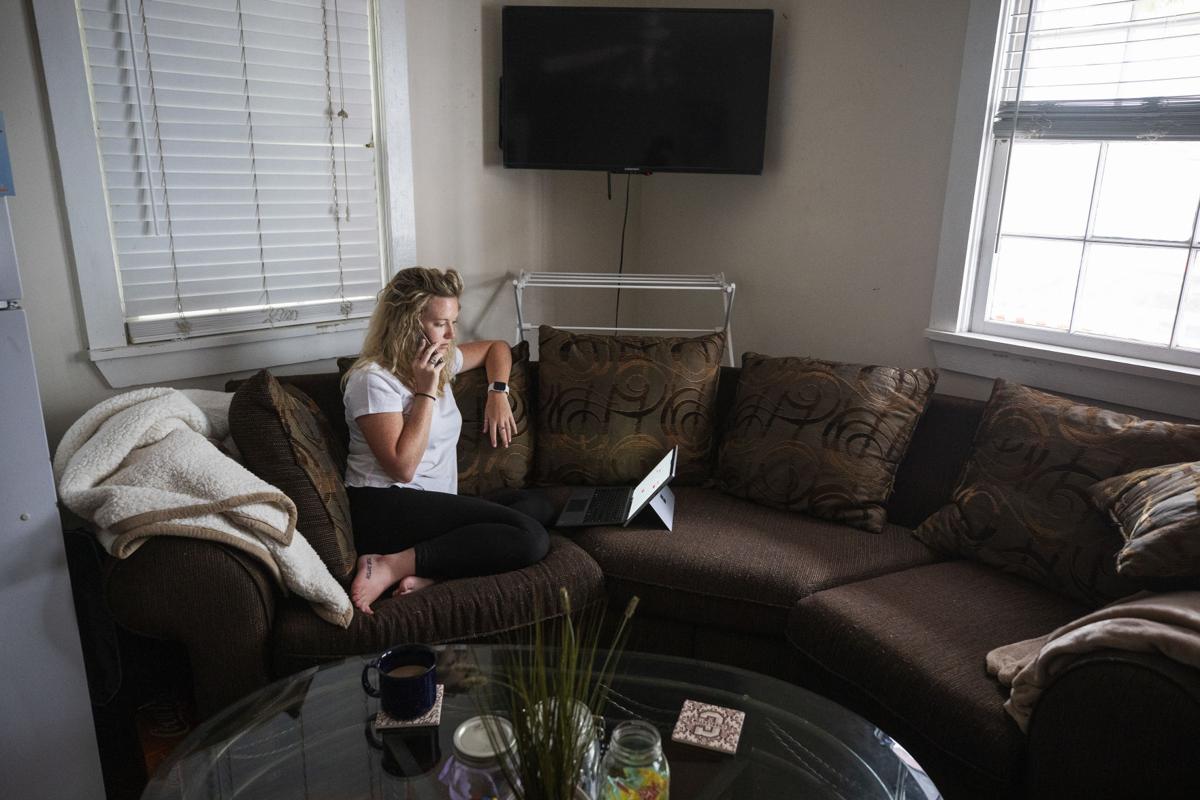 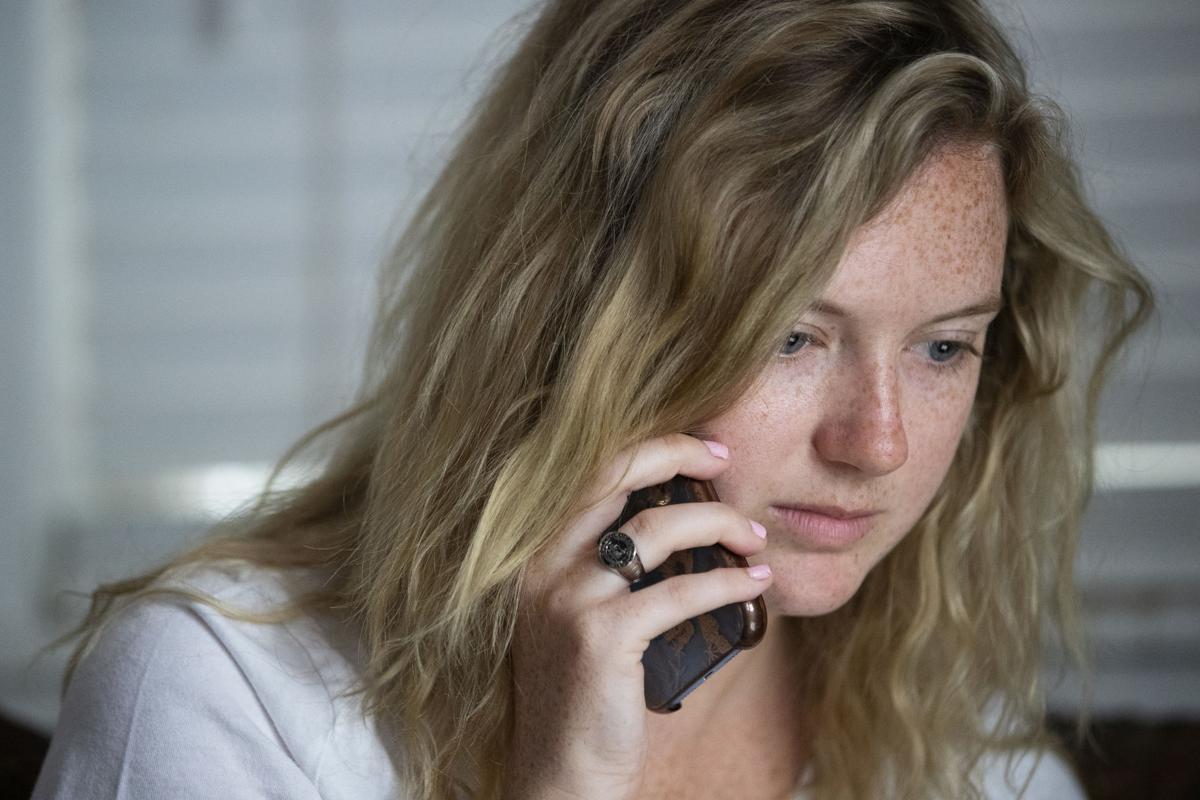 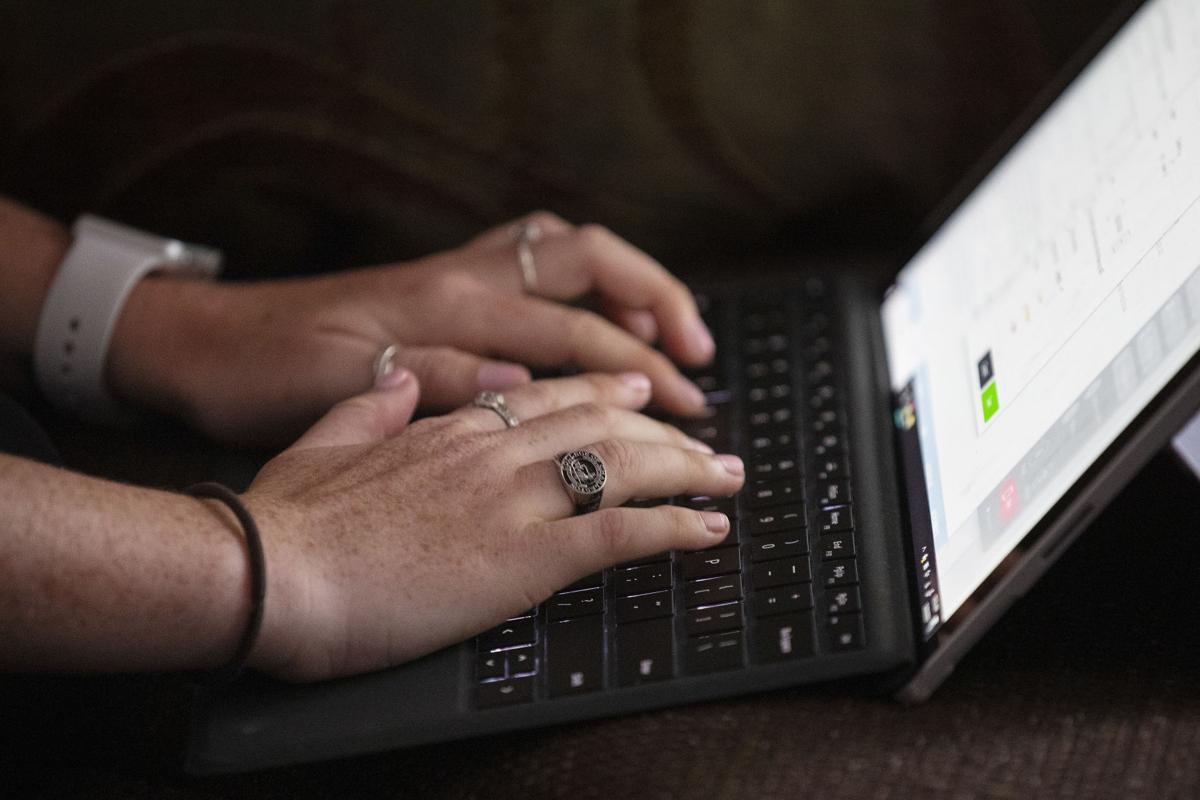 Mary Cathryn Pope, a recent College of Charleston graduate, types on her computer as she works part time for a real estate company from her apartment in Charleston on May 20. Lauren Petracca/Staff

Mary Cathryn Pope, a recent College of Charleston graduate, types on her computer as she works part time for a real estate company from her apartment in Charleston on May 20. Lauren Petracca/Staff

Everything seemed like it would come together as Mary Cathryn Pope began her last semester at the College of Charleston.

Pope, a South Carolina native, was ready to finish up her two degrees in business administration and hospitality and tourism management. She was still working for a marketing company in Charleston, where she’d interned the previous summer.

And she was setting up other job interviews almost every week — ready to make the leap from college into her early career.

The unemployment rate in South Carolina and the rest of the country was at or near historic lows not too long ago. Companies were competing for skilled workers. Pope fully expected to have a full-time job lined up before she accepted her diploma.

But all of that changed as the novel coronavirus took hold in the United States and segments of the American economy were put on hold.

Pope’s college courses were moved online. The interviews she was scheduling with potential employers began to disappear. The company she interned with explained that it no longer needed her.

Her hopes of making a seamless transition from college into the workforce began to fade.

“I was definitely expecting to have that part of my life figured out. I am a huge planner,” Pope said. “This is definitely a disruption for me.”

Pope’s story is a familiar one right now. College and university graduates across the country watched this year as a healthy economy was brought to its knees amid the pandemic.

Businesses announced furloughs. Some followed up with more permanent staffing cuts. And millions of Americans signed up for jobless benefits in the worst unemployment crisis since the Great Depression.

The prospects for this year’s graduates shifted almost overnight. Job advertisements began to disappear from websites. Some companies began retracting job offers they already made. And graduates were suddenly competing with more experienced employees who had lost their jobs.

Pope is hopeful that the current downturn in the economy will only be temporary. She’s waiting to see if businesses can rebound later this year.

So are many others.

The coronavirus is injecting even more stress into an already uncertain time in many graduates' lives. Finding a job after college can be hard enough under normal circumstances, but the speed at which the pandemic changed everything caught many seniors off guard.

Kelly Polte, a Chicago native, said she left Clemson University for spring break with few worries. She planned to finish out her coursework on campus and find an entry level job in the food industry, where she could help develop new products.

She didn’t expect any problems marketing herself with her food science degree and minor in chemistry. In fact, she’d been in contact with several major companies before Clemson’s campus shut down.

"I was on track. I was submitting applications. I was hearing back from human resource departments and then it all changed,” Polte said. “Now I can't get anyone to respond to my emails."

Polte understands that many companies are currently trying to straighten out their finances, and in some circumstances are being forced to layoff employees they already had. But that doesn’t make the rejection any less difficult.

The lack of immediate job opportunities, however, isn’t the only concern that some graduates are dealing with right now.

Tyshaundrea O’Banner, a computer science major at South Carolina State University in Orangeburg, also had to cope with both of her parents being out of work as she was finishing up school.

Her father is a barber and her mother is a hair stylist, which meant both of them lost their income as South Carolina implemented emergency health restrictions in order to slow the spread of the virus.

O’Banner, who grew up in Hampton County, juggled that economic uncertainty within her family while she tried to plot her own path.

She is currently enrolled in an internship program with a software company in Columbia. But that position only lasts until August, and she has no idea if it will turn into a full time job.

“The class of 2020, we definitely know how to adapt,” O’Banner said. “We have already been through a lot of stress and emotion."

With so much turmoil in the job market, colleges and universities are doing what they can to support their former students.

Neil Burton, an executive director at Clemson’s Center for Career and Professional Development, said his staff consulted with a large number of students in recent weeks who feel dejected.

Some are striking out completely when it comes to job applications. Others thought they had positions locked in, only to have the offers revoked.

"As soon as we get them on the phone or on a Zoom call, the first thing we have to do is repair their self-confidence," Burton said. “The competition is intense.”

It’s easy for the graduates to take a rejection personally, Burton said. That’s why his team is there to remind them that being turned down for a job right now has little to do with their qualifications or experience.

“You have to be resilient,” he said. “That dogged persistence is going to be something that will carry them through.”

Burton and his team have recently set up several online events with Clemson alumni who came out of college during the Great Recession in 2008 and 2009. Those events, Burton said, allow the new graduates to gain some perspective about what it is like to start your career during a serious disruption in the economy.

It also gives this year’s graduates hope, Burton said. It shows them that the alumni who graduated amid the last recession have still been successful, though it may have taken them a little longer to achieve their career goals.

It helps to know that someone has been in your shoes before, Burton said.

Networking amid the pandemic

Of course, this year’s graduates are facing unique obstacles that didn’t exist 10 years ago.

Career fairs and industry conferences aren’t taking place during the pandemic. And many employers are not conducting in-person interviews.

That leaves graduates like Dylan Erikson, a North Carolina native, with few options for building up his professional connections.

Erikson, who studied psychology and political science at Clemson, planned to apply to government, policy and research positions in Washington, D.C. this year. He wanted to gain some experience before considering law school, he said.

But he’s finding it extremely difficult to develop relationships during the public health crisis. He’s fallen back on Clemson’s alumni network, his former internships and family connections to try to find job opportunities. But that only gets him so far.

"Networking isn't something I'm super strong at,” he said. “I'm personally trying to get better at that, but it's a strange environment to be trying to learn that skill.”

DeAndre Sellars, a South Carolina State graduate, is confronting some of the same issues.

Sellars had an entry-level job with an insurance company lined up earlier this year. He’d met representatives from the company at the University of South Carolina’s African American Leadership Conference in February, and was fully prepared to move to Georgia after graduation.

But by March, the company informed him that it was putting the position on hold.

Since then, Sellars moved back to Washington, D.C. where he grew up. He accepted a temporary job at an Amazon warehouse and is volunteering for a local political campaign. The campaign doesn’t really utilize Sellars' business management degree, but he sees it as another opportunity to get his name out there, he said.

“I'm a level-headed person when it comes to this,” he said. “Wherever I go, there is opportunity to grow.”

That's likely the attitude many graduates will need right now.