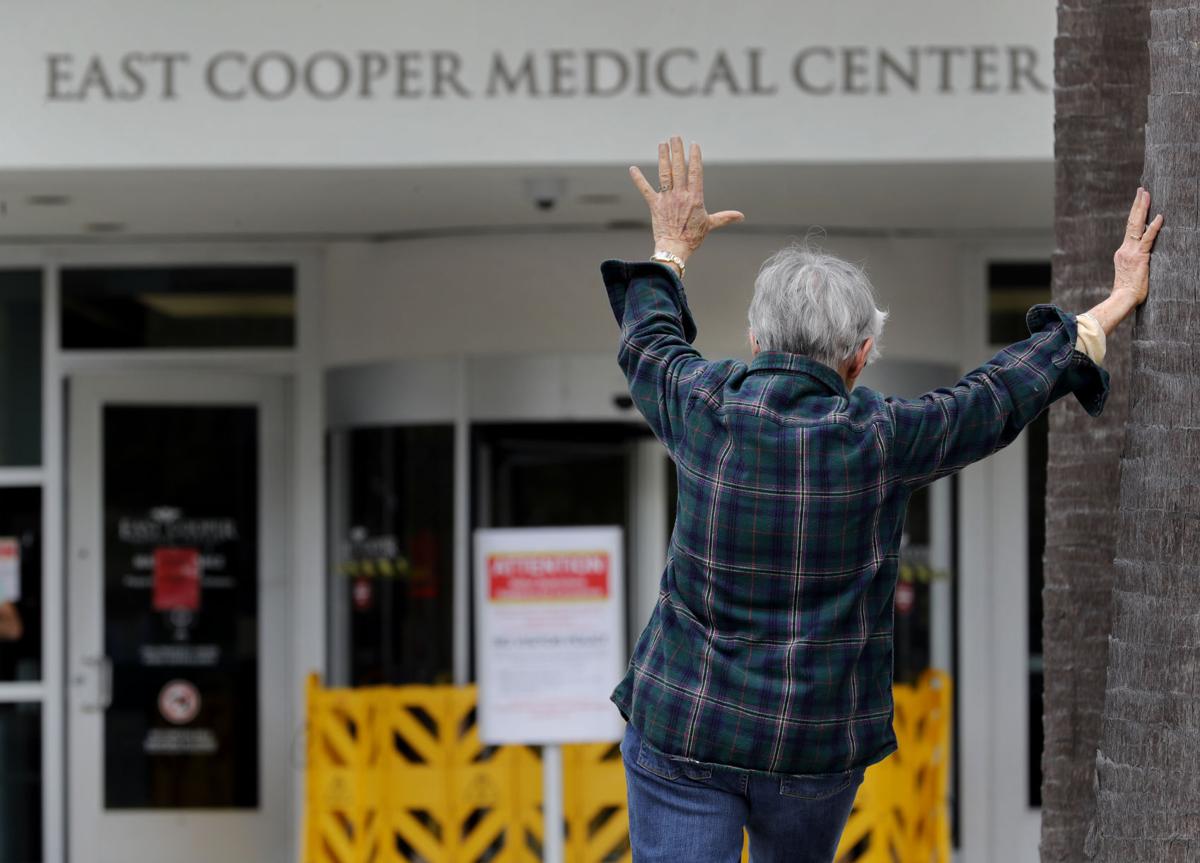 Carole Thomas raises her hands in prayer outside to East Cooper Medical Center to pray for Bishop Steve Wood, rector of St. Andrew’s Church who has tested positive for the coronavirus and has been admitted to the ICU Monday, March 23, 2020, in Mount Pleasant. Grace Beahm Alford/Staff 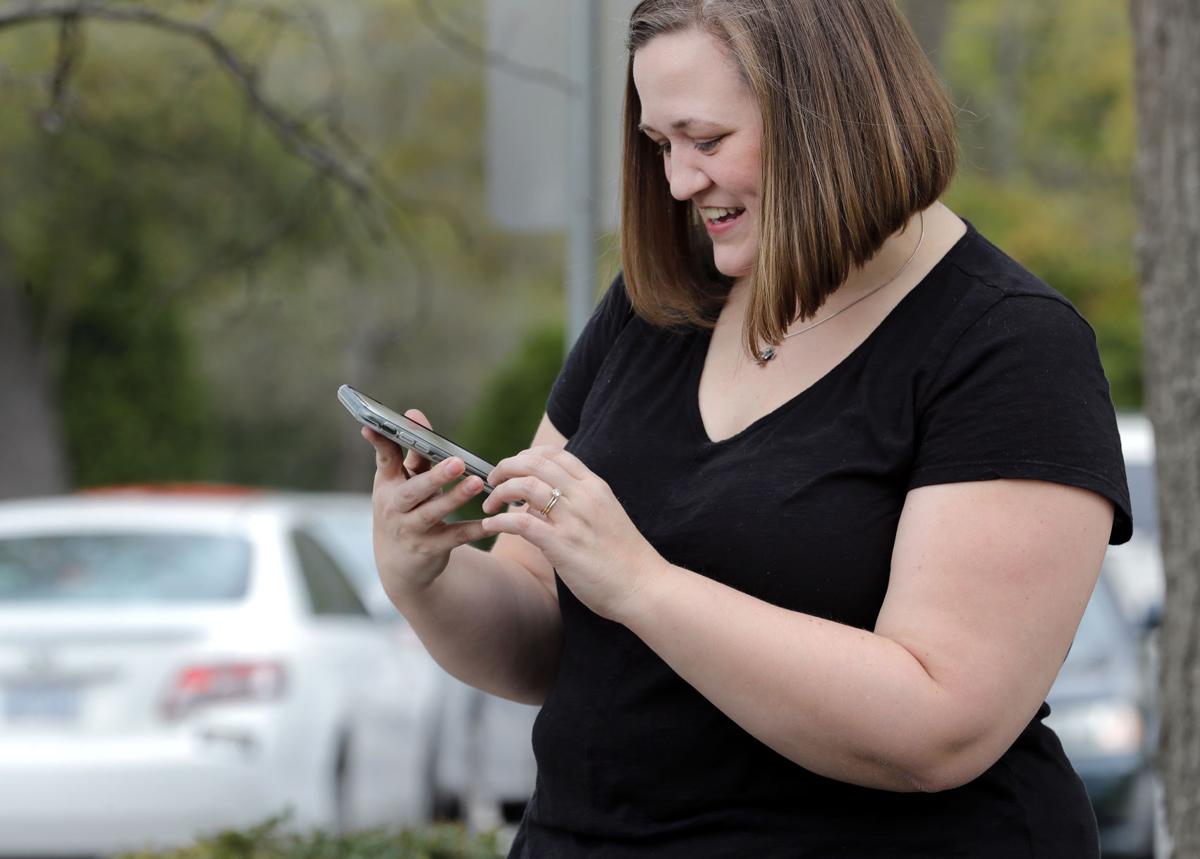 Sarah Hairell reads over the dozens of messages of people praying, by text, for Bishop Steve Wood, rector of St. Andrew’s Church who has tested positive for the coronavirus and has been admitted to the ICU at East Cooper Medical Center, Monday, March 23, 2020, in Mount Pleasant. Grace Beahm Alford/Staff

Carole Thomas raises her hands in prayer outside to East Cooper Medical Center to pray for Bishop Steve Wood, rector of St. Andrew’s Church who has tested positive for the coronavirus and has been admitted to the ICU Monday, March 23, 2020, in Mount Pleasant. Grace Beahm Alford/Staff

Sarah Hairell reads over the dozens of messages of people praying, by text, for Bishop Steve Wood, rector of St. Andrew’s Church who has tested positive for the coronavirus and has been admitted to the ICU at East Cooper Medical Center, Monday, March 23, 2020, in Mount Pleasant. Grace Beahm Alford/Staff

Someone brought coronavirus to a conference of about 150 Anglican clergy and lay delegates from across the Southeast gathered at All Saints Pawleys Island church earlier this month.

From that group, so far, three priests from St. Andrew's Church in Mount Pleasant have tested positive for the virus, including its 56-year-old rector who on Tuesday lingered on a ventilator for a fifth day. The second priest shows no symptoms. The third is self-quarantined at home with fever, cough, chills, headache and fatigue.

And then there's the spouse of a lay delegate, who tested positive but remains unidentified, condition unknown.

Those who've tested positive got sick around the same time, so they might have all been exposed by the same source, a patient zero. But who?

They might never know, given conference attendees spanned the Southeast. They worked and worshiped at the church, dined together at an offsite venue. Symptoms take days to show up after exposure. And testing and results are taking a week or longer to get in the Lowcountry.

What is clear: The 150 or so clergy and delegates at the conference all scattered back to their home churches.

St. Andrew's is a large and prominent church in Mount Pleasant, so the clergy returning there made contact with thousands more people after they arrived — and those interactions provide a road map for how one person with broad social reach can spread this new virus unknowingly to thousands upon thousands more people.

It's happening around the country.

One church, many contacts

On Sunday, as St. Andrew's switched to all online services, U.S. Sen. Rand Paul announced he'd tested positive for the coronavirus after he'd been voting on the Senate floor, interacting with colleagues and reporters, even going to the Senate gym and pool just hours before his results were announced.

The day after the Pawleys Island conference, on March 8, St. Andrew's held its usual six Sunday services at two sites, in its historical church building and at Mount Pleasant Academy, a public elementary school nearby. Church leaders encouraged hand-washing, social distancing, no handshakes or hugs.

But mostly, the virus still felt far away.

Two days later, Associate Rector Randy Forrester taught a class to almost 100 people at the church's theological school. Hours later, he felt tired, with hints of allergies. Given he has four young children, he played it safe and self-quarantined.

Forrester, a healthy 40-year-old, went online to MUSC's telemedicine portal. The advice back? He probably had a cold.

Then a fever set in. Fatigue sank bone deep. Chills and aches rattled him. He thought he had the flu. He had no idea he'd been exposed to the virus.

Meanwhile, Wood and Associate Rector Anthony Kowbeidu comforted the grieving during visitation for loved ones of longtime church member Robert Donaldson. That was at a local funeral home, more exposure.

Three days later, on March 15, the church held its six worship services, with new tweaks to minimize contact during communion. Kowbeidu, who had no symptoms, presided over services in its historic chapel while Wood and Forrester remained self-quarantined.

Kowbeidu passed out briefly during the service, then also self-quarantined.

Still, no positive tests, no concrete evidence of coronavirus infection in their midst.

The spouse of a lay delegate to the conference back in Pawleys Island tested positive. A few days later, Kowbeidu tested positive. Yet, he still had no other symptoms — even as Wood was admitted to East Cooper Medical Center.

Soon, Wood landed in the ICU, on a ventilator, his test results positive. Forrester, who had been ill for 10 days, finally was able to get a test. On Tuesday, two weeks after he felt the first symptoms, he got the test result: positive.

Despite all that, church officials said they haven't heard from state Department of Health and Environmental Control officials for guidance or monitoring.

"As a staff, we haven't heard from DHEC about anything at all," Greg Shore, the church's communications director, said on Monday. "I think we're all going to wind up in contact with multiple people who have tested positive."

(On Tuesday, Shore learned that DHEC had contacted Kowbeidu but wasn't aware of anyone else. A DHEC spokeswoman told The Post and Courier it had opened a contact investigation that would involve reaching out to the ministers' close contacts as well as people at high risk of complications who had contact with them.)

Meanwhile, church leaders don't know how many members have self-quarantined or come down with symptoms. Word spread on Monday that members of the church's worship team have had symptoms, and at least one was awaiting a test result. Forrester, who finally is feeling somewhat better, said one of his children has mild symptoms.

Luckily, MUSC's telemedicine director is a St. Andrew's member who could offer expertise. Church leaders also have leaned heavily on CDC guidelines to warn members: If you've interacted with the sick clergy, self-quarantine for 14 days. If you've come down with coronavirus symptoms, call your doctor. A page on the church's website offers details, links and an update of which clergy have tested positive.

"We got word out as widely as we could," the Rt. Rev. David Bryan, the diocese's suffragan bishop, said.

Meanwhile, Kowbeidu was released from isolation on Monday. Wood remained on a ventilator, his chest X-ray slightly worse on Tuesday. Members gathered outside East Cooper Medical Center to pray for him. The parking lot was empty of visitors no longer allowed to see the sick inside.

The small group sang and prayed — all from more than 6 feet apart, or from their cars.