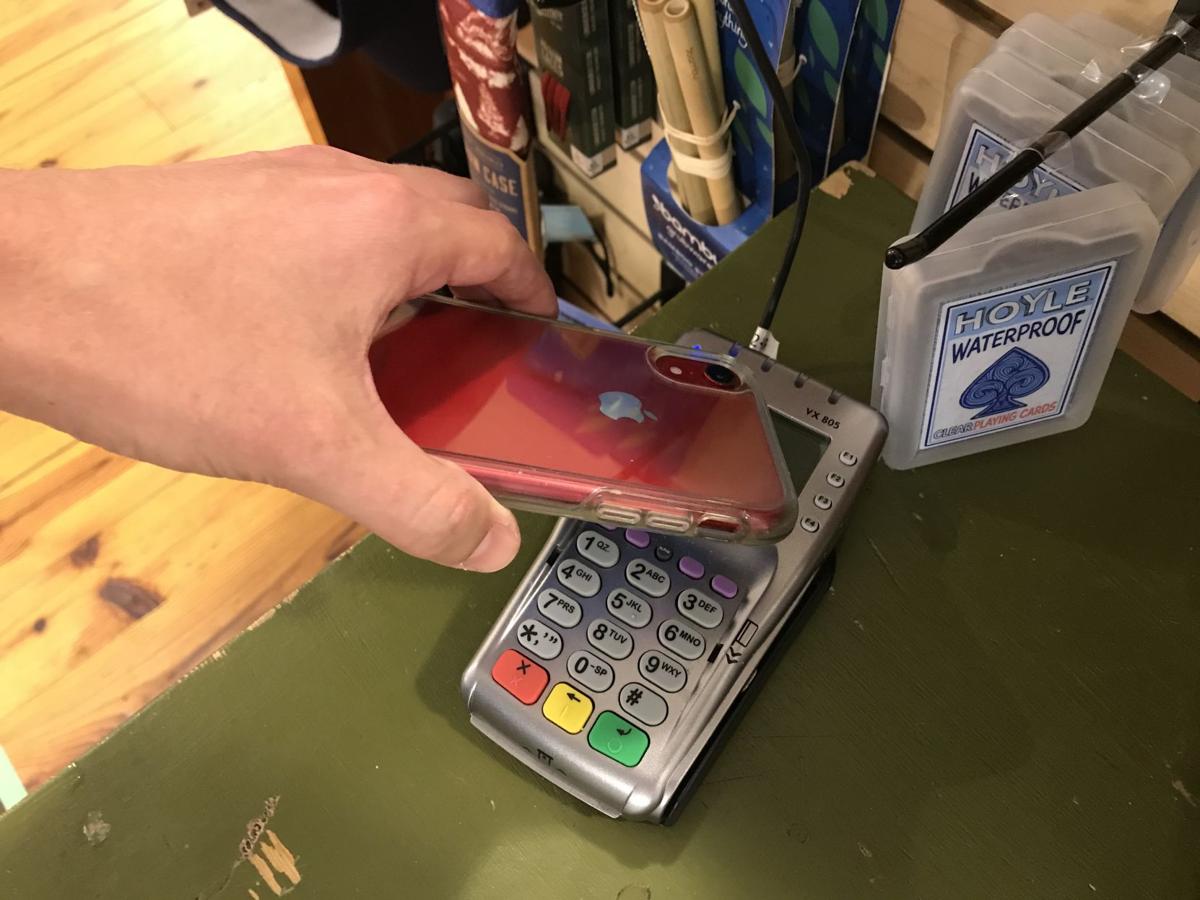 Smartphones such as Apple's iPhone can be used for contactless payment by placing them near a contactless-enabled device at retailers. The use is expected to triple globally by 2024 and rise nearly 750 percent in the U.S. by then. Warren L. Wise/Staff 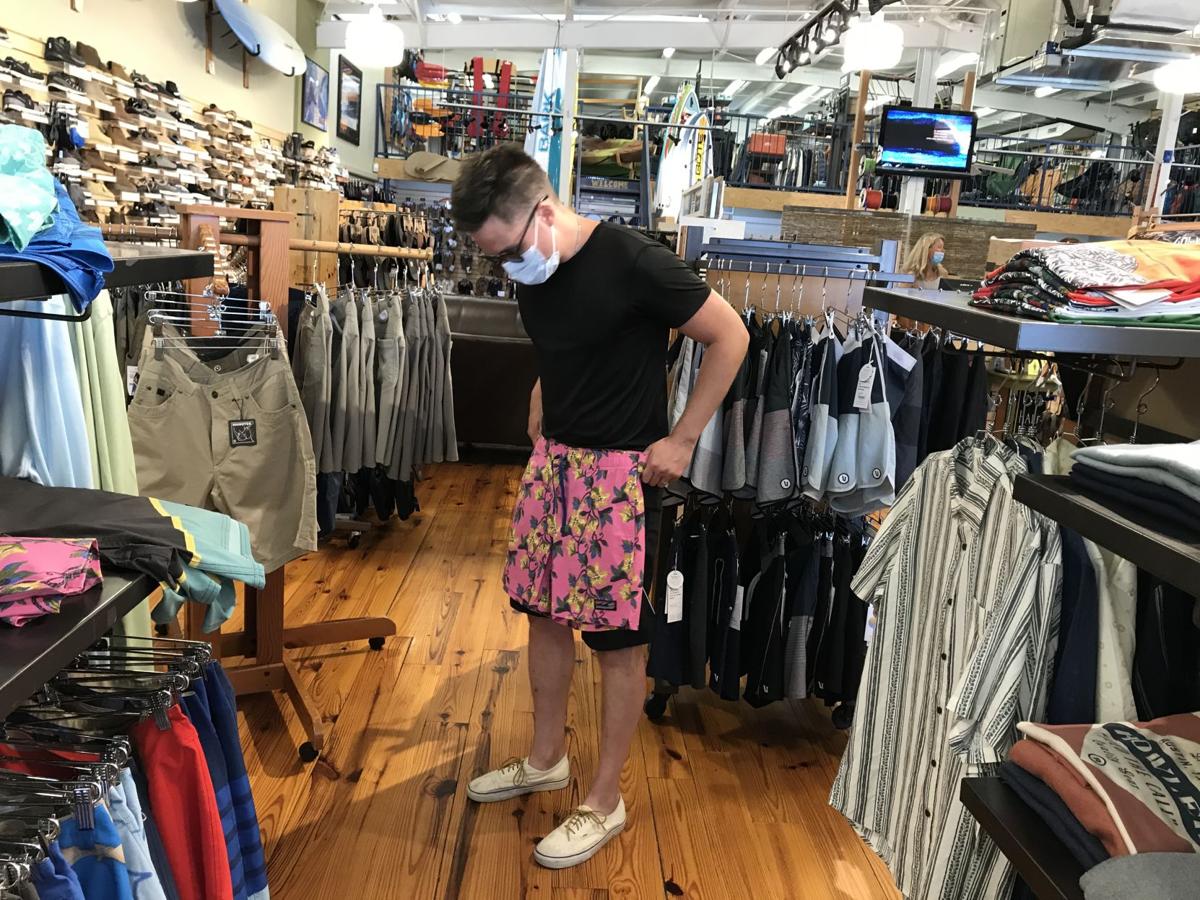 Jeremy McLellan of Mount Pleasant is an avid user of contactless payment. Here, wearing a mask in the era of the coronavirus, he looks at a pair of swimming trunks in Half-Moon Outfitters before purchasing them. Warren L. Wise/Staff 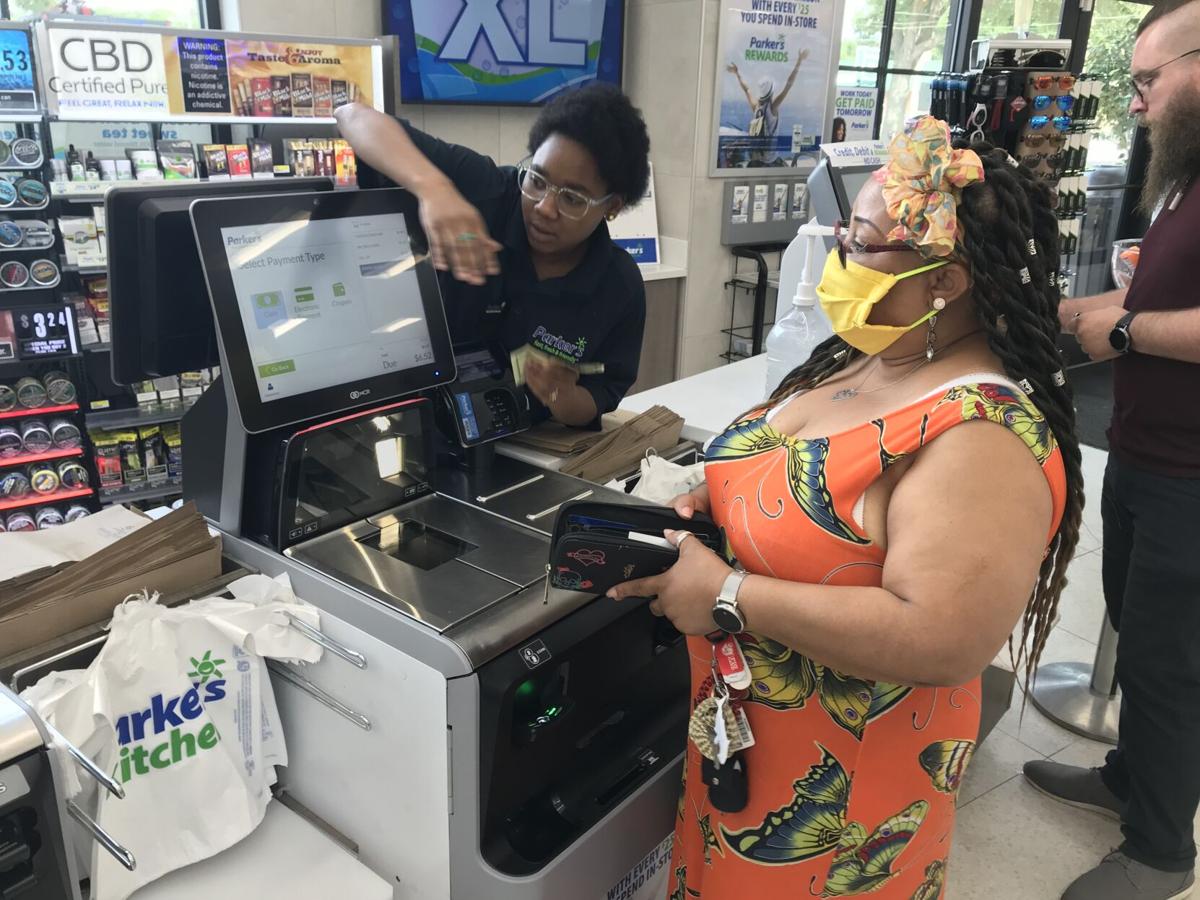 Parker's Kitchen clerk Aryonne Johnson helps customer Jackie Bennett at one of three self-checkout terminals at the new convenience store and gas station in West Ashley while customer Kristopher McClamb checks out at another terminal. Johnson estimates at least 80 percent of the purchases are through the self-checkout stations, where a touch-free option is offered. Warren L. Wise/Staff

For Jeremy McLellan, contactless payment has been an option for several years.

Since the coronavirus outbreak, it's virtually a way of life.

"It's just peace of mind," the Mount Pleasant resident said. "It's a lot easier because you don't have to wipe everything off if the cashier touches your card and gives it back to you after touching hundreds of other cards."

The market for contactless payment, a popular offering available on apps such as Apple Pay, is projected to triple to $6 trillion worldwide by 2024 as smartphone-enabled wallet transactions skyrocket and banks expand the use of contactless cards, according to a recent report from British market analysis firm Juniper Research.

The pandemic is expected to further hasten a transition to the up-and-coming way of buying goods and services.

"Coronavirus will accelerate the use of contactless payments as the World Health Organization, many banks and governments are recommending it over cash," said Juniper research analyst Susannah Hampton.

She added the contactless payment limit is being raised in several countries and some countries are refusing cash altogether.

"We do envisage that there will be a lot less discretionary spending using contactless," Hampton said.

Those kinds of purchases of mostly non-essential goods are typically made in places such as coffee shops, cafes and pubs.

"That sort of spending isn’t happening at the moment," she said. "Consequently, we will likely see a drop in overall transaction volumes, as contactless won’t be used for purchases outside the essential. We will, however, see an increase in average spending, with the contactless limits being raised, accompanied by a longer-term boost in adoption (of the payment method)."

In the U.S. alone, Juniper predicts that the use of contactless payment will zoom from $178 billion this year to $1.5 trillion over the next four years, a nearly 750 percent increase.

Additionally, contactless-enabled point of sale devices at retailers and other venues will exceed 161 million by 2024, growing from 78 million last year and largely driven by changing habits among U.S. consumers.

Since the pandemic began, the use of contactless payments has grown by an estimated 20 percent, according to Richard Crone, CEO of Crone Consulting, in a report by the National Retail Federation.

Further usage growth will be fueled by promotion of contactless cards by major U.S. banks and reductions in costs of issuing the cards. Some large public transportation systems that draw huge riderships, including New York's Metropolitan Transit Authority, also are adopting the payment method.

New restaurant ready to launch in Mount Pleasant; another in works for Charleston

In Charleston, the CARTA bus system hasn't implemented contactless payment, but plans are in the works.

"It should be in place by the end of the year," spokesman Marquel Coaxum said.

Several major banks in the U.S., including American Express, Bank of America, Capital One, Chase, Citi and Wells Fargo, rolled out contactless cards over the past couple of years, some with pilot programs in select cities.

The issuance most likely will amplify contactless usage among customers not using smartphone-enabled mobile wallets.

For U.S. retailers that haven't installed the new payment infrastructure, Juniper recommended they coordinate with technology providers to make it a priority to capitalize on the growing trend.

Hampton said most terminals in the U.S. recently converted from magnetic strip to embedded chip readers and much of the infrastructure is now in place to accept contactless payments.

Hampton told Mobile Payments Today that many of the newer "EMV-enabled" point-of-sale terminals with embedded chips "are compatible with contactless card payments and just require software installation or updates."

"The additional transaction time introduced with the transition to EMV is reduced through the use of contactless cards, leading to an improved experience of cardholders," she said.

Besides the safe-health attraction of contactless payment in the era of a pandemic, the process provides a more immediate benefit for the consumer and the retailer.

It speeds up transactions by eliminating the need for a customer to enter a personal identification number. For banks and credit card issuers, consumers who use contactless payment, often called tapping, tend to use their cards more frequently.

Contactless payment was slow to take off in the U.S. after being introduced in the 1990s.

In 2016, the U.S. accounted for less than 3.5 percent of the contactless cards in force, according to a 2018 report from consultancy firm A.T. Kearney.  By contrast, South Korea reported the highest rate of contactless cards being used at 96 percent.

Some retailers in the U.S. have already ratcheted up the option in response to the coronavirus.

At the height of the lockdown in early April, Florida-based Publix was among the first major grocery chains to announce it was rolling out contactless pay at all of its 1,242 supermarkets, including 64 in South Carolina.

A spokeswoman declined to say what percentage of sales come from contactless payment since the option was introduced.

A contactless payment is made by placing a smartphone or similar pay-enabled credit or debit card near a contactless-enabled device, rather than swiping or inserting a card into the PIN pad. The most commonly known forms of contactless payments are Apple Pay, Google Pay and Samsung Pay.

Apple Pay alone is expected to make up about 52 percent of smartphone-enabled transactions by 2024, up from 43 percent this year, Mobile Payments Today reported.

To see if a merchant offers contactless payment, look for the symbol — similar to a wifi logo but turned on its side — at the terminal. Place the smartphone or card within one to two inches of the symbol on the terminal. When payment is accepted, it signals the customer with a beep, green light or check mark.

'Wave of the future'

At Half-Moon Outfitters in Mount Pleasant, employee Daniel Ware said about one of every 20 or so purchases is made through contactless pay.

"It's about the same as it was before the virus," said Ware, who has worked at the store for about six years.

Another shopper at the location, who would only identify himself as Mike S. of North Charleston because he is skittish of divulging personal information, said he doesn't trust contactless payment because he finds it intrusive and doesn't want to get hacked.

The contactless payment system is not only used for purchases in-store or online but also to transfer money.

Users can send funds to friends and family through their text message system, email address or a phone number.

Some convenience stores, too, offer contactless payment. At the new Parker's Kitchen in West Ashley, store clerk Aryonne Johnson estimates roughly 80 percent of all purchases are made at self-checkout terminals, much like those at grocery stores. The terminals are equipped with touch-free payment options.

While customers may not use a smart card for payment on all purchases, Johnson said self-checkout reduces the touching of cash, cards and purchased products.

"It's a good system, and everyone seems to like it," she said.

Jackie Bennett liked the speed of checkout and called it "the wave of the future," but she did offer one bit of advice.

"The terminals are a bit too close together," the face mask-wearing West Ashley resident said.

Still, Bennett called it a good system that's quick and easy to use.

Company owner Greg Parker said about 28 percent of all purchases are made with the convenience store's loyalty PumpPal card, and the Savannah-based chain is looking to add the contactless option on all cards over the next few months.

"It will make the purchases even faster because you won't have to put in the PIN number," Parker said.