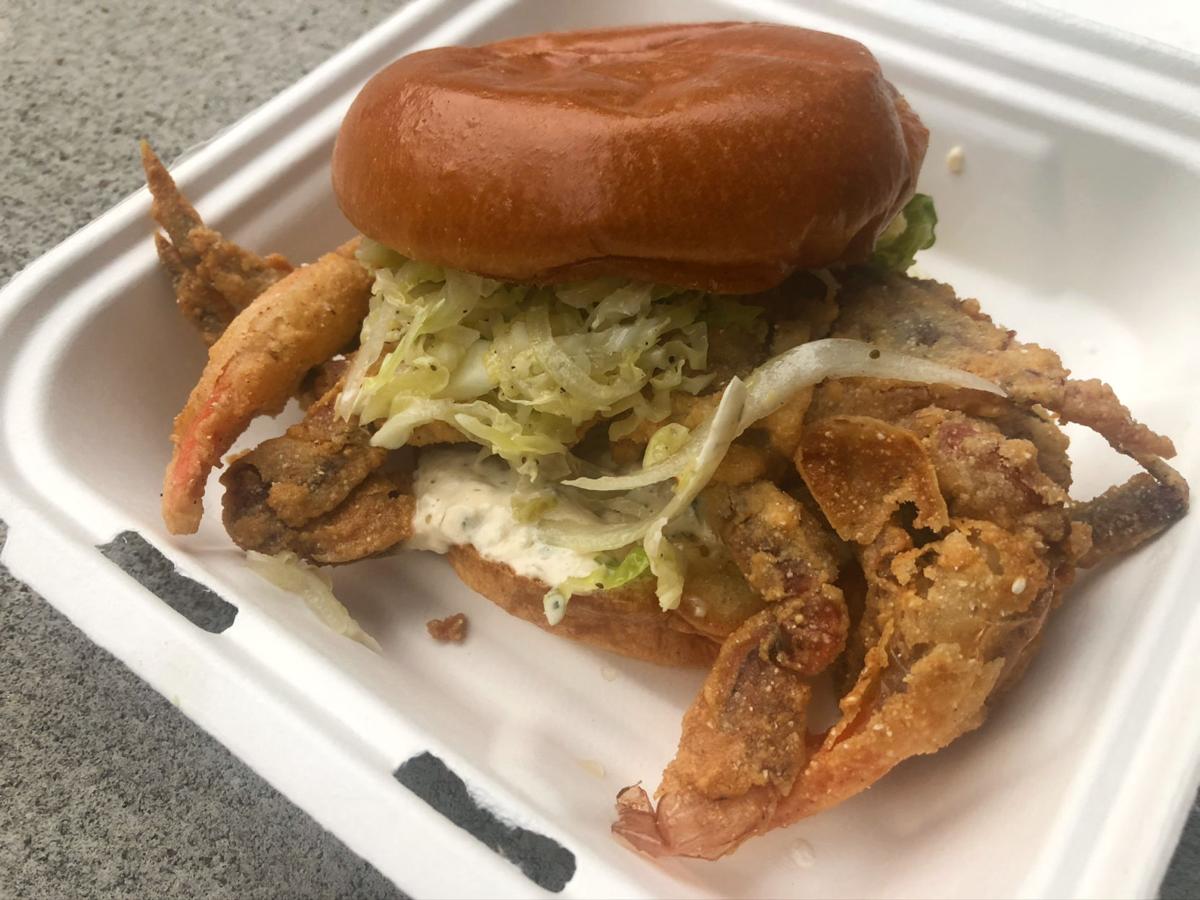 Johnson has a deserved reputation for serving some of the best soft-shells in town, and this one didn’t disappoint. Hanna Raskin/Staff 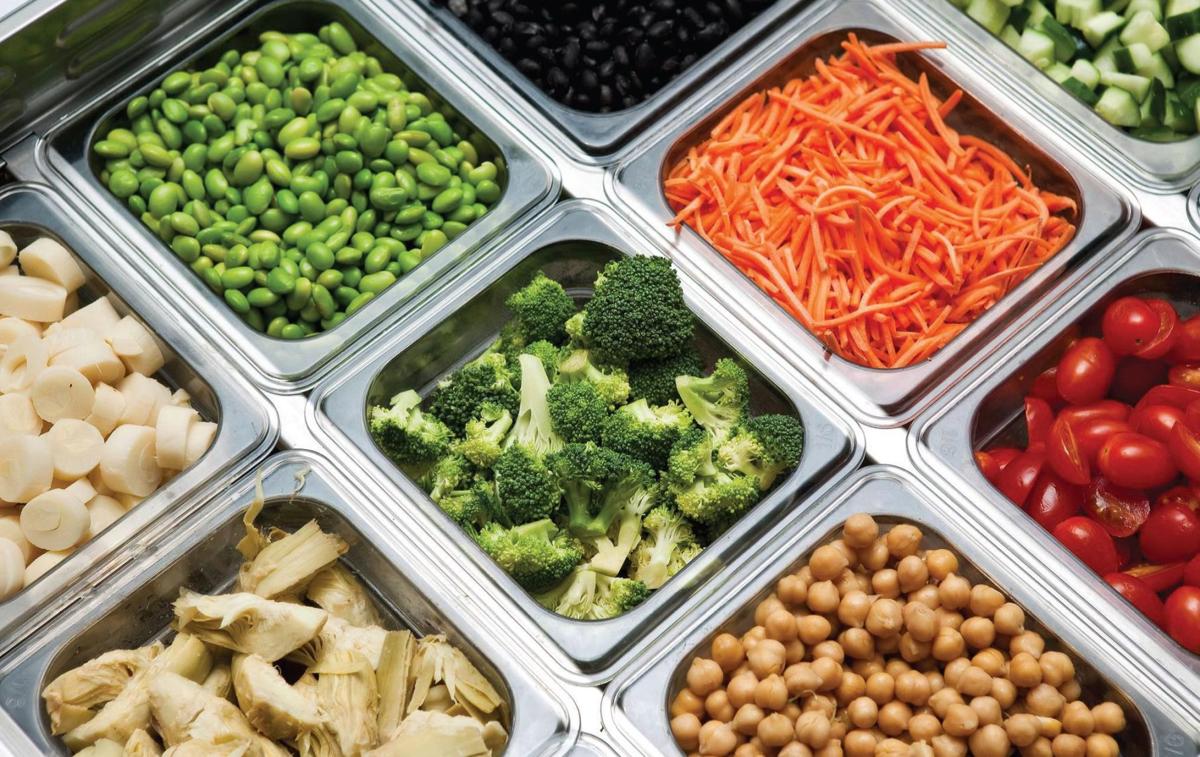 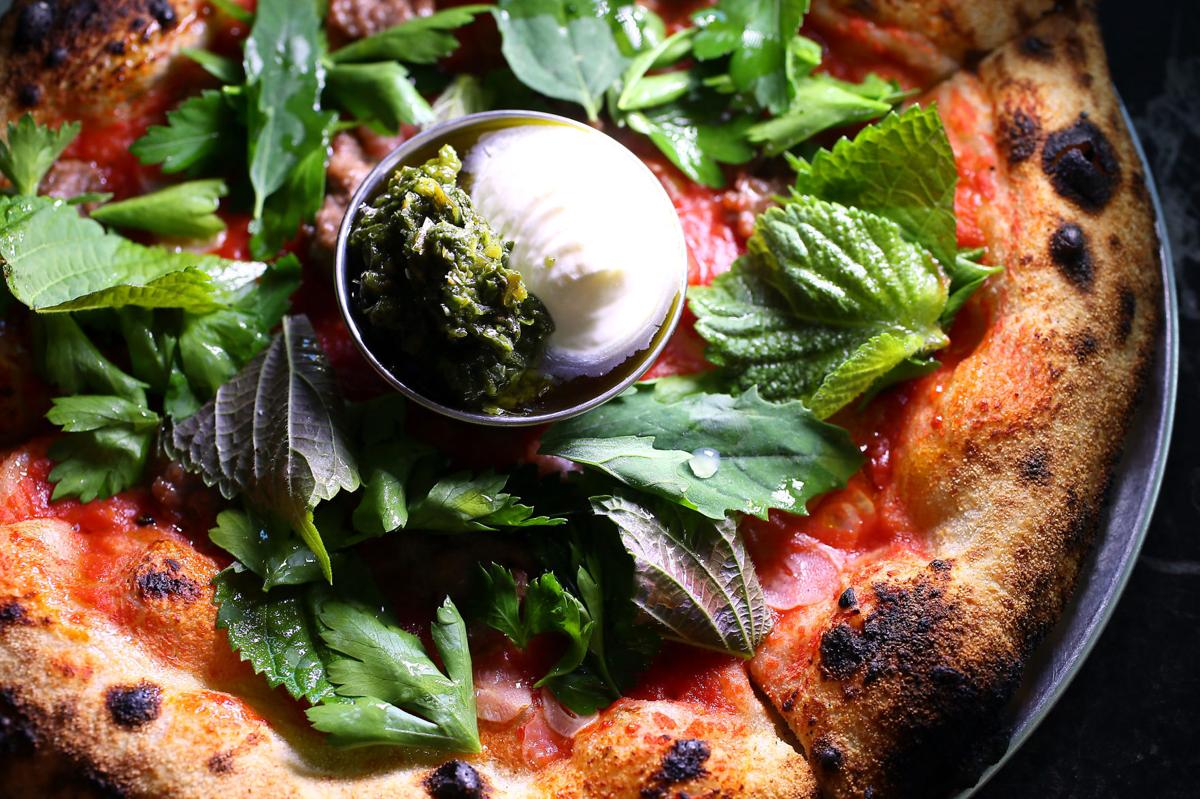 Shabazi pizza with tomato, lamb, parsley, zhug and yogurt at Renzo restaurant on Huger Street on Thursday, May 10, 2018. File/Wade Spees/Staff 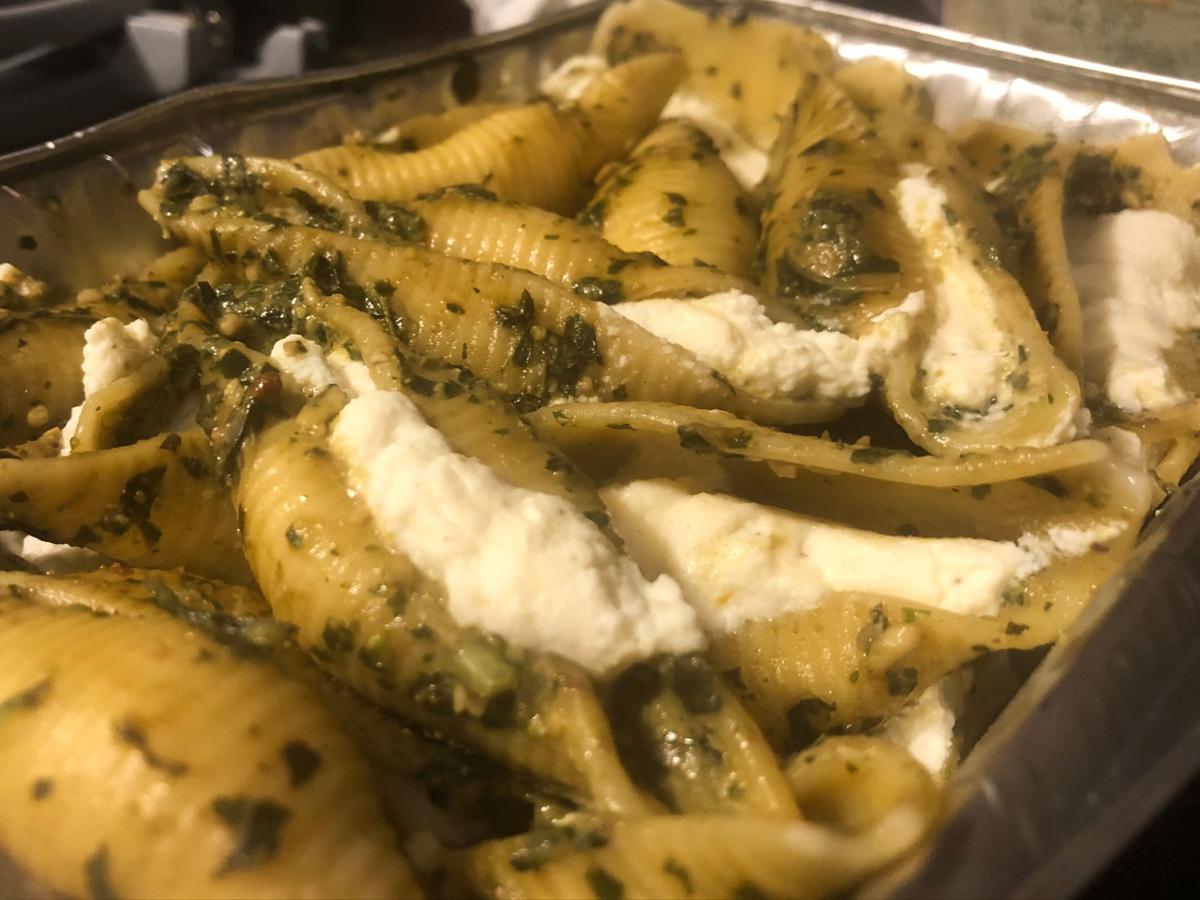 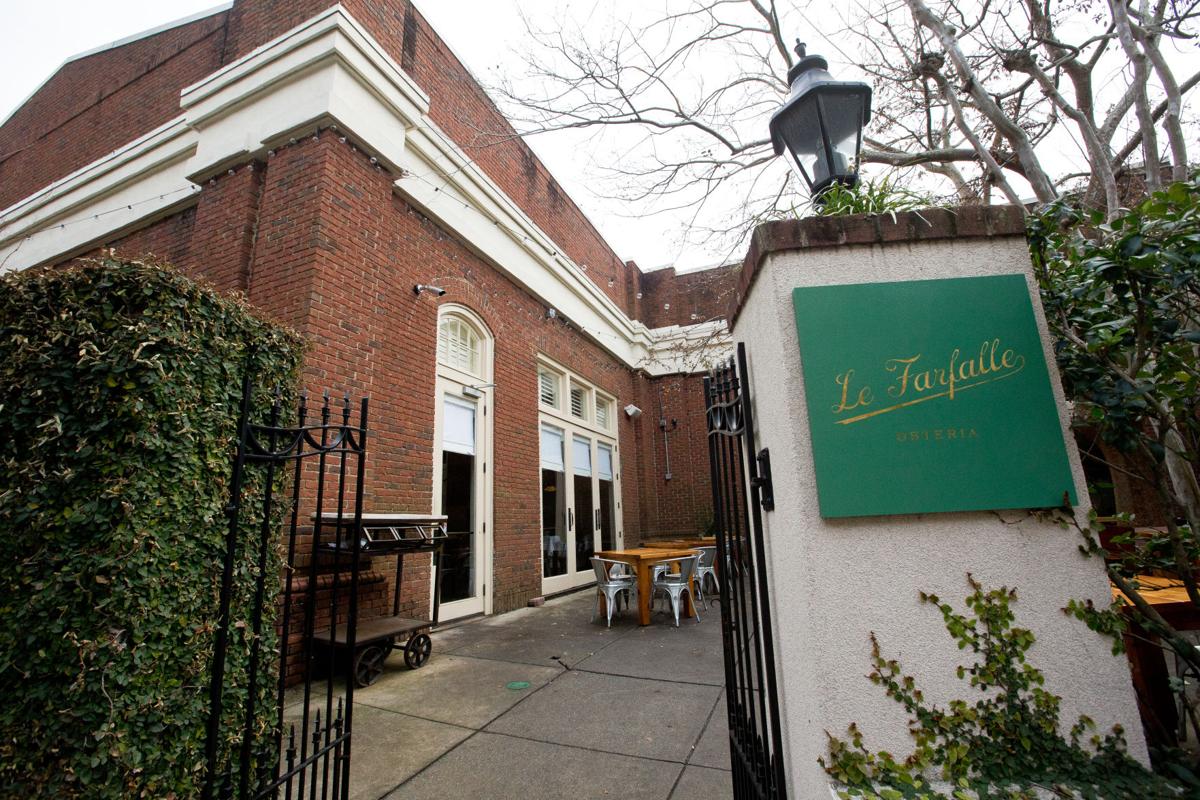 So much is slower in the company of the coronavirus threat. The pandemic has doubled how long most people spend washing their hands and likely dragged out the school year. Even something as seemingly simple as cleaning up after lunch can take forever.

At least that was my experience after ordering from Lewis Barbecue. There was way more green chile barbecue sauce in the takeout bag than I needed for my sliced brisket sandwich. Even after I poured it over my pinto beans, there was still enough left to save for another sauce occasion.

It was then that I paused for an excruciatingly long time, trying to decide what to do with that sauce, because I had no idea what I’d be eating that night or the next day or the day following that.

(Fortunately, I didn’t have to get bogged down by maudlin thoughts of never tasting the exceptional sauce again, since Lewis has prudently bottled its sauce for retail sale, and since general manager Ben Garbee assured me he wore out his shins on Saturday ferrying smoked meat orders to the curb. But in the name of not taking anything for granted: shop.lewisbarbecue.com.)

For a food critic, it’s disorienting not to have at least a week’s worth of meals plotted out. I keep running lists of restaurants under review, restaurants being considered for review, restaurants trying out new menus and restaurants headed by new chefs. About the only thing which typically disrupts my ceaseless dining-out schedule is Monday, the industry-wide day of rest.

Now, though, everything keeps changing — and not at the slow pace you’re supposed to adopt at the handwashing sink.

To be clear, this is not a complaint on my account. It would take an unrepentant monster to lament the loss of a predictable routine when we’re dealing with a crisis that has already robbed 8 million food-and-beverage workers of their jobs, ripped through restaurateurs’ savings and pulverized dreams wrapped up with events, awards and book releases, among other food world add-ons which seemed incidental until they were gone. But it is a decent marker of uncertainty.

Delivery services are switched, hours are adjusted and menus are tweaked, rewritten and rescinded as restaurants shift into quasi-grocery mode. More than one restaurant owner has told me the pandemic has forced them into a totally different business. Who would have thought last month that they’d be dialing up high-end tapas bar Estadio for a pair of Italian subs delivered by golf cart?

Nobody knows what’s coming next. Nobody knows when this will end. Sure, this is a very dramatic way of explaining why I haven’t written about my takeout lunch from Lewis, or my meals from anywhere else, but

(Note: I live downtown and don’t have a car, so am pretty much limited by the principles of social distancing to restaurants which deliver or lie within walking distance of my house. There are no doubt equally great pickup specials in your neighborhood.)

(Note 2: Don’t hesitate to order a dish which isn’t on this list, or one you wouldn’t necessarily associated with the restaurant serving it. Restaurants are smartly making use of what’s in their coolers, which is why many are deviating from their standard cuisines. Roll with it, and of course, tip generously.)

Create Your Own Salad, Verde

Since all I need to do my job is a phone and a computer, it didn’t take much to magically turn my home into a newsroom. But this office isn’t furnished with a cafeteria, which is why I’ve ordered a salad from Verde almost every day for lunch.

Full disclosure: There was one day when the restaurant ran out of kale, so gave me additional spinach, which I’d also requested. And that’s been the only tiny skip in a system that otherwise hasn’t missed a beat since people started taking pandemic precautions.

It may not matter to you that Verde is a woman-owned company which prioritizes buying local ingredients, but it should matter that its vegetables are always fresh, and its dressings are on point.

Also, at a time when choice is severely limited, it’s great fun to decide if you’re more in the mood for flavors of the Mediterranean (chickpeas, almonds and quinoa tabouli, perhaps?) or Mexican (I like black beans and pickled jalapenos.) Plus, it’s a healthy counterbalance to the stress snacking and rage baking that are apparently America’s new favorite pastimes.

This appetizer has since vanished from the North Central pizzeria’s takeout dinner menu, but its spirit lingers in the form of Detroit pizza slices, now available for lunch and, sometimes, dinner. The cheesy bread, served with a rollicking tomato sauce for dipping, was basically just a naked version of the Motor City’s signature deep-dish pie.

As the story goes, Detroit pizza was pioneered by bakers using industrial pans that held spare parts in factories. So its origin tale is resolutely blue-collar, but its defining characteristics are the opposite of what you’d expect from a pizza with assembly line roots. Renzo’s rendition is rightly and beautifully light and lacy.

Spring started last Thursday, but it’s quite possible nobody around here noticed, save for the crew at Babas.

Perhaps because the café draws inspiration from European models, which take the role of community fixture seriously, Babas on Cannon has responded to the current crisis with brio. While other restaurants have futzed with communications and wrangled with uncooperative delivery services, Babas has relied on an elegant app, so it’s almost effortless to get pear jam toast in the morning and pickled shrimp salad in the afternoon. The digital shop also offers high-quality pantry items, such as eggs, bacon and milk.

But the very best of the lot is a daily pasta dinner for two. On the first day of spring, which I’d overlooked too, the $45 set I received consisted of wobbly shells crammed with ricotta and stained with bright green pesto; plucky butterbeans glazed with olive oil and decked out with fresh herbs; lettuce with a lively sherry vinaigrette and a Tiller Baking Co. baguette, buttered, garlicked and oven-ready. There was no question of the season.

Babas isn’t the only downtown Charleston restaurant to discover that pasta is a problem solver. At Brooks Reitz and Tim Mink’s restaurants, which have temporarily congregated under the Monza roof to serve a collection of menu highlights from across the company, one of the available pickup items is a $40 package featuring 1 pound of pasta and 1 quart of Melfi’s Bolognese sauce.

The Le Farfalle deal is similar, although it’s listed on UberEats, so you don’t need to leave the house to take advantage of it: $30 buys two separate containers of noodles and marinara sauce, both served cold. Although it’s listed as sized for four, it feeds two people with normal appetites and the basic range of Italian pantry accouterments. You need to provide to Parmesan for the pasta and salt the sauce.

But the sauce is robust and the rigatoni is sturdy, and has far more flavor than you’ll find on the supermarket shelf (which in many cases has been mostly cleared of boxed noodles.)

There are two Charleston celebrations around which I will schedule my travel plans in order not to miss: Watch Night services on New Year’s Eve and the start of soft-shell crab season.

Unlike Watch Night, soft-shell crabs aren’t fixed to a recurring date. Their yearly arrival is determined by the moon, tides and Easter. Even now that soft-shells are just short of being an official Charleston restaurant holiday, there’s still an air of mystery that surrounds the situation, or should. It’s always preferable to be alerted to the first soft shell sighting by text, rather than a corporate press release.

My message came via e-mail, from food section contributor Marion Sullivan. “Did you see that Kevin Johnson is offering softies?”

At The Grocery, Johnson isn’t just serving sandwiches: His pickup operation, all managed from a table barricading the entryway to the Cannon Street restaurant, includes elaborate dishes such as a $50 steak, wine and dessert. But all I wanted was the crab, dusted with cornmeal and fried to order.

Johnson has a deserved reputation for serving some of the best soft-shells in town, and this one didn’t disappoint, even it wasn’t splayed across a Le Creuset platter or garnished with butterbean chow chow. The spectacular sandwich was finished with slaw and spicy mayonnaise, but the clear star was the crab, captured between two distinct moments in time. Perhaps you can relate.