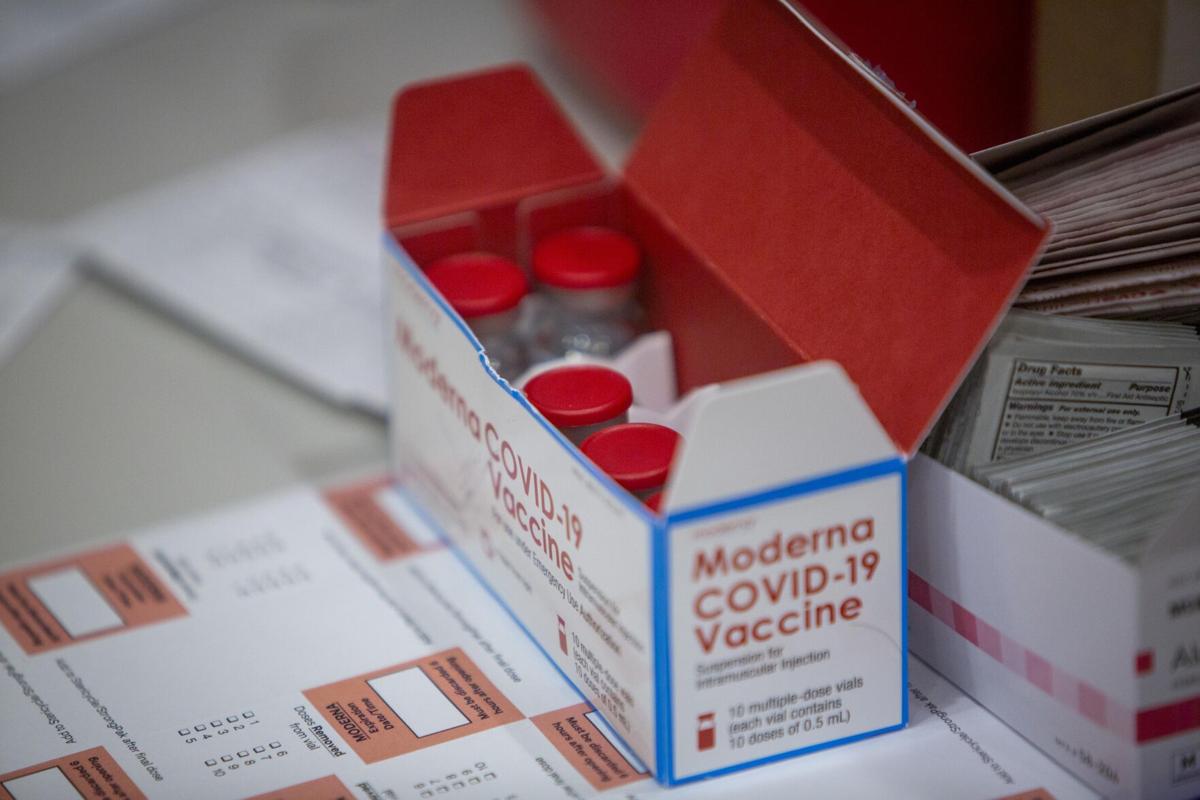 Bishop Gadsden received 190 doses of the Moderna COVID-19 vaccine for its staff and residents on Dec. 29, 2020. Seniors 70 and older who want a COVID-19 vaccine were told Wednesday to expect frustration and disappointment. Seniors in long-term care facilities have already received a vaccine. File/Gavin McIntyre/ Staff 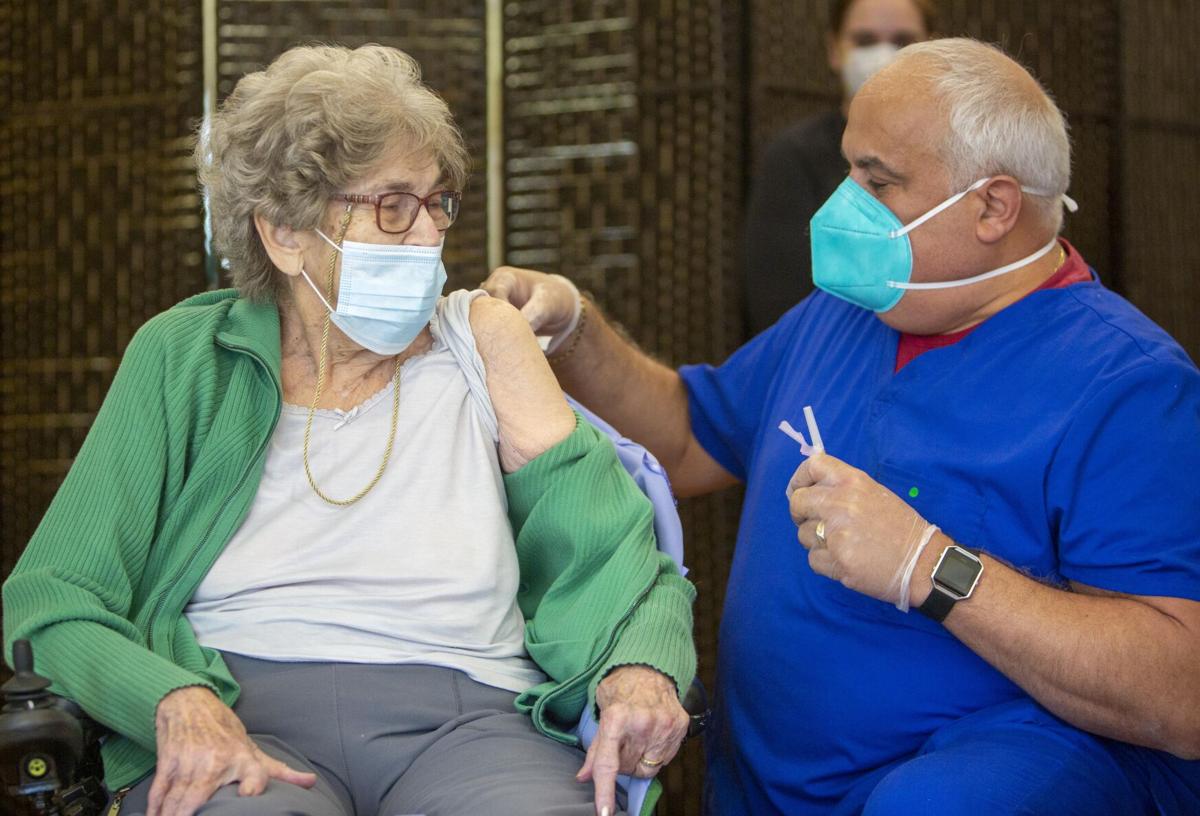 Bishop Gadsden resident Joan Ladd, 94, receives the Moderna COVID-19 vaccine Tuesday, Dec. 29, 2020, from Patrick DiSarno, a pharmacist with CVS, at Bishop Gadsden on James Island. The retirement community received 190 doses of the vaccine for its staff and residents. File/Gavin McIntyre/Staff

On the first day COVID-19 vaccines were officially allowed to be given to people 70 and older in South Carolina, few, if any, received a dose.

Seniors who want a COVID-19 vaccine were told Wednesday to expect frustration and disappointment. Leaders at the S.C. Department of Health and Environmental Control said in advance they knew an online system showing available appointments was not perfect, and they are working to create a better one.

But even those who were able to find and schedule an appointment to receive one of the two authorized coronavirus vaccines across the state might have to wait weeks to actually get the shot.

To schedule an appointment

Appointments for people age 70 and older are scarce at the moment. Anyone in the age group should go to scdhec.gov/vaxlocator to see where appointments are open. You will need to schedule the appointment through the health care provider.

The S.C. Department of Health and Environmental Control is answering vaccine questions at 1-855-472-3432. Appointments are not available through that line.

A spokeswoman for DHEC said she was "unable to confirm that any locations are giving vaccines today to those over 70." Dr. Linda Bell, DHEC's chief epidemiologist, said during a meeting with the state's Vaccine Advisory Committee on Wednesday the agency's phone line crashed in the morning as it strained under high volume. She encouraged the public to keep checking the website, where providers with new appointments will continue to pop up.

DHEC to newly eligible seniors: Don't expect to get a COVID vaccine soon in SC

"We recognize that the demand is very high and the supply is not yet sufficient to meet that," she said. "It will take several weeks for this rollout."

Just the other day, 81-year-old Deloris Crozat lost her sister to COVID-19, making her all the more eager to sign up for a shot.

Crozat, a Ridgeville resident, takes a blood thinner and said she has had a heart arrhythmia for many years. After a struggle with the phone line, Crozat found an appointment to get a vaccine — but not until March 13.

"I'm not a person who sits still," she said. "I love life." And she wanted to get back to hers as soon as possible.

The state's largest health care system says it is several weeks away from being able to offer vaccines to seniors. Prisma Health CEO Mark O'Halla said, based on supply, all available appointments are currently booked up as the Midlands and Upstate hospital system continues to vaccinate health care workers.

"Be understanding that we're going to need to be patient," he said. "It may take us a little bit of time to get to you, but we will get to you."

Prisma has been receiving 7,800 doses of the vaccine made by Pfizer each week.

South Carolina had the third-lowest rate of vaccine administration per capita of all states as of Wednesday afternoon, according to data updated daily by the Centers for Disease Control and Prevention.

The state's weekly allotment of vaccine from the federal government is about 64,000. Approximately 600,000 people in South Carolina are age 70 or older, though a portion live in long-term care facilities and will already have received a vaccine.

Teresa Arnold, state director of the AARP's South Carolina chapter, commended DHEC's staff for their efforts through a difficult process.

"I'm going to have to urge patience," she said. She continued to stress the importance of wearing a mask and social distancing.

Dr. Brannon Traxler, public health director at DHEC, described the amount of vaccine flowing into South Carolina as a "trickle." She said the agency's hotline number crashed Wednesday morning because it received roughly 5,000 calls — it normally gets about 8,000 each week.

Most in SC won't be able to get COVID-19 vaccine until late spring, at the earliest

In response, Traxler said the agency contracted Wednesday morning with a company to double the number of call center operators from 30 to 61. Still, she said, callers should expect “extended wait times.” She had no estimate for how the new contract could decrease wait times.

DHEC continued to push people to use the website. Some encountered issues there, too.

By 9 a.m., no appointments were available in the Greenville and Spartanburg areas. Later in the morning, some changed back to green. One practice in the Midlands showed a green dot on the state map, but no contact information was provided.

In Camden, one hospital received more than 1,000 requests for vaccine appointments and had to pause accepting new ones. KershawHealth said it would reopen registrations once more vaccine doses arrived.

One of the only large organizations in the state with appointments available to schedule Wednesday was the Medical University of South Carolina, which has sites in the Charleston area as well as Chester, Marion, Lancaster and Florence.

Many people signing up with MUSC found appointments were only available for the early spring.

“This is absurd,” said William Martin of Isle of Palms.

When the 73-year-old initially made it through MUSC’s multi-step process, the soonest available appointment showing at the clinic nearest him was April 22. He kept trying, and seven attempts later, he lined up an earlier one on March 24.

Anyone not already in MUSC’s online MyChart system, like Martin, must first register for that.

“I can do it, but there’s a lot of people over 70 who won’t go through this process,” he said, adding he’s worried “a lot of people in this area will give up.”

Martin, who regularly volunteers during natural disasters, said he worked in Liberia in 2014 and 2015 during the Ebola epidemic and there, “you expect things to not be efficient." He had higher expectations for the United States.

Heather Woolwine, a spokeswoman for MUSC said the volume of people requesting an appointment was "extremely high" on Wednesday. Woolwine said some technical issues with the website were resolved early in the day. She said people should wait for the scheduling page to fully load in order to see all the options. And more opportunities should open soon.

"We are adding clinics as quickly as we can staff them," she said. Vaccinations are also going to be given at its drive-thru testing sites. "South Carolinians can rest assured that our teams are working around the clock to get the vaccine distributed and will continue to do so."

Now 70, Linda Maloney of Travelers Rest worked in communications during her career. Maloney expressed frustration that state health authorities didn't give more helpful information about what people should expect on Wednesday when registrations first became available.

"Communicate how it's going to be done when people sit down to make an appointment," she said.

Almost like she was buying a concert ticket, Maloney was up at midnight to try to grab a spot. After wrestling with MUSC's web system, she was able to make an appointment for Feb. 23 at MUSC's Chester hospital, nearly a two-hour drive from her home. Maloney's 62-year-old husband, who has a rare form of blood cancer, doesn't qualify, for now.

"I wish I could have given him my spot," she said.

Tom Conry, 74, was able to get a closer appointment: for Feb. 4 and 24 for his first and second doses. The Summerville resident said he and his wife, who isn’t eligible yet because she’s not yet 70, have been living “very cautiously.”

“I had such a sense of relief,” he said.

By 2020's end, SC has the doses of vaccine it hoped for. Less than a third have been given.