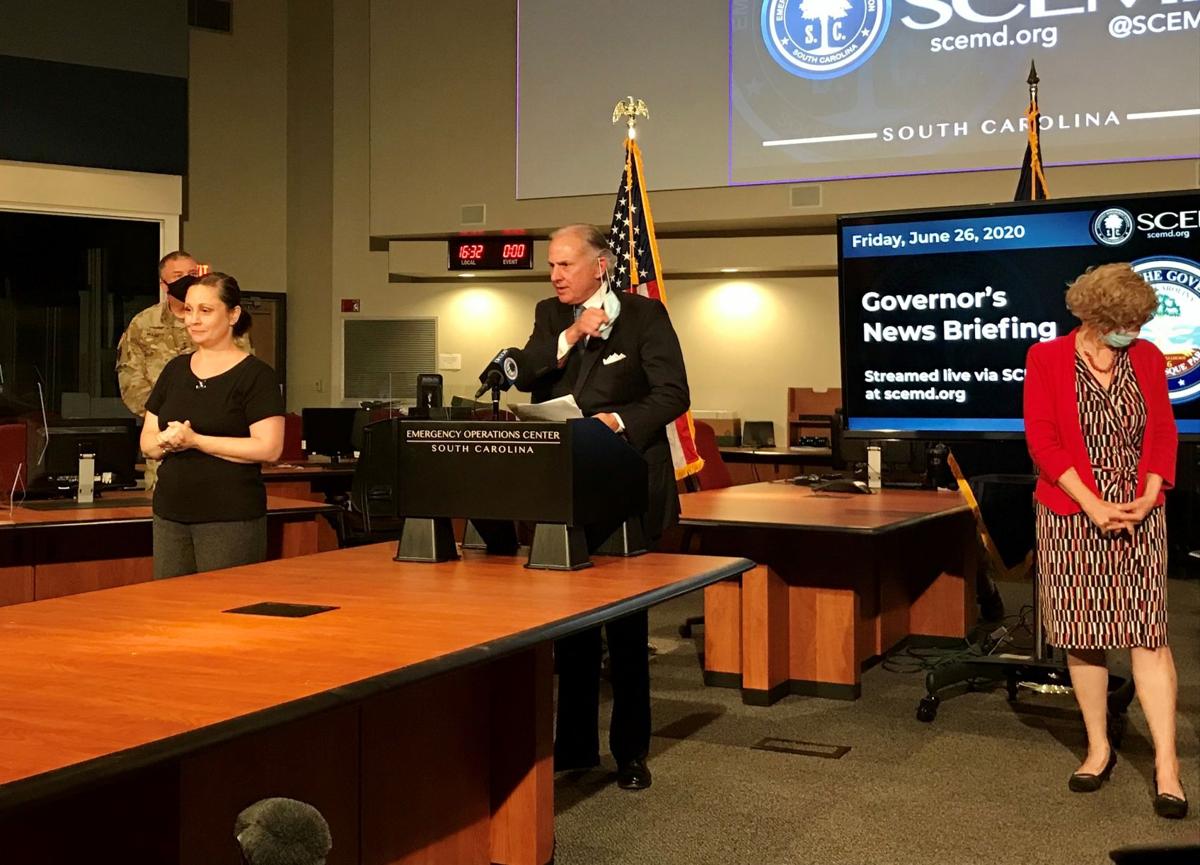 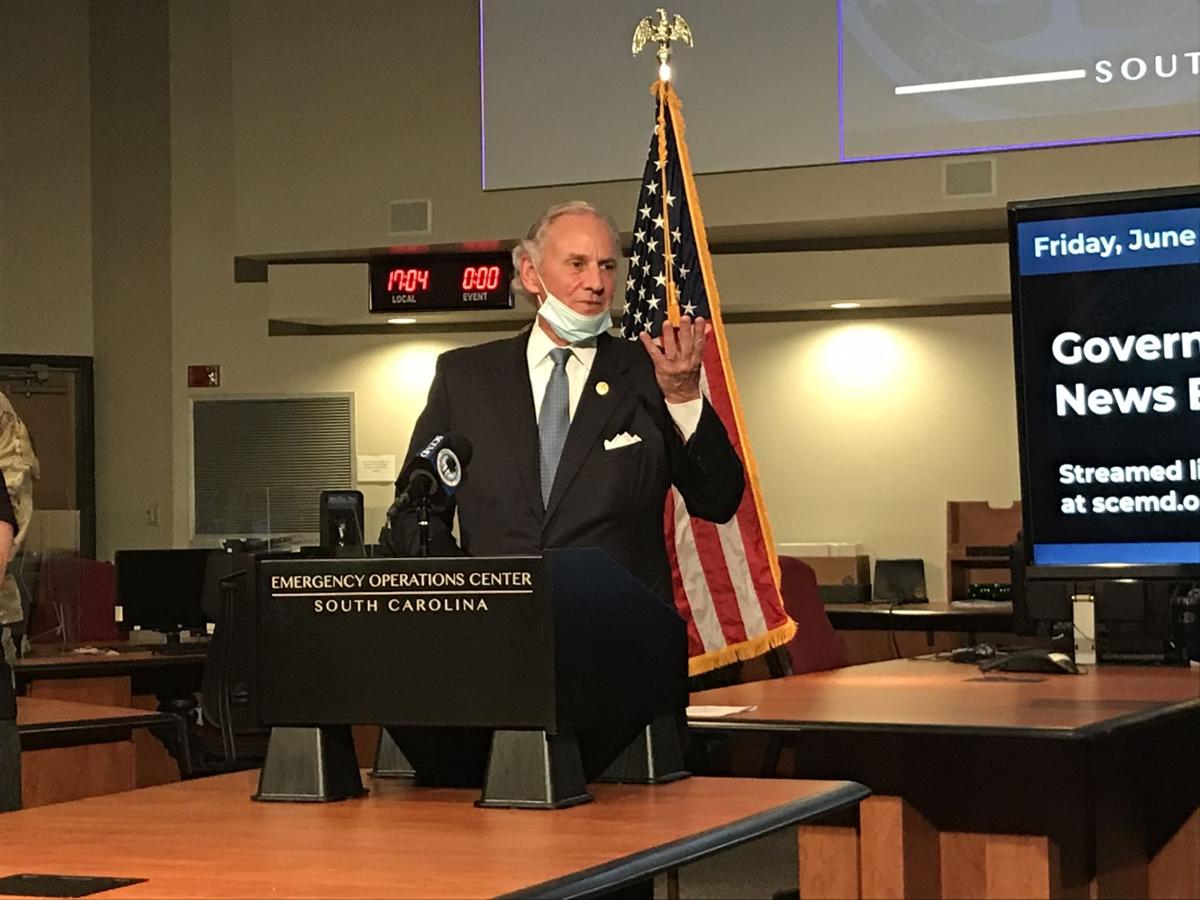 WEST COLUMBIA — Gov. Henry McMaster pleaded with South Carolinians on Friday to wear masks to get COVID-19 under control in a state that's become a national hotspot, but he reiterated he won't impose a statewide mandate.

"This is a dangerous, deadly disease. You’ve got to follow the rules," the Republican governor said. "For goodness sakes, wear your masks."

If the numbers keep climbing, McMaster warned he may have to order hospitals to delay elective surgeries to free up beds, something they did voluntarily earlier in the pandemic at his request, which resulted in massive health care layoffs.

And for people who like to see a movie or a play, attend sports games, and go to concerts, he offered both a carrot and a stick: He won't lift restrictions and allow those activities to resume until the infection rate goes down, as the people who largely make up those crowds are "where the virus is really taking hold," he said.

McMaster scolded people under 40, especially, as selfishly discounting the advice, noting infection rates among younger generations are going "up, up, up." Showing no symptoms doesn't give them a pass, he said.

"We know young people have this disease and not know it and feel completely healthy, yet they are completely infected, and they can easily pass that to older people," said the 73-year-old governor.

"We’re hearing stories of groups coming back from the beach where just about everybody who was in the group is infected, and they can pass that by coughing and sneezing but also just breathing at close contact," he continued. "The older people might die from the thing. Ladies and gentlemen, we’ve got to follow the rules."

He made the plea as the state reported its second-highest daily number for people newly diagnosed, at 1,273; and its highest number of hospitalizations statewide, at 906.

"South Carolina is making national and international headlines, but not in the way we'd like," said Dr. Joan Duwve, the state's public health director, noting governors in six states have told their residents to quarantine after visiting South Carolina. South Carolina is "now one of the hot spots in the country."

Young adults who party and take trips to the beach together without practicing social distancing and wearing masks "put the health of their families and entire communities at risk," she said.

She even made a religious appeal for following guidelines, saying "our duty from a higher authority is that we love one another and care for one another."

While saying in the "strongest, most urgent terms to follow the rules," McMaster again said he would not mandate wearing masks statewide, calling that unenforceable. States that issue a mandate knowing they can't enforce it are being disingenuous, he said.

"It's up to the individual," he said. "There’s no way we can make somebody do something they don’t want to do."

SC to dramatically ramp up testing, contact tracing to stamp out coronavirus

Despite the rising numbers, the governor also announced people will be able to visit their relatives in nursing homes again, under limited circumstances. He directed the state's public health agency to come up with a plan for immediate family members only, possibly only those over a certain age.

"Those people are highly susceptible, but we do know that not having loved ones making those visits and not going into nursing homes has increased feelings of isolation, emotional, and mental strain. This kind of isolation causes unintended consequences," McMaster said.

Visitors have been banned from nursing homes and assisted living centers since March to stem the spread of COVID-19 among those most vulnerable to getting seriously ill and dying.

Despite those precautions, nursing home residents represent about half of South Carolina's nearly 700 deaths from the disease, spread by staff who may be asymptomatic.

McMaster said it's important to allow some visitation at the locked-down facilities, out of concern for people's mental health as well as the possibility that people's inability to see their loved ones over the last four months could have allowed unchecked neglect or abuse of the elderly residents.

When abuse does occur in the homes, it's generally family members who report their suspicions, said Marshall Taylor, director of the state Department of Health and Environmental Control. While inspections continue, he said, the agency needs the public's help to spot problems.

"We recognize the pain of not being able to see your relatives. We hear on a daily basis from people who haven’t seen their parents in months. We understand that," he said.