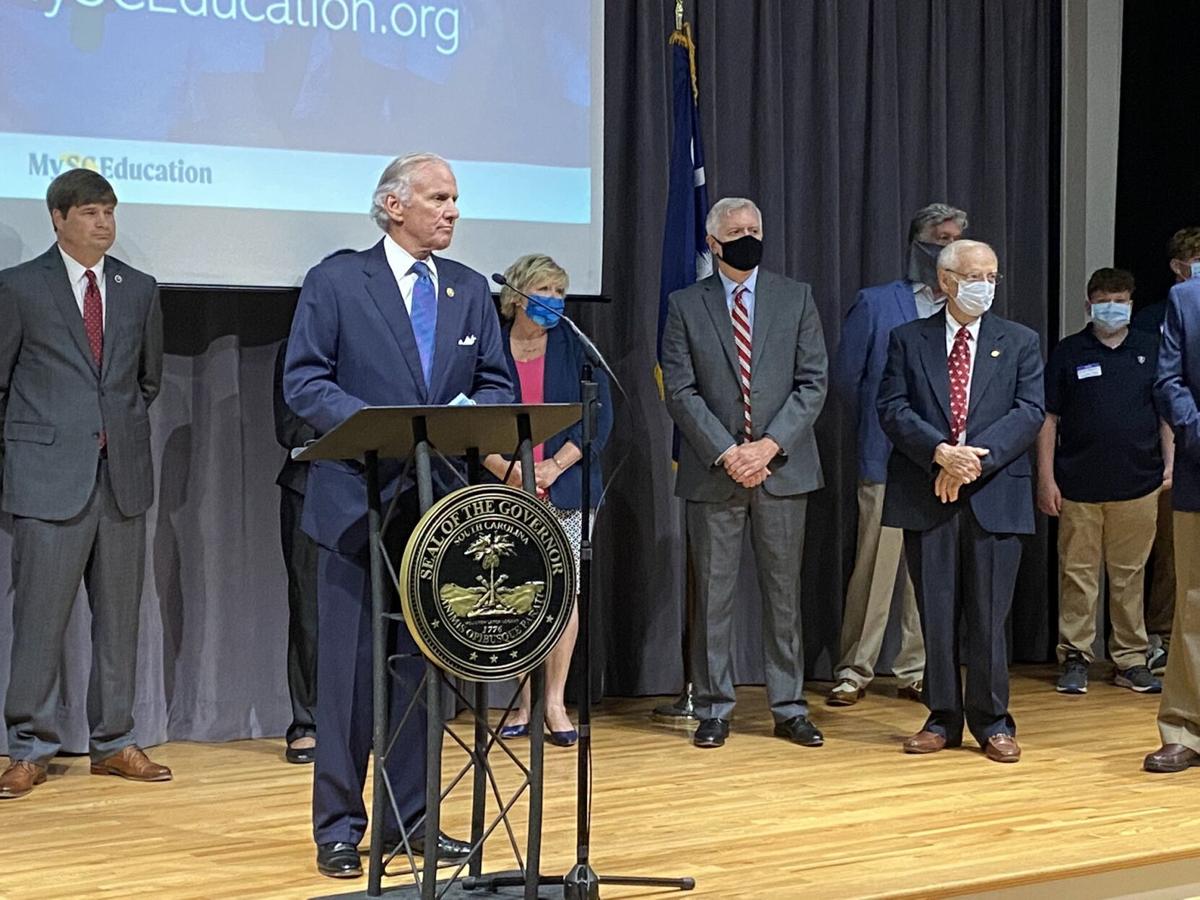 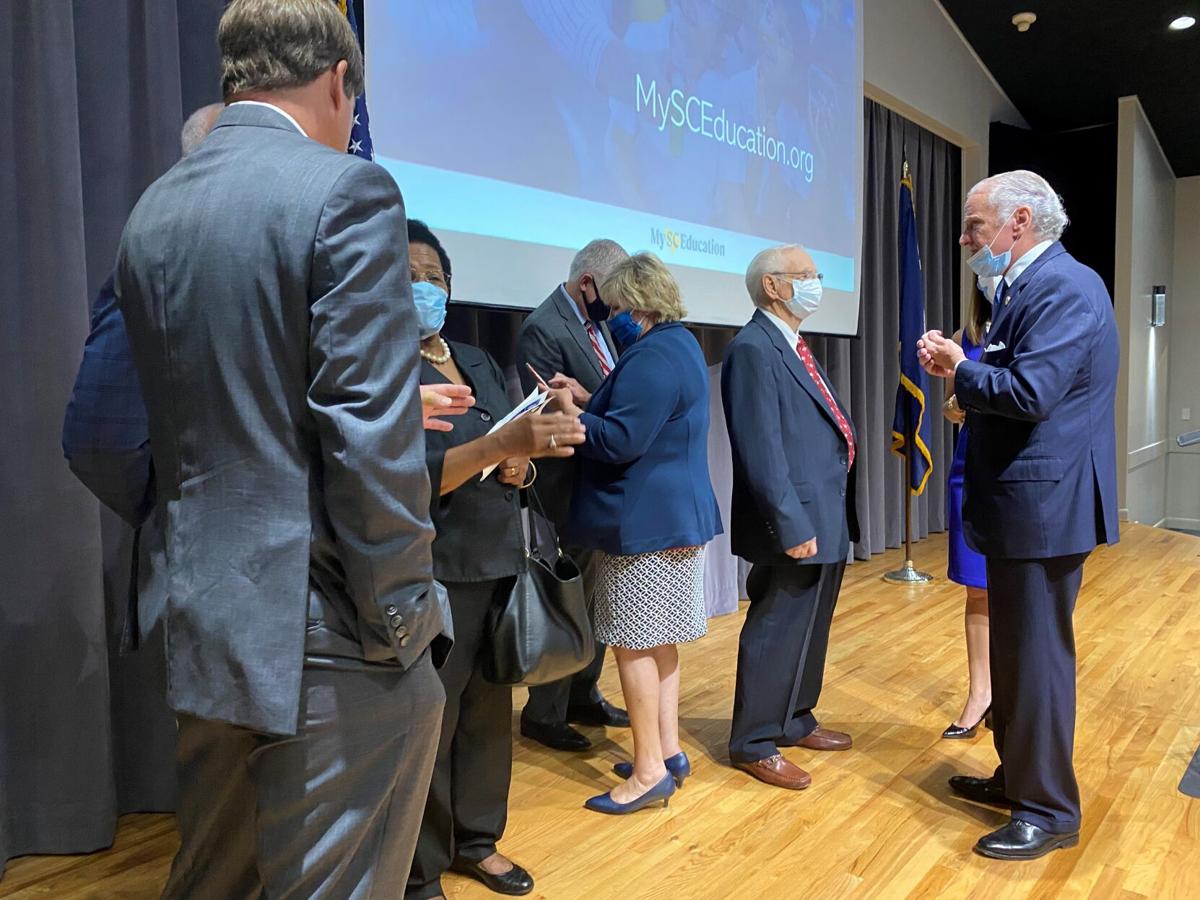 GREENVILLE — Gov. Henry McMaster announced Monday he will spend $32 million in federal coronavirus aid to fund vouchers that help parents afford private K-12 tuition in the upcoming school year, accomplishing unilaterally what advocates have tried to push through the Legislature for 16 years.

His program makes an estimated 5,000 students eligible for one-time grants of up to $6,500 each, which is roughly what the state spends, on average, per student in a public school classroom.

It's paid for through a $48 million pot of money in the federal Coronavirus Aid, Relief, and Economic Security Act sent directly to the Governor's Office for education relief. He had sole authority over how to spend it, unlike the $1.9 billion to reimburse COVID-19-related expenses, which the Legislature insisted on controlling.

“This is something these legislators have been promising for a number of years,” McMaster said at Hampton Park Christian School in Greenville, surrounded by supportive state legislators.

McMaster touted the idea as helping working and low-income parents, as eligibility is tied to federal poverty guidelines. But by setting the cap at 300 percent of poverty, many parents not considered poor, certainly by South Carolina's standards, will qualify. A single mom with one child, for instance, could make up to $51,700 and a two-parent household, with two children, could make up to $78,600.

While the vouchers are officially a one-time offer, McMaster hopes the Legislature will continue the program with state taxes.

“We don’t know what we will have in the future,” he said about state revenues.

However, advocates know that, once benefits are extended, yanking them back becomes politically difficult.

The pandemic-enabled program is similar to a now-dead Senate proposal which would have provided up to $6,600 per student. It advanced to the full Education Committee before the session was cut short by COVID-19.

But that bill advanced only after the co-sponsors drastically scaled back their original proposal, by capping eligibility to 2,000 in the first year, costing no more than $13.2 million initially. It would have eventually benefited 10,000 students after a several-year phase-in.

Still, its chances were slim, even if the session hadn't been halted. Senate Democrats had publicly announced they would block it.

It was the latest in a string of school-choice scholarship and voucher proposals that have failed since then-Gov. Mark Sanford first pushed his plan in 2004. The issue divided the GOP for years, as out-of-state donors fueled mud-slinging primaries aimed at ousting Republicans who didn't back it.

Advocates' first victory came in 2014, when legislators passed a limited scholarship program for children with disabilities, which remains the only program approved.

The $32 million amount in McMaster's program closely aligns with the estimated $33.6 million hit that private schools estimated they would take in the upcoming school year as parents, newly unable to pay for tuition amid the economic crisis, enrolled their children in public schools instead, according to a presentation in late April from the Catholic Diocese’s lobbyist to the accelerateSC task force McMaster created to help him with reopening decisions.

"During this pandemic, with so much uncertainty and anxiety facing families, a child’s displacement from the school they love and thrive at could have devastating consequences to their learning and emotional progress," McMaster said.

The announcement comes less than a week after McMaster drew harsh pushback from Greenville school officials by calling for every school district to offer parents the option of five days a week in a classroom and recommending that districts push the school start date to Sept. 8, after Labor Day.

Asked if his visit Monday was in response to the dust-up last week with public schools, the governor said the announcement had already been scheduled. He said he was in Greenville because it is “beautiful” and “because we were invited.”

His urging last week for a full-week option was not a mandate, and school boards across the state are openly ignoring the request.

McMaster said Monday private schools receiving the voucher aid would not be required to hold classes five days a week either. He also said the state will not be stipulating any safety requirements, instead leaving those in the hands of local officials.

Schools that want to participate can start signing up immediately, and families will be able to apply for tuition grants starting within the next couple of weeks, Rep. Jason Elliott, R-Greenville, told The Post and Courier.

Private schools will be eligible whether or not they received a federal loan through the Paycheck Protection Plan passed by Congress, the Governor's Office said.

Private K-12 schools received tens of millions of dollars in the forgivable loans. Four of the biggest received amounts somewhere between $2 million and $5 million, according to data released by the Small Business Administration, which did not provide specific amounts.

The governor stood on a stage with about 30 people that included supportive lawmakers, Ellen Weaver of the pro-voucher Palmetto Promise Institute, representatives of three private schools in the region and a pair of families.

Natalie Hudson was there with her husband and three sons who attend St. Joseph’s Catholic School in Anderson.

“We are working two jobs, sometimes more, to keep them there,” she said.

“We as a people have to be for everything,” Robinson-Simpson said. “Everywhere there’s money, we need to be there.”

Rep. Garry Smith, R-Greenville, said working parents need clarity about whether schools will be open for them. A long-time backer of school choice bills, he cited his daughter, a mother of four who works in health care in Florida. Smith said his wife spent a month in Florida helping to look after the kids when the coronavirus hit.

“We’ve got to give these families an option,” he said, adding that he feels the back-to-school plan pitched by Greenville County Schools is overly complicated.

Greenville County Schools, the state’s largest school district with more than 77,000 students, is offering a hybrid and fully virtual options. Its hybrid model involves splitting students into four groups, based on the first letter of students’ last names, to come to school one or two days a week, depending on COVID-19 infection rates.

Earlier this month, McMaster announced that $2.4 million of the federal aid money for education that he controls would go toward the state's historically black colleges and universities.

Maria Aselage, spokeswoman for the Roman Catholic Diocese of Charleston: “We applaud Gov. McMaster for ensuring South Carolina students can remain in the schools of their choice during these incredibly challenging times. This program will provide families across our state the stability they deserve as they face economic hardship and an uncertain future due to COVID-19. We look forward to welcoming new students into our Catholic classrooms in the fall.”

Ellen Weaver, president of the pro-voucher group Palmetto Promise Institute: “COVID-19 hasn’t discriminated between the learning and health of public and private school students and neither should we. Congress clearly intended all students to benefit from these resources. While public schools receive the lion’s share of CARES Act funding, every student’s education has been impacted, and every student deserves our help. I applaud Gov. McMaster for his bold leadership in creating this program to support students wherever they learn.”

The Palmetto State Teachers Association: "(PSTA) is disappointed in Gov. McMaster’s decision to direct $32 million in federal GEER (Governor’s Emergency Education Relief) funding to the new “SAFE grant” scholarship program. At a time where South Carolina’s public schools are faced with unprecedented operational challenges due to the coronavirus pandemic, these funds could be better used by ensuring our public schools have as many resources as possible to ensure a safe return to in-person instruction when public health conditions make it possible to do so."

South Carolina School Boards Association: "The challenges that many of our state’s rural and high poverty public schools must tackle on a daily basis are great during the best of times, much less during a pandemic that is disproportionately attacking the very citizens in the areas these public schools are located. The governor’s decision not to direct more than 65 percent of his emergency coronavirus funding to assist the most disadvantaged students, and instead give it to more advantaged students ($6,500 to a family of four that makes $78,000 — 300 percent poverty) to stay in private schools is unfathomable."