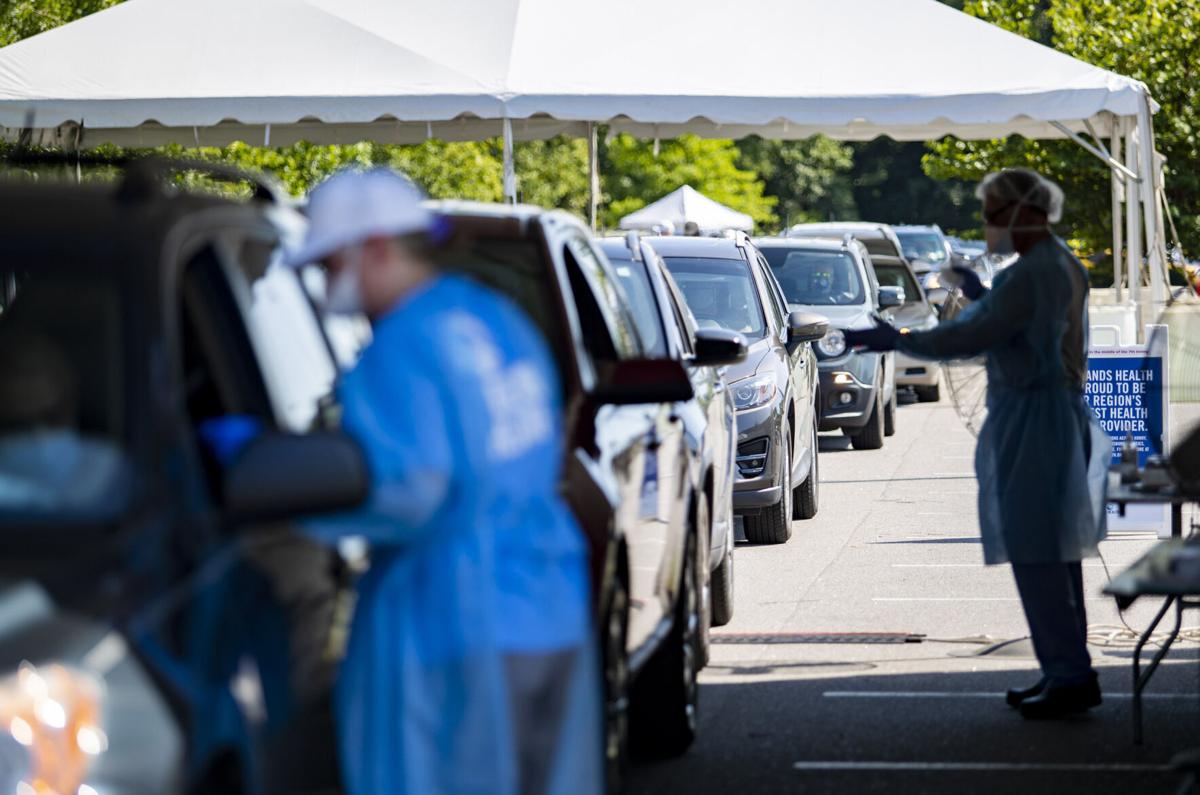 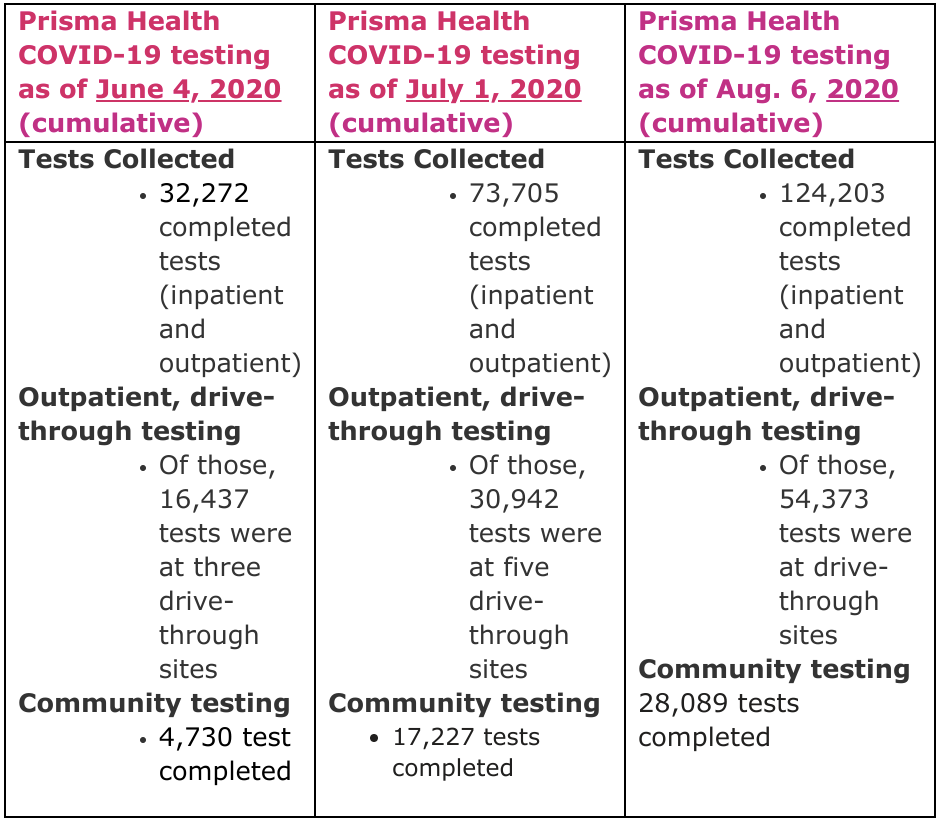 Prisma Health has conducted more than 124,000 coronavirus tests across the Upstate and Midlands. Prisma Health/Provided

South Carolina needed less than half a year to reach 100,000 coronavirus cases, enough to infect the populations of Spartanburg, Myrtle Beach, Orangeburg and Beaufort — combined.

“It’s sobering,” said Dr. Chris McLain, chief physician officer at Roper St. Francis Healthcare in Charleston. “That number should be a clear message to those who refuse to take this disease seriously.”

The fight has been costly. Close to 2,000 South Carolinians have died in the 157 days since the state's first case was reported.

The state's public health agency has spent $27 million of its COVID-19 response money through the end of July and expects to need six times more, $198 million, by the end of the year, according to a report submitted last week to a legislative panel.

Recent falling case numbers have created some hope, but the drop is coupled with problems getting test results with ongoing supply shortages and lab backlogs. Some South Carolinians are still waiting up to 10 days for results.

And the percent of positive tests, a key indicator of how the coronavirus is spreading, remains among the nation's highest.

Yet life continues as South Carolina will become the 15th state to reach the 100,000 mark, according to data collected by The COVID Tracking Project. Nine states with bigger populations than South Carolina have posted fewer cases.

This weekend, state-sanctioned mass gatherings resumed again from a drag race in Greer to a sidewalk sale in Columbia to the shows at Medieval Times in Myrtle Beach.

Next week, 16 public school districts and a majority of the state's four-year public colleges reopen. Many will offer in-person classes.

Crowds still gather at big-box retailers. Beaches and lakes are packed. South Carolinians can head to the gym, get manicures, go bowling and eat inside their favorite restaurants.

The experience, however, is different.

Stores have marked floors to space apart shoppers. Cashiers work behind plastic shields. Restaurants have separated tables and now must ban anyone from standing in the bar.

And face coverings are more common. More than 80 cities and counties, representing close to half the state's population, have passed mandatory mask ordinances — moves that health experts think could help stabilize case numbers.

Despite a recent dip in daily case counts, South Carolina is not out of the COVID-19 danger zone as it passes the 100,000 mark, as early as Sunday.

Coronavirus fired across the state after Memorial Day.

Average case numbers are five times higher than they were at the traditional start of the summer season. Ahead of the busy travel time, Gov. Henry McMaster lifted a stay-at-home order and ended bans on seated dining, gyms and many stores to help boost the economy hurt by the shutdown.

Still, South Carolina, the country's 23rd largest state, ranks fifth in percent positive cases, ninth in cases per capita and 15th in total cases, according to an analysis of the data from The COVID Tracking Project as of Friday.

Nearly one in eight South Carolinians tested since the outbreak began in March have come back positive for COVID-19. The national average is roughly one in 13.

The state has ramped up testing, almost doubling monthly totals between May and July, but still lags nationally. South Carolina ranks 33rd in tests per capita with less than 15 percent of the state's 5.1 million residents having been tested. The national testing average is 18 percent.

Weekly case averages dropped by one-third since peaking three weeks ago, according to an analysis of state public health data.

“The trend shows what we’re doing is having an impact and we need to stay the course,” said Dr. Brannon Traxler, physician consultant with the S.C. Department of Health and Environment. “Together we can completely reverse our fortunes.”

But completed tests have fallen off by close to 30 percent since their peak. As a result, the percentage of positive cases remains at levels nearly twice the 10 percent rate that public health experts consider safe to stop the spread of the virus.

Because the positivity rate has plateaued at such a high level in South Carolina, the state still has community spread, said Dr. Amesh Adalja, an infectious disease physician and senior scholar at Johns Hopkins Center for Health Security. But it could signal upcoming improvement.

“The fact that it’s holding is not as good, but it tells you there may be some stability going on in the spread,” Adalja said. “It means there’s more work to be done but it’s a good sign.”

“Throughout the pandemic, we’re always going to be undercounting cases,” he said, as those with mild symptoms may not know they have the virus or may choose not to get tested, especially if it involves standing in line for a long period.

DHEC continues to provide estimates that nine additional people are infected for every positive case.

Traxler said DHEC will have data this week on the effectiveness of local mask ordinances in preventing spread. McMaster has refused to back a mandate like more than 30 other states, saying he does not think it's enforceable.

Deaths follow a spike in cases. Roughly 40 percent of South Carolina's confirmed COVID-19 deaths, close to 800, have taken place in the past three weeks.

The recent increase in COVID-19 deaths is directly related to the mid-June spike in infections, as these typically happen two to four weeks after diagnosis, said Dr. Mike Sweat, director of the Center for Global Health at MUSC.

"In the Charleston area, the number of new cases diagnosed has declined significantly in the past several weeks," Sweat said. "We would thus predict that the number of deaths will soon also begin to decline."

S.C. hospitals report they are seeing increases in testing.

But the results are not always coming back fast enough to get counted in recent state data.

No one knows how many coronavirus tests are being run in SC, even as efforts ramp up

Roper and MUSC — both in the state's top spot for cases, Charleston County — as well as Prisma said they are getting test result turnarounds in a day, sometimes hours, at their hospitals.

Results from community pop-up sites and other outpatient testing, however, can take about four to 10 days, a longer wait than a month ago.

The recent drop in South Carolina testing numbers comes from those lab delays, caused by an influx of swabs to check and ongoing struggles to get supplies, state medical leaders said.

A national shortage on testing supplies is impacting expansion of testing in the Palmetto State, said Schipp Ames, a spokesman for the S.C Hospital Association. There is not enough of the reagent used to conduct the tests and staffing is an issue, including at the lab level. Even private labs are struggling to hire and get supplies.

“Reagents continue to be an issue with many hospitals reporting that they don’t have a reliable supply to perform (rapid results) tests in large volumes,” Ames said.

Widespread community testing, including testing of people without symptoms, is needed to reduce the virus' spread. But a shortage of supplies makes that harder, whether it's a workplace requiring all employees to be tested or someone getting tested out of an abundance of caution, Adalja said.

“Those type of tests can often clog up the whole system,” he said, even though they're needed.

And it is normal to see a higher infection positivity rate when testing is low, especially with a shortage of supplies, Adalja said. Those conducting tests become focused on spots where they know positivity is more likely to happen, such as patients coming to the hospital with symptoms rather than those tested at outpatient facilities or drive-up sites.

Asked about the declining test numbers during a call with reporters last week, Traxler said that agency is doing its best to predict where the community sites are most needed. The agency did not answer a series of questions emailed last week.

Testing will be a large portion of spending by DHEC through the end of the year.

The public health agency expects to pay out $123 million for testing by the end of the year, nearly two-thirds of all its remaining 2020 expenditures, according to the report prepared for lawmakers.

“This need for testing is not going to go away,” Adalja said.

DHEC, which had about 3,000 employees before the outbreak, has added more than 500 staff and is recruiting for another 58 jobs. The total does not include contractors. The agency reports spending $6 million on coronavirus-related personnel through July 30.

Gov. McMaster reminds MUSC to be transparent as it spends $25M in testing funds

DHEC received $42 million in federal pandemic money sent to the state and collected $45 million in emergency funding from the General Assembly.

“When the Legislature reconvenes in September, they will still have several hundred million dollars in federal coronavirus relief funds that can be devoted to DHEC’s work, if necessary,” Ames said.

Meanwhile, MUSC said it will run out of $25 million received from the state for COVID-19 work by the end of August, according a report submitted to the Legislature. Much of that went toward testing sites statewide and equipment. MUSC plans to ask for $30 million to handle work through next May.