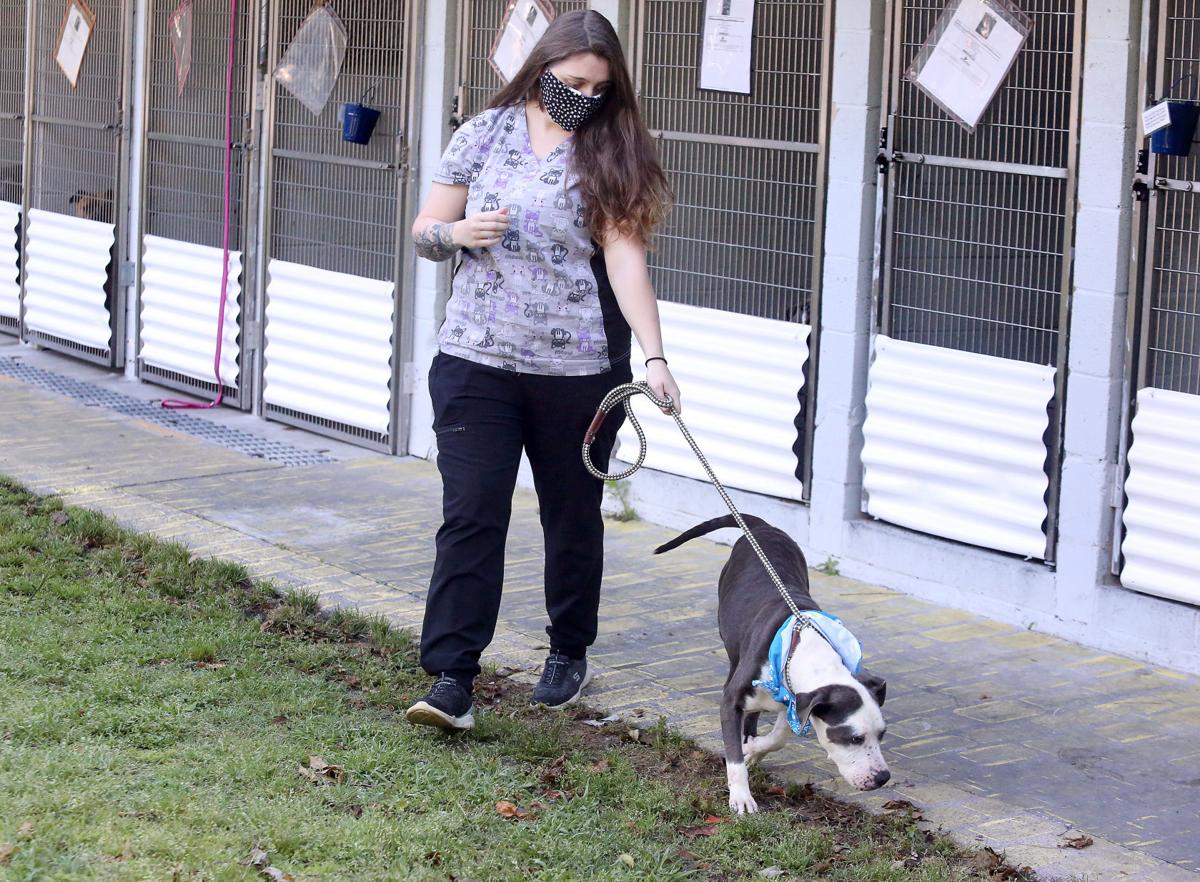 Dorchester Paws clinic tech Storm Moll walks one of the shelter dogs in 2020. The shelter won a first place honor again this year. 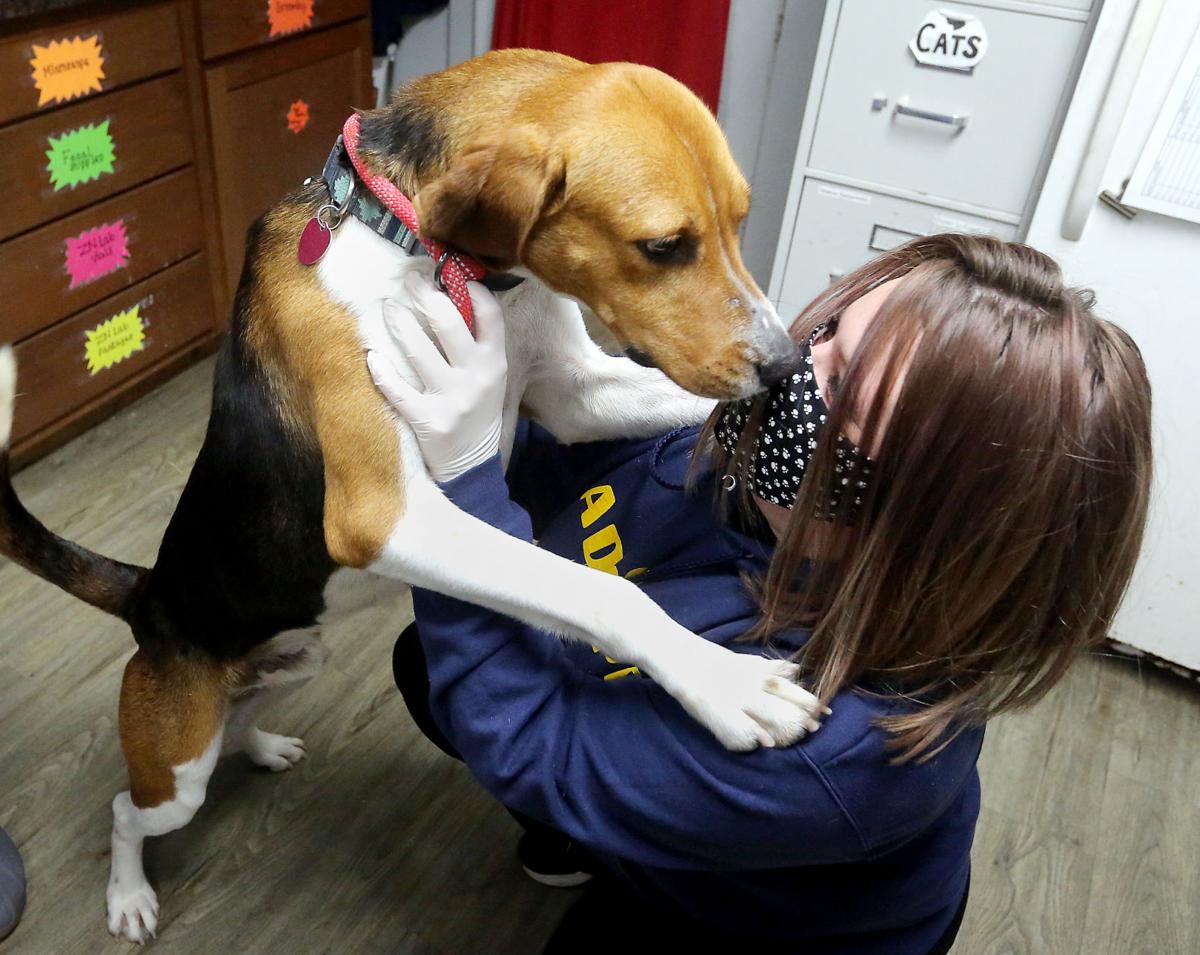 Dorchester Paws animal services manager April Howard gets a kiss from a dog that was adopted and was being picked up Friday, April 17, 2020. Brad Nettles/Staff 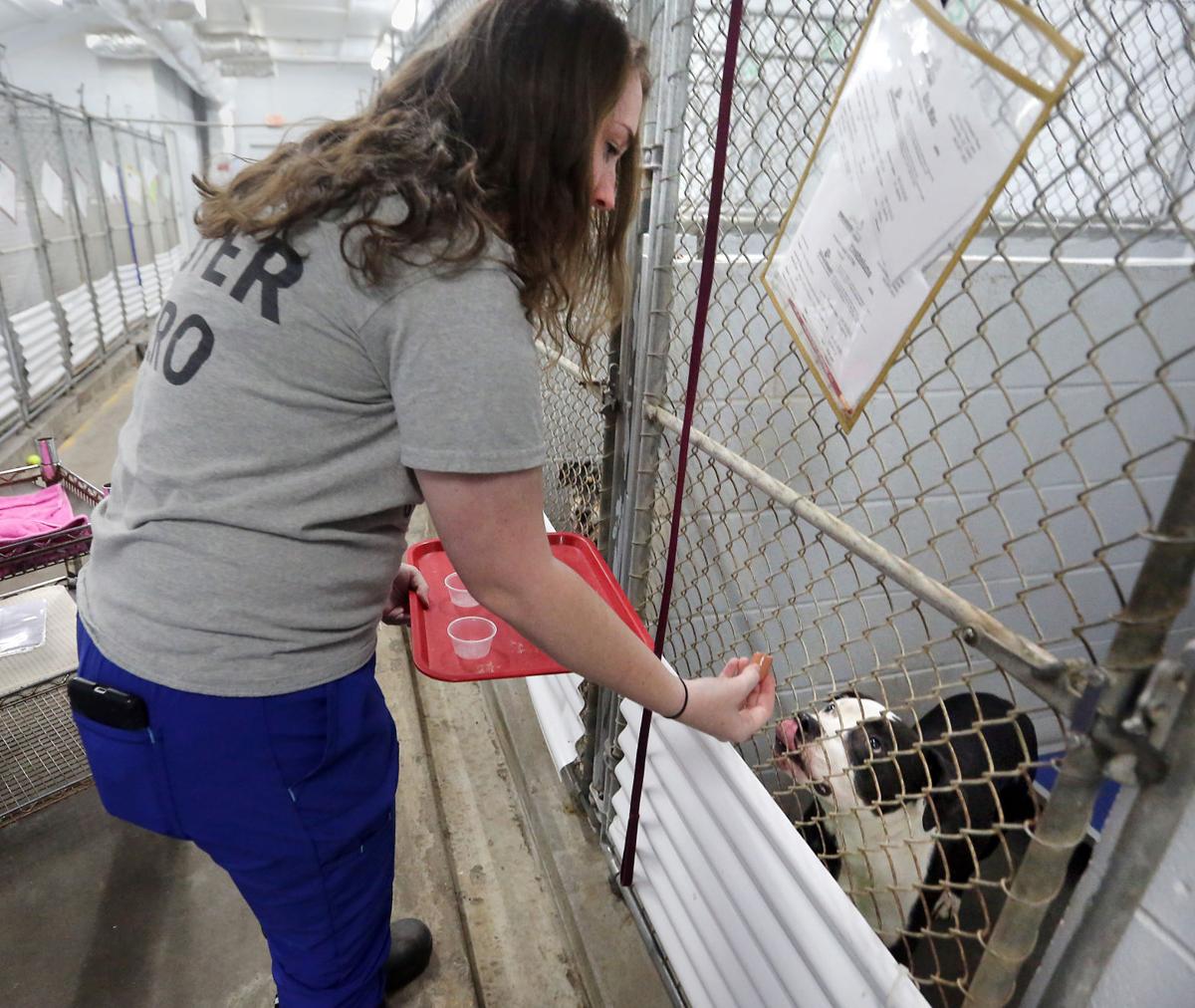 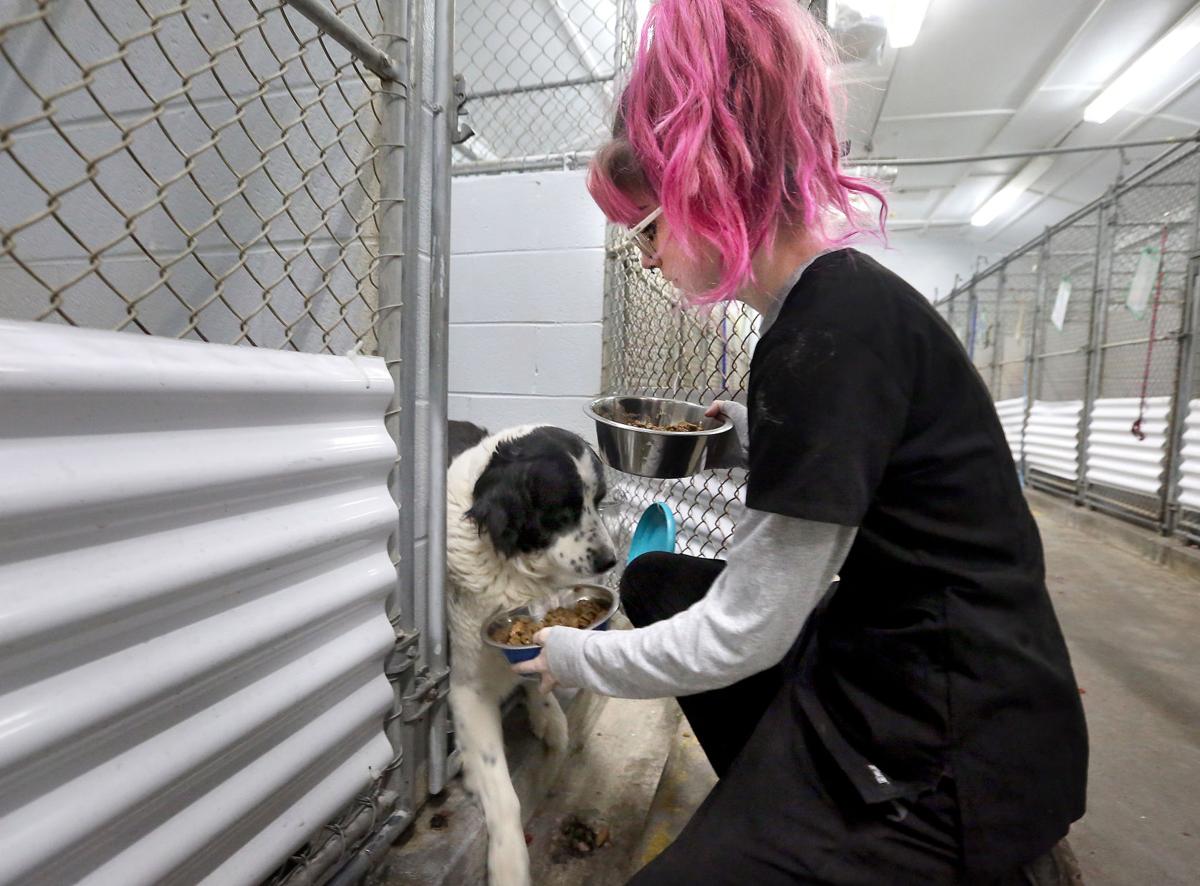 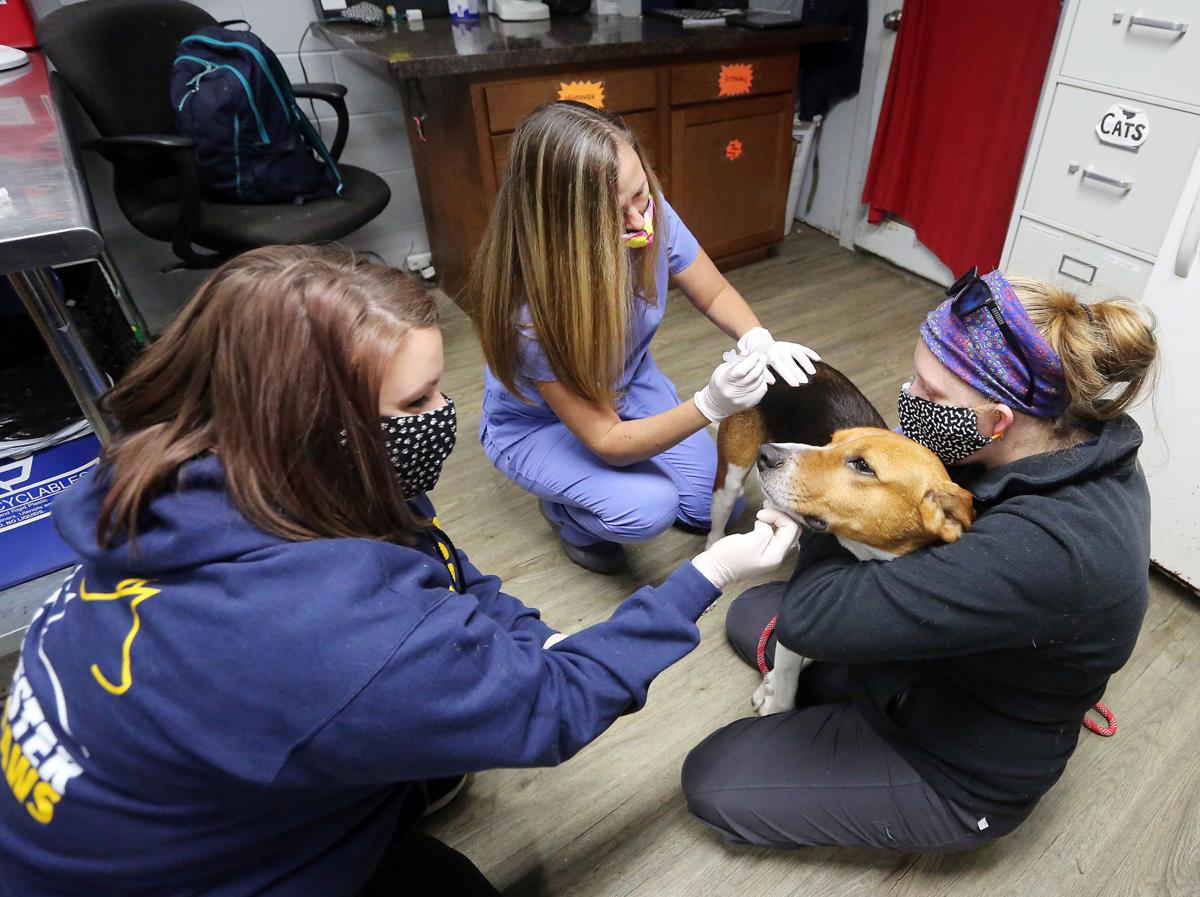 Dorchester Paws clinic tech Storm Moll walks one of the shelter dogs in 2020. The shelter won a first place honor again this year.

Only days from its highest animal-admission month, Dorchester County's only animal shelter is in trouble.

With over 4,000 coronavirus cases confirmed across South Carolina, the closing of nonessential businesses and a number of residents unemployed, donations and adoptions at Dorchester Paws have plummeted.

In comparison to this time last year, Dorchester Paws is seeing over 100 fewer adoptions. It also is down $12,000 in donations.

Kim Almstedt, executive director of the shelter, said funding is critical for the nonprofit located in a county where the population has grown by thousands over the years.

It costs $300 to $400 to care for each healthy animal that comes through the shelter. Beyond feeding and cleaning, each animal goes through a full health evaluation. This includes vaccinations and spaying or neutering.

For animals with severe health concerns, costs are often greater. If a dog comes in with heartworm issues, treatment and care costs can be up to $1,000. In one year, the shelter averages around 4,000 admissions. In 2019, the staff saw a little over 3,700 new animals.

“A lot of people don’t know what resources we put into every single dog and cat," Almstedt said.

With local animal control limiting some of its services during the pandemic, the shelter is also seeing a slight decline in the number of dogs and cats that come in.

But that's going to change soon. Storm Moll, a cat enrichment specialist and three-year staff member with the shelter, said May marks the shelter's kitten and puppy season and its highest admission month. It typically sees around 400 new animals in that month.

Now, with the pandemic causing the shelter to dramatically limit volunteers and extending the adoption process because of remote services, the staff knows it's going to be a stressful time.

This is coupled with the fact that they also work in a building constructed in 1972 that is a victim of routine flooding and consistently needs patchwork repairs.

"We're going to be operating way over capacity," said Maddie Moore, development and marketing director for the shelter.

Donations, adoption and fostering are really the main ways the surrounding community can help support Dorchester Paws, staff members say. Residents can donate and sign up to foster animals online at dorchesterpaws.org.

SC's homeless population pressured by coronavirus. There are ways to help.

It's easy to miss the Dorchester Paws facility when driving down U.S. Highway 78 in Summerville. The campus is surrounded by trees. The only thing that indicates its location is a sign sitting next to a long path that eventually leads to the hidden facility.

Someone recently left a dog in a crate beside that sign, staff recall. Because the person who left the crate didn't notify employees about the drop-off, which is illegal, the dog was left out unnoticed, likely for hours, they say.

Someone coming in for an appointment noticed the crate.

“It took most of the day to get (the dog) to trust us," said April Howard, an animal services manager with the shelter. “And he's been adopted already.”

More people surrendering their animals, legally or illegally, is one of the many things staff have to manage during the pandemic. They've also had to limit the number of staff members at the facility. But prior to the coronavirus pandemic, there were already some challenges.

Every year in September, the entire shelter has to be evacuated because of hurricanes, Almstedt said. The shelter is in such a low-lying area that its drains can't keep up, she said.

The kennels end up flooding from the inside out with sewage and waste. This year alone, the shelter has had to close twice due to flooding.

"The building itself is disintegrating," she said.

It's been nearly 50 years since the building has had a renovation. And since that time, Dorchester County's population has grown considerably. Because of this, the number of animals in need has, too.

To donate, adopt or foster animals, residents can visit the shelter's website at dorchesterpaws.org. Residents are also advised to call ahead to make appointments about surrendering pets.

Recently they raised enough money and got approval to move into a brand-new shelter in 2021 that will be located north of the crossing of Mallard and Orangeburg roads in Summerville.

This was after Dorchester County Council approved a $1 million capital contribution to the shelter in 2018. The design of the facility is slated to finish in October.

But the recent significant halt in funding is increasing the chances that the move-in date will be delayed. Staff members say they must first make sure they can function financially in their current state.

So on top of taking in a high volume of animals, staff are also having to consistently patch up an old building. This sometimes means funds that could be used to benefit the animals have to be used to make repairs around the building. Now, this could mean using some funds for the new facility to stay afloat during the pandemic.

To avoid spending another hurricane season having to fully evacuate the shelter, they hope the community will help out just a little more.

“We need those funds to make it happen," Moore said.

What the animals deserve

For a lot of the staff at the shelter, their fondest memories at Dorchester Paws are centered on what's called "foster failures," the only type of failure they promote, Moore said.

Fostering a pet means sheltering an animal at home and taking care of it until it is ready for adoption. This creates more space at the shelter, where they have 80 dog kennels and 100 cat kennels.

A foster failure is when a foster family decides to fully adopt a pet. Moll's fondest memory at the shelter is when this happened twice for an extremely shy cat named Oliver at the shelter whose original owner died.

“I’m glad that we were able to find him the right home," she said.

The hope is that in the future, more residents will look to become foster families for animals or adopt them. When this happens, the staff's job become easier.

But ultimately, the new shelter is what they look forward to the most. There, they will have more space for volunteers and animals, and they can do things like spay and neuter all pets in the community instead of just the ones they shelter.

They also will be able to put more money into activities and resources for animals that come through the shelter. That way, there will never be a reason to delay taking in any animals in need.

Majority of SC businesses being told they're essential amid coronavirus outbreak