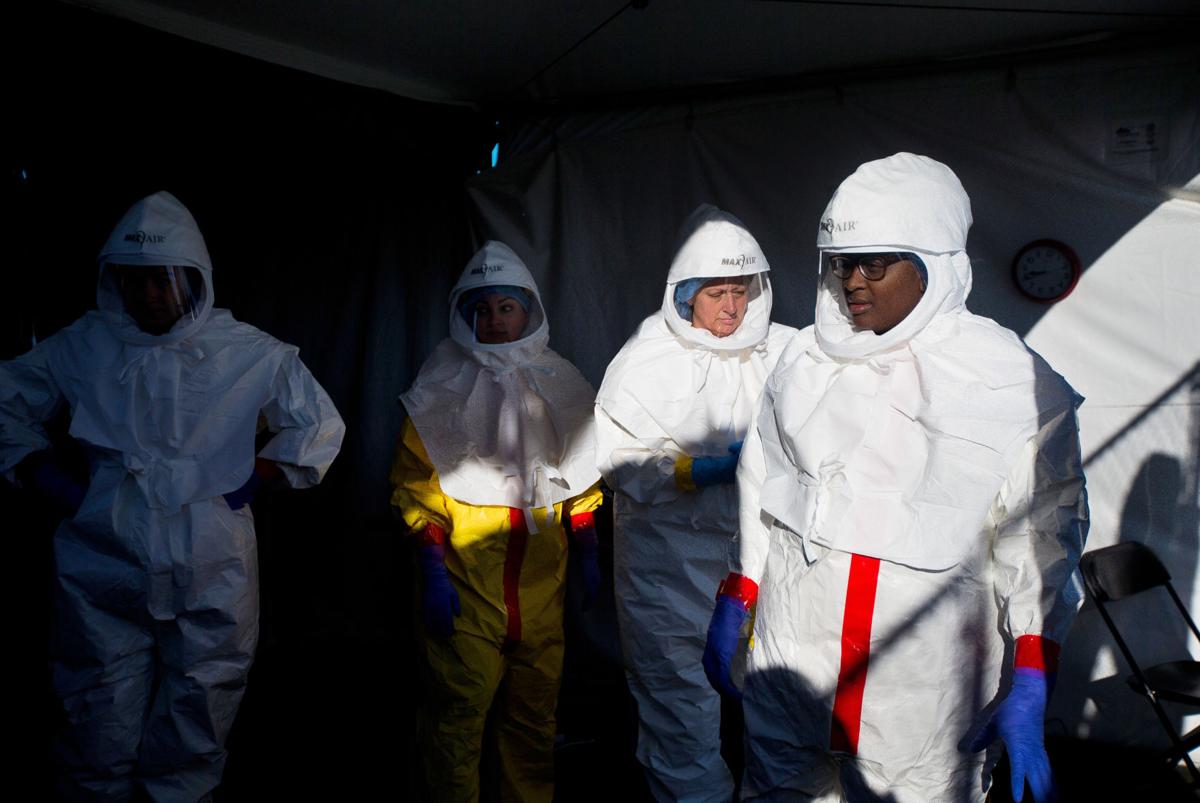 Employees put on protective equipment at the MUSC Health respiratory specimen collection site in Charleston. Experts say African Americans are at a greater risk from coronavirus because they are more likely to have underlying medical issues. File/Andrew J. Whitaker/Staff 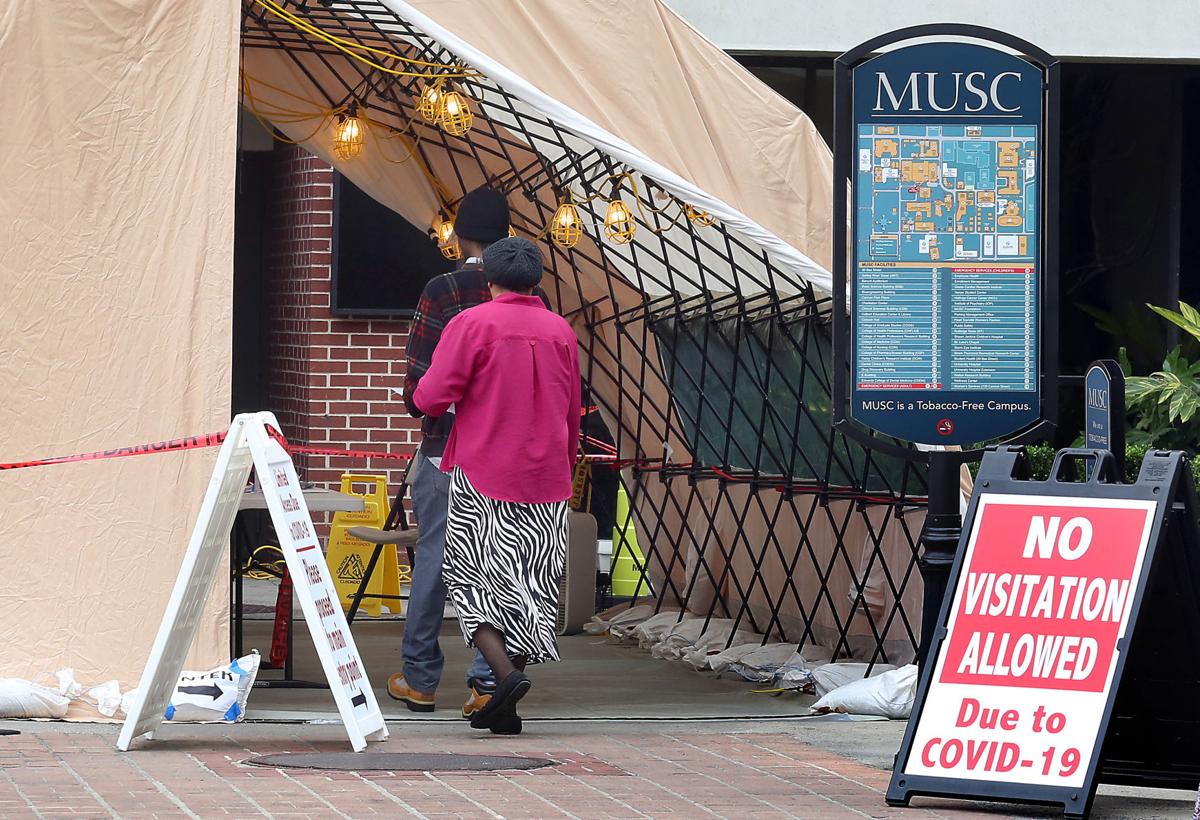 Employees put on protective equipment at the MUSC Health respiratory specimen collection site in Charleston. Experts say African Americans are at a greater risk from coronavirus because they are more likely to have underlying medical issues. File/Andrew J. Whitaker/Staff

The coronavirus pandemic has now spread to every corner of South Carolina, infecting people in all 46 counties. But the infectious disease has homed in particularly on one vulnerable demographic.

The virus is disproportionately targeting and killing black South Carolinians, according to newly released data that highlight longstanding healthcare disparities in the Palmetto State.

African Americans make up just 27 percent of the S.C. population but account for 46 percent of the Palmetto State’s deaths from COVID-19, the disease caused by coronavirus, according to figures released this week by state health officials. That’s more than any other ethnicity.

Experts say African Americans are at a greater risk from the disease because they are more likely to have underlying medical issues, such as diabetes, heart disease and lung disease. That stems in part from a historic lack of access to health care, especially in rural parts of the state, experts added.

“We know that people with these underlying chronic illnesses and chronic conditions are more predisposed, along with the elderly, to have the more severe illness and the worst outcomes for COVID-19,” said Dr. Brannon Traxler, a physician consultant with the S.C. Department of Health and Environmental Control.

The trend isn’t unique to South Carolina where the coronavirus has struck 2,792 people, killing 67.

African Americans make up just 32 percent of Louisiana’s population but account for 70 percent of the state’s COVID-related deaths. Chicago’s numbers are nearly identical.

About 40 percent of the Michigan residents who have succumbed to the disease are black, though African Americans make up just 14 percent of the population.

President Donald Trump acknowledged the issue in a news conference this week.

“Why is it three or four times more so for the black community as opposed to other people?” he said Tuesday. “It doesn’t make sense, and I don’t like it.”

S.C. health officials publish a racial breakdown of the state’s COVID-19 case once a week and added a breakdown on deaths for the first time this week.

Six of the 10 counties with South Carolina's highest infection rates have black populations above the state average.

How SC's biggest coronavirus hot spots are spread across the state

They include mostly smaller counties — Clarendon, Lee, Sumter, Fairfield and Union — as well as urban Richland County, which has the most COVID-19 cases in the state with 417.

Charleston County, with a black population that matches the state average, has the second-most cases with 313.

African Americans account for about 38 percent of the state's COVID cases so far. But that rate is probably too small, said Dr. Helmut Albrecht, chair of the Palmetto Health-USC Medical Group's Department of Medicine.

Black South Carolinians who contract the disease have a far higher mortality rate than their counterparts, data show.

African Americans have been treated unfairly in the workplace and health care arena for decades, he said. That creates a spiral in which black families can’t afford nutritious meals or preventative healthcare, he said. Medical conditions like high blood pressure and diabetes get passed down from generation to generation, Howard said.

“You’re not making much money, you’re going to go to McDonald's and get a Happy Meal rather than a healthy meal,” Howard said.

Richland County Council Chairman Paul Livingston said many African Americans have jobs that are considered "essential," putting them at or near the front lines of the crisis.

"I just think that it's something that is more systemic and historic," said Livingston, who is African American. "(African Americans) are more likely to be the ones working jobs where they might not be protected. When you look at those essential jobs outside the medical profession, many of those are held by African Americans. When you look at who's going to pick up the trash, who's stocking up in grocery stores; in most of those situations, you are looking at low-income individuals who have to go to work, whether they want to or not."

State Sen. Darrell Jackson, an African American pastor from Richland County, said the numbers point to a lack of health care coverage for many black South Carolinians, especially those living in rural areas.

“When you’re not in good health, and when your primary health care is going to emergency rooms, you have underlying conditions,” said Jackson, a Columbia Democrat. “Then COVID-19 comes, and it is primed just for that.”

Jackson believes the state's black residents would have fared better if South Carolina had joined 35 other states in accepting Medicaid expansion under the Affordable Care Act.

The state has rejected the federal money, which would have provided health coverage to more poor South Carolinians, under Republican Govs. Nikki Haley and Henry McMaster, who called it wasteful.

“Every single life is precious, and it doesn’t matter what you look like or where you come from,” McMaster spokesman Brian Symmes said. “We’re learning more and more about this virus and how it is impacting people every day. This realization is nothing short of shocking.

"With regard to Medicaid expansion, I think that this simply isn’t the time to talk about politics like this," he added. "But the evidence suggests that expansion states are experiencing the same sort of extremely unfortunate and sad discrepancies that we’re seeing.”

Albrecht, the USC physician, said there was a perception in some black communities that they wouldn't be affected by COVID — similar to decades ago when many Americans thought only gay men could get HIV.

He recommended more outreach by local officials and civic leaders to stress the importance of social distancing.

"It's working," he said. "And if it's not done in the African American communities, it's going to get worse."

Columbia Mayor Steve Benjamin has pushed for more COVID-19 testing, arguing more data could prove useful in tamping down the spread of the virus, especially in black communities.

"It highlights an Achilles heel in U.S. health policy," said Benjamin, who is the first African American mayor in the capital city's history.

Columbia recently inked a $150,000 deal with a private lab in Greenville for thousands of coronavirus tests, which will initially be focused on first responders and other front-line employees in the city government but could also be deployed to the private sector in an emergency. North Columbia and adjoining areas in Northeast Richland County make up the state's largest cluster of COVID-19 cases, according to an analysis of state data.

"This country, this state, this city and those (African American neighborhoods) in the east central part of town and North Columbia will continue to suffer if we don't begin to get our arms around decelerating this pandemic through appropriate and aggressive testing, so that people can get back to work," Benjamin said. "The reality is, we are dealing with the first wave. We need to invest early to mitigate the resurgence of the virus in wave two and wave three."

Chris Trainor and Andy Shain contributed to this story.