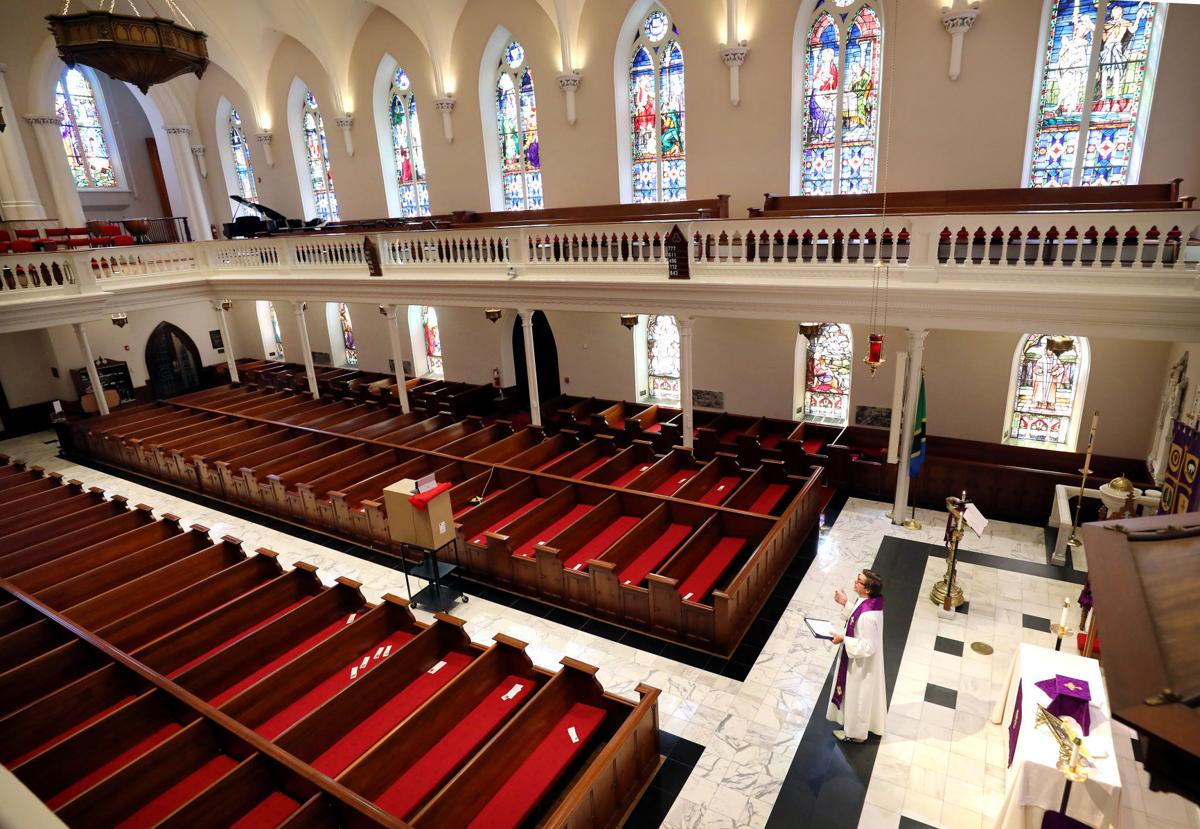 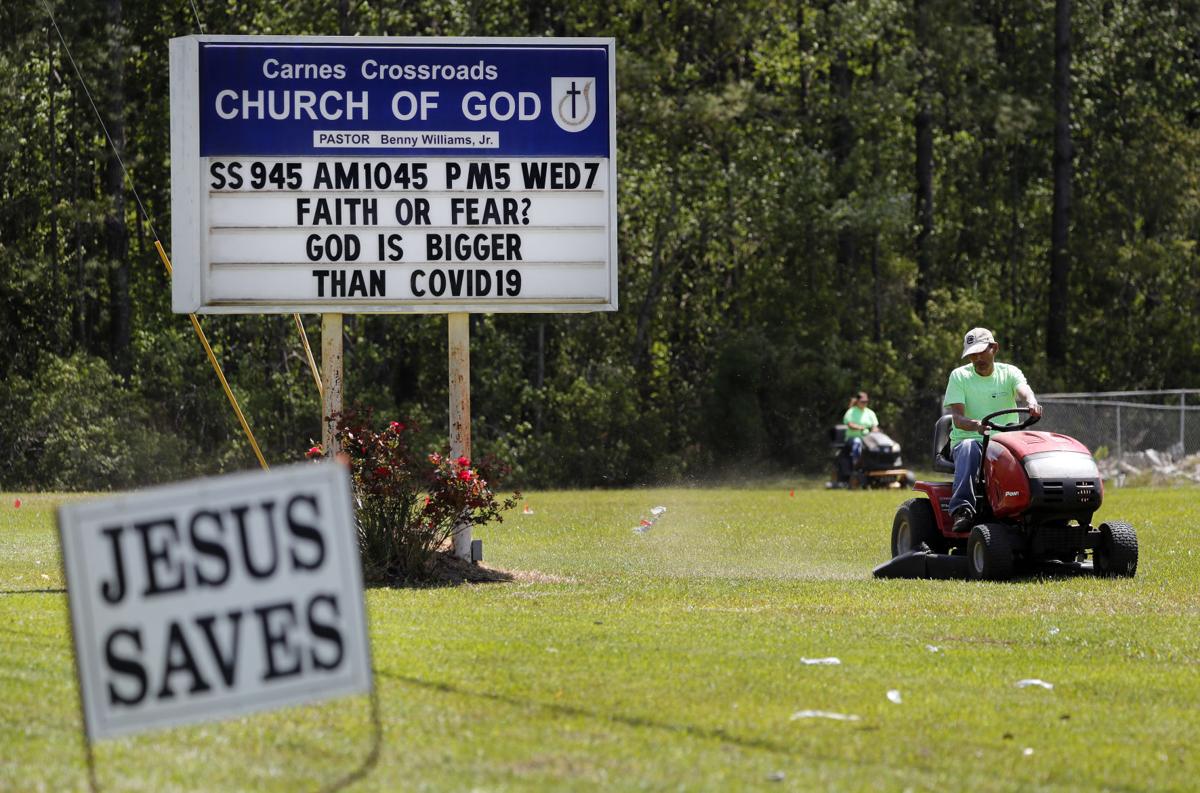 Reyes Guzman, who is a member of Carnes Crossroads Church of God, cuts the grass Friday, April 10, 2020, in Goose Creek. File/Grace Beahm Alford/Staff 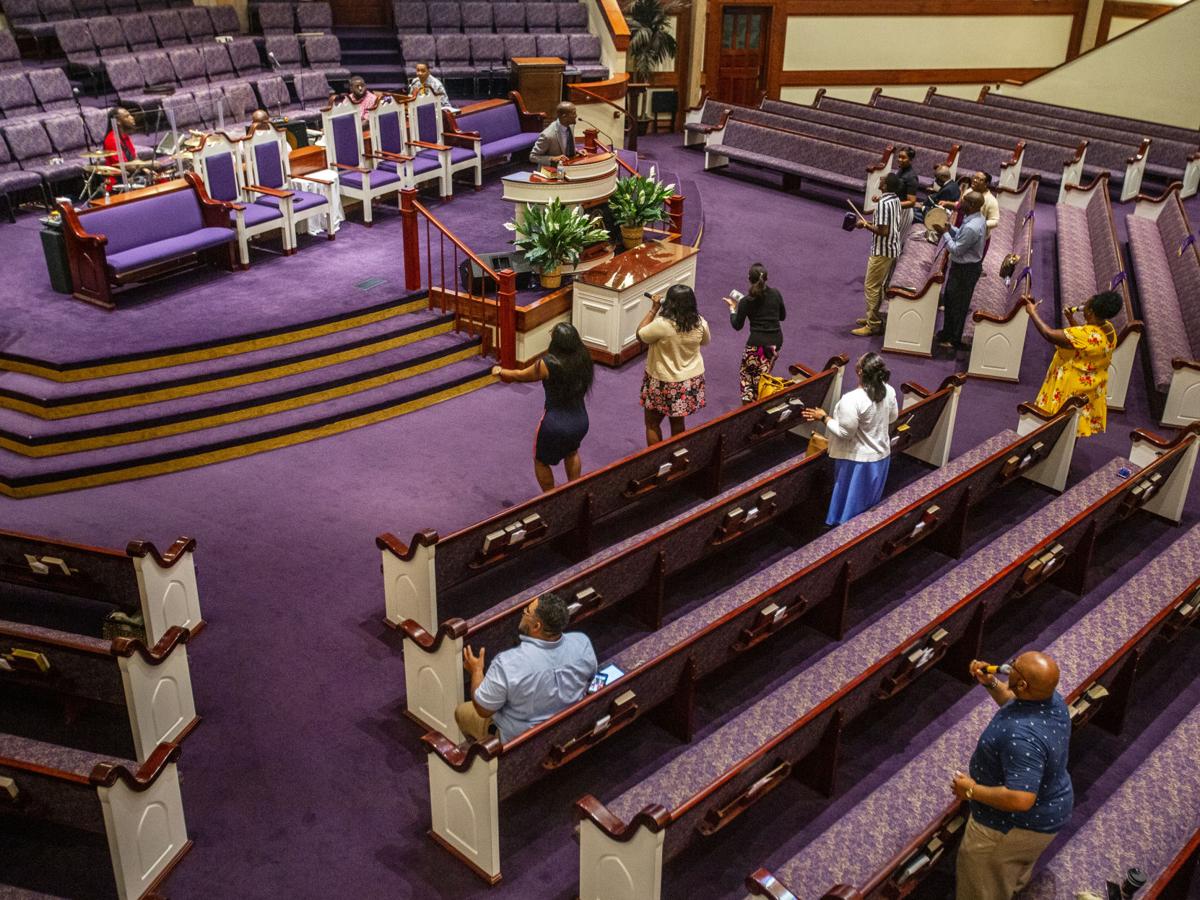 COLUMBIA — Pews without hymnals or Bibles. Empty, or nearly empty, choir lofts. Staggered seating. And air hugs only — at a distance.

Those are among the changes people can expect as South Carolina's houses of worship resume in-person services. When that will be is up to the leaders of each congregation.

Unlike governors in other states, Gov. Henry McMaster never restricted religious services, saying he could not trample on that First Amendment right. But he did encourage churches before Easter — during Christians' holiest week — to either stream services online or take them outdoors. Most had already done so voluntarily out of concerns for their flock, especially since many who fill the pews are in the high-risk categories most susceptible to COVID-19 becoming fatal.

But as McMaster rolled back his restrictions — starting with public boat ramps April 17 and most recently with youth sports leagues, which can return to athletic fields Saturday — houses of worship looked to reopen, too.

"I’m getting a lot of calls from preachers and pastors very interested in opening churches. You can imagine that if the bars are being opened, they want to know when church is going to be open," state Rep. David Weeks, D-Sumter, said during the May 19 meeting of McMaster's accelerateSC task force, created to advise the governor on reopening decisions.

"I know we never restricted them," he said. "But I think getting something that comes from the governor’s office really makes a difference in them doing whatever they’re going to try to do next."

He was pointed to guidelines quietly posted earlier this month on accelerateSC's web page.

South Carolina was among 15 states, including Georgia and Florida, that never impeded religious gatherings. So, while President Donald Trump's May 22 declaration which deemed places of worship "essential" got a lot of attention and prompted a lot of calls to McMaster's office, it didn't apply to the Palmetto State, where their ability to hold in-person services never ended.

According to the Pew Research Center, 10 states banned services completely in an effort to stem the spread of COVID-19. Those included New York, Illinois and California, where a group of churches sued in federal court, so far unsuccessfully. Other states, including North Carolina, limited gatherings to 10 people.

It may take that many people just to record a service to post online, as many places of worship in South Carolina did voluntarily. Others, particularly in rural communities where online streaming isn't an option, held services outdoors with members seated in vehicles, on tailgates or folding chairs spaced 6 feet apart.

For religious institutions choosing to go back inside with in-person services, state guidelines include removing items from pews, such as hymnals; no longer passing offering plates; and discouraging handshakes and hugs.

They're asked to encourage high-risk members — people over 65 and those with underlying conditions such as heart disease and diabetes — to stay home. For those and others wary of returning, online viewing options should continue, say the guidelines dated May 6.

The single page of guidelines also includes the same basic advice listed for all organizations, which includes asking everyone to stay at least 6 feet away from people who don't live in their household and to "strongly consider wearing a cloth face covering."

"We need to live by prayer and Purell," said Mike Hamlet, senior pastor of First Baptist North Spartanburg, a member of the accelerateSC task force.

Safety precautions taken beyond the state guidelines included marking the pews for social distancing, keeping doors open so no one has to touch handles and adding a service to keep the numbers down. Crowding turned out not to be a problem, Hamlet said.

For churches that offer more than one service, other ways they're maintaining social distancing include asking members to sign up for a certain time.

South Carolina's Catholic parishes, which began welcoming members back inside May 11, have been asked to keep capacity below 25 percent. At Saint Mary's Catholic Church in Greenville, that meant dividing the congregation into four parts and assigning which mass they could attend, starting May 16.

Until the "all clear is given," communion does not involve drinking from a chalice, and members walk to the alter single file, maintaining 6 feet of separation. Instead of a 30-person choir, a half-dozen people lead the singing, each at least 10 feet apart, said Father Jay Scott Newman.

The diocese's 25 percent capacity guidelines limit each service at Saint Mary's to 115. So far, no more than 80 have attended. But Newman rejoiced at having any size back after two months of online-only services.

"Suddenly there was a congregation again," he said, recalling tears streaming down his face as he preached to an empty church on Easter. "It was transformative for me. To have them present and hear their voices ... was a great blessing."

Thankfully, he said, no one in his congregation has been infected by COVID-19, that he knows of anyway.

"Going forward, we’re going to have to be courageous, not reckless, and do the best we can to minimize risk and, of course, protect the vulnerable," Newman said. "But there's no such thing as a risk-free environment."

Many churches don't plan to resume in-person services until sometime in June.

Eric Childers, senior pastor at St. Matthew's Lutheran Church in downtown Charleston, said his church leaders initially planned to bring parishioners back in early June, but "we don't feel comfortable with the infection trends," so in-person services may be pushed to late June, or beyond.

At least some synagogues have no timeline at all for resuming — at any capacity.

"We're guided by Jewish values, which the highest value is protecting life," said Rabbi Sabine Meyer of the Tree of Life Congregation in Columbia. "We will not gather until we can guarantee even the most vulnerable in our community is safe."

Her congregation has held Zoom meetings since mid-March. Future services will be streamed online, she said.

'A moment they won't have again'

As of Friday, more than 11,000 South Carolinians have been diagnosed with the disease that has no vaccine; 483 of them have died since the first cases were reported in the state in early March.

Some of the highest infection rates are in rural counties, partly due to a lack of access to health care, local news and high-speed internet to search for data. The state health agency's plan for ramping up testing focuses on rural areas, but people need to know where they can get a test and how to act responsibly to protect themselves and others, task force members said.

"Our churches need to lead in that area," Hamlet said.

He added, "There is a moment on that first day, that pastor will have a platform he will not have again. They are going to hear what he says about this issue. There's going to be an opportunity in that moment. When they walk back in there, they're expecting him to say something. This is our responsibility, and we're going to do it together."