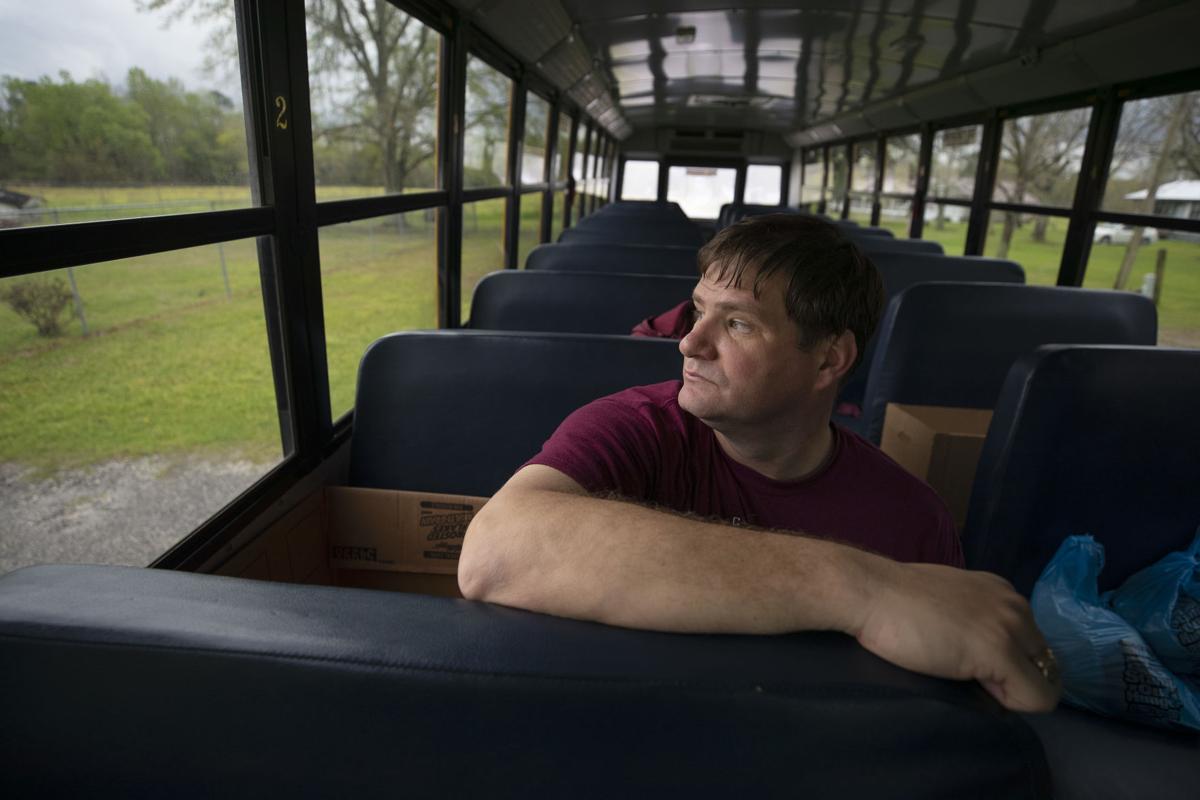 C.E. Murray High School football coach Brian Smith waits for a student to come out to get meals on Wednesday, March 25, 2020. Lauren Petracca/Staff 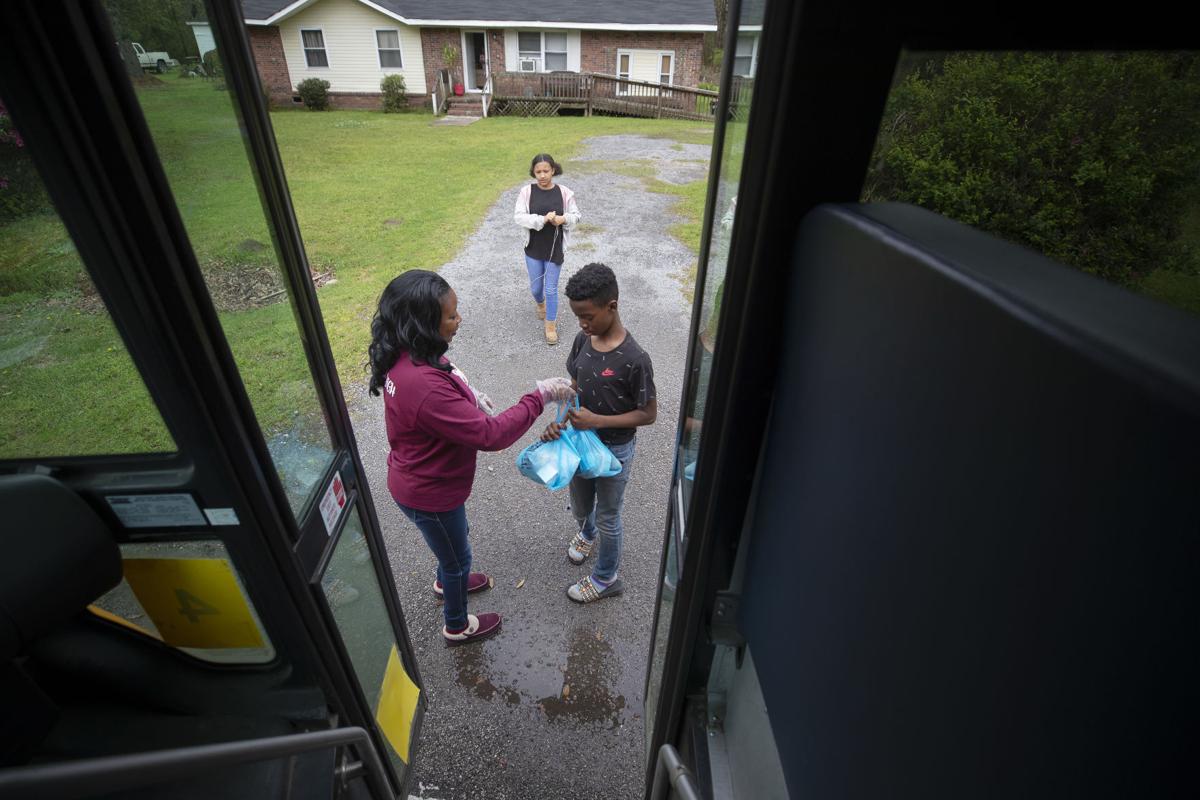 Jordan Burgess and Tonee Reid, students in Williamsburg County, get meals delivered by Evelina Jones, a kindergarten assistant, while schools are closed due to the coronavirus. Lauren Petracca/Staff 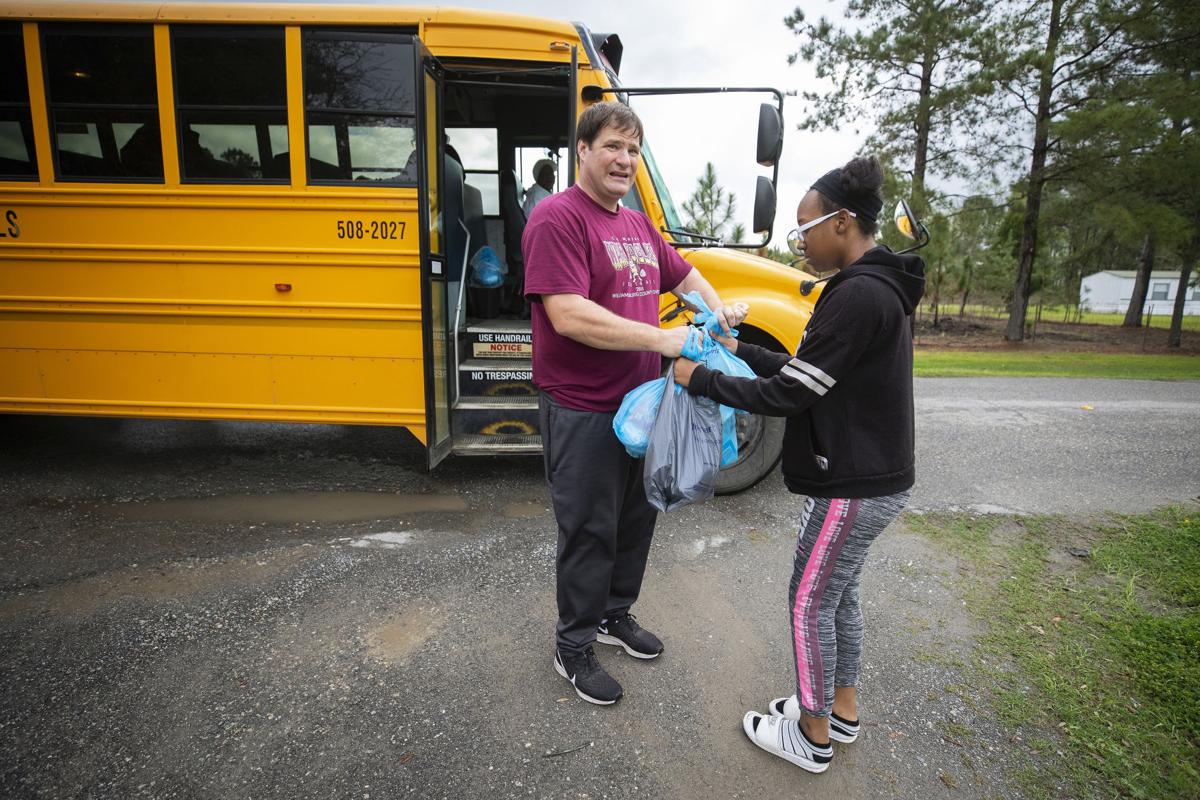 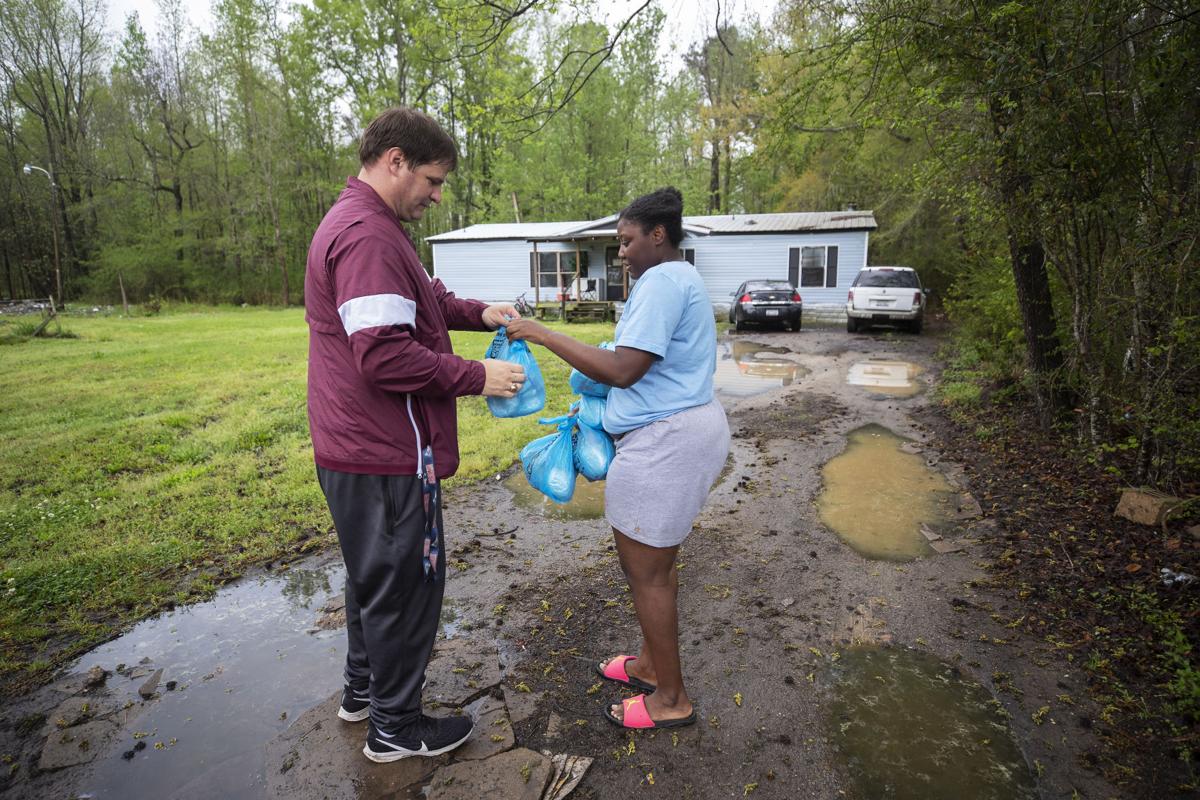 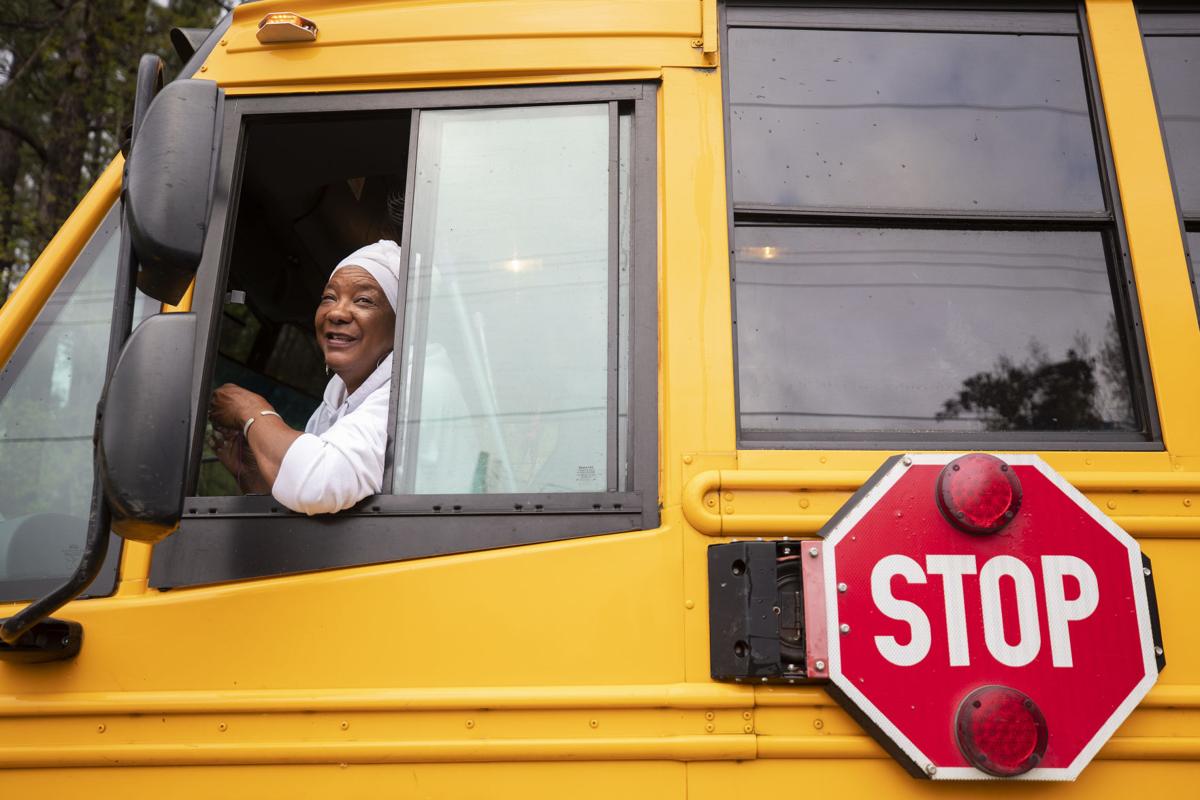 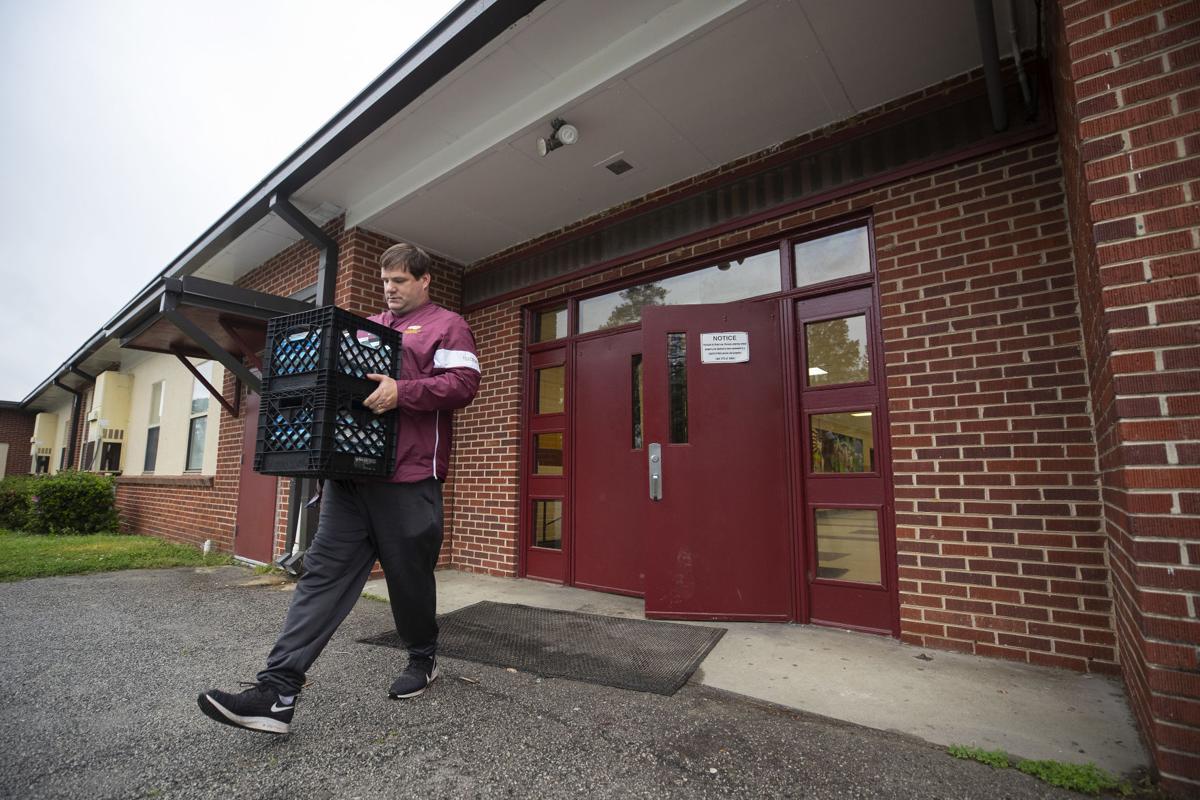 C.E. Murray High School football coach Brian Smith carries out cartons of milk to deliver to students in Greeleyville while school is shut down due to the coronavirus. Lauren Petracca/Staff 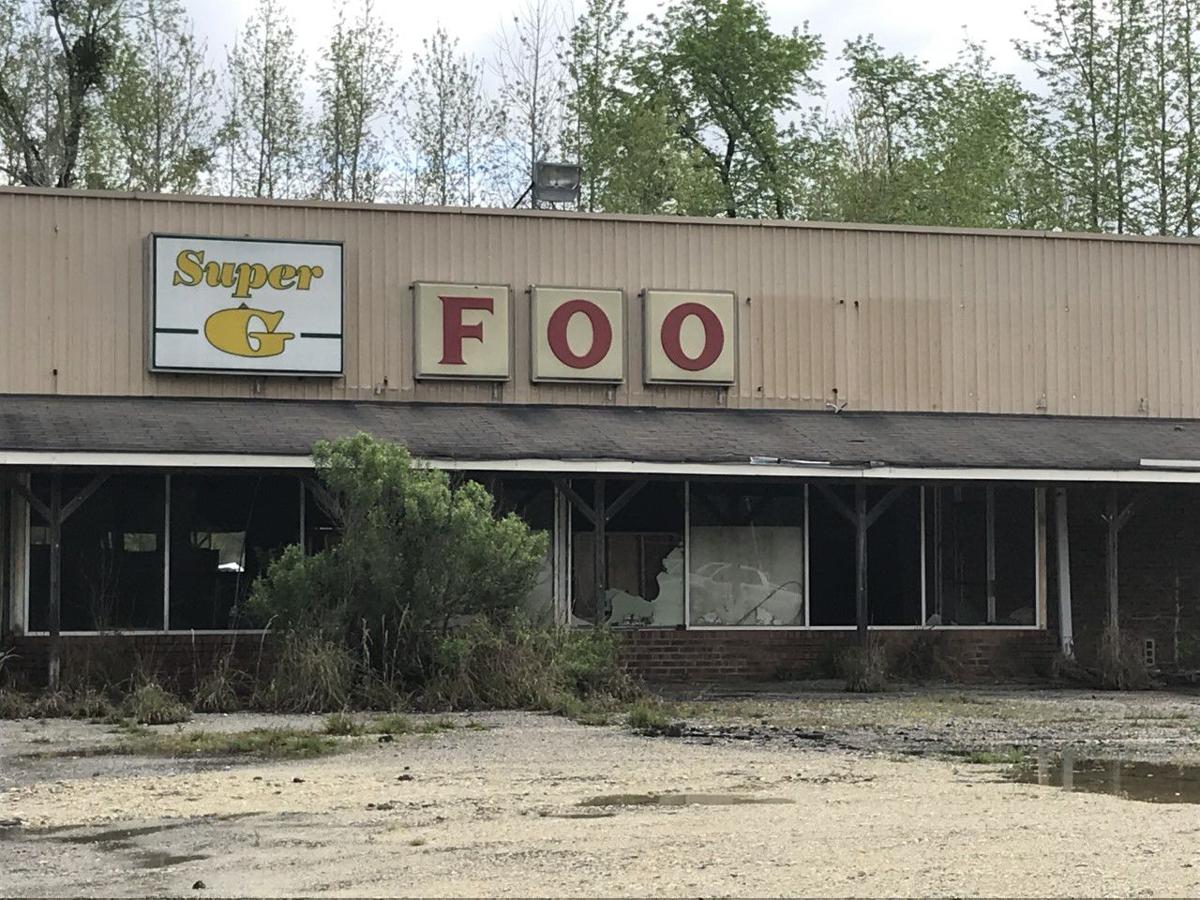 C.E. Murray High School football coach Brian Smith waits for a student to come out to get meals on Wednesday, March 25, 2020. Lauren Petracca/Staff

Jordan Burgess and Tonee Reid, students in Williamsburg County, get meals delivered by Evelina Jones, a kindergarten assistant, while schools are closed due to the coronavirus. Lauren Petracca/Staff

GREELEYVILLE — Bert Wilson has been driving this bus route for 24 years, down to Cue Ball and Lane and Snow Hill, past Bloody Bucket Road and through Trio. She knows where the kids live.

On Wednesday morning, she pulled her yellow Williamsburg County School District bus up to a non-descript gravel road and pointed to a trailer set in the woods behind a house.

"There's a student who lives back there," Wilson said. "I don't know if he is going to come out."

With the help of teaching assistants Evelina Jones and Virginia McBride, Smith grabs three plastic bags from a giant cooler and loads each up with two cartons of milk. Then he sets off down the gravel road to deliver the school breakfast and lunch, including cereal, biscuits, sandwiches, apple juice and chips.

Meal delivery is not part of Smith's coaching contract at C.E. Murray, a small school of about 310 students located in Greeleyville, just north of St. Stephen across the Berkeley County line in Williamsburg County. But he's been riding the three-hour bus route with Bert since South Carolina schools were shut down on March 15, to help make sure the kids are fed.

"It's extremely important," Smith said of the meal deliveries, which help feed students at C.E. Murray middle and high schools and Greeleyville Elementary while state schools are closed during the coronavirus pandemic through at least April 30.

"These meals are essential for their survival," he said. "Right now, their parents or grandparents might not be able to work, and any money they make probably has to go to pay the bills. So these meals we are providing are essential."

It's that willingness to go above and beyond that has made Smith, now in his second stint at C.E. Murray, a beloved figure in Greeleyville, population 387, and the surrounding area.

A 2001 Citadel graduate who played linebacker for the Bulldogs, Smith coached at C.E. Murray from 2014-17, then did one-year stints at Blythewood High in Columbia and at Scott's Branch High in Summerton before returning last year to C.E. Murray. He led the War Eagles to the Class A state title game in 2015, the same year devastating floods ravaged Wiliamsburg County. And C.E. Murray has won four of the last five region titles.

"We worked hard to get Coach Smith back," said C.E. Murray principal Dr. Gwendolyn Harris. "The community had embraced him before he left the first time. They didn't want him to go, and now they've embraced him again. He's good for the kids. He loves them and he looks out for them."

Williamsburg County is one of the poorest counties in the state, with a median income of about $31,000 and a poverty rate of about 28 percent. Just about all of the students at C.E. Murray are eligible for free lunch and breakfast, and the state Dept. of Education took over management of the Williamsburg County School District in 2018.

Lately there has been talk of combining the county's three high schools — C.E. Murray, Hemingway and Kingstree — into one school.

Smith said many of the students' parents work in the Myrtle Beach area, taking the "Beach Bus" each day to work in Grand Strand hotels and restaurants. That work is drying up as the effects of the coronavirus are felt, he said.

Greeleyville's grocery store, Super G Foods, has long been abandoned, and residents have to drive to Kingstree, St. Stephen, Georgetown or even Charleston to shop for fresh food.

"There are some country stores still open, but not many of them, either," he said. "And with what's going on now, it's hard for them to restock."

That makes those school meals even more important. Hughes estimates the school's cafeteria staff is producing and delivering about 800 meals per day for students at three schools during the coronavirus shutdown.

"If we didn't do it, they might be forced to make some tough decisions," Smith said.

Smith also teaches business education, including web design and desktop publishing. Because a lot of C.E. Murray students don't have internet access at home, he and other teachers have to make up "paper and pencil" packets for their students to work on at home. Smith delivers and picks up his students' packets when he drops off their meals.

It's ironic that a kid from the "concrete jungle" of Lynn, Massachusetts, (population 94,000) — known as the "City of Sin" due to its reputation for crime and vice — would find his home in the rural setting of Greeleyville, noted for rich hunting grounds and its annual "Flag Day" festival in May.

Smith met and married a girl from Greeleyville, Lucy Gamble, whose family has owned the Wilder Brothers Williamsburg House furniture store, right across the street from C.E. Murray, since 1938. Lucy teaches at Greeleyville Elementary, where the Smiths' son attends school.

"Lynn is a sanctuary city, so at my high school there were 40 languages spoken," Smith said. "And Lynn is known as a rough and tough town. But you learn to get along with everybody, and it's interesting to end up here in a rural county that's totally the opposite of what I grew up with."

Smith briefly played Arena Football after graduating from The Citadel, and was a graduate assistant with the Bulldogs before moving into high school coaching.

C.E. Murray had gone 5-25 in football in the three seasons before Smith took over in 2014, and by 2015 the War Eagle were 12-2 and playing in the state title game. That was the same season that dangerous floods swept the area, closing the school for two weeks and leaving many students stranded in their homes.

"These kids are very resilient and I see a lot of myself in them," said Smith, 42. "Where I grew up, sometimes kids were in a real tough environment, just like some of these kids. But they still push through and show love to everybody. Our kids are different than any I've coached, and I've coached a lot of different places.

"They accept everybody and they are very loving kids. But at the same time, they are tough. They go through some things that a normal person would think are unbearable, but they get through it. Sometimes it makes you tear up, and you want to give them everything you've got to get them out of some of the situations they are in."

C.E. Murray has produced some college players during Smith's tenure, including defensive back Darius Rush, an SEC academic honor roll defensive back at South Carolina. Current War Eagle Nyziah Alston Daniels, a 6-2, 235-pound fullback/linebacker, has an offer from The Citadel; his twin brother, Nyzier, plays on the offensive and defensive line.

"Coach Smith is a great person on and off the field," said Nyziah, a rising senior. "He's a father figure to all of his football players, and really goes the extra mile for all of us. He leads us in the right direction to go beyond life after football. He'll drive some of the players home after practice, and he really stays on top of us. He's always calling our teachers and parents and all that stuff. If you need something from coach, all you have to do is ask and he will do it."

Smith left C.E. Murray for Blythewood High, in a suburb of Columbia, in 2018. In retrospect, he said, that was a mistake.

"When I left, I left for the wrong reasons," he said. "I cried the day I left, and my kids cried, too. I'm happy I had the experience I had at Blythewood, but I knew I missed home. That's what it feels like here. Everyone here feels like family to me, and there's something special about the place that makes you want to be a part of it."