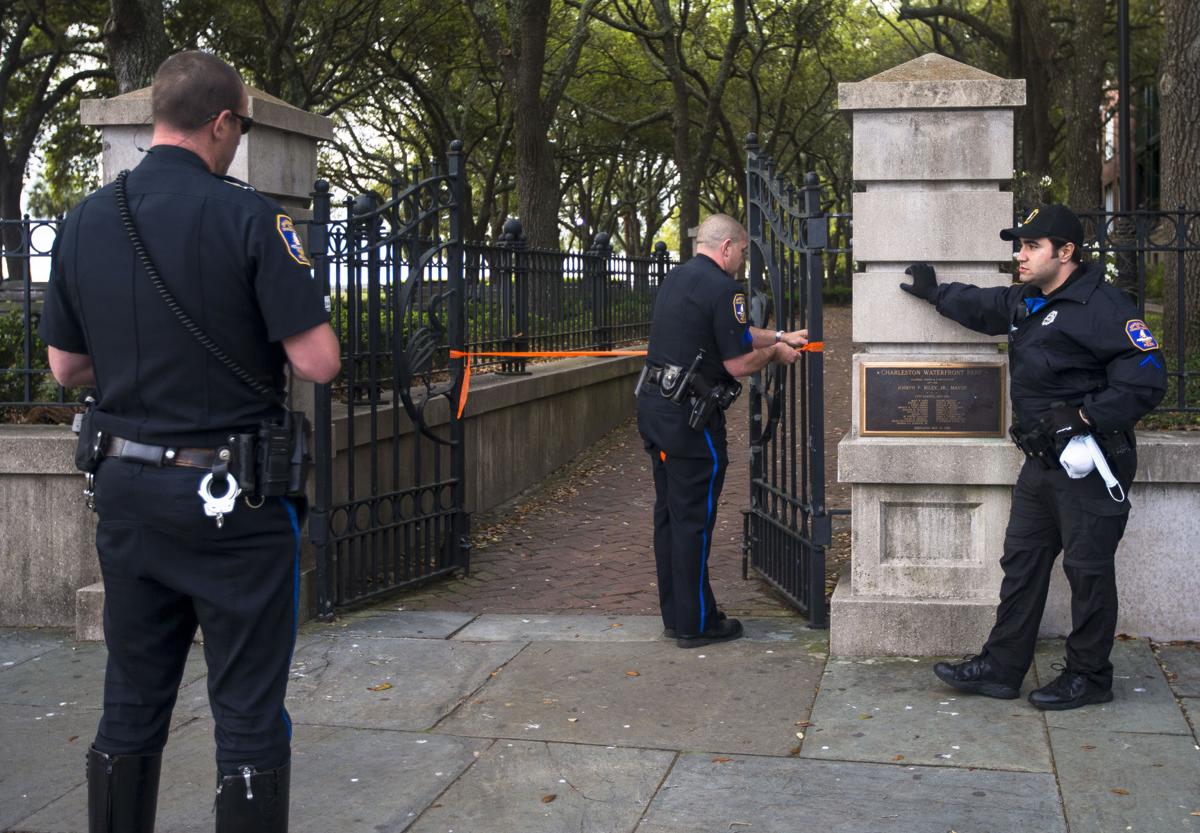 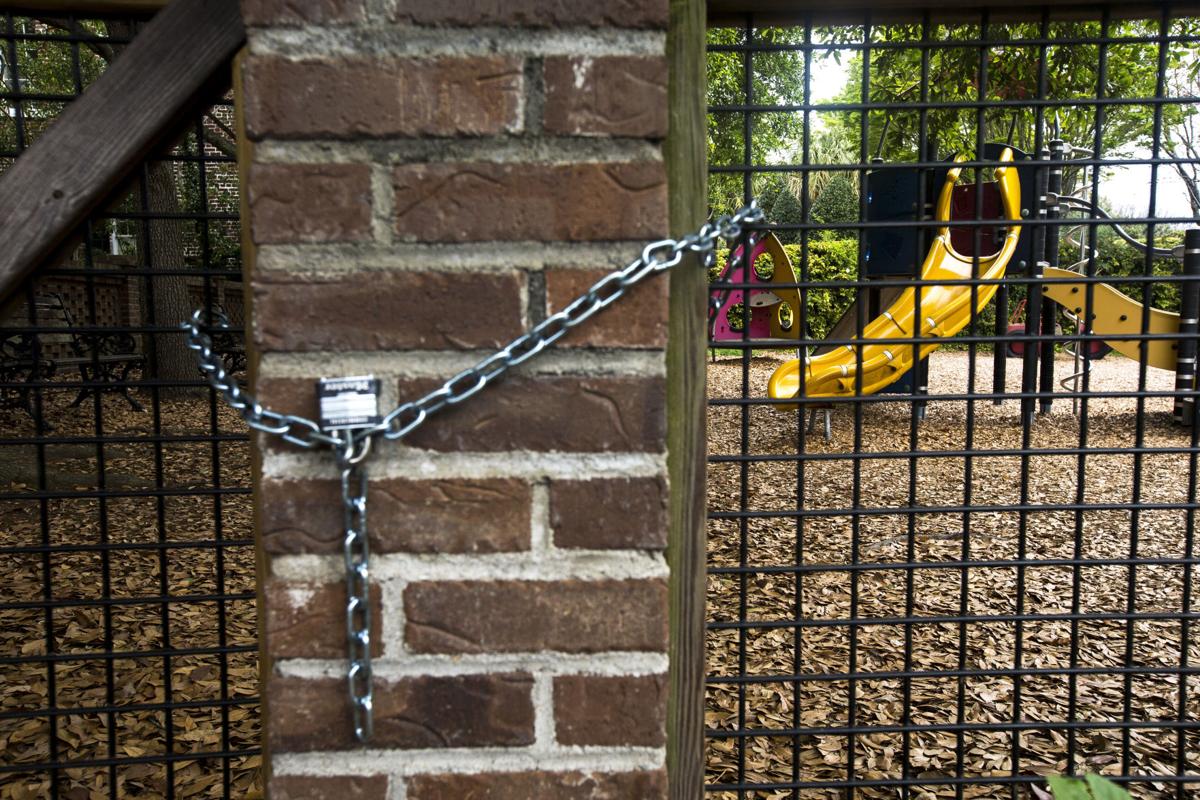 Hazel Parker playground is locked up on Thursday, March 26, 2020, in Charleston after the city passed an ordinance. Andrew J. Whitaker/ Staff 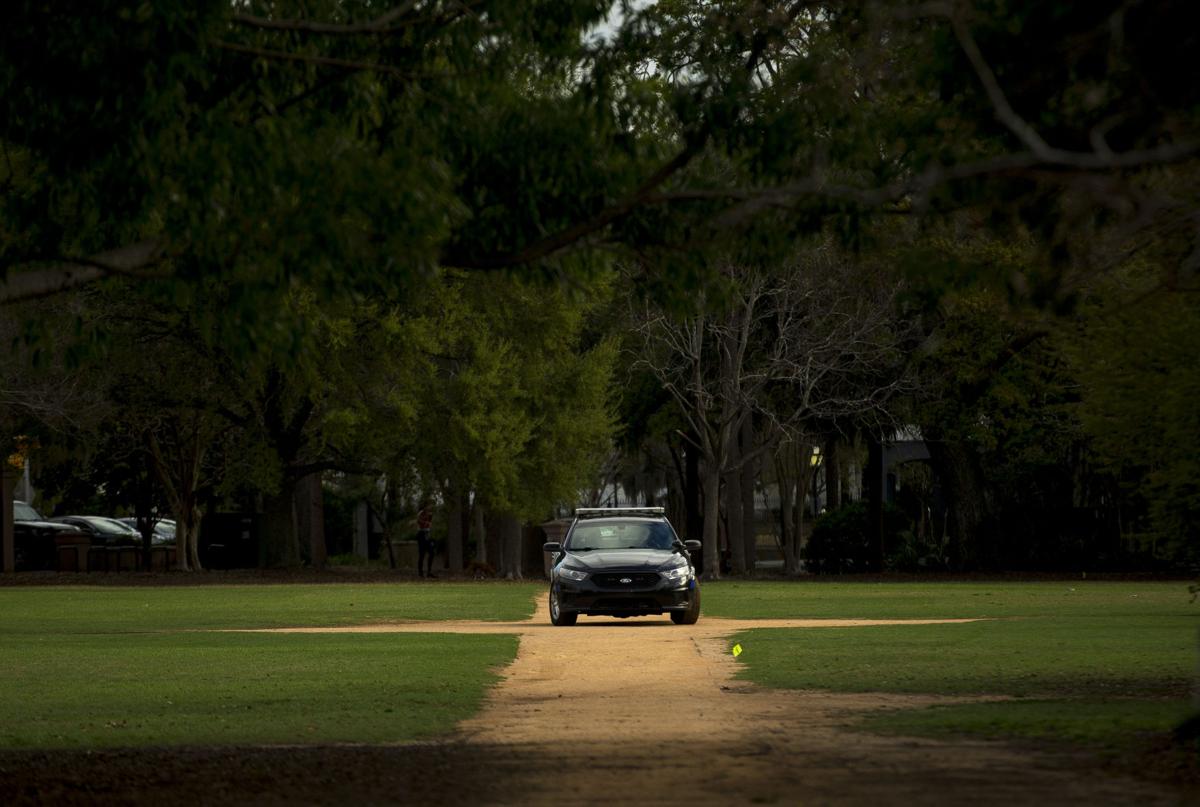 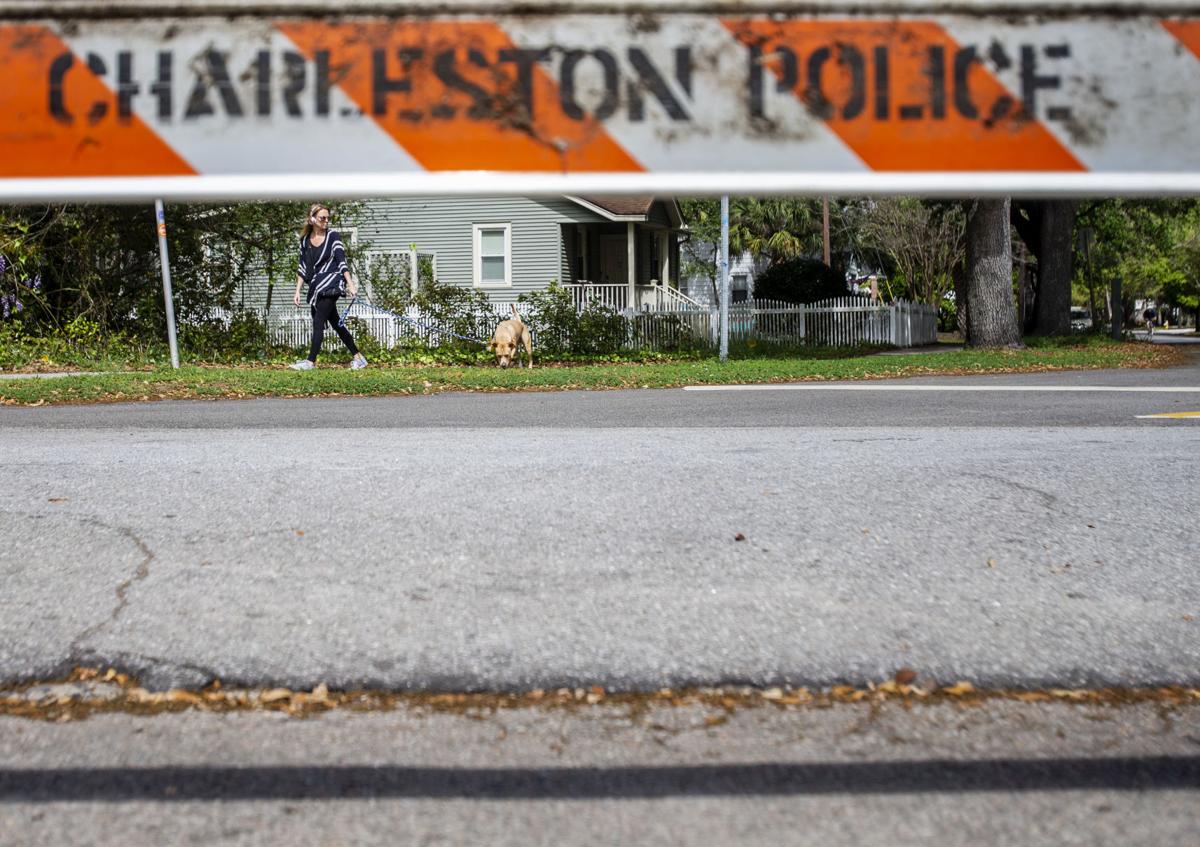 Charleston Police Department sets up a blockade to keep people from parking at Hampton Park on Thursday March 26, 2020, in Charleston. Gavin McIntyre/Staff 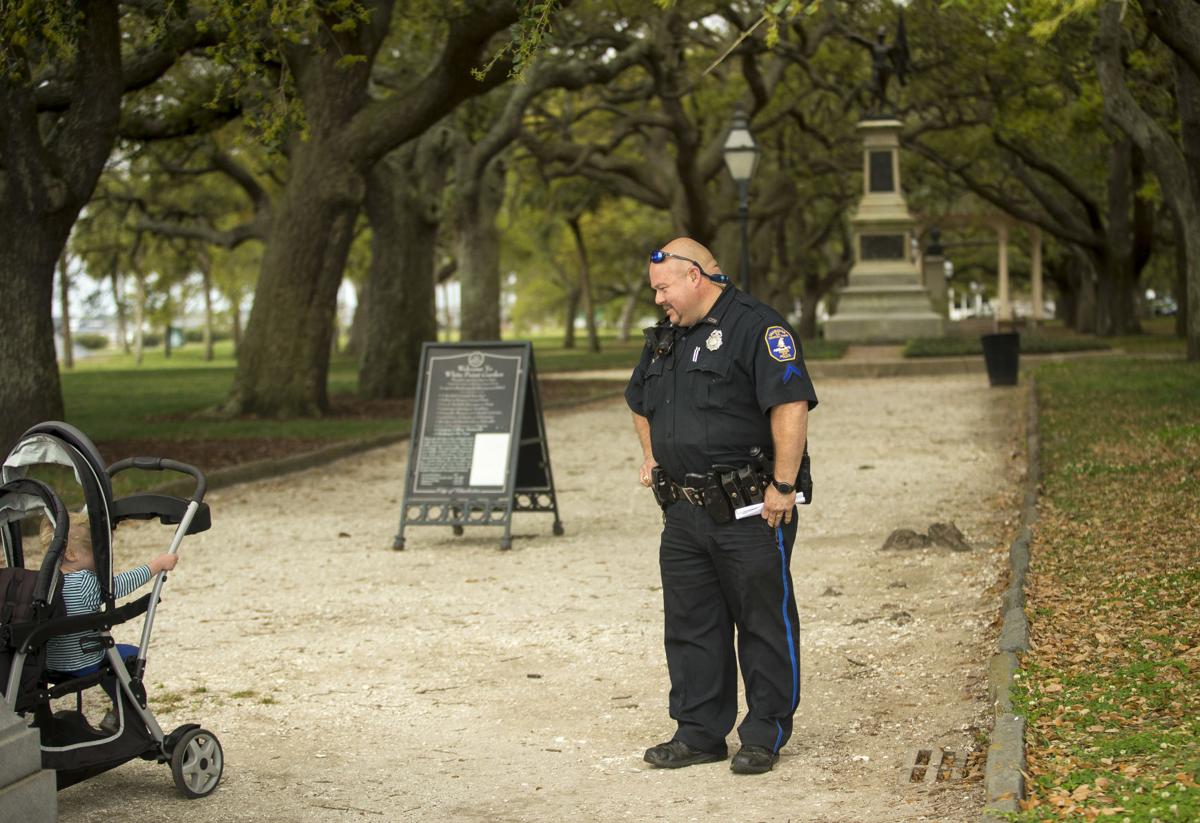 Officer Ryan Brown with the Charleston Police Department talks with a family as they walk by White Point Garden after a passed ordinance closing all the city parks on Thursday, March 26, 2020. Andrew J. Whitaker/ Staff

The first day of semi-home confinement in Charleston didn't look too different from the day before: joggers stomped the Battery sea wall, shoppers crammed grocery and hardware stores, and construction workers went about their business, circular saws buzzing.

Police had barricaded some public spaces by Thursday morning, among them Waterfront Park and Brittlebank Park, but hadn't blocked off others. There was no evidence of closure, other than a wandering police officer at White Point Garden. At other popular outdoor locales, walkers ignored barriers entirely, stepping right in.

The city's mandate to leave the house only for essential trips was the first such order in South Carolina, aimed at enforcing the social distancing public health experts say is needed to stop the spread of a novel strain of coronavirus. The city of Columbia followed with its own version, to be enacted Sunday.

The illness caused by the virus, COVID-19, has killed nine and sickened 447 known people so far in South Carolina.

Charleston Mayor John Tecklenburg has urged that staying home to kneecap the highly infectious, sometimes asymptomatic virus could save thousands of lives. But on a bright spring day with azaleas blooming, many people could not avoid the urge to go outside, and many shopfronts stayed lit.

The new stay-at-home decree requires the closing of all non-essential businesses, but the umbrella exempting those outlets allowed open is wide. Gift shops, clothing boutiques, nail salons and other outlets had shuttered, but the enterprises that kept humming included grocers, liquor stores, vape and CBD stores, ice cream shops, banks, utilities and restaurants with carryout service.

Construction workers continued to pound away at new hotels, apartment complexes and the International African American Museum rising along the Charleston peninsula's waterfront. The trucks of tradesmen, including plumbers, electricians, cabinet makers and carpenters, peppered the downtown area.

And in the coming days, even more commerce might be allowed to re-emerge as the city is taking applications from other entrepreneurs who argue their goods or services are "essential."

Figuring out the right approach to keeping people at home, said Police Chief Luther Reynolds, would start with education of the public and be honed in the coming days. Charleston was keeping a master list of businesses that were not complying with the order, opting first to warn, and had issued only one citation, on Sunday, to a restaurant that had broken an earlier rule against dine-in service.

"It's not martial law," Reynolds said. "We're not locking down."

By far the quietest section of the city were tourism hotspots on the lower peninsula. It had been a ghost town around the closed-down Dock Street Theatre, said Steve Curry, the maintenance director. He was happy for the company when he let a reporter inside to briefly chat. On the other side of Church Street, painter Douglas Ballentine was working on a depiction of St. Philip's Church and said he hadn't seen anyone out except for locals walking their dogs.

Marion Square, one of many parks with no evident barriers, was nonetheless deserted. A police car was parked on a dirt path inside. Across the street, a bellhop opened the doors for the rare entrant to the Francis Marion Hotel with a smile and a surgical-gloved helping hand.

Some were already stressed by seismic changes in the pace of life in the Lowcountry. Mandy Myers, of James Island, was attending her three children outside a downtown gelato shop near Waterfront Park as the family attempted to soak in some sunshine on a largely empty street. The Myers had walked up the Battery already, and getting outside was part of their daily routine, a pleasant way to break up suddenly mandated homeschooling.

"We work until we get frustrated, and then we go for a bike ride," Myers said of schooling her kindergartner, third-grader and fourth-grader.

Her husband, a dentist, had closed up shop and was staying home, too. The family was not, however, continuing trips to parks on James Island: that seemed too risky after recent restrictions on beach access had sent people in droves to places like Demetre Park.

The small, waterfront slice of land on the northern edge of James Island is a favorite for locals, and it was nominally closed, too, but many people walked around the barriers in place Thursday. Around 11 a.m., no police officers were present to enforce the closure.

Other spaces, like the West Ashley Greenway, remained active. The thoroughfare is a crucial transportation route for cyclists and walkers, and could be used safely as long as people remained apart, Charleston spokesman Jack O'Toole said.

Outside of a downtown area that had already seen a dip in tourists before the order, outer edges of the city were bustling. On Daniel Island, which is under Charleston's jurisdiction but part of Berkeley County, it was business as usual.

The leaders of unincorporated Berkeley County have taken a more hands-off approach. County Supervisor Johnny Cribb said he trusts Gov. Henry McMaster to make the best decisions for the state and didn’t see any reason to issue a mandatory order. The city representative for Daniel Island, Charleston Councilwoman Marie Delcioppo, was likewise in the minority that opposed the stay-home order in a Tuesday vote.

On Thursday, residents appeared to lean toward that more relaxed mentality. The Guggenheim Terrace park, located between Seven Farms and Island Park Drive, was filled with walkers, joggers and people-watchers. Several ate lunch on picnic benches.

Inside the Daniel Island Publix Supermarket, at least 30 customers waited shoulder to shoulder to order food from the deli. There were no clearly marked barriers or lines that labeled proper lengths for social distancing, usually recommended at six feet of separation.

Some, like Gregory Sager, weren’t too concerned about the coronavirus that has killed thousands worldwide.

“I ain’t worried about it,” said Sager, a North Charleston painter who was working on Daniel Island for the day.

He had been completing painting jobs all morning. He said he saw little difference between coronavirus and seasonal influenza, and he boasted that he rarely gets sick.

“I think it’s a little overblown. You’ve got to be cautious, but people are freaking out.”

In reality, the new coronavirus is 30 to 40 times more deadly than seasonal flu, according to the World Health Organization, and there is no available vaccine for it.

Those most flummoxed by the stay-at-home order were people who had no home. The state's homeless population has been stressed by the coronavirus pandemic, missing not only homes to sequester themselves in but also reliable places to wash their hands and dwindling options to find food.

"They're telling people they need to stay indoors, but they're not accounting for people on the street," said Jamey Williams.

Williams and Frank Jones leaned over a railing of Hampstead Square, on Charleston's East Side, around noon as they waited for lunch. Both men live on the street, retreating at night to locales where they feel safe but that they keep secret, lest a competitor sniff it out.

One80 Place, Charleston's largest shelter at 120 beds, is not accepting new clients for the time being, Chief Development Officer Marco Corona said. The shelter is almost full, unable to move clients to apartments because walk-throughs of new homes have been paused, waiting to make sure coronavirus symptoms don't show up in the current population.

SC's homeless population pressured by coronavirus. There are ways to help.

The shelter has also shut down its daily free lunch, in part because it would be too difficult to enforce distancing, Corona said. Williams and Jones on Thursday instead picked up sacks from Our Lady of Mercy Community Outreach, which is serving food to more than 100 people a day at two locations.

On the street, the two men have found several public health directives challenging. They didn't have computer access to complete virtual screening for a virus test if they feel sick, and no car to go to a drive-thru testing center if needed. Just finding a place to wash their hands required creativity.

Williams said he would duck into grocery stores' restrooms, and Jones said he'd found a spigot he could use discretely behind a restaurant in town.

The men were concerned about the sheltering order and in particular the prospect that they might be thrown in jail for a violation as enforcement ramps up. Williams spent much of his time in now-closed Marion Square, he said.

Those found to violate the ordinances could eventually be fined up to $500 or sentenced to 30 days in jail, but confinement might mean getting sick if another inmate comes in with the illness.

"What are they going to do?" Williams said. "Lock us up."