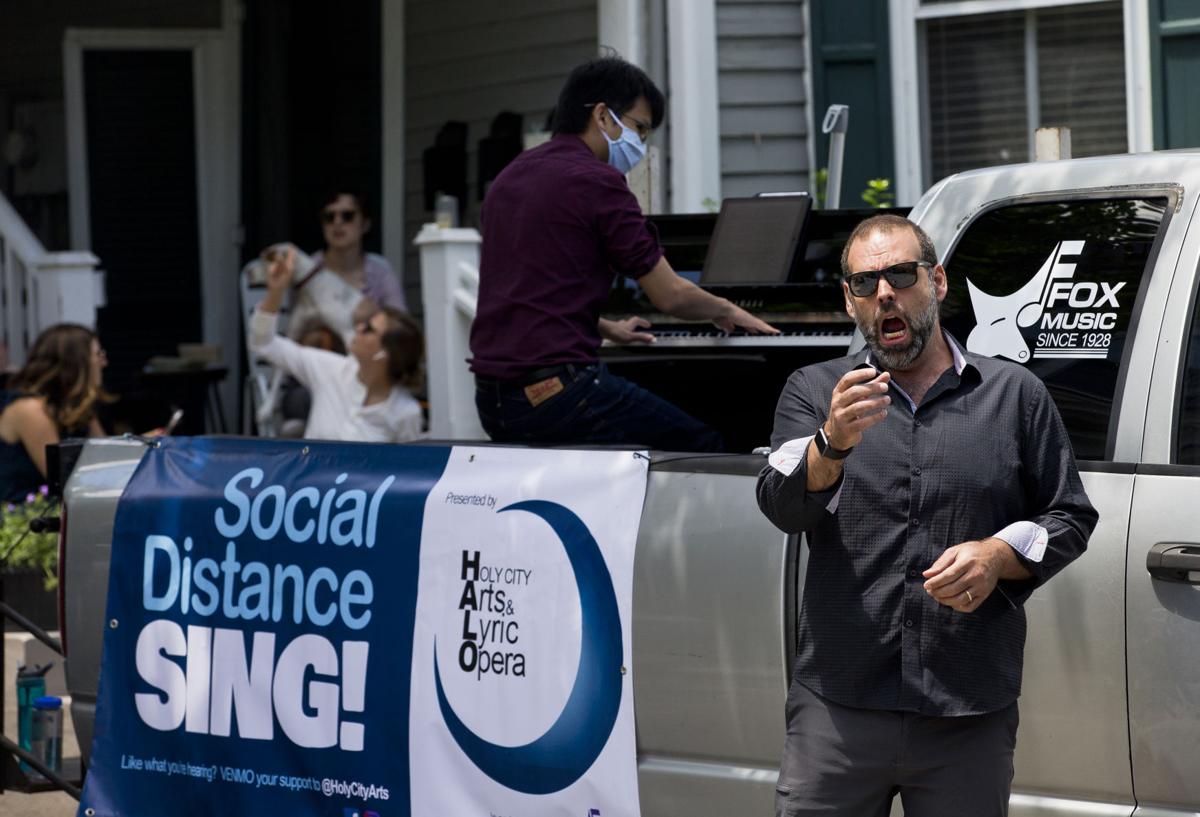 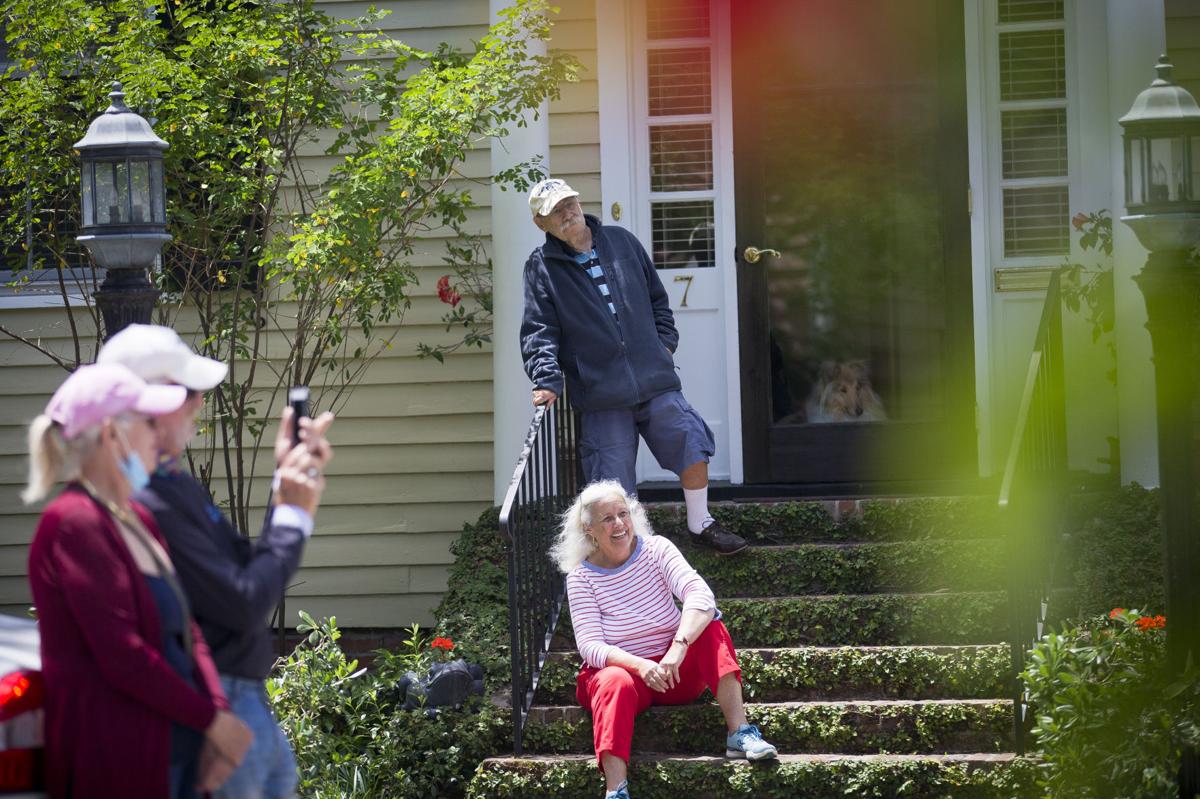 "I've been watching the live stream opera with the MET every day and I would never have expected this on my front porch on Gadsden Street" Mark Bloom said as he stands with Susan Lyons who have been living at their home for the last 16 years in Charleston. Andrew J. Whitaker/Staff 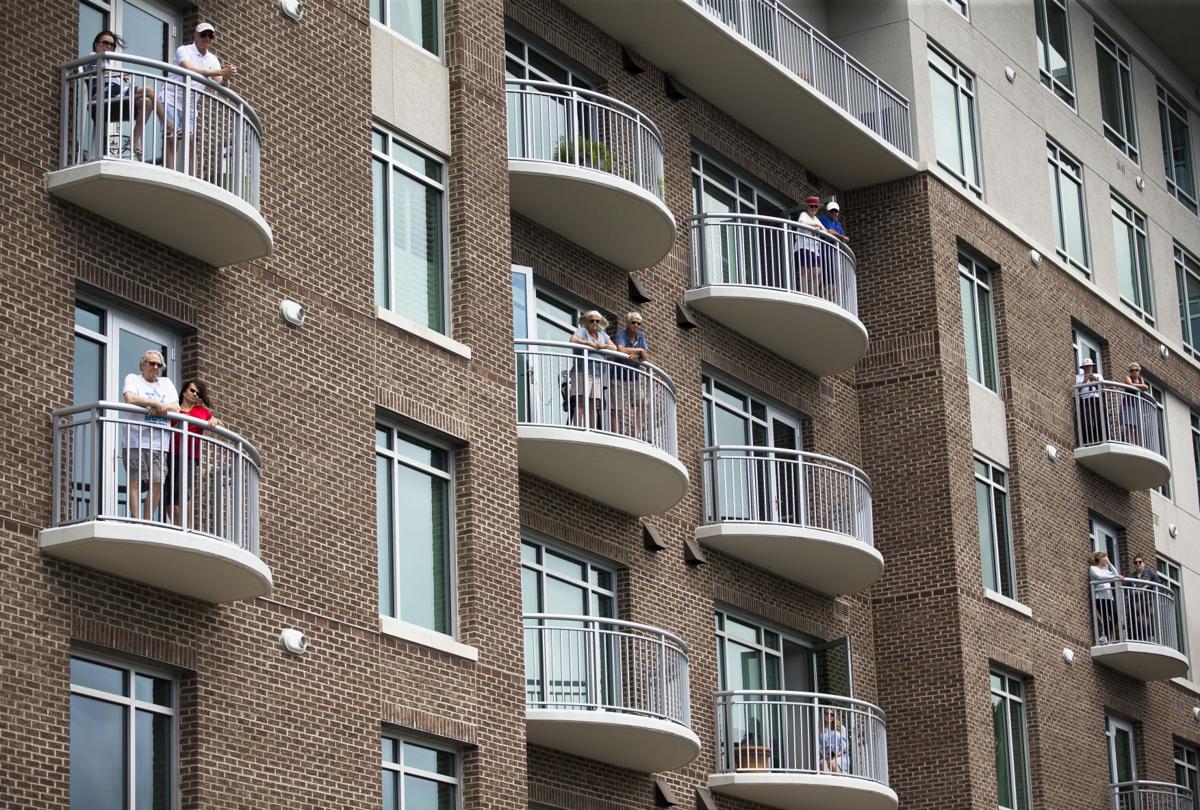 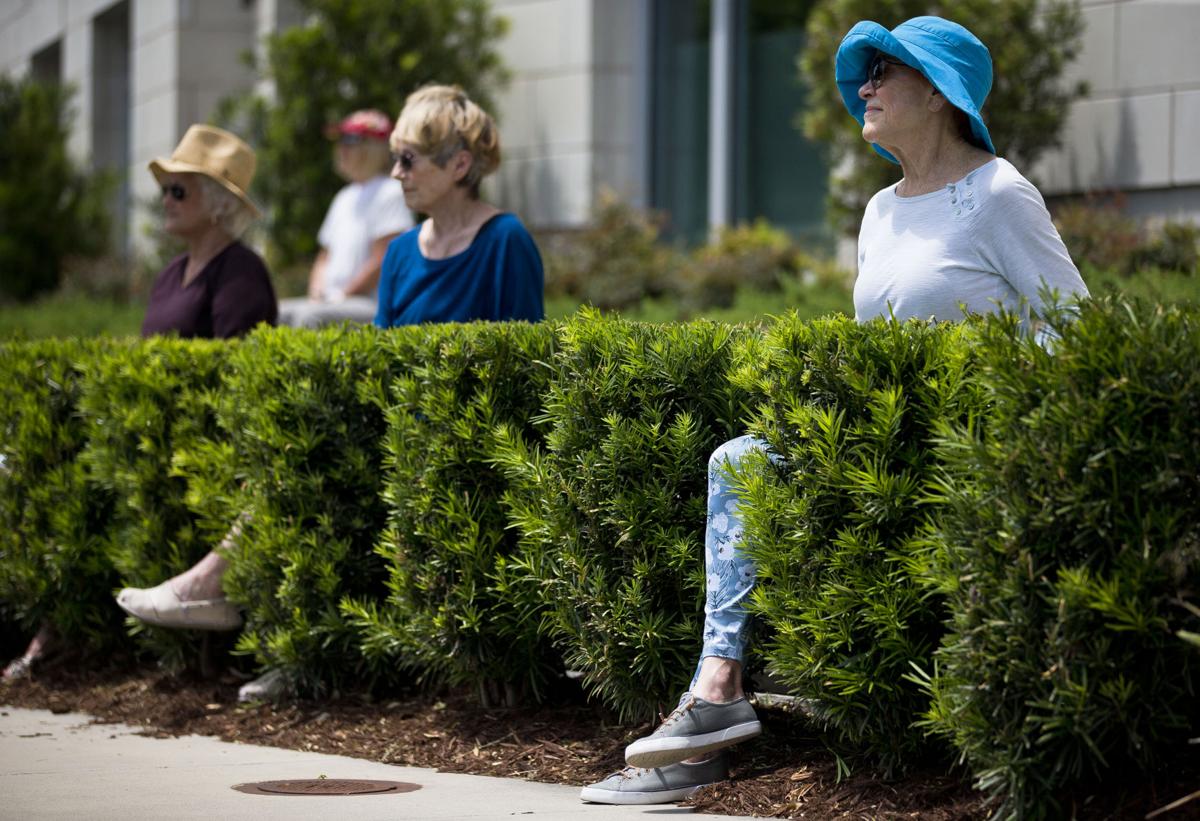 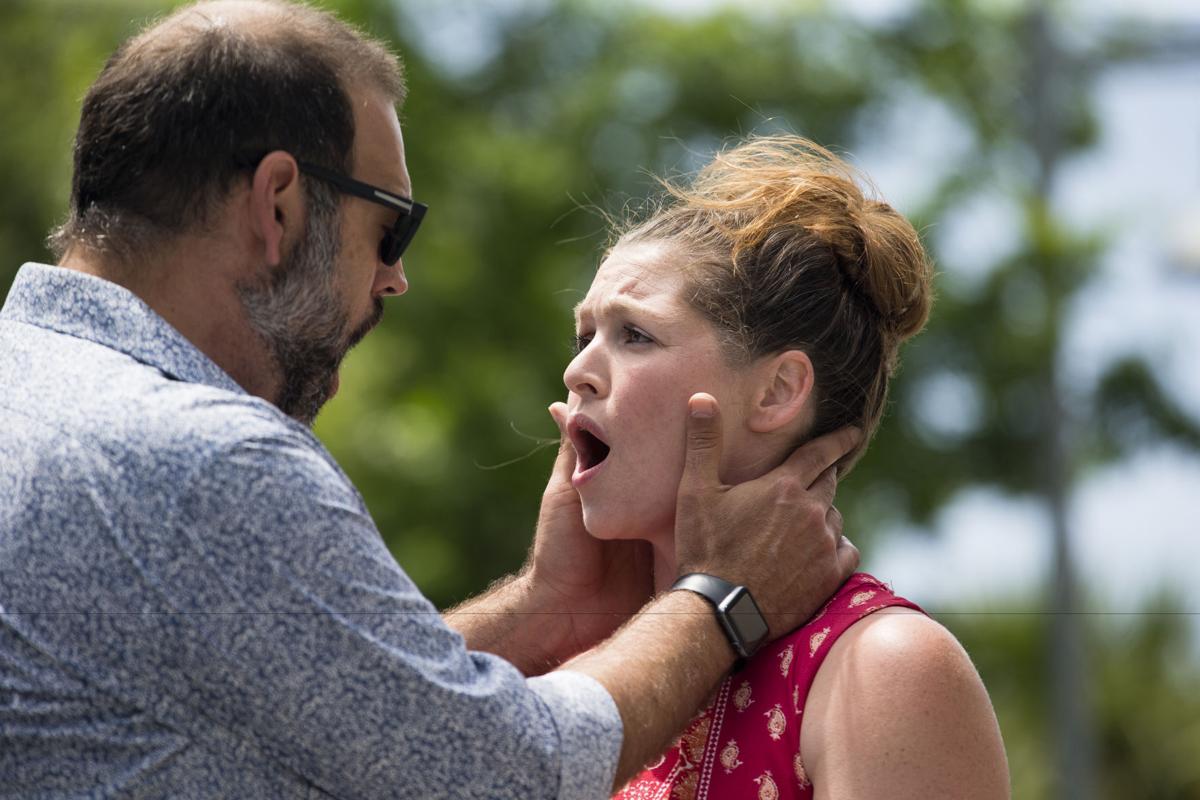 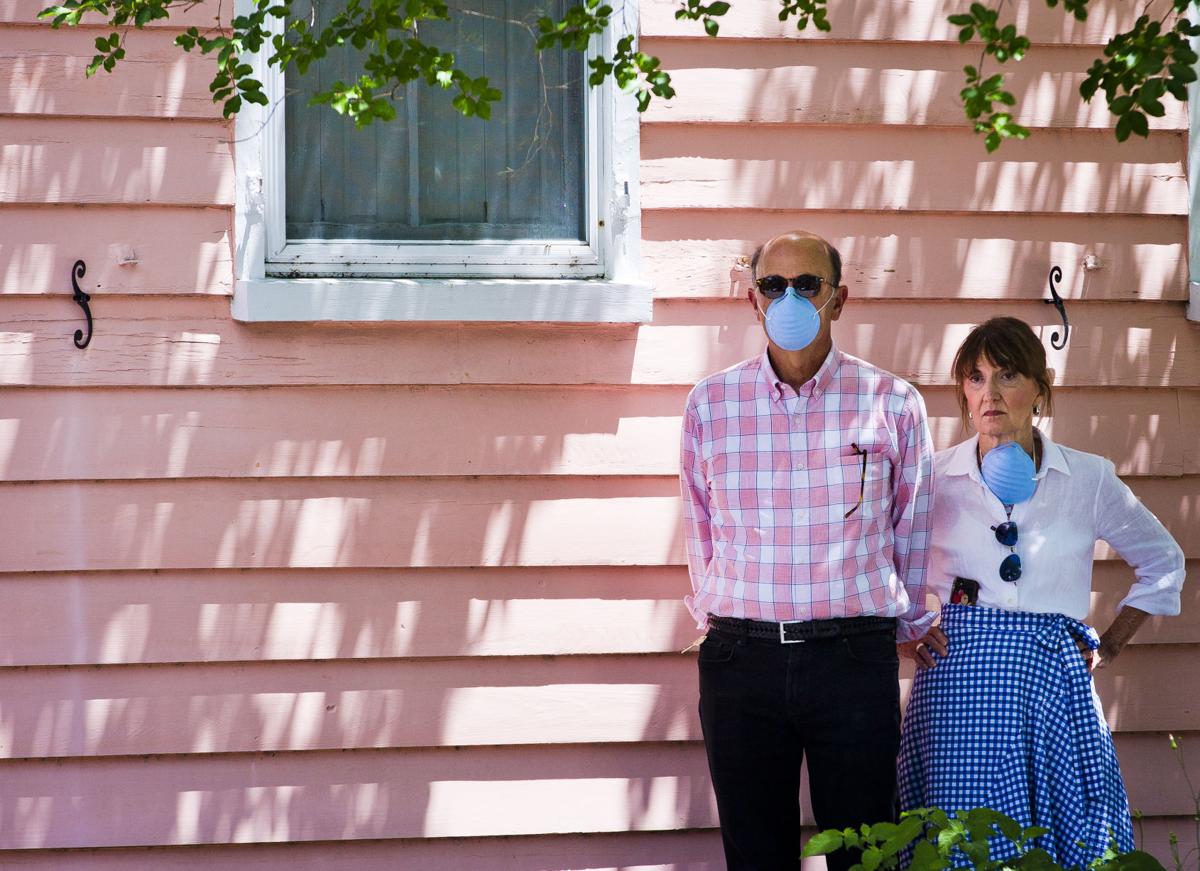 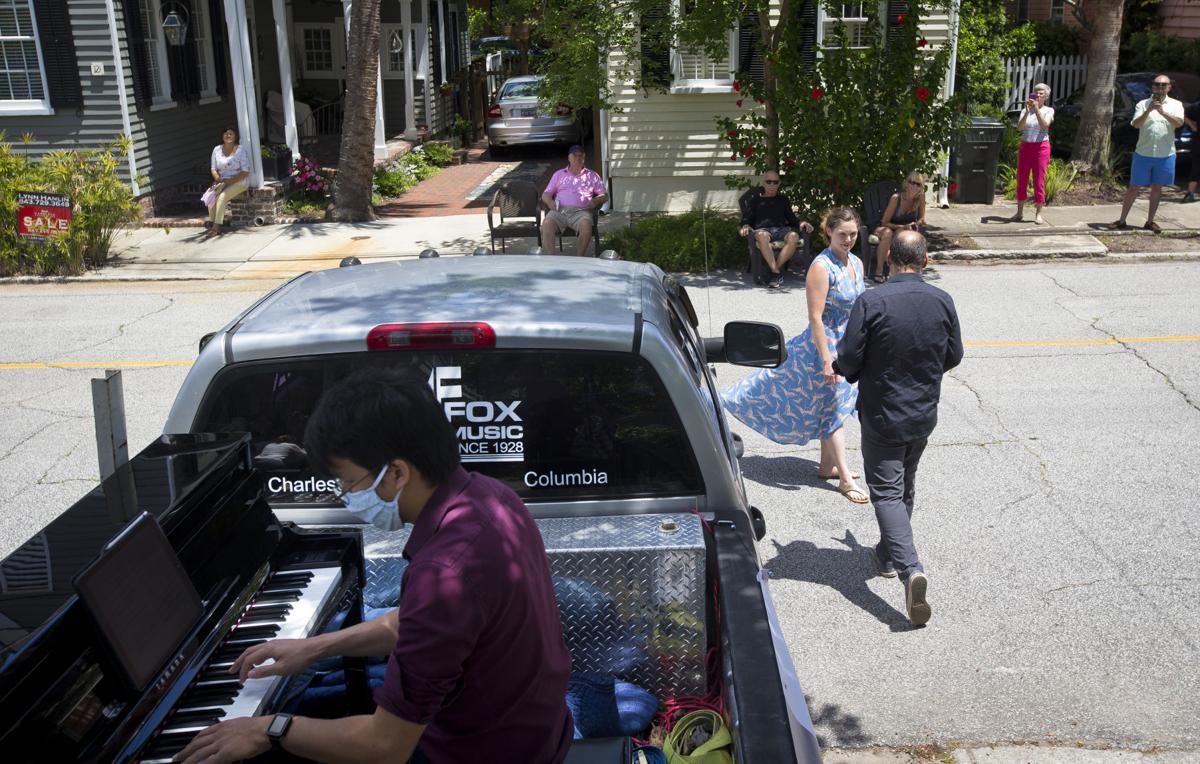 Chee-Hang See plays the piano with opera singers Dimitri Pittas and Leah Edwards during their Social Distance-SING! concert in a neighborhood off of Gadsden Street on Friday, May 1, 2020, in Charleston. Andrew J. Whitaker/Staff 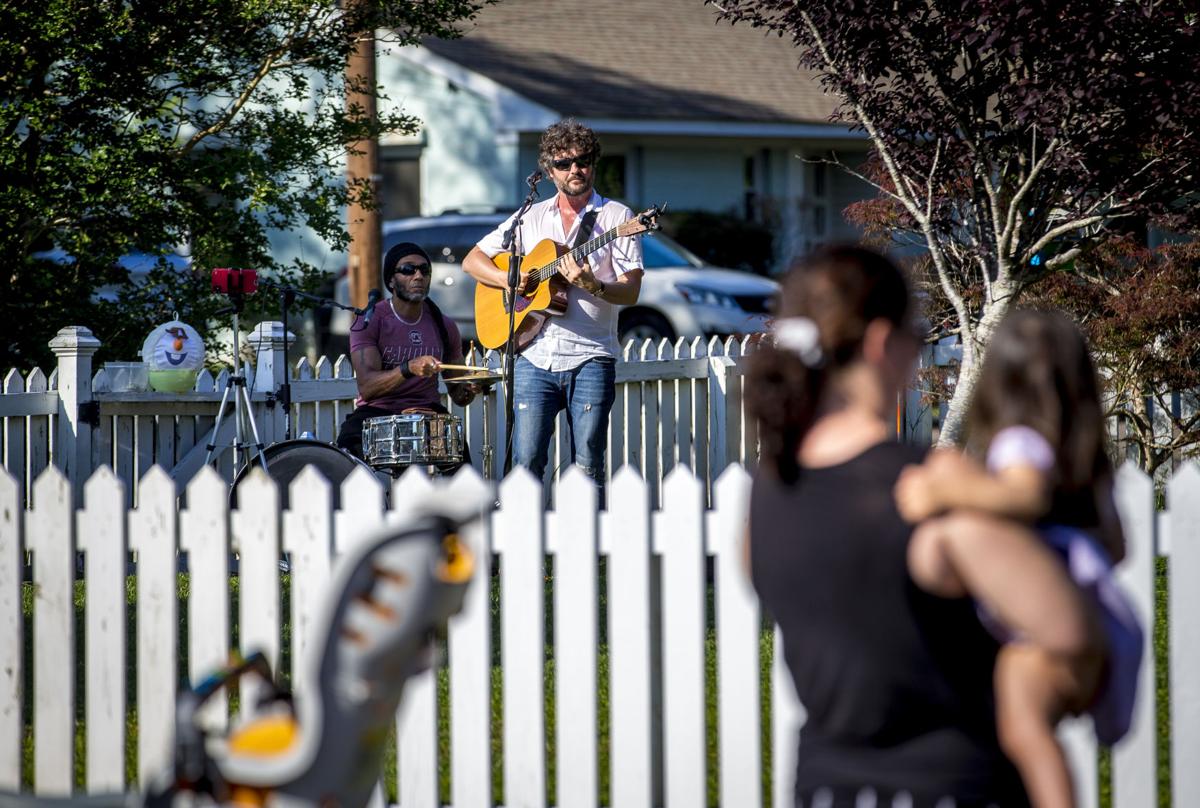 Chris Dodson and Jonathan "Mookie" Morant from Return of the MAC perform in a front yard on Saturday, April 25, 2020, in Charleston. Neighbors gathered on their lawns for the hour-long concert. Andrew J. Whitaker/Staff 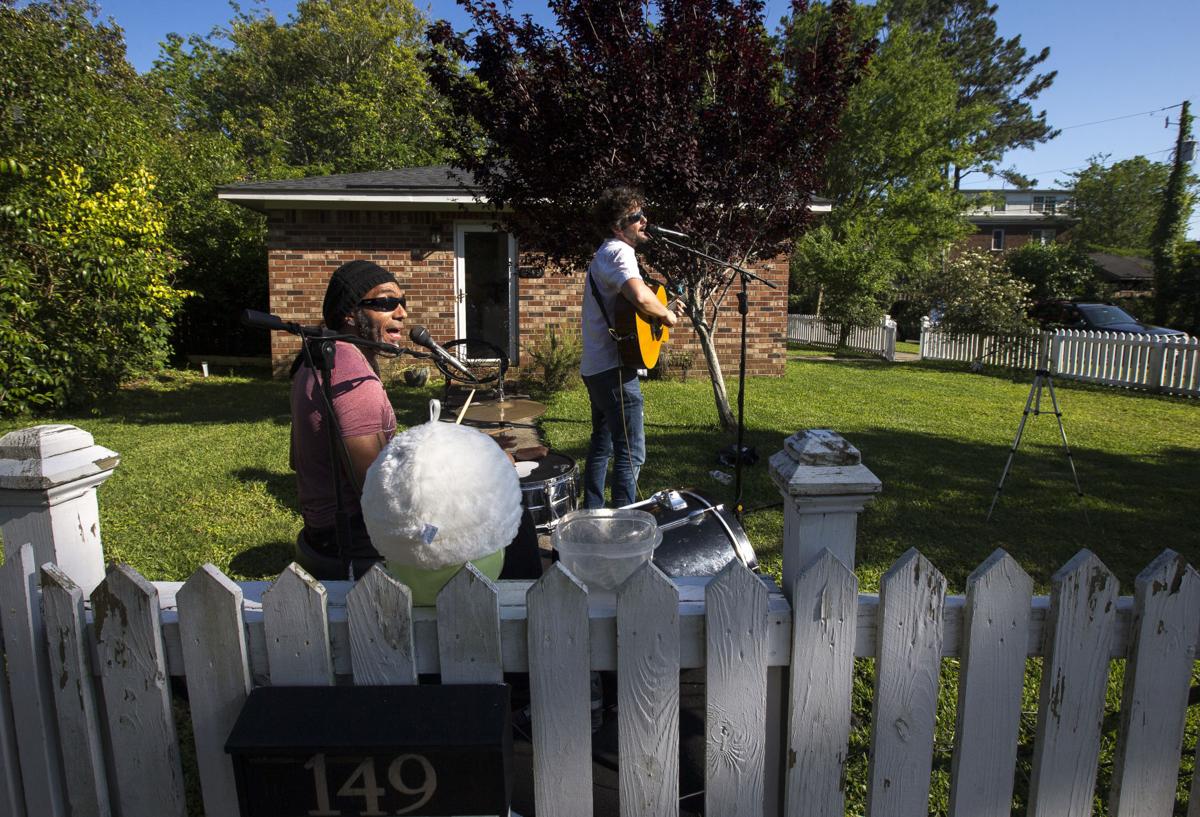 Chris Dodson and Jonathan 'Mookie' Morant from Return of the MAC perform in a front yard on Saturday, April 25, 2020, in Charleston. Neighbors gathered on their lawns for the hour-long concert. Andrew J. Whitaker/Staff

Chris Dodson and Jonathan 'Mookie' Morant from Return of the MAC perform in a front yard on Saturday, April 25, 2020, in Charleston. Neighbors gathered on their lawns for the hour-long concert. Andrew J. Whitaker/Staff

Gathered on rows of balconies, onlookers peered down, some with binoculars, at two powerhouse singers and a pianist below.

Instead of sporting tuxedos and gowns, as if they were seated in boxes at the Gaillard, audience members wore baseball caps and shorts, standing on upper-floor balconies at the Mount Pleasant Tides Condominiums. Instead of a stage, a flatbed truck, cradling an upright piano, sat in the asphalt lot.

Operatic duo Leah Edwards and Dimitri Pittas, founders of Holy City Arts & Lyric Opera who have enjoyed international careers, have been presenting "Social Distance SING!" concerts at a variety of outdoor locations around town since the coronavirus prevented them from performing on local indoor stages. Earlier in the day, they sang at The Grove for a handful of socially distanced gatherers.

Though it surely doesn't equate with a traditional stage, this is a creative answer to the havoc the coronavirus has wreaked on the entertainment scene.

"We have been challenged singing outdoors by a lot of things, from wind to construction trucks to kids playing on the playground, but it doesn't really matter because there's an energy that happens between a performer and audience, and it's been missing," Pittas shared.

That energy has returned at a variety of backyard rock shows, curbside concerts, neighborhood acoustic sets and even dockside saxophone solos during the pandemic.

Edwards and Pittas, along with piano player Chee-Hang See, began performing outdoor opera concerts in April. They went from one show a week to three in one day, spurred on by demand. The upright piano See plays was donated by North Charleston's Fox Music House for the occasion. A banner reading "Social Distance SING" was printed for owner Charlie Fox's pickup, which he provides for the traveling show.

At the Tides, balcony gazers observed a 20-minute performance that included "O soave fanciulla" from "La Boheme" and "Tonight" from "West Side Story." A few folks, most wearing masks, spread out across the sidewalk. All clapped loudly and cheered after each song, delighted to be at a "show" again.

Karen Plaehn had first seen the duo in her friend's neighborhood, Snee Farm, where she fell in love with the music and the idea. She helped organize the concert at The Tides.

"I had the most uplifting, positive day after that," Plaehn said of the Snee Farm performance. "I smiled the rest of the day because of how beautiful it was. It brought so much joy."

Guitarist and singer Chris Dodson and drummer Jonathan "Mookie" Morant from local wedding band Return of the MAC have been hosting Saturday happy-hour performances for the Wagener Terrace neighborhood from their friend Catherine Rubinstein's backyard.

Dodson lost expected income from bar and wedding gigs for some of March and all of April. He was going to file for unemployment, but then he got the idea to pick up his guitar for some livestreams, virtual guitar lessons and singing telegrams. They've all been a hit so far.

He also decided to host some backyard concerts with an opportunity for socially distanced attendees to tip online. On a Saturday afternoon in late April, neighbors gathered in small groups to hear him perform, some in golf carts, some on their bikes, others on the curb with dogs and kids.

Dodson and Morant played for an hour and a half to about 50 people, spread out across several blocks at the corner of the Wagener Terrace intersection. Playing to a live audience and hearing laughter and applause trumps the barrage of thumbs-up emojis and heart reactions on Facebook Live, Dodson said. The attendees get something out of it, too.

"Everybody’s been locked up inside, probably watching everything on Netflix," Dodson shared. "I think they want some social interaction, even if it is with social distancing — something human, something that’s not filmed, something they can see in the flesh and the feeling they get from that."

Guitarist and singer Eric Vaughn also has rediscovered that joyful bond between performer and audience with his neighborhood concerts on Friday afternoons. He sets up on his porch in Grand Oaks in West Ashley, and folks bring their fold-up chairs and beverages and spread out along the street and in their yards. Not only has Vaughn been energized by a live audience and virtual tips but also by the community support these concerts have revealed.

"I think performances like these are exactly what we need right now," he shared. "Music brings people together and makes them forget about financial concerns and everything associated with this pandemic. I really can't even explain how special it is at these concerts."

Local musical performers Derek Cribb and Hans Wenzel share the sentiment. They are organizing their own successful driveway and neighborhood "gigs," from North Charleston to West Ashley. Vaughn has even talked with his neighbors about continuing the shows once the pandemic is over.

With some bars and restaurants re-opening their outdoor patios and interiors for limited seating, musicians are slowly getting their gigs back. These small outdoor concerts are still on the agenda for now, though. And there's something about finding one and enjoying it during this trying time that makes it all the more rewarding.

As they say, you don't know what you got till it's gone. Cribb said he hopes that the impacts of the coronavirus ultimately will benefit live performances once they can come back in full force.

"I think it’s going to change music," he said. "There could be a new appreciation for it."