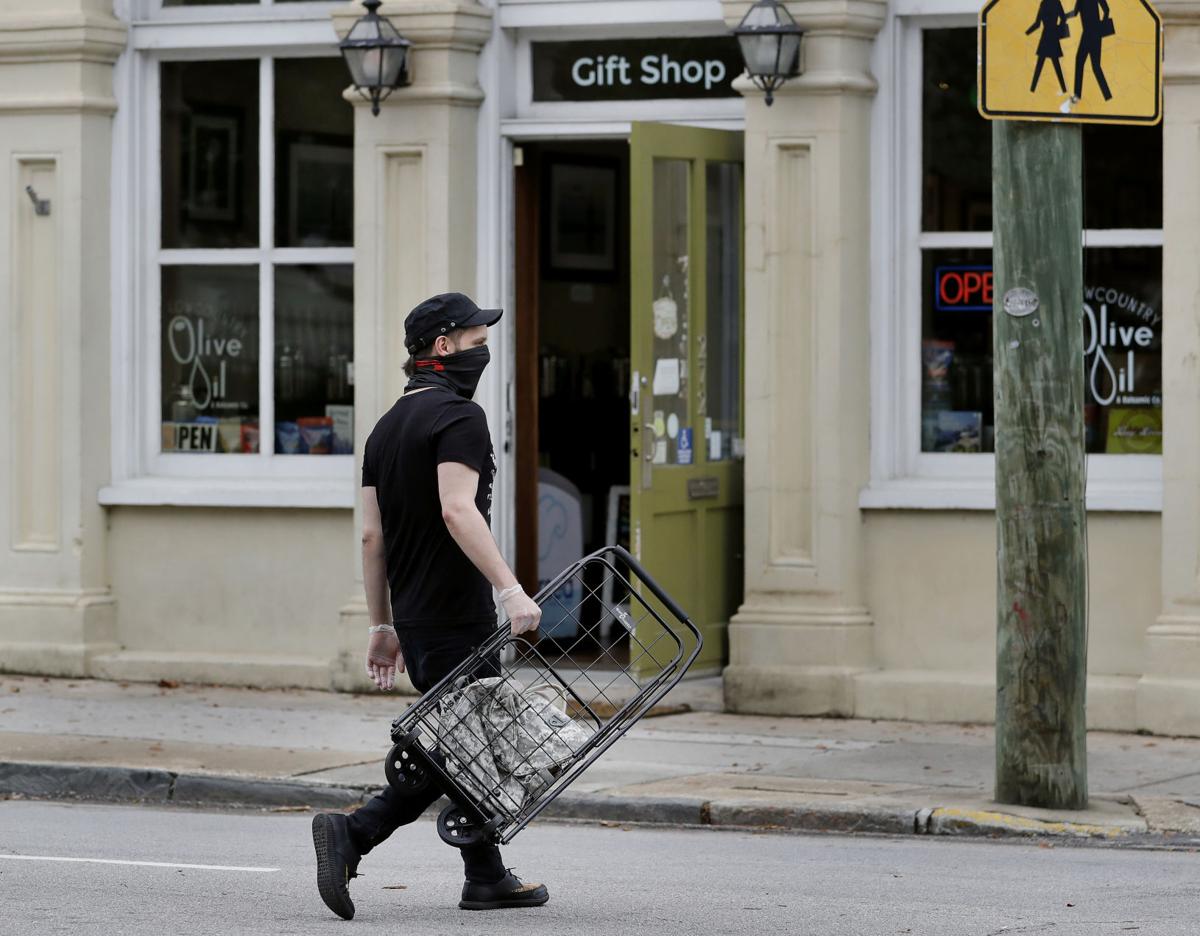 The Lowcountry Olive Oil company remains open on Meeting Street as Michael Wheeler, with his face and hands covered for safety, ventures out to the grocery store to buy food for a friend Tuesday, March 24, 2020, in Charleston. Charleston is the first city in South Carolina to enact a "stay at home" ordinance. Grace Beahm Alford/Staff 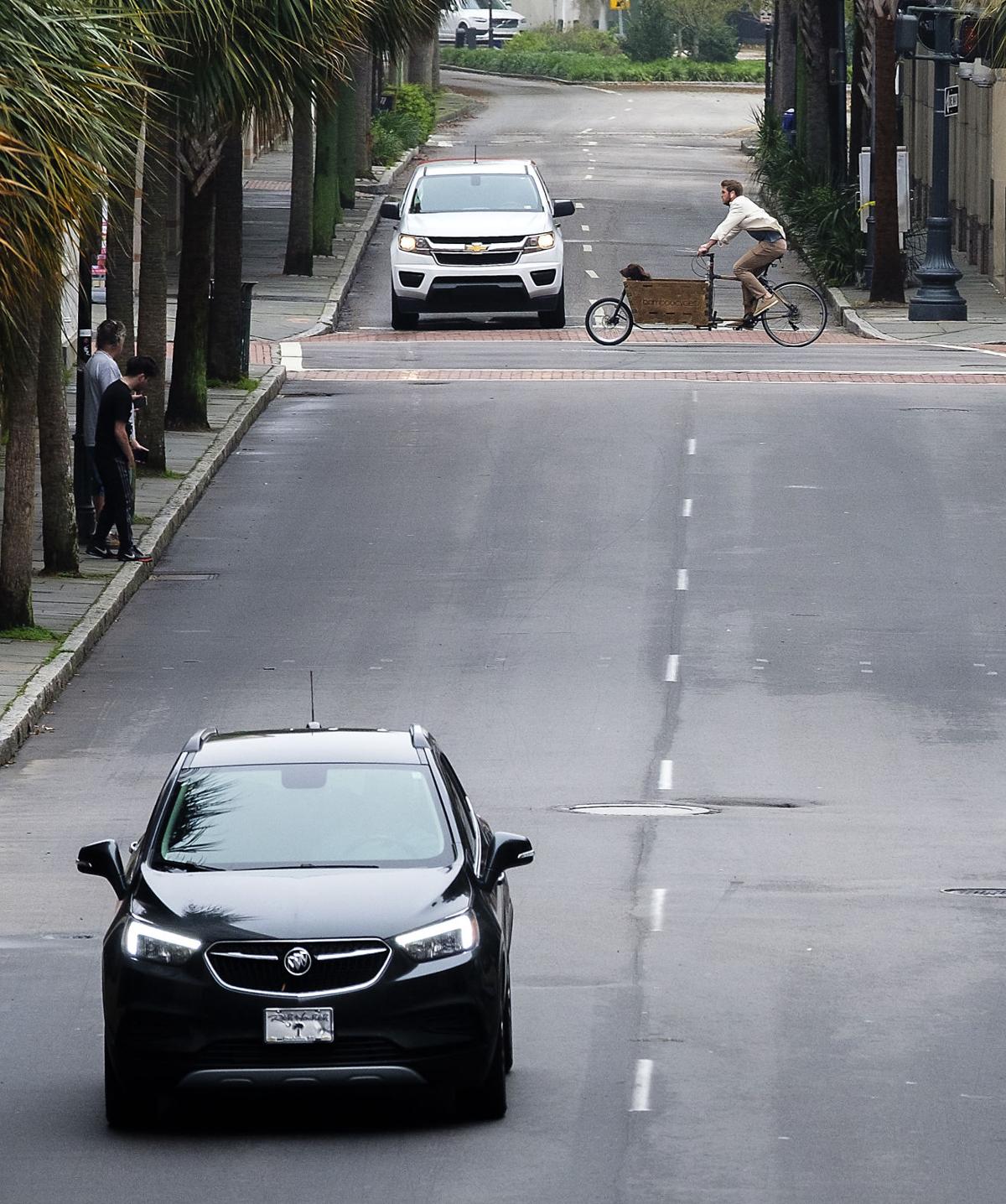 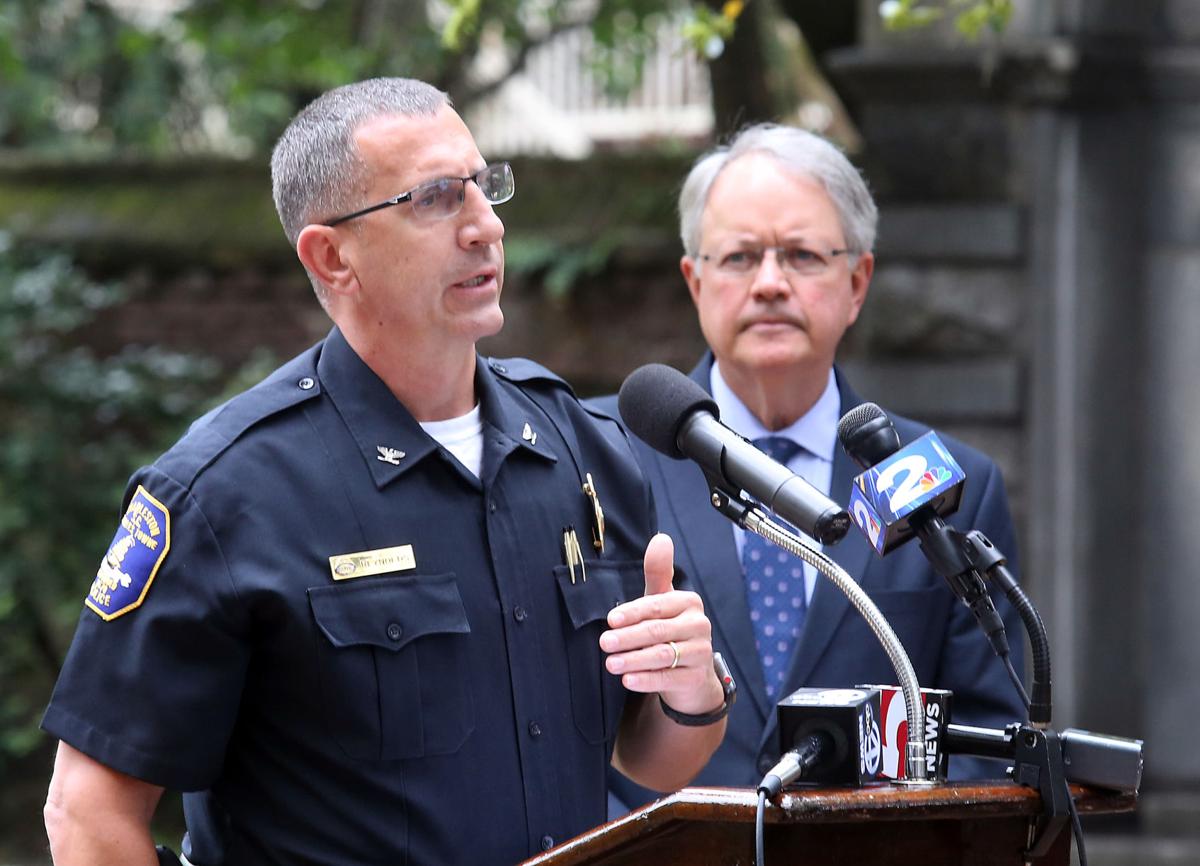 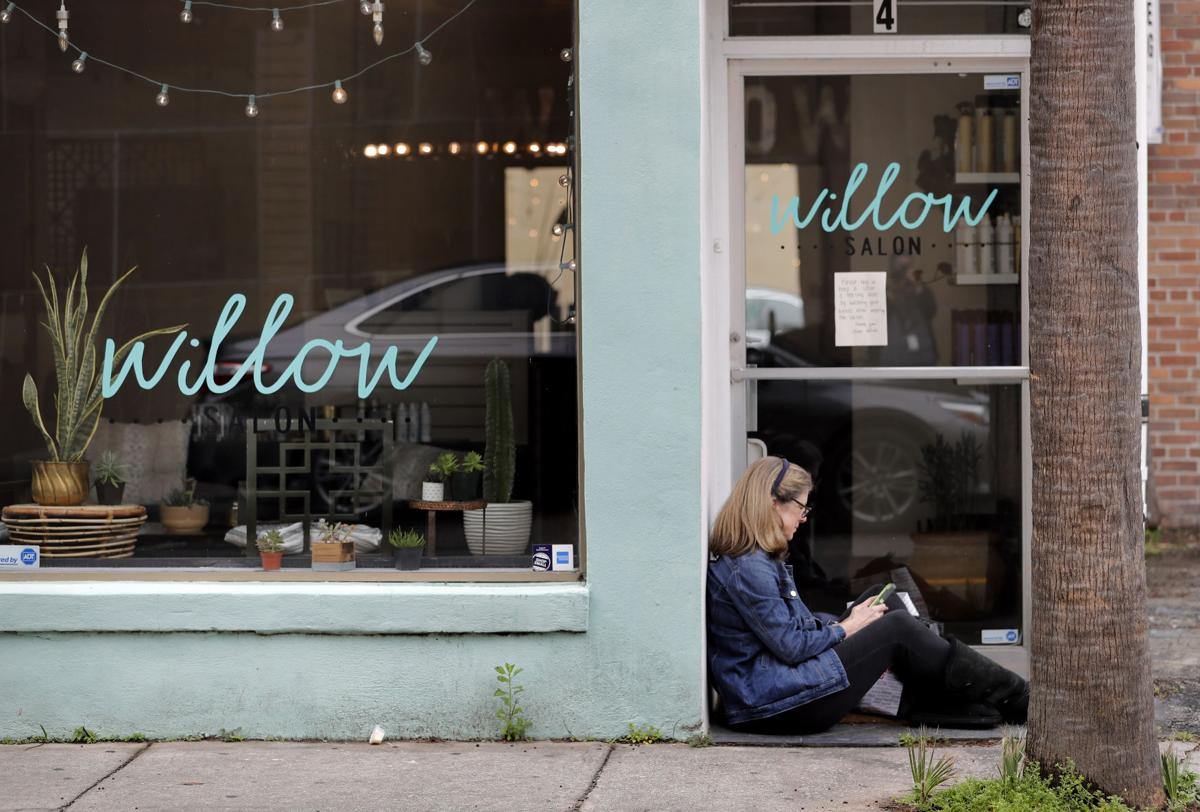 The Lowcountry Olive Oil company remains open on Meeting Street as Michael Wheeler, with his face and hands covered for safety, ventures out to the grocery store to buy food for a friend Tuesday, March 24, 2020, in Charleston. Charleston is the first city in South Carolina to enact a "stay at home" ordinance. Grace Beahm Alford/Staff

Charleston marks the first city in South Carolina to enact a "stay at home" ordinance, urging residents to only go out if it is to the grocery store, pharmacy, doctor's office or outside for exercise as state leaders anticipate an exponential increase in coronavirus cases.

The new restrictions ban gathering and congregating, but allows people to go outside to walk their dogs or get exercise. The ordinance goes into effect on Thursday morning and will stay in place for two weeks.

Though the measure was approved, not all members of City Council were on board. Four members voted against it: Councilwoman Marie Delcioppo and Councilmen Keith Waring, Mike Seekings and Harry Griffin. Waring said he thought the ordinance should only be in place for one week. Seekings said the restrictions weren't strong enough.

Charleston Mayor John Tecklenburg, in an afternoon news conference outside City Hall, said "more dramatic action" must be taken "while there's still time to save thousands of lives" in the Charleston area.

"(The S.C. Department of Health and Environmental Control) has now officially told us that the coronavirus pandemic is in the acceleration phase in our state," Tecklenburg said. "This means that there is significant community spread and that we've entered the period of maximum danger for our citizens, with infection rates and deaths due to this disease set to rise exponentially."

Tecklenburg said city staff modeled the proposed list of essential businesses on recommendations from the U.S. Department of Homeland Security and called it a "very broad list."

Delcioppo said she’s heard from state and Berkeley County leaders and that there is a sense the city is “pulling the trigger” and “jumping ahead of the governor.”

Councilman Karl Brady, who voted in favor of the measure,  said he will have to tell his neighbor across the street — a hairdresser — that she’s not essential, and voted "with a heavy heart."

Councilman Jason Sakran said he felt the ordinance was a measured approach and makes Charleston a leader in the region.

“If we’re the only municipality doing this, that’s what leadership looks like,” Sakran said.

Councilwoman Carol Jackson said the city “needs to step up and make a decision that’s not popular with our constituents.”

Seekings said he voted against the ordinance because the list of essential businesses were broad and not strong enough.

Charleston County Chairman Elliot Summey said in a statement the county government "does not have any immediate plans to follow course in the unincorporated areas of the County" and will continue to follow state-led direction.

"It puts a lot of power on the street cop to decide who has a reason to be out and is justifiable," Dunn said.

Charleston’s stay at home order comes as a growing group of states have ordered their residents to stay out of public places except to get medical care, buy groceries or exercise. At least 17 states and dozens of municipalities have issued such orders.

Since Tuesday, the mayors of Atlanta and Savannah have moved to adopt such orders, as have the leaders of Charlotte and Birmingham, Ala.

South Carolina has not joined them. Gov. Henry McMaster said Monday he didn’t think a formal order would be needed if state residents complied voluntarily.

The governor asked police to break up gatherings of more than three people and he asked businesses to let their employees work from home. About half of state employees have gone remote, he said.

“We’re not ruling anything out,” McMaster said. “That is a drastic action and we all hope that will not be necessary. Many South Carolinians are taking precautions that will render that unnecessary.” 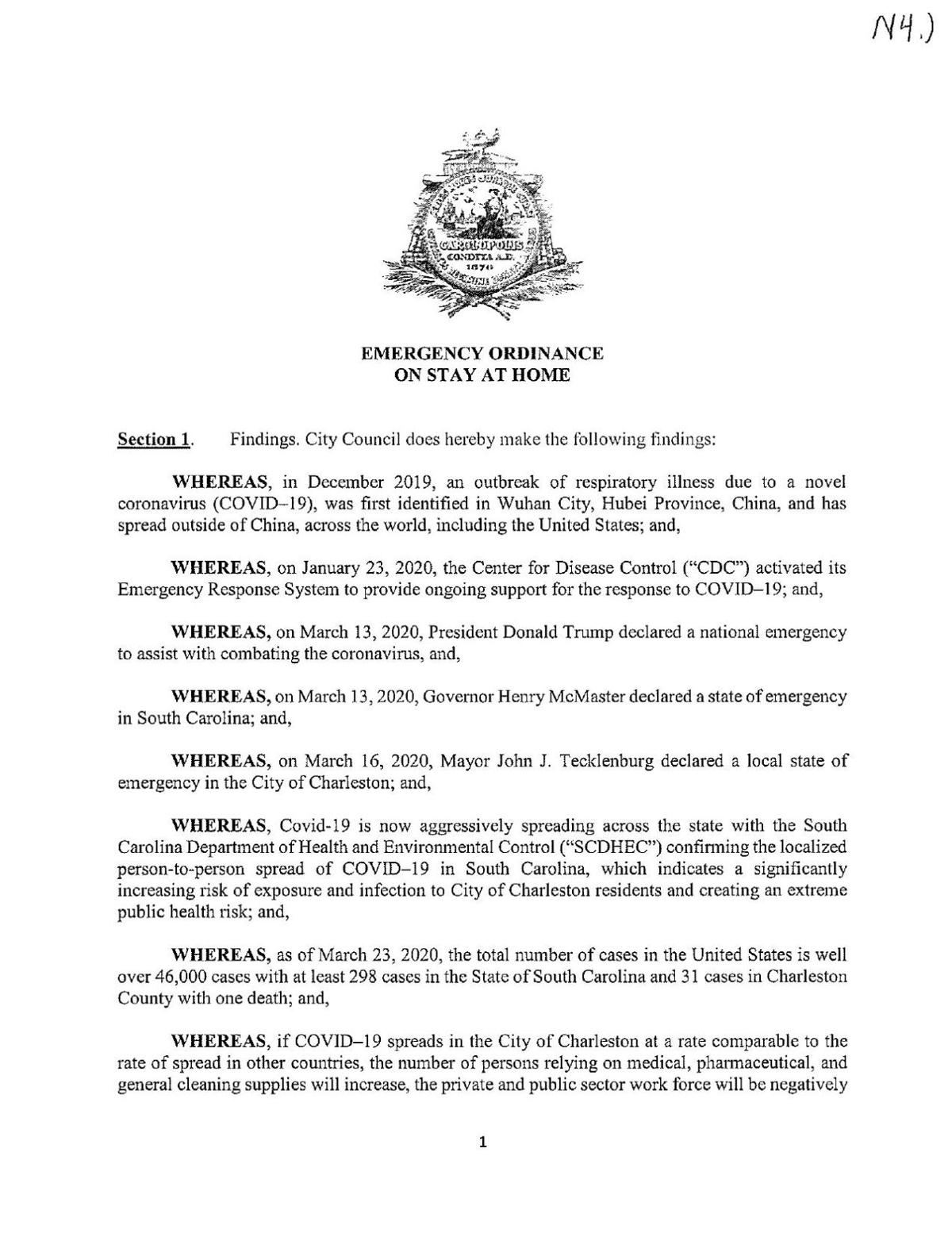 Brian Symmes, a spokesman for the governor, said Tuesday that Tecklenburg's plan "doesn’t sound dissimilar from what the governor's been encouraging for over a week now. If you have the ability to stay home, you should."

Other states’ leaders have issued more formal directives to ensure compliance. Of the 17 governors who have issued stay at home orders, seven announced them before their states had identified as many cases as South Carolina has today. Adjusted for population, 10 states had locked down their residents’ movement before the outbreak reached the levels seen here.

South Carolina has announced 6.6 cases for every 100,000 people. By comparison, the Republican governors of Indiana and Ohio ordered residents to stay home this week before they had 4 cases per 100,000.

As of Tuesday afternoon, there are 342 positive cases in 36 counties and seven deaths have been reported from coronavirus; 36 cases were reported in Charleston County.

As of Tuesday, all city parks also were being closed.

On Friday, The New York Times published models prepared by Columbia University researchers estimating the rate of infection nationally and at the county level based the degree of preventative measures taken.

Under the worst-case scenario, with no restrictions in place to reduce transmission, the virus would peak in Charleston County in early May with 91,000 people infected. Adopting some control measures could drive that figure down to 5,600 people. Adopting harsh controls could limit infection to 700 people but extend the peak until late July, the Times reported. In these instances, the numbers represent those infected with the coronavirus, not those who fall ill or perish.