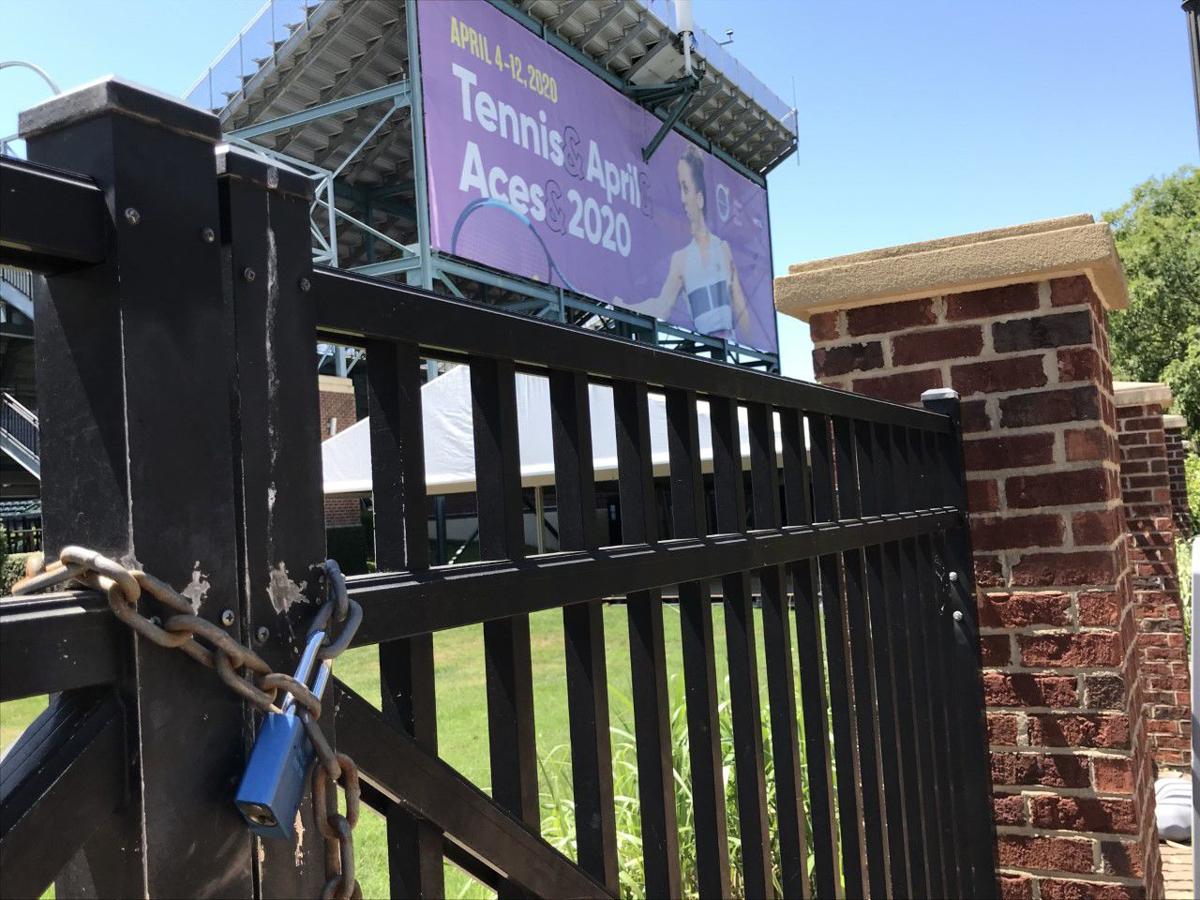 Gates were locked on what should have been semifinal Saturday at the Volvo Car Open, canceled due to the coronavirus. Jeff Hartsell/Staff 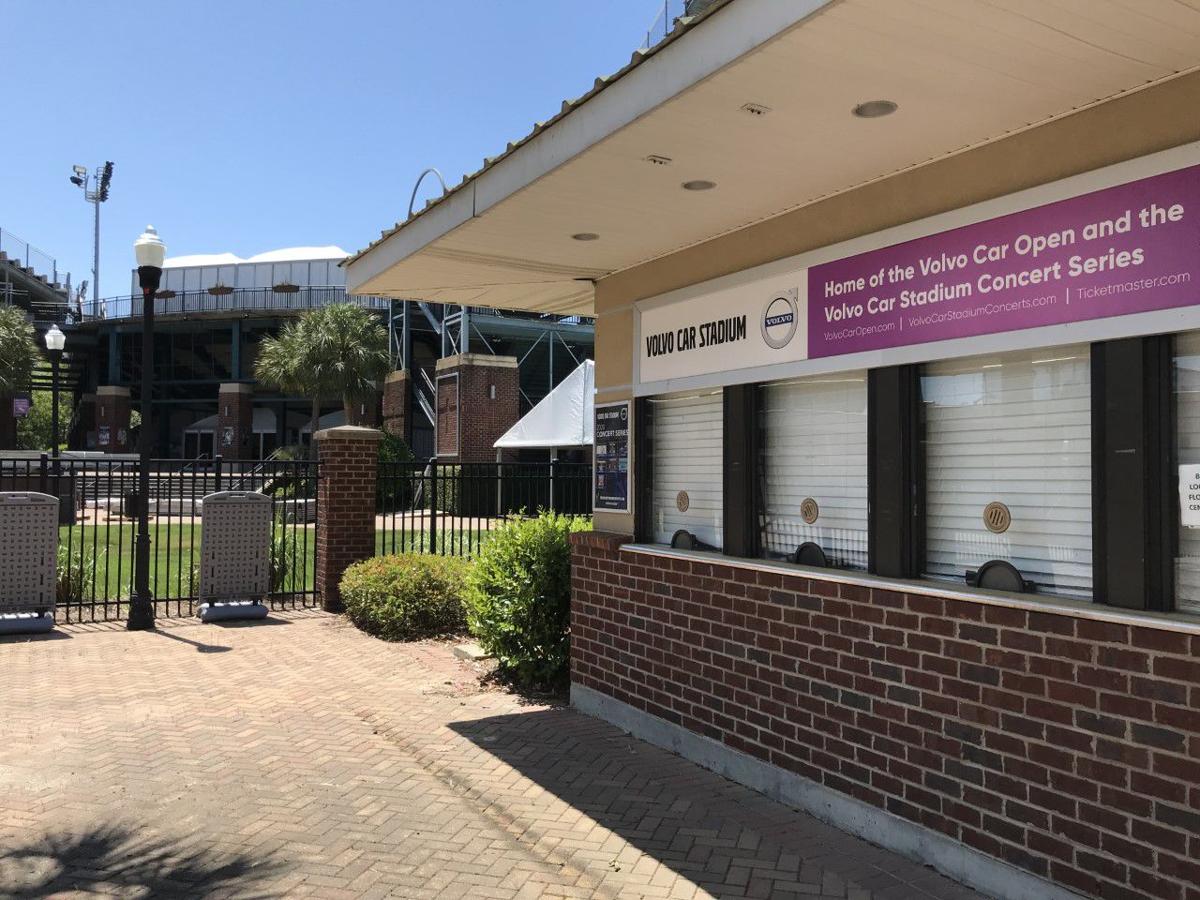 The ticket booth was shuttered on what should have been semifinal Saturday at the Volvo Car Open, canceled due to coronavirus. Jeff Hartsell/Staff 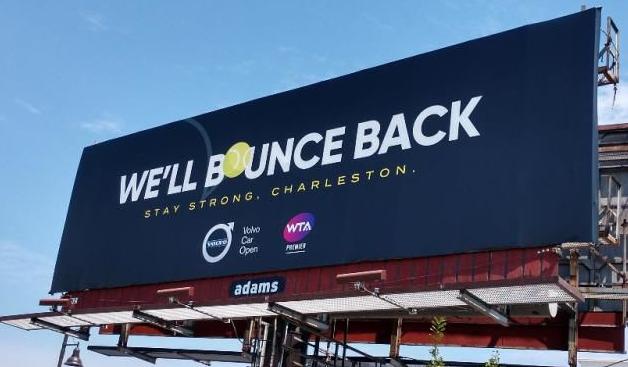 The Volvo Car Open erected a billboard vowing that "We'll Bounce Back" near the Ravenel Bridge. Provided/VCO

On what should have been semifinal Saturday at the Volvo Car Open, the front gates were locked.

A giant poster of defending champion Madison Keys dressed up the front of Volvo Car Stadium, but the seats inside were empty. The concession stands and shopping kiosks on the grounds at LTP Daniel Island, usually buzzing with activity, were silent. The media center, built to handle journalists from all over the world, stood half-constructed, with no walls or roof.

The shops and restaurants across from the stadium on Seven Farms Drive, primed for one of their biggest weeks of the year, were shuttered or quiet. Under the Wando River Bridge, on grass usually packed with parked cars, a lone lacrosse player tossed his ball against one of the bridge's pillars, enjoying the perfect weather in solitude.

"When I look at what might have been," said a sighing Bob Moran, the Volvo Car Open tournament director and the man who runs the largest women's only professional tennis tournament in North America. "We had the strongest field we've ever had, by a long shot. We were doing really well at the ticket office.

"I really saw this as a banner year for us, so this is really tough on my team, all of our volunteers and partners, our players and fans. Everybody was really excited about what this week was going to be."

The Volvo Car Open, ready to celebrate its 20th anniversary in Charleston this past week, was forced to cancel this year's tournament on March 12 due to the coronavirus pandemic. The semifinals would have been held Saturday and the championship match Sunday.

The tournament totals about 90,000 spectators for the week, with an economic impact pegged at about $30 million for the Charleston area. The Tennis Channel was set to bring about 60 hours of live coverage to 152 countries around the world.

Would Ashleigh Barty and Simona Halep, the top two players in the world according to WTA Tour rankings, have battled in that final? Would 2019 champion Madison Keys have defended her crown? Would American sensation and No. 4-ranked Sofia Kenin, who won her first Grand Slam title at the Australian Open in January at the age of 21, broken through on the VCO's green clay?

How would hometown heroine Shelby Rogers have fared? How about former world No. 1 Kim Clijsters, making a comeback as a mom at age 36 and playing in Charleston for the first time?

And how would have electronic line calls worked on clay? The Volvo Car Open was set to become the first WTA Tour clay-court event to use instant replay technology on disputed line calls.

"It's been a lonely and tough week for all of us, that's for sure," Moran said.

Even as the box seats and luxury suites stood empty this week, Moran and his staff were turning their attention to the future.

"I will say with certainty that we will have the Volvo Car Open in 2021," Moran said.

It won't be easy to get there, Moran acknowledged. A lot of money had already been spent on the 2020 VCO before it was shut down on March 12, and not much money is coming in, if any. The tournament has nine full-time employees and some part-time employees, and Moran said no furloughs or layoffs have happened yet.

"We are in the process of making those decisions now," he said.

The pandemic has shut down not only the Volvo Car Open, but a series of concerts at the stadium.

"We have three different revenue streams," Moran said. "No. 1 is the tournament, No. 2 is the concerts and third is the day-to-day tennis activities of the center. Right now, none of those streams is coming in.

"So right now, we have no revenue coming in. And we did go to quite a bit of expense in preparation for the tournament. We were not fully built out, but I'd say we were 30 to 40 percent built out for the tournament. So it's a pretty significant number that we are taking on the chin."

But with a committed local owner such as Navarro at the helm, Moran said the VCO will try to conduct business as usual in the coming year, as much as is possible.

"I don't think it will affect us in as much as we will continue with business as usual and try to build up towards 2021," he said. "It will be our 21st year on Daniel Island, but our 20th tournament, and will be planning to do a lot of things in 2021 that we were planning to do this year to celebrate our 20th anniversary."

Moran pointed out that it's not only tournaments and fans who are missing out. Players are not able to compete for their paychecks, and not all of them have the bank account of Serena Williams.

"The players have not been able to earn a living," said Moran, who sits on the WTA tournament council. "What can we do for them? It will come down to all the governing bodies — the WTA, the ATP, the ITF, the Grand Slams — coming together and figuring out a game plan."

On Saturday, the WTA postponed the Rogers Cup in Montreal, set for August, until next year. The WTA Tour is currently suspended through July 12. Wimbledon has been canceled, the U.S. Open and French Open postponed until the fall — maybe.

"The hardest thing we deal with now," Moran said, "is the unknown of when all this will end."

On Sunday, the Volvo Car Open sent a message to its fans.

"This year, the Volvo Car Open trophy goes to you — the fans," the statement said.

"Life served an unexpected curve ball, but you hit it right back. It takes grit, but you are choosing to stay home and stay safe. Your commitment to protecting your health, your loved ones and your community is what makes you the ultimate champions of 2020. We missed seeing you in the stands this year, but we know we'll see you again in Charleston soon."

Said Moran, "That's our message: We'll bounce back. And we're excited about what that will look like. We are going to come back strong."