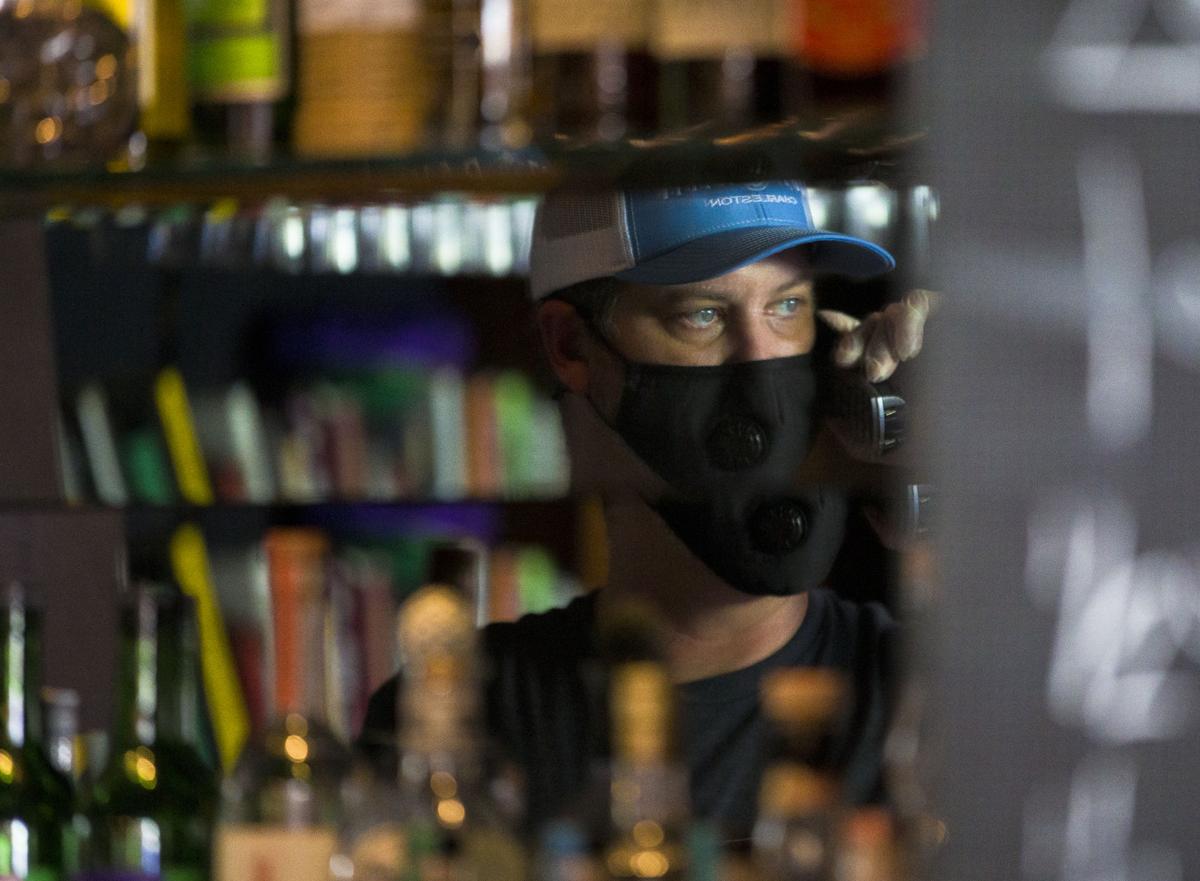 Craig Nelson, a long-time member of the Charleston chapter of the United States Bartenders Guild, worked the bar at Proof on King in late April 2020. Andrew J. Whitaker/Staff 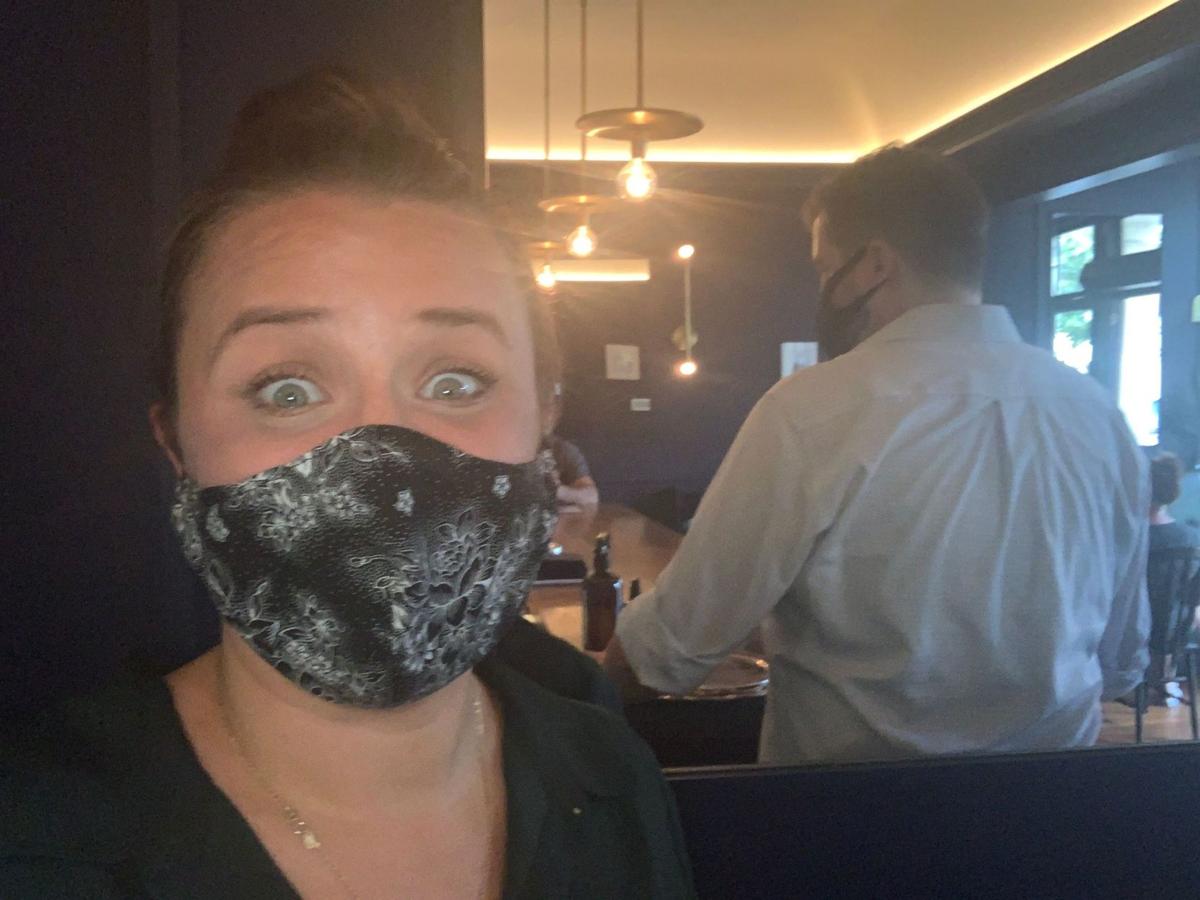 Megan Deschaine, president of Charleston's USBG chapter, masked up for her first shift back at Doar Bros. in three months. Provided

Charleston bartenders, bar owners and the local chapter of a national drink-makers guild are joining a chorus of individuals and organizations demanding that Charleston make it mandatory to wear masks in some public settings.

On Wednesday afternoon, the Facebook page of the United States Bartenders Guild's Charleston chapter shared a message with its 2,200-some followers, encouraging them to contact the city's hotline to register their support for a rule requiring face coverings.

"Not only are people’s lives at risk, so are many of our local businesses because people are not wearing masks or following social distancing guidelines," read the post in part.

The council is scheduled Thursday evening in a special session to discuss implementing a mask ordinance like those in place elsewhere in South Carolina, including Greenville and Columbia. In those cities, masks are mandatory (or soon will be) for employees and patrons of certain stores, including supermarkets; in Columbia, the mandate extends to all commercial businesses within city limits.

As proposed, Charleston's ordinance would go even further, requiring a facial covering for most public activities, including entering restaurants and bars.

Bar owners like Dwayne Mitchell of Local 616 approve of the proposed measure.

"It's time for the city to start governing its people to keep everyone safe and healthy," he said. Though it remains shuttered, Local 616 is selling masks emblazoned with its beloved owner's likeness to raise funds.

The pro-mask stance of the city's publicans squares with that of laborers across the Charleston food and beverage community. After numerous positive COVID-19 cases surfaced at West Ashley's Whole Foods, a worker there risked possible retaliation to tell The Post and Courier that a mask mandate in Charleston would be a "game-changer."

With COVID-19 cases surging in Charleston County and across the state on Tuesday, a food and beverage worker asked Charleston's City Council to "consider implementing regulations for the hospitality community."

"I'm speaking on behalf of our board: yes, we are all proponents," said Megan Deschaine, a downtown Charleston bartender and USBG Charleston president. She said the chapter has eight board members including herself and about 80 dues-paying members in the city.

With its members throughout the country hit hard by the economic downturn caused by the coronavirus pandemic, the USBG's national body has been coordinating efforts for relief throughout the spring, going so far as to launch an emergency grant fund to provide financial assistance to bartenders deprived of of work thanks to shelter-in-place orders.

A spokesman for the organization, which is based in California and active in 50 cities, did not immediately respond to an inquiry about its stance on mandatory masks.

Craig Nelson, owner of Proof on King Street and a 10-year guild member, told The Post and Courier he was in favor of the organization's call for the requirement. "I believe in the science, but even if you don't, what's the big deal?"

With cocktails out and kitchens limited, Charleston area bars scrounge for cash, customers

Other bartenders and bar owners who are not a part of the guild, which is focused more on cocktails than the wine trade or the high-volume sale of beer, voiced their support for the mandate as well.

"I'm all for people's freedom of choice, but I would completely understand if they made masks mandatory," said Steve Sher, owner of Silver Dollar on King Street.

Some were more pointed.

"Not quite sure why (this) is still a thing people are debating," said Joey Goetz, the longtime Belmont mixologist who has since moved on to open James Island's Bar George.

"I'm not a part of USBG but I 1,000 percent support mandatory masks," said Jayce McConnell, head bartender at Edmund's Oast. "Pants are more uncomfortable than masks, and (customers) don't throw a fit when we ask you to wear those."

Deschaine, who was one of the volunteers who helped USBG vet applications for the emergency grants in April and May, returned to her post Wednesday at Doar Bros. on Meeting Street for the first time in three months.

She wore a mask.