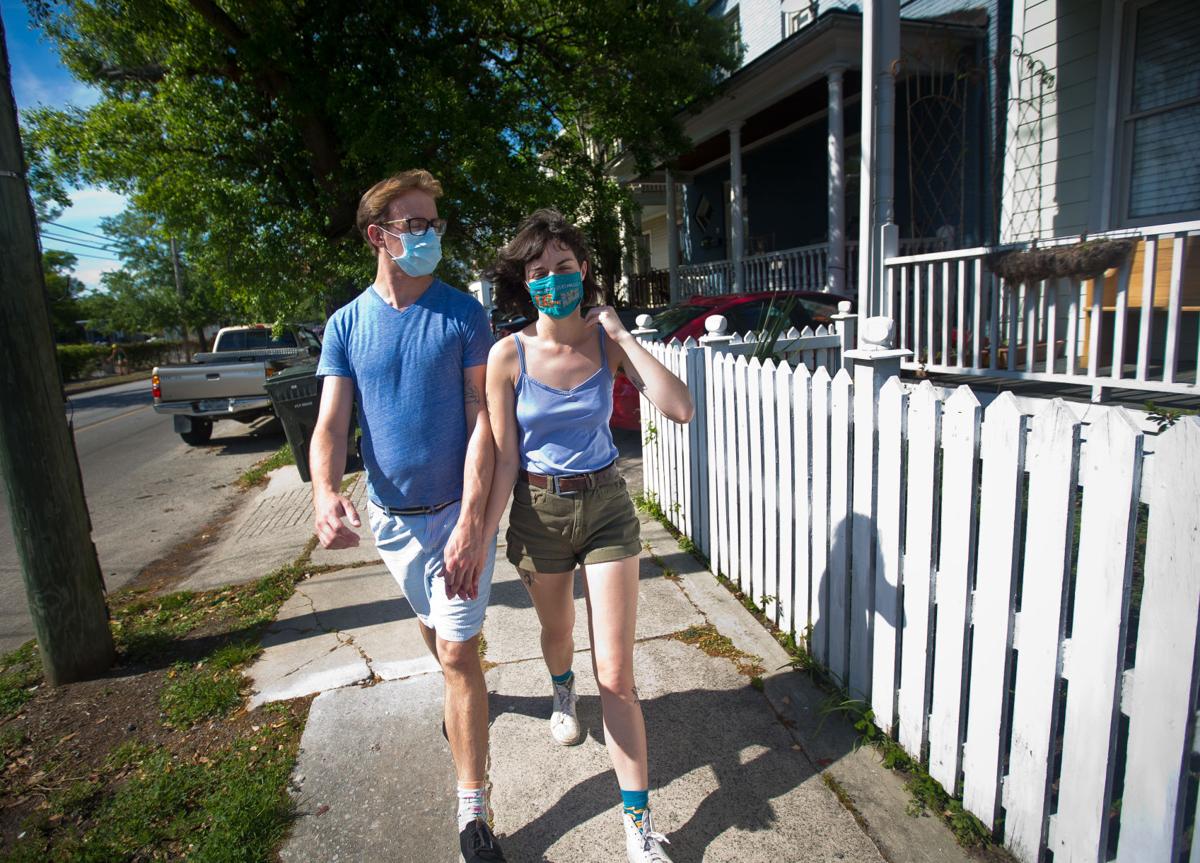 Jakob Hahn and Gabrielle Wolfe hold hands while out for their daily walk along Rutledge Avenue on Monday, April 6, 2020, in Charleston. Wolfe wears her homemade mask reading "High Capitalism is Cancelled Eat the Rich." Andrew Whitaker/Staff 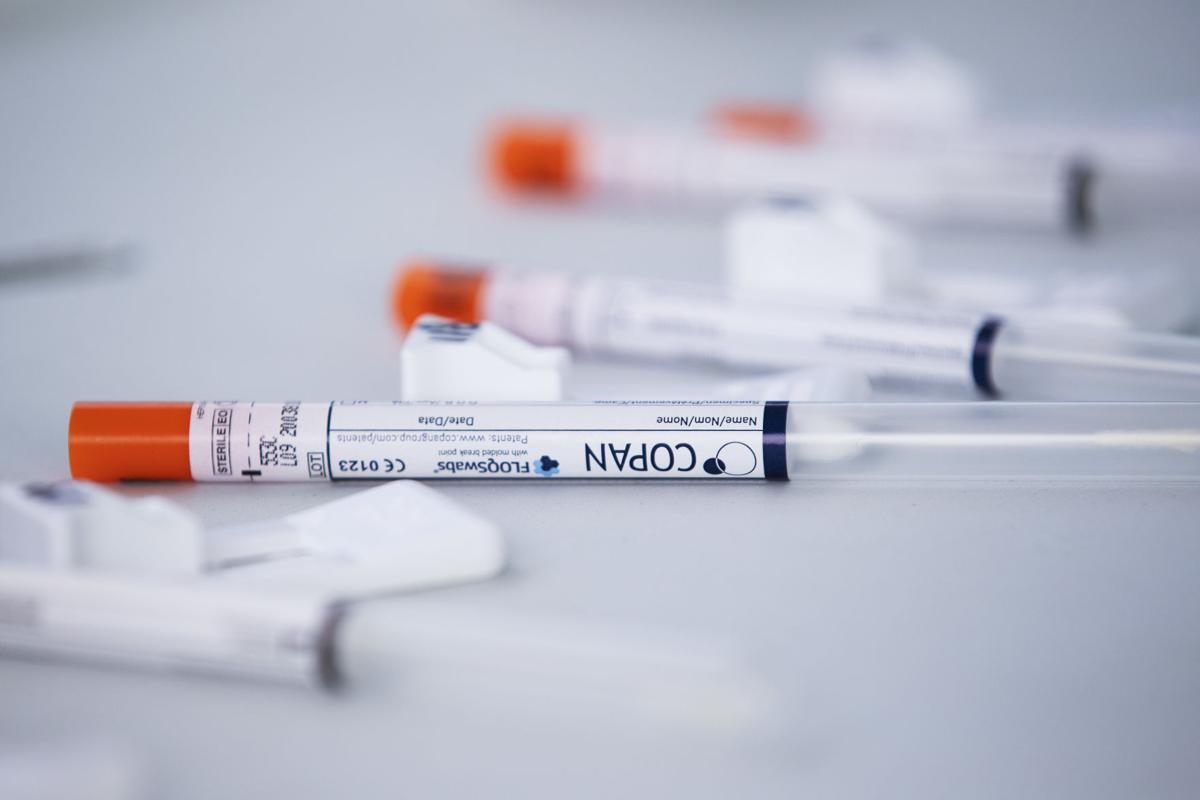 Swabs used to test for the coronavirus are set out on a table in preparation for patients to come through the Roper St. Francis drive-thru testing site on Rivers Avenue in North Charleston on Monday, March 30, 2020. File/Lauren Petracca/Staff 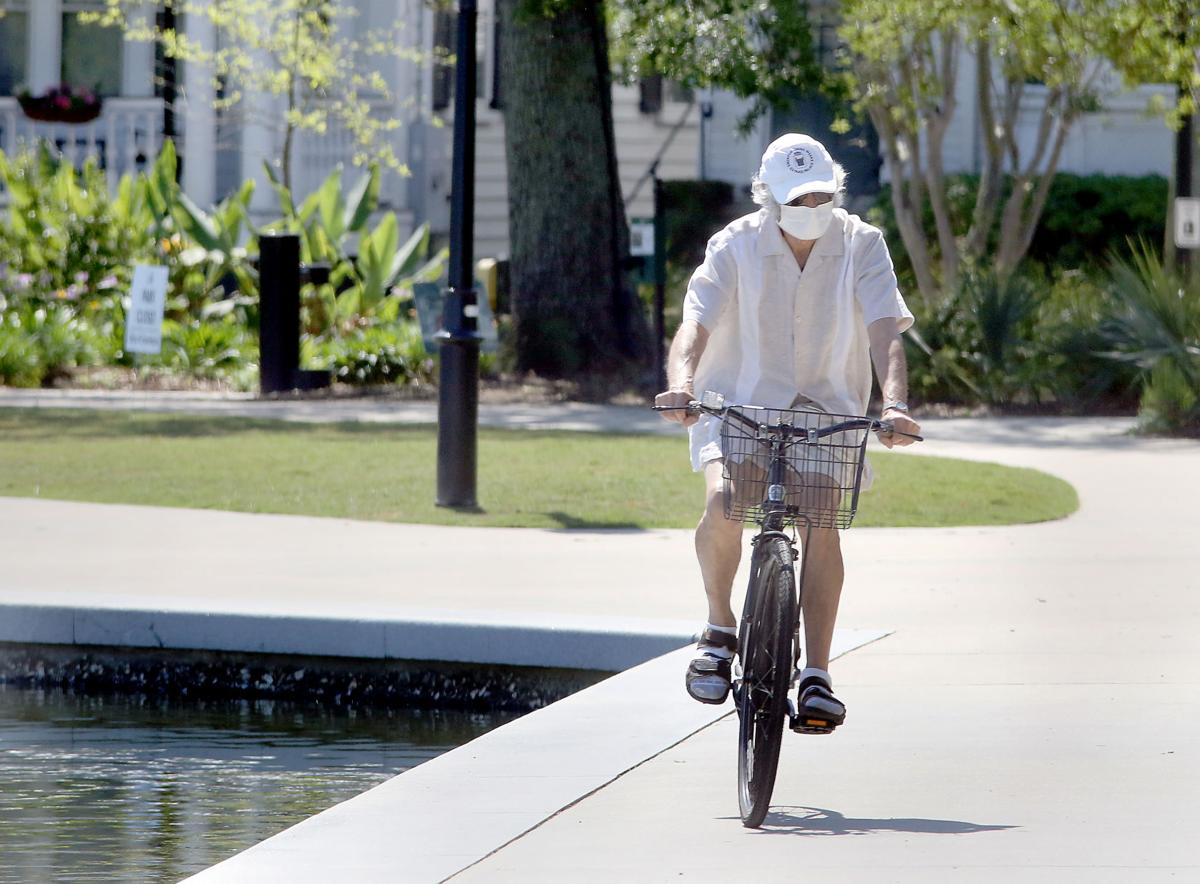 A man wears a mask as he rides his bike around Colonial Lake on Monday, April 6, 2020. Brad Nettles/Staff

Jakob Hahn and Gabrielle Wolfe hold hands while out for their daily walk along Rutledge Avenue on Monday, April 6, 2020, in Charleston. Wolfe wears her homemade mask reading "High Capitalism is Cancelled Eat the Rich." Andrew Whitaker/Staff

Swabs used to test for the coronavirus are set out on a table in preparation for patients to come through the Roper St. Francis drive-thru testing site on Rivers Avenue in North Charleston on Monday, March 30, 2020. File/Lauren Petracca/Staff

Officials announced 183 new cases of the coronavirus on Monday, bringing the state's total to 2,232. Four new deaths also were reported.

The four recently deceased patients were elderly with underlying health conditions, according to the S.C. Department of Health and Environmental Control. They resided in Anderson, Horry, Richland and Spartanburg counties. So far, 48 people have died in South Carolina of COVID-19, the disease caused by the novel coronavirus.

Although 2,232 cases have been confirmed, DHEC estimated Monday that South Carolina could have around 15,300 total cases currently.

Gov. Henry McMaster issued a "work or home" order Monday, going into effect at 5 p.m. Tuesday. The executive order is mandatory, he said, as his office's previous recommendations and suggestions have not been heeded by citizens.

"We hope this order today will reduce the rising number of infections," he said in a news conference.

For Easter services, he recommended services continue, but online. He also issued another executive order to limit the number of shoppers in stores.

The growth in the number of cases is accelerating, said Dr. Linda Bell, the state's top epidemiologist. An average of 187 new cases were reported each day last week, a sharp increase from the average of 90 new cases per day the week before.

More than 21,000 people in South Carolina had been tested for the virus as of Monday. About 10 percent of those tested positive, Bell said.

DHEC noted on its website Monday detailing cases by ZIP codes that there are an estimated 15,341 cases in the state. This is based on an estimate that for every diagnosed case, there could be as many as nine people with the virus who "remain unidentified in the community."

Officials with Roper St. Francis Healthcare said Monday that 31 new patients have been diagnosed with COVID-19.

State officials announced a plan to add at least 3,000 beds to hospitals around South Carolina by May 5. The state's health care system currently has around 5,900 beds available, officials said Monday.

As the number of coronavirus cases in South Carolina continues to rise, a private lab conducting tests for the virus has said its backlog has dropped by more than half, a possible sign of improved disease detection to come.

In a statement released by Quest Diagnostics on Monday, the private lab said it had performed and reported results of nearly 500,000 coronavirus tests and was continuing to carry out tests at 12 labs. The statement referenced national statistics.

"Through these laboratories, we are now able to perform more than 35,000 COVID-19 tests a day," the statement said. "In addition, we have reduced our backlog significantly."

Quest's backlog had been about 160,000 tests as of March 25, according to the statement. The current backlog was 80,000, which "corresponds to approximately two to three days of testing."

The city of Charleston’s ordinance, which began March 26, has faced some pushback from residents, although the majority have been compliant, Police Chief Luther Reynolds said on Sunday.

“We’re not perfect,” he said. “But people are really starting to take this seriously.”

With some states experiencing a much higher fatality rate than South Carolina, some community members have traveled to help. Joint Base Charleston sent six medical workers to help with cases in New York City, officials said Monday.

The first and so far only inmate in Charleston County to test positive for the virus was released Monday on a judge's order, a Sheriff's Office spokesman said. He was given a mask and received health instructions, he said.

The detention center, which usually has around 1,200 inmates, now has around 940 inmates. After conferring with solicitors, the facility has released some inmates lately in order to minimize the risk of the virus spreading through the jail.