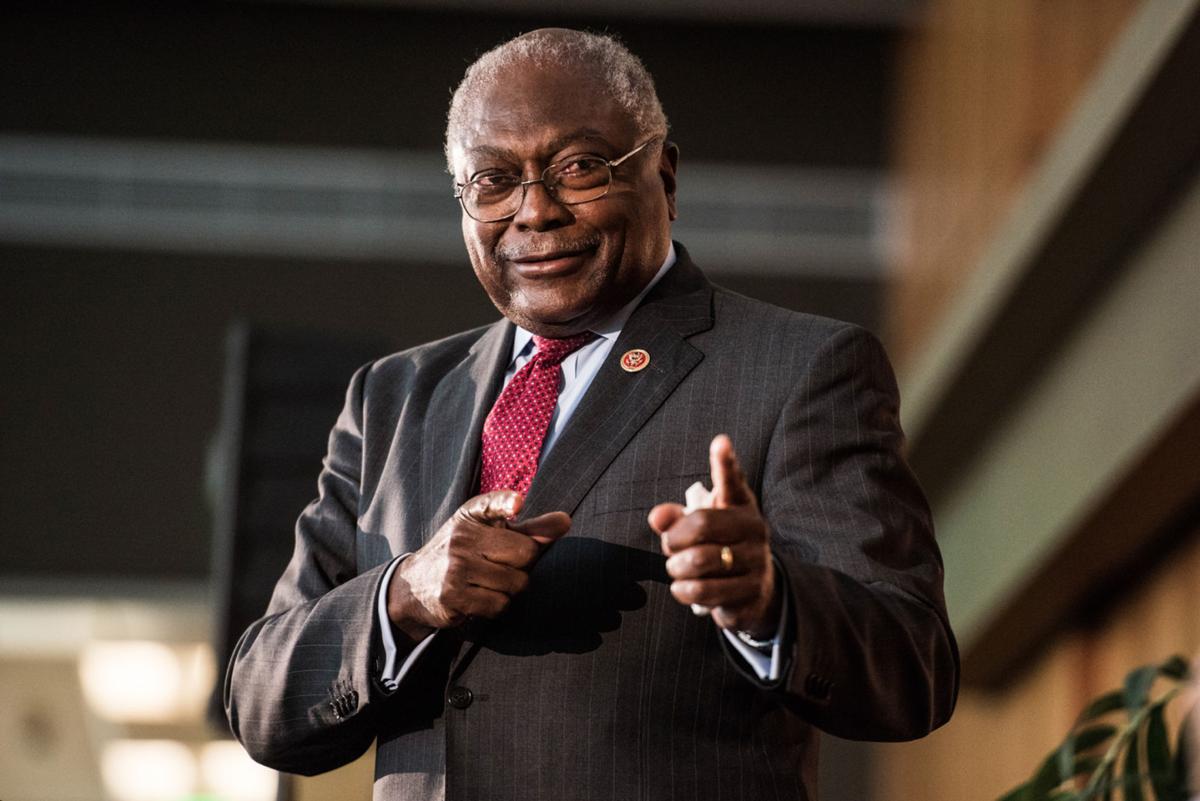 U.S. Rep. James Clyburn speaks at the University of South Carolina, Monday, Nov. 23, 2015, in Columbia, S.C. The congressman formally announced the donation of his congressional papers Monday to the university to help establish a new research and education center on civil rights. (AP Photo/Sean Rayford) 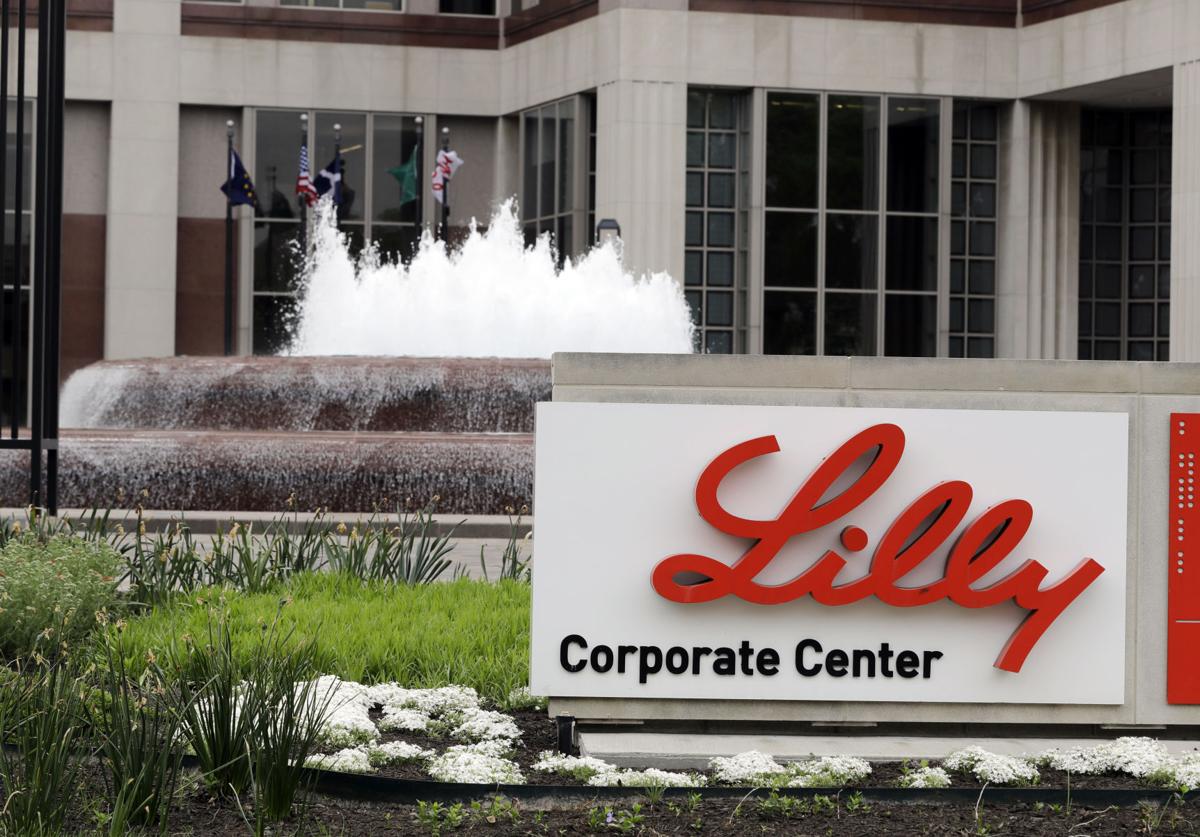 This April 26, 2017, photo shows the Eli Lilly and Co. corporate headquarters in Indianapolis. On Thursday, Sept. 28, 2017, the Food and Drug Administration approved Eli Lilly's Verzenio, a new medicine for treating adults with a common type of breast cancer that has spread. (AP Photo/Darron Cummings) 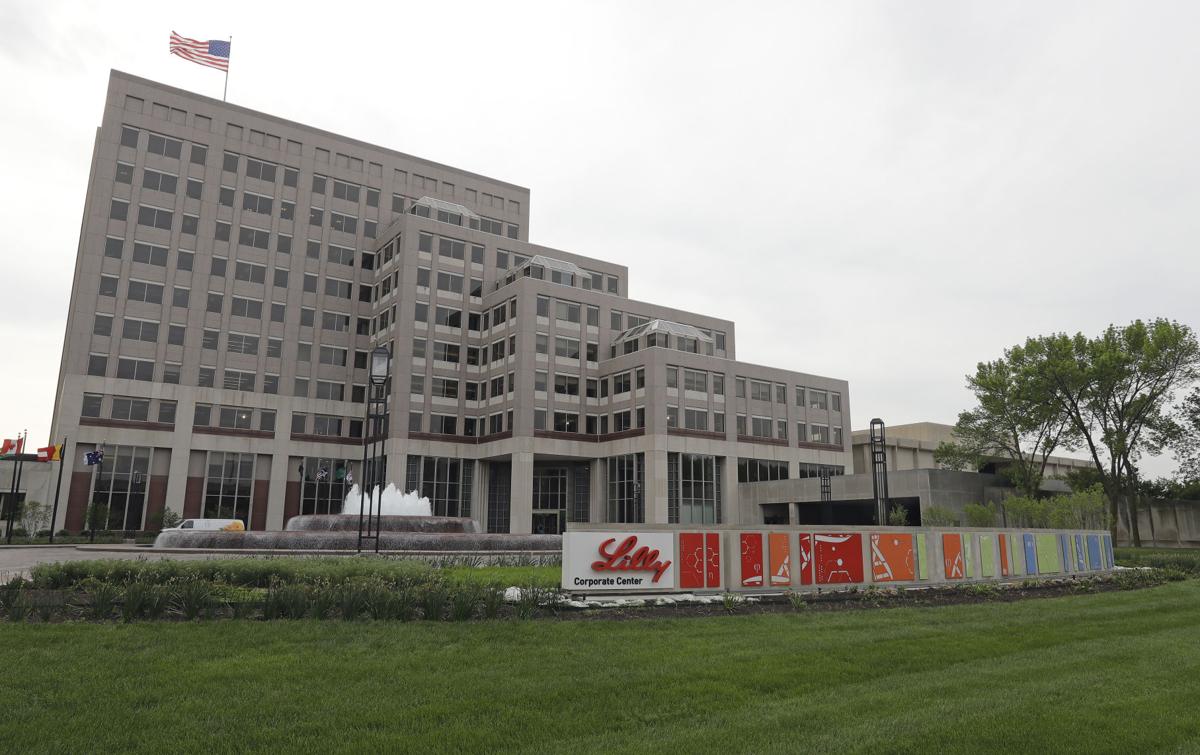 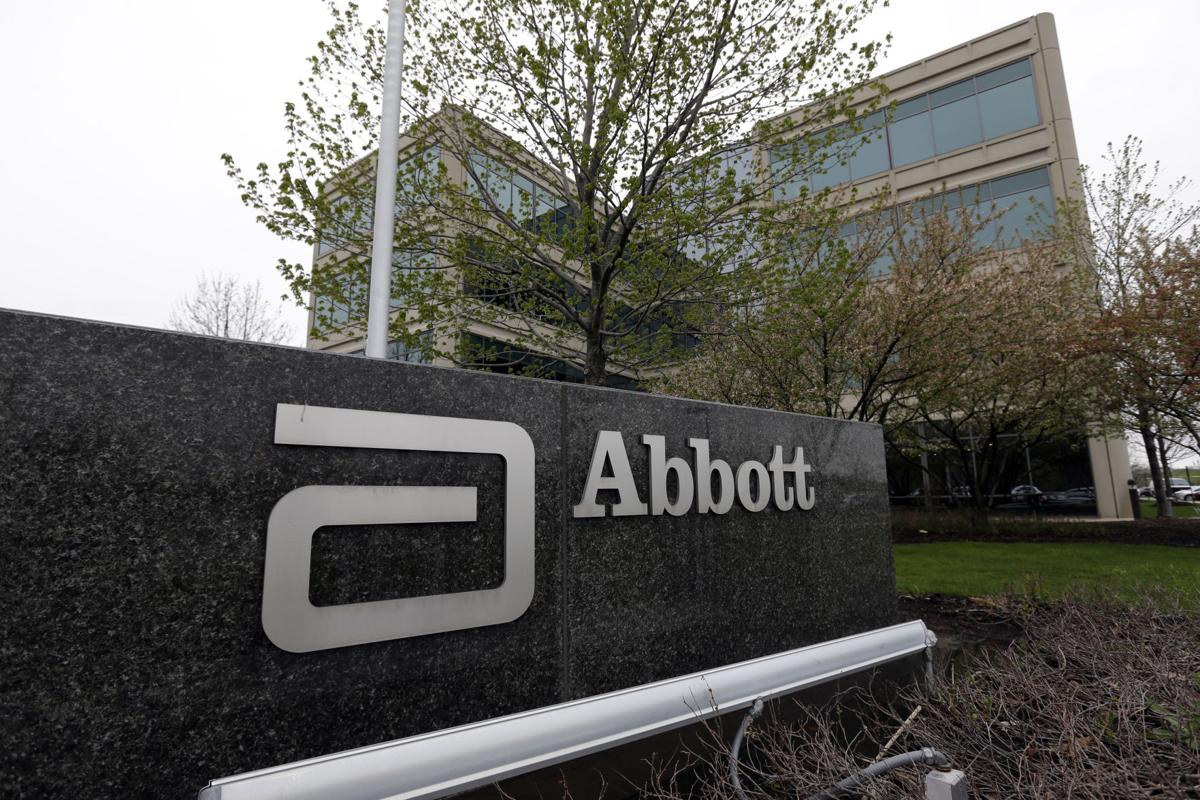 FILE - This Thursday, April 28, 2016, file photo shows a sign at an Abbott Laboratories campus facility in Lake Forest, Ill. Johnson & Johnson said Friday, Sept. 16, that it is paying more than $4.3 billion in cash to buy the eye health unit of Abbott Laboratories as it seeks to boost its vision business. (AP Photo/Nam Y. Huh, File) 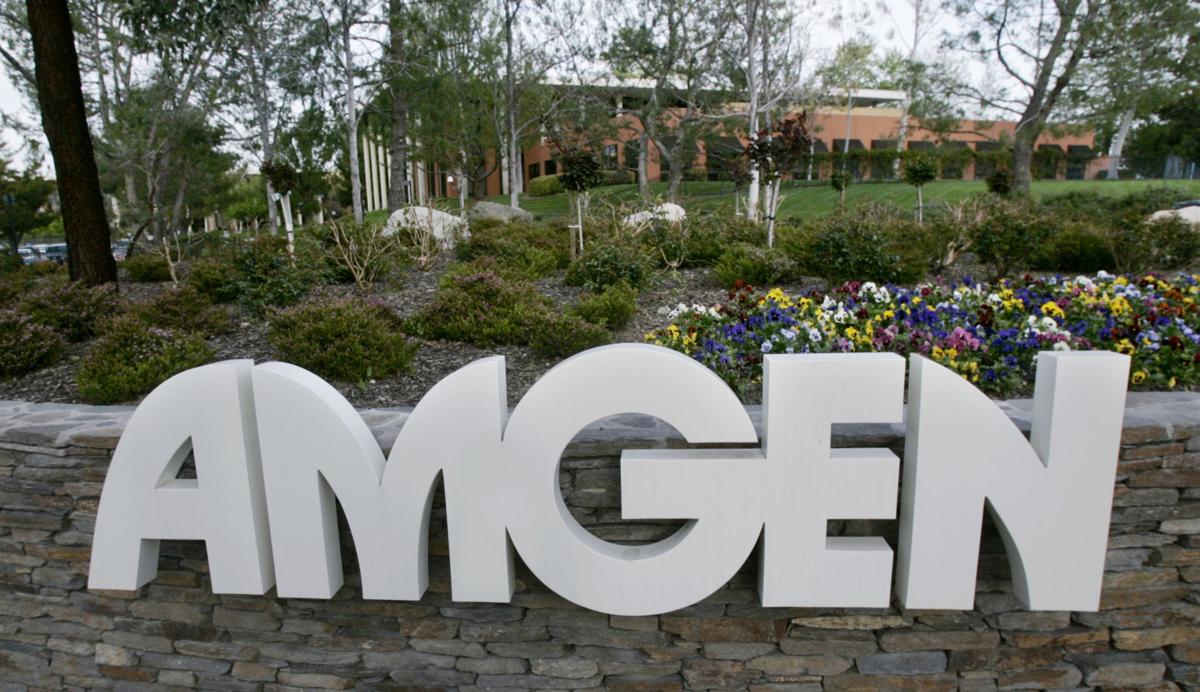 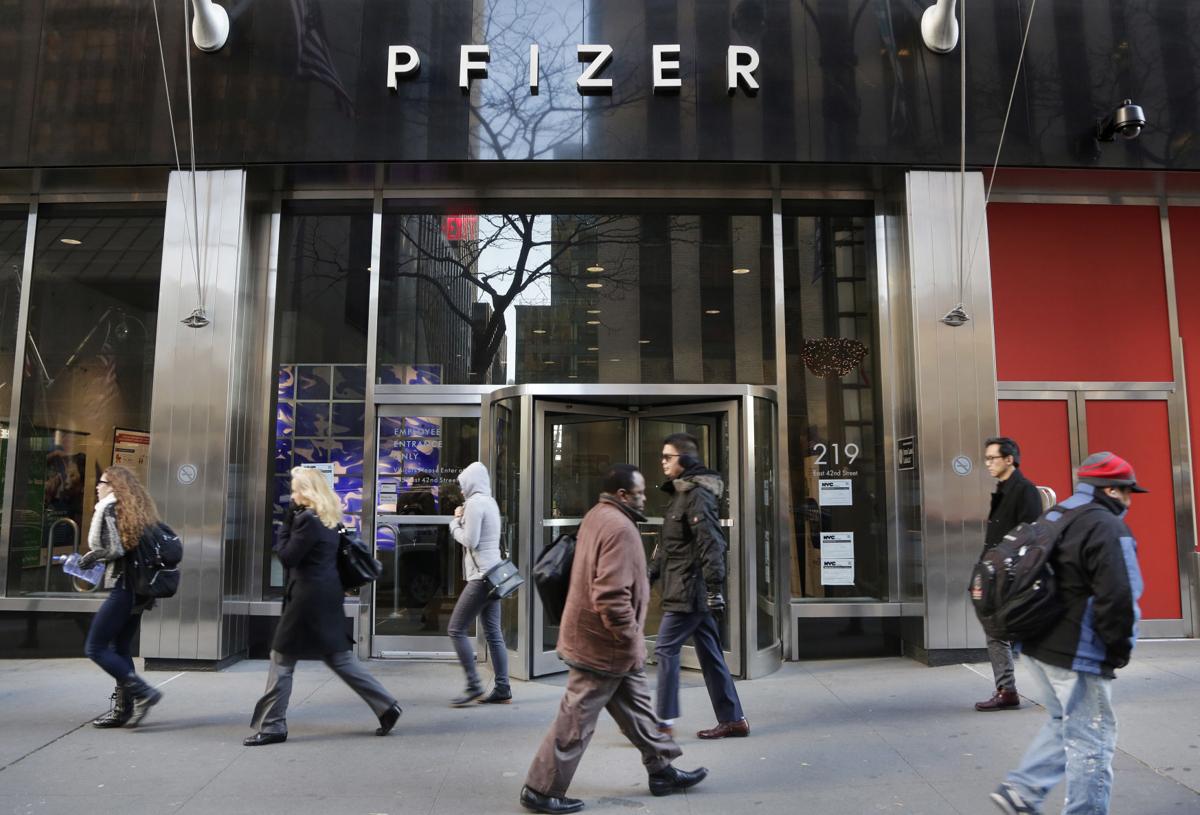 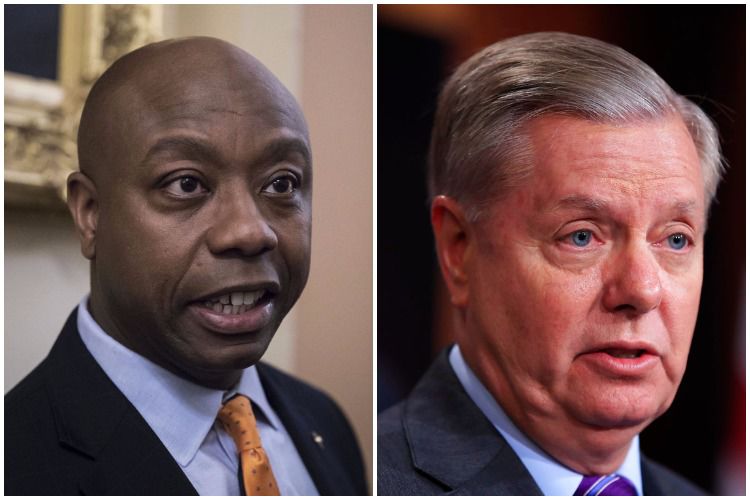 U.S. Rep. James Clyburn speaks at the University of South Carolina, Monday, Nov. 23, 2015, in Columbia, S.C. The congressman formally announced the donation of his congressional papers Monday to the university to help establish a new research and education center on civil rights. (AP Photo/Sean Rayford)

This April 26, 2017, photo shows the Eli Lilly and Co. corporate headquarters in Indianapolis. On Thursday, Sept. 28, 2017, the Food and Drug Administration approved Eli Lilly's Verzenio, a new medicine for treating adults with a common type of breast cancer that has spread. (AP Photo/Darron Cummings)

FILE - This Thursday, April 28, 2016, file photo shows a sign at an Abbott Laboratories campus facility in Lake Forest, Ill. Johnson & Johnson said Friday, Sept. 16, that it is paying more than $4.3 billion in cash to buy the eye health unit of Abbott Laboratories as it seeks to boost its vision business. (AP Photo/Nam Y. Huh, File)

While South Carolina's longest-serving congressman threw his support to research and the growth of the multibillion-dollar pharmaceutical industry in his district, drug- and device-making companies rewarded him by giving liberally to his campaign war chest for years.

U.S. Rep. Jim Clyburn, D-Columbia, has collected more in the last decade from powerful political action committees attached to the pharmaceutical industry than anyone else in the House or Senate, according to Kaiser Health News and a Post and Courier analysis.

During that time, he has brought in more than $1 million in campaign contributions from an industry known for aggressive lobbying.

Scrutiny of where Clyburn, 78, receives donations from is relevant given his recent election to House Majority Whip, the No. 3 leadership position in the House. He has been among the top Democrats in Congress for more than a decade, making it little surprise he would be among the chief recipients of the industry's cash.

Still, his total contributions from the industry, which makes everything from ibuprofen to joint replacements, stands out when matched against his peers. The reason is likely a combination of his hand in the passage of a health care overhaul, his leadership roles and the characteristics of his district, which includes two major research institutions.

Clyburn also has been in office since 1992; most other members of the delegation have served only since 2010.

Cyburn spokesman Patrick Devlin said the congressman received the donations because of his "strong support for medical and scientific research." He also noted Clyburn was an architect of the Affordable Care Act, later ruled a win for the pharmaceutical industry, and he has fought to protect the health insurance law from Republican attempts to dismantle it.

"As Majority Whip in the new Congress next year, he looks forward to passing this important legislation soon," Devlin said.

A member of the million-dollar club

U.S. Rep. Nancy Pelosi, widely expected to be the new House speaker, brought in about $193,000 over 10 years, according to Kaiser Health News. U.S. Rep. Kevin McCarthy, the current House majority leader, has received barely less than Clyburn in the same 10-year period, by a margin of just $5,000.

Among his peers from South Carolina, Republican Sen. Tim Scott has received the second-most in the years since coming to Washington in 2012, first in the House and later in the Senate. Yet Scott's sum does not amount to even one-third of what Clyburn has earned from his relationships with top drug- and device-making companies.

The pharmaceuticals and device business has spent about $216 million so far this year on lobbying, according to the Center for Responsive Politics. The industry's sales in 2016 totaled $333 billion, a U.S. Department of Commerce report states.

It's not even a big slice of Clyburn's fundraising pie: Only about 5 percent of the money he accepted in 2017 and 2018 came from pharmaceutical and medical device groups.

And the long-serving Democrat has accepted less and less over time from pharmaceutical and medical device companies: The most he took in a single year was $122,000 in 2009.

Clyburn was the majority whip at the time. Health industries were spending money and lobbying aggressively to secure their interests as the Affordable Care Act took shape.

Drug prices are likely to again be a hot-button topic this year, with candidates in both parties and the president promising to address the issue.

Soaring prescription prices are a concern for many. A poll from the Kaiser Family Foundation found 80 percent of patients think their costs are unreasonable.

David Mitchell, founder of advocacy group Patients for Affordable Drugs, said bipartisan support for lowering prices was clear at the ballot box this November. The blood cancer patient said he is hopeful next year will bring change.

But a problem remains, Mitchell said: Certain leaders in the industry — and in politics — are still benefiting from high prices. When it comes to Clyburn and other legislators who accept what Mitchell called "corrosive" campaign cash, Mitchell said his group will be eyeing what they do next, and it won't hesitate to call them out if their promises to tackle high drug prices fall flat.

None of Clyburn's top donors responded to questions about why he has been a popular target of their campaign cash. The powerful lobbying group Pharmaceutical Research and Manufacturers of America, also known as PhRMA, said it doesn't comment on its contributions.

But the group said its efforts are focused on furthering research.

"In this new era of medicine, we believe public policy should incentivize innovation and the development of new treatments and cures," the group said in a statement.

Clyburn's office did not respond to follow-up questions about the specific ways he supports research.

A building at the Medical University of South Carolina in downtown Charleston bears his name and hosts researchers who study drug development, among other things. It is dedicated to the congressman because of his dedication to supporting research efforts and his interest in addressing South Carolina's health disparities, said Heather Woolwine, spokeswoman for MUSC.

Clyburn helped to secure the funding for the institution's Bioengineering and Drug Discovery buildings, she said.

"We believe that he understands that the strides we make on our campus can create new standards of care for all Americans, promote greater access to quality care in rural areas, and tackle problems such as why some medications work well in certain ethnicities and not in others," Woolwine said.

Yet South Carolina's biopharmaceutical business is still not exactly booming, compared to other Southern states.

According to a report from PhRMA, South Carolina's economic output from the industry is $7.9 billion, a middling amount among Southern states. North Carolina's output was $92.6 billion.

If Clyburn has had a hand in bringing research money to his district, he's been successful. The 6th District, which includes two of South Carolina's three major research institutions — MUSC and the University of South Carolina — has raked in more than $1 billion in funding from the National Institutes of Health since the 2009 fiscal year.

Does it affect his policies?

Whether Clyburn's policies or voting record have been affected by the contributions he has received would be hard to say — especially given how few people were willing to discuss the top Democrat with The Post and Courier.

Eleven academic centers, advocates in drug pricing and economic groups did not to respond to, or declined, requests to discuss the issue.

Jordan Ragusa, a political science professor at the College of Charleston, said research has shown the dollars don't have much effect on how members vote.

More important factors are party loyalty and the demands of constituents, he said. A review of the legislation Clyburn has introduced shows no laws that would clearly be a boon for the industry that has been so generous to his campaigns.

"The evidence is that this money doesn’t have these undue influences that people think," Ragusa said.

Eli Lilly, for instance, disclosed in its latest filing that its lobbyists worked on issues like regulation of the drug industry, laws that require manufacturers to pay the government to regulate drugs and "multi-lateral threats ... to the biopharmaceutical industry."

But how debates about drug prices will unfold won't come down to who has gotten money from what interest groups, Ragusa said.

Rather, the conversation has stalled because lawmakers on both sides of the aisle can't agree.