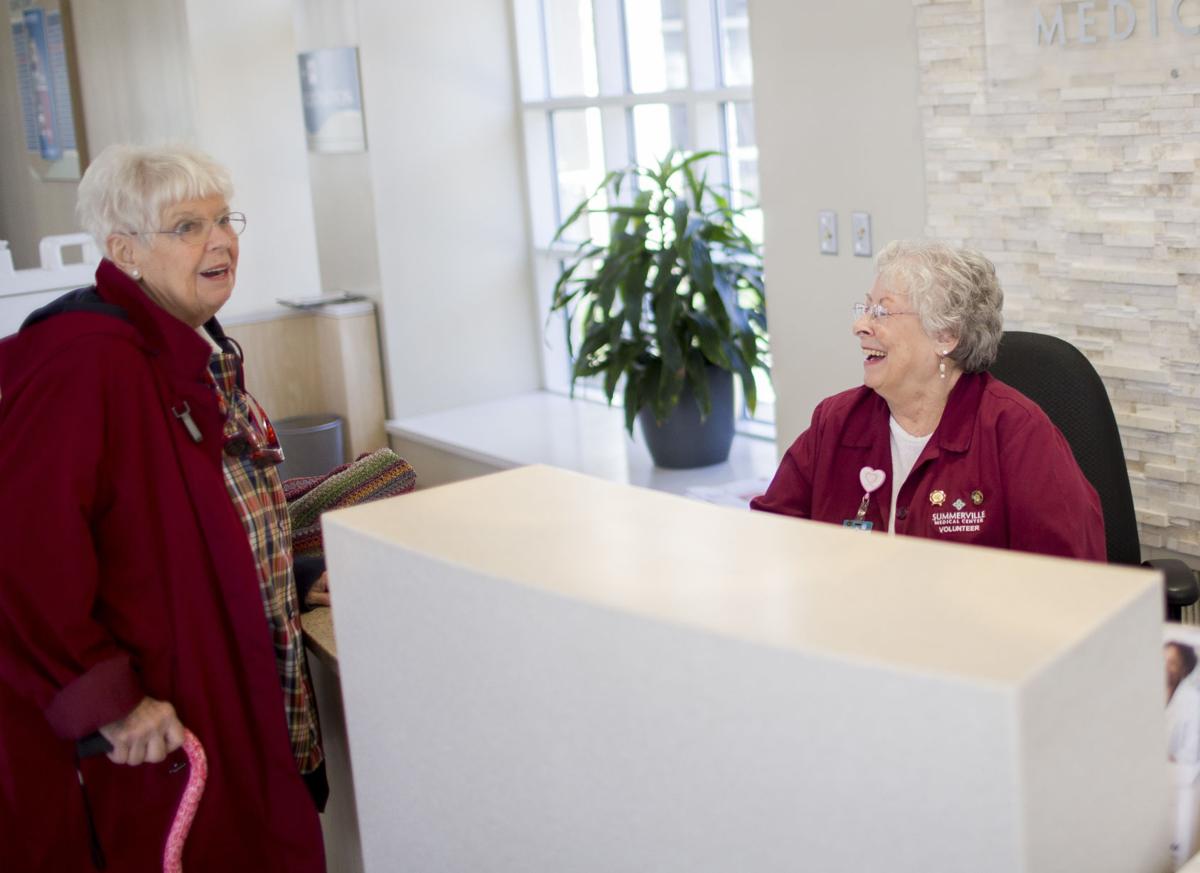 Bonnie Dan, right, interacts with people at the front desk at Summerville Medical Center on Thursday, April 5, 2018. She had both of her knees replaced in recent years. Andrew J. Whitaker/Staff 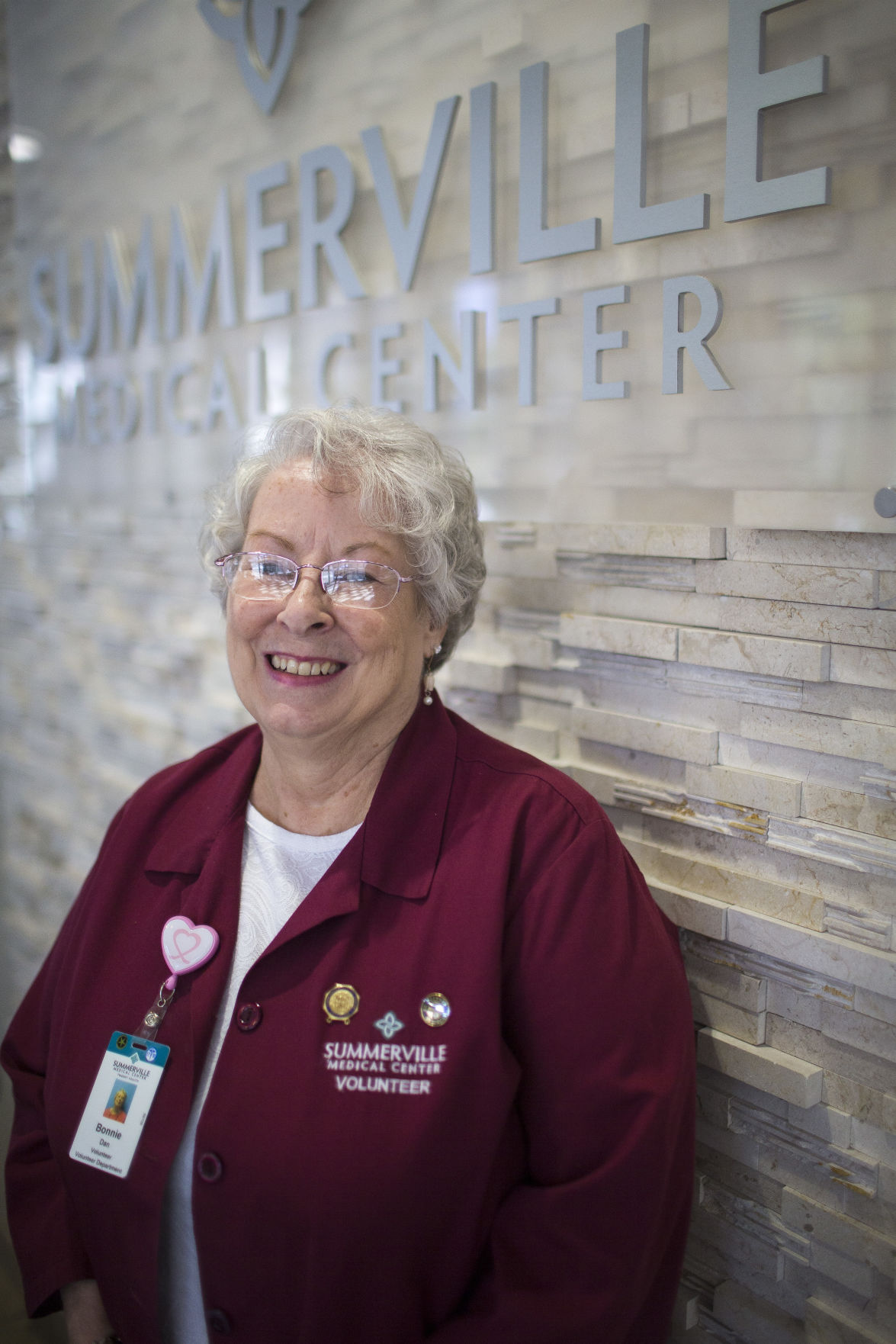 Bonnie Dan, 75, had her first knee replacement in 2016 and her second in 2017. Her doctor used a technology to manufacture custom replacements with 3-D printing. Andrew J. Whitaker/Staff

Bonnie Dan, right, interacts with people at the front desk at Summerville Medical Center on Thursday, April 5, 2018. She had both of her knees replaced in recent years. Andrew J. Whitaker/Staff

Bonnie Dan, 75, had her first knee replacement in 2016 and her second in 2017. Her doctor used a technology to manufacture custom replacements with 3-D printing. Andrew J. Whitaker/Staff

It's an experience many Americans are familiar with: Bonnie Dan retired and finally began to consider the pain in her knees that had been bothering her for years.

She had been getting steroid injections for a long time to ease the pain. Sometimes the injections would work for several months, and sometimes not at all. She increasingly found stairs to be a challenge and grocery shopping trips to be a hardship.

When she approached Dr. Eric Stem of Lowcountry Orthopaedics & Sports Medicine, her doctor of 10 years, he told her she could have a knee replacement that fit her anatomy perfectly.

Dan agreed — twice. She had her first knee replaced in 2016 and the second the year after.

But these weren't ordinary knee replacements. First, Stem used advanced imaging technology to create "maps" of Dan’s knees with a CT scan. Those scans were then sent to a company called Conformis, which manufactured custom instruments and cutting guides for her knee replacement.

A wax replica of her knees was built using a 3-D printer, then the knee replacement was made with metal components.

Traditional knee replacements look similar to the custom models, but Stem said they don't always align exactly with the patient's bone structure, which can cause complications for the patient down the road.

Dan, 75, said the custom knees have done the trick. She continues to volunteer at Summerville Medical Center.

Dan never had a traditional knee replacement, so it's hard to say how she would have fared otherwise. As the number of Americans seeking a knee or hip replacement continues to increase, companies such as Conformis, which made both of Dan's custom knees, have attempted to corner the market. The average knee replacement costs about $50,000 without insurance, according to AARP. Most of those costs are covered by health insurance, typically Medicare.

Stem has been using the Conformis knee for about four years, he said, and demand for custom product is increasing. Now, he puts in a few every month.

"It’s made for the patient," Stem said. "That’s the benefit. It fits perfectly for every patient."

Stem said his patients also find the Conformis knee feels more like a normal knee than a traditional replacement. Stem received payments from Conformis totaling about $300 in 2016, though that's far less than the roughly $15,000 physicians in his specialty received on average from third-party companies.

At the local Zucker Institute for Applied Neurosciences, constructing 3-D spine implants for patients accounts for about 30 percent of all the institute's projects. To create those devices, a laser beam builds up layers of powder over and over until the implant takes shape, said Mark Semler, an engineer at the institute.

Semler said titanium-based devices are becoming more popular. The Zucker Institute focuses on spine implants, in large part because of a relationship between the institute and neurosurgeons at the Medical University of South Carolina.

Semler said at the national conferences he attends, "everyone is working on a 3-D-printed implant." Many use titanium, he said, because the body tends to accept the metal well.

"The bone just loves it," Semler said. "More and more companies have to do it to compete."

Stem said the cost of the Conformis knee replacement is roughly comparable to a traditional knee replacement. The CT scan required eats up the majority of a patient's out-of-pocket cost.

Dan's only regret: She wishes she hadn't waited so long to have it done.