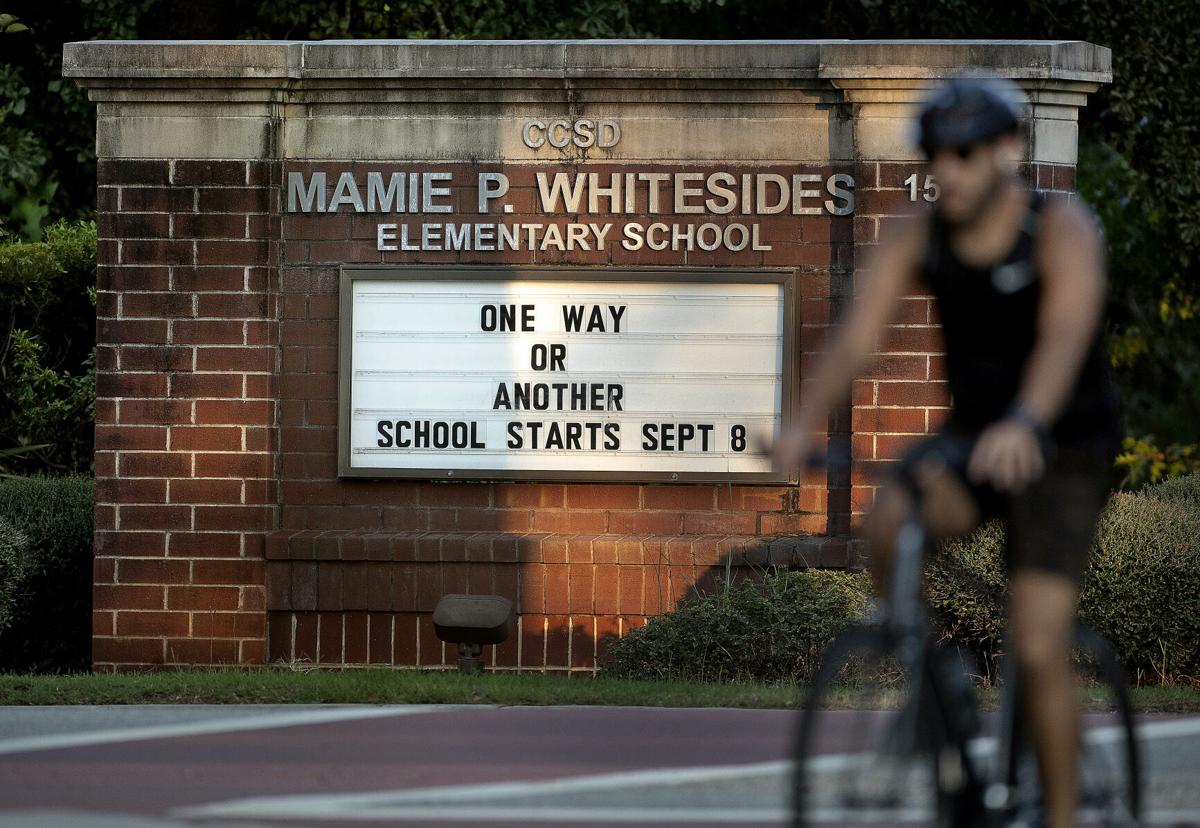 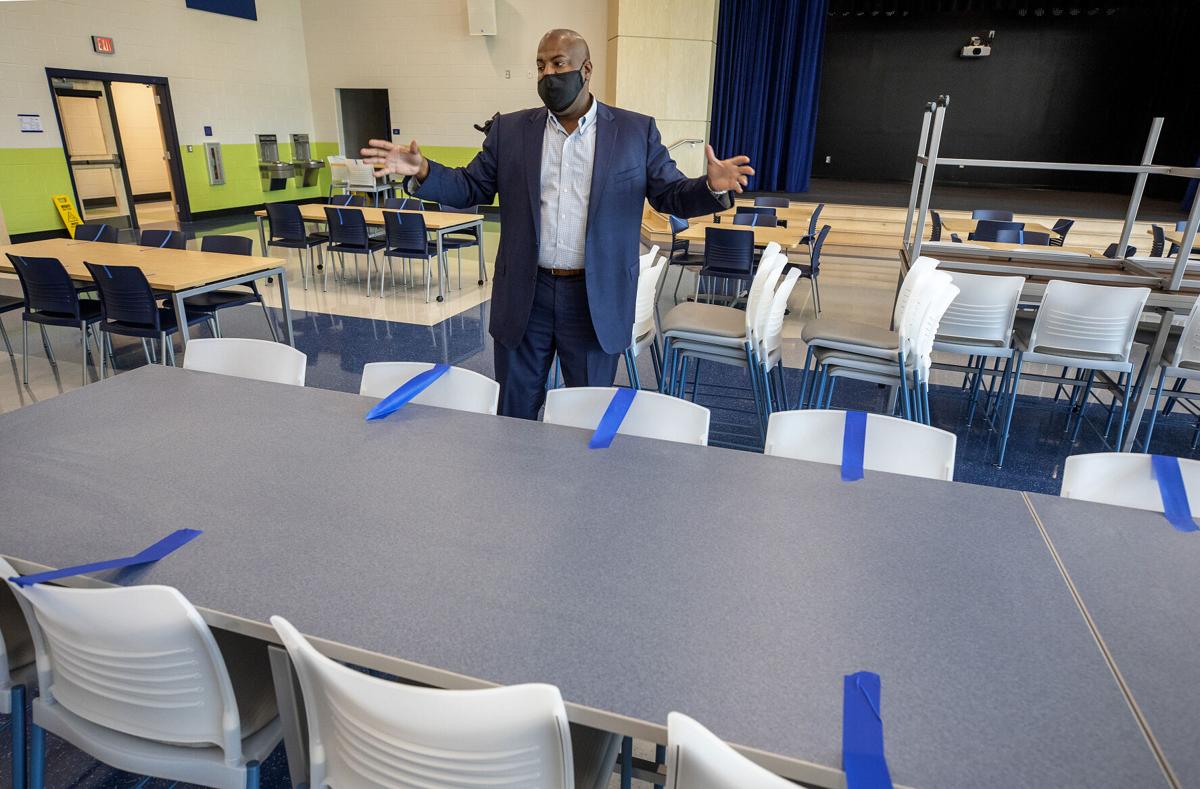 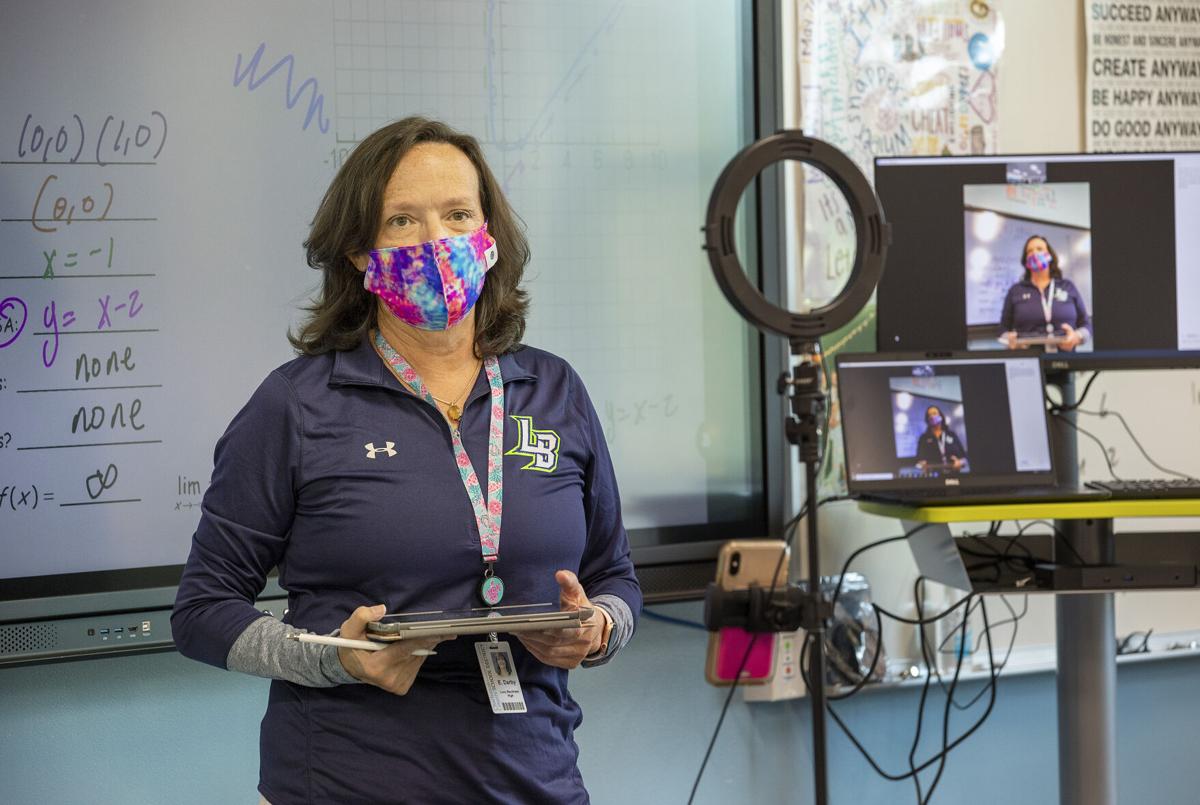 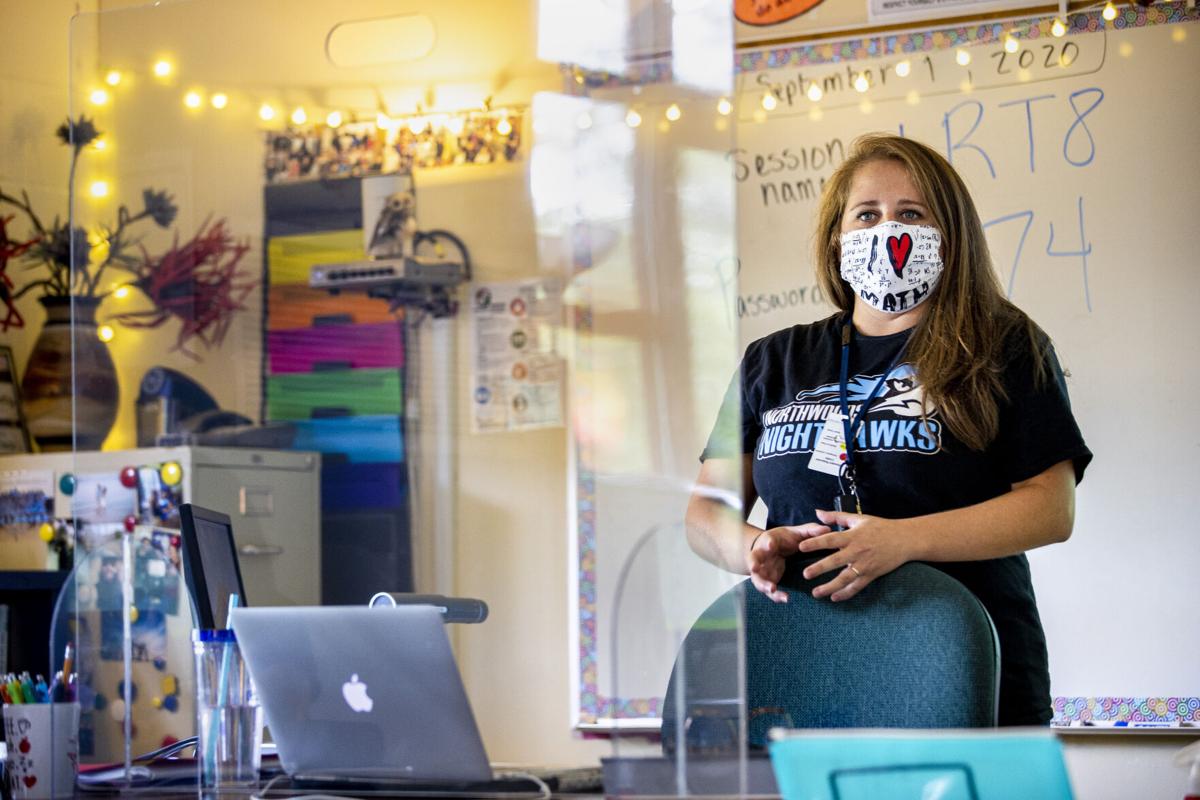 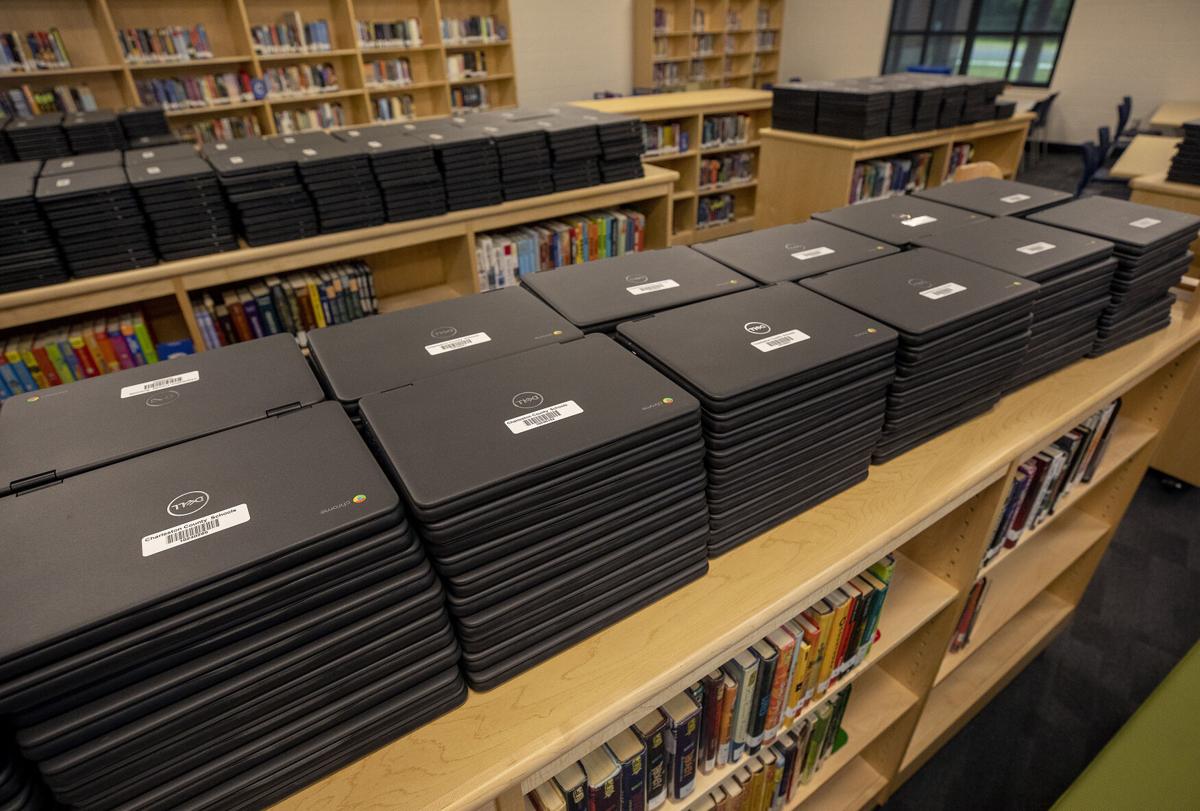 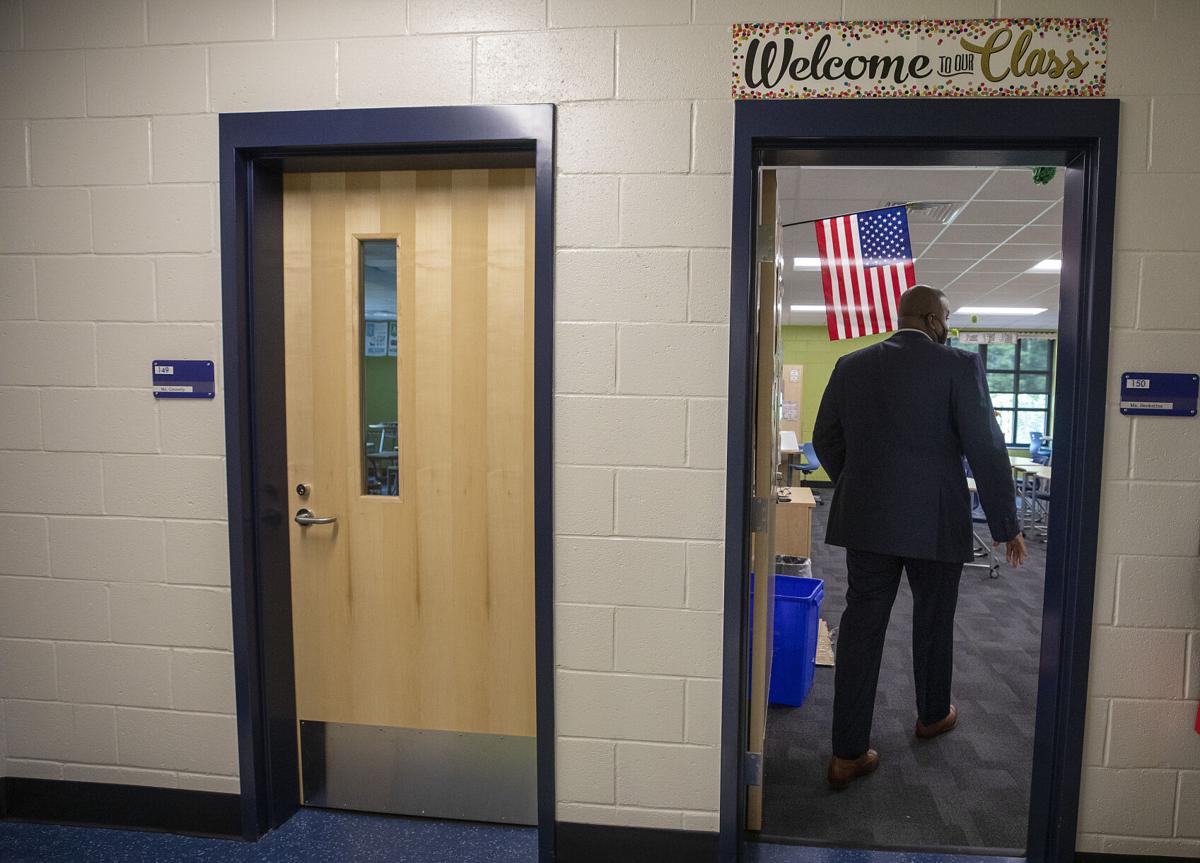 The school year that officially opens Tuesday in 32 districts across South Carolina will be like none other.

Even the after-Labor Day start is something unseen in South Carolina in 28 years.

What learning will look like over the next semester will vary widely district by district — and could change abruptly.

Of the state's 81 school districts, some of which started as early as Aug. 17, just 20 percent offer a full week of in-person instruction from opening day, including Berkeley County.

The 14 starting online-only include several of the state's smallest and most rural, as well as three of the biggest: two surrounding the state's capital and Dorchester 2 in Summerville. The rest offer a weekly mix of in-classroom and online instruction.

State schools chief Molly Spearman is pushing district officials to transition to five days of face-to-face learning as soon as possible, but that's largely their call. And while the state's education and public health agencies have provided safety guidelines, the details are also local decisions.

Exceptions include Spearman's mask mandate. But there are exceptions for that, too.

Here are 10 things to expect:

Classrooms will look much emptier

How they'll look will differ by district, by school (depending on its age and size) and by classroom, depending on grade level. But one thing's certain: They won't look like they did before doors closed in March.

Charleston County's move to install large acrylic sheets between desks and to segment tables as a barrier between students prompted other districts to do the same. Spearman told legislators in July the state agency bought plexiglass in bulk to help other districts "do that, too." Some are putting the three-sided, portable versions on students' and teachers' desks.

Others are forgoing the plastic and separating desks by 6 feet, the magic number for social distancing. For young children, that has required buying individual desks to replace the large tables students sat around. To maximize space, bulky furniture such as bean bag chairs and shelving have been removed. And in kindergarten classrooms, centers for interactive learning may be limited or nonexistent.

Particularly in the primary grades, students will stay in the same classroom throughout the day, including for lunch, when meals will be brought to them.

Schools likely won't allow parents to accompany children to their classrooms. State guidelines call for minimizing guests in the building.

Districts banning all visitors, unless there's an emergency, include Berkeley County.

Don't expect to be invited to any school assembly in the auditorium, gym or cafeteria. Under state recommendations, they shouldn't happen.

Do expect to hold parent-teacher meetings via videoconferencing.

Cleaning will be regimented

Some districts have used federal COVID-19 aid to buy high-tech cleaning gadgets, such as electrostatic sprayers to more quickly clean surfaces. Air scrubbers have been added to school nurse rooms.

Spearman's agency bought enough sprayers, and the tablets that go into them, to take care of disinfecting state-owned school buses. Guidelines call for spraying them down twice daily, after both morning and afternoon routes.

Some districts have installed better filters and UV lights to clean the air as it circulates through air conditioning and heating systems. They're also using fogging machines, which turn disinfectant liquid into a thick mist, for schoolwide deep-cleaning weekly.

Districts that don't have the high-tech devices could soon. Legislators are expected later this month to give Spearman permission to buy an additional $10 million worth of cleaning equipment and supplies to dole out.

SC school nurses, tutoring could be paid for with money intended for summer learning

Spearman has required wearing masks on buses, in schools and at entrances where students are being picked up or dropped off. But her mandate doesn't apply to students seated at their desks. Protocol on student mask use in the classroom is up to the teacher and principal.

Students with special needs may be exempt altogether, depending on their disability.

Her agency bought 400,000 masks to supply five for every teacher, cafeteria worker, bus driver and janitor. More will likely be bought as part of that $10 million request.

Berkeley County initially flouted Spearman's mandate by instead encouraging face coverings. The district updated its policy to require them on school buses after The Post and Courier inquired about it.

On Friday, its website still only encouraged masks inside schools. But Spearman expects that will also change before Tuesday. Berkeley County was the only district with policies not adhering to the mandate, said her spokesman, Ryan Brown.

Parents who have a problem with their children wearing a mask should keep them at home in the all-virtual option, Spearman has said repeatedly.

The agency will get involved only when it's notified people are purposely disregarding protocols, Katie Nilges, the agency's legislative liaison, recently told senators.

Check online for cases at your school

The state Department of Health and Environmental Control has provided schools with three template letters — one to distribute when someone in the school was diagnosed with COVID-19 but not in their child's classroom; one for when a student or employee in their classroom tests positive but wasn't considered a close contact; and one for when their child must stay home.

The school, not DHEC, is responsible for sending those letters.

Charleston County plans to notify parents when their child is identified as a close contact and limit broader, school-level notification only if it's deemed necessary because of an outbreak.

Check DHEC's website, at scdhec.gov/COVID19schools, for what's happening in schools statewide, public and private. On Friday, it began reporting COVID-19 cases by school, with a breakdown by students and staff.

The data, to be updated twice weekly, will include only those physically in the school, not students taking classes fully online or teachers working remotely. The reporting doesn't necessarily mean the virus was contracted at the school.

There are no plans for widespread COVID-19 testing

DHEC officials have repeatedly advised against testing all K-12 students or teachers, whether as a qualifier for entry or through blanket, periodic screening.

For one thing, it's a resource issue. South Carolina, and other states, already have problems with lab backlogs and limited supplies that have delayed test results by a week or longer. Since March, 1 million South Carolinians have been tested. The largest number reported by DHEC for any single day was 16,339. Trying to add hundreds of thousands of students statewide in bulk into the pipeline is just not doable.

And, as officials point out, it's a moment-in-time test. A student could test negative for the precise moment the test was taken and get infected shortly thereafter.

If there is an outbreak at a school, that's different, she said.

DHEC also doesn't recommend routine temperature screenings, saying it's up to parents to monitor their children at home, and keep them there, if they're showing symptoms.

Local schools in SC will decide how to handle COVID-19 outbreaks. So what's the plan?

Unlike the spring, attendance will be taken

When schools closed in March, districts across the state implemented "do no harm" grading policies, meaning students passed whether they did any work or not. Once students figured that out, many stopped checking in.

Spearman has repeatedly assured legislators expectations are much different this fall.

For starters, "attendance will be taken every day," even for students learning online, she said.

Teachers can see if a student hasn't logged in. Normal truancy rules should apply, so students offline and not otherwise heard from for three consecutive school days should be receiving a knock on their door.

Grading should largely be back to normal, recognizing gaps in internet access remain. And the state grading policy allows "reasonable flexibility" for students facing hardships, even in years they're not contending with a pandemic.

The arts can continue, but with restrictions

The state's public health agency asked schools to "consider" suspending all musical practices and performances that involve singing or playing instruments that involve blowing air through them, such as a flute, clarinet and saxophone.

But if the music goes on, students should be spaced more than 6 feet apart. They shouldn't share mouthpieces, and shared instruments should be disinfected between each use.

How that's handled will vary. At Northwoods Middle School in North Charleston, students in band and chorus classes will concentrate on learning musical theory for the first nine weeks, rather than actually making music.

"There's going to be less instruments in class," she said. "The instrument part will be more virtual, so that they can actually blow into their instrument or sing a note right without having to worry about their mask."

Charleston County students who are practicing in the same room will spread out and wear "musician masks" with a slit that lets them play an instrument while still covering up.

Covers will also go over the bell portion of brass instruments, such as trumpets and French horns. Plus, students who must push a lot of air through their instrument are supposed to stay at least 10 feet apart, said Denisse Santos, the district's visual and performing arts coordinator.

The district has banned choir students from singing indoors. If they practice outdoors, they should space out and wear masks, she said.

There are playground restrictions

Children are supposed to socially distance during recess and physical education classes, too.

To help with that, outdoor breaks will be more organized. In Greenville County, at least, that will include yoga lessons. And only one class at a time may be allowed on the playground.

Students won't be "playing together on the same playground equipment at the same time," said Andy Pruitt, spokesman for Charleston County schools. "It's going to be spaced-out activity."

State guidelines say it's OK to play sports in P.E. classes, but preferably outdoors and with students spread 6 feet apart. Otherwise, masks are recommended, even outside.

One of the most difficult things for teachers, especially in the primary grades, is being told they can't hug their students.

Under state guidelines, if a teacher feels compelled to console a crying child, "it is best" if both are wearing a mask and eye protection. And even then, the teacher is asked to "limit the duration of the close contact."