In this screenshot of court proceedings on Wednesday, Jan. 13, 2021, S.C. Supreme Court Chief Justice Donald W. Beatty listens to oral arguments in a case that challenges the constitutionality of the state's civil asset forfeiture laws. 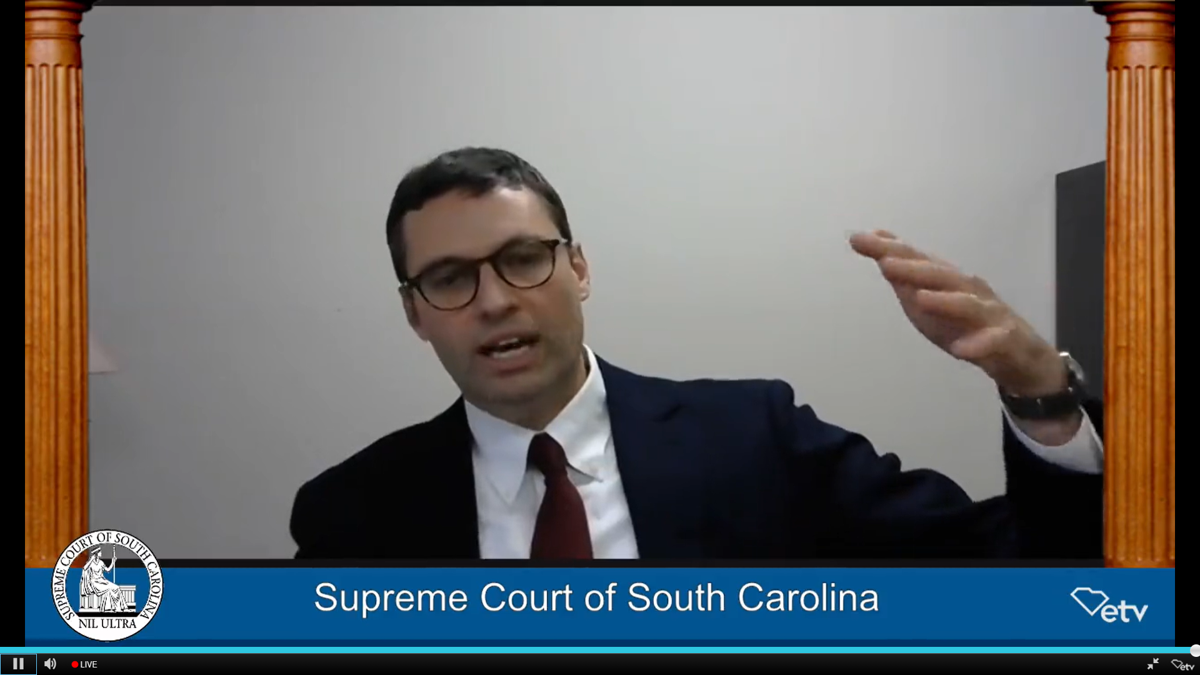 Attorney James Battle of Conway argues a civil asset forfeiture appeal in front of the S.C. Supreme Court on behalf of the 15th Circuit Solicitor's Office in Horry and Georgetown counties in this screenshot of court proceedings on Wednesday, Jan. 13, 2021.

State Supreme Court justices pressed an attorney defending South Carolina's civil asset forfeiture law with dozens of questions on Wednesday about the practice's legitimacy, the timing of cases being resolved, and whether the state’s system of seizure and forfeiture leads to frequent abuses by police.

The justices, in a hearing nearly a half-hour longer than the 30 minutes scheduled, asked whether defendants who have had property seized by police receive due process. They questioned whether solicitors delay filing cases because state law says cases must be filed within a “reasonable” time.

And behind several questions was the understanding that in South Carolina a successful forfeiture means police and prosecutors keep 95 percent of the value of the seized assets.

The case being argued involved a convicted Myrtle Beach drug dealer. It pits the 15th Circuit Solicitor’s Office against the nearly $20,000 seized in 2017 from Travis Lee Green. The challenge to the law arose after 15th Circuit Court Judge Stephen John placed a stay on all forfeiture cases in the circuit following a U.S. Supreme Court ruling that the U.S. Constitution’s prohibition on excessive fees and fines applied to the states.

Seeking to overturn the stay, the solicitor’s office appealed using the Green case. John asked attorneys to provide briefs on the constitutionality of forfeiture in the state. He then ruled the state’s forfeiture laws violate both the state and U.S. constitutions.

The case was appealed directly to the Supreme Court and has attracted the attention of S.C. Attorney General Alan Wilson, who backed the solicitor, as well as national groups intent on changing the use of forfeiture, among them the American Civil Liberties Union, the Buckeye Institute and Americans for Prosperity.

James Battle, a Conway attorney, represented the 15th Circuit Solicitor in a hearing held virtually due to the coronavirus pandemic.

Justices questioned whether due process is truly afforded to defendants who have had money or property seized by police.

State law allows police to seize property or cash thought to be used in a crime and hold it until a forfeiture case is resolved. Solicitors can wait two years or more to file a case, and defendants have no recourse other than to sue the police to try to get their property returned.

Far more often, defendants give up or try to make a deal to split the proceeds with the police.

“Wouldn’t you agree that the application of our forfeiture statute, I’m talking generally about application of the statute, has resulted in abuses, disproportionate forfeitures and is a legitimate cause for concern?” Justice John W. Kittredge said.

Battle started to answer, and Kittredge said, “I don’t want you to answer the question by filibuster, and I think you just answered because you’re not willing to acknowledge that the application of our forfeiture statutes in South Carolina have resulted in abuses.”

Kittredge said he hoped Battle would acknowledge abuses have occurred and need to be corrected in the law.

“If the question is, 'Is the forfeiture law capable of abuse,' the answer is yes,” Battle responded. “Law enforcement absolutely can abuse this statute.”

Kittredge said he was disappointed the court was presented Green’s case when there have been a “significant number” of cases of police abusing forfeiture that haven’t risen to the top court. Attorneys challenging the forfeitures must show the entire law is unconstitutional rather than whether it was applied unconstitutionally.

Robert Frommer, a senior attorney with the Institute for Justice, argued the text of South Carolina’s law creates abuses and created the profit incentive for police to use forfeitures in an overhanded way.

“It forces people to prove their innocence,” Frommer said. “It doesn’t give them hearings for months, if not years. And that affects everyone in South Carolina, not just Travis Green.”

Frommer said he hopes the court would rule that the entire law is unjust.

Chief Justice Donald Beatty questioned why solicitors, when trying a forfeiture case in civil court, must only prove probable cause since police initially had to show probable cause. Battle said the solicitor must “reaffirm probable cause” to the judge.

Justice Kaye Hearn asked Battle if law enforcement having a financial stake affects how they operate. Battle said it can, but a judge must approve the forfeiture.

“So I guess your answer is, even though it may have been improper on the front end, at the tail end of this process it gets fixed by the court?” Hearn said.

Justice John Few’s line of questions sought to understand whether an agency could obtain a forfeiture ruling from a judge before a criminal case is ever decided. It can happen because the cases are separate and the standard of proof is lower in the civil case than the criminal case, Battle said.

“Your forfeiture action, it seems to me, you’re being relieved of the burden of proving that a crime occurred,” Few said.

The state’s highest court decision looms even as members of the General Assembly have renewed efforts to overhaul the state’s civil asset forfeiture laws.

A bill was prefiled by state Sen. Gerald Malloy, D-Hartsville, while a bipartisan group of House lawmakers spent months crafting a new draft of a bill that nearly passed the House at the end of the 2019 session. Each bill would reform the state’s forfeiture laws, making forfeiture of property incumbent on a criminal conviction in most cases.

A House measure filed on Tuesday says property would be returned to owners if a forfeiture action related to a criminal case isn’t started within 30 days. It would also change the burden of proof from the owner to the seizing agency. It would also send forfeiture hearings for amounts lower than $7,500 to magistrate courts.

But the proposed House bill would leave intact some financial incentives. Law enforcement would still retain the first $1,000 of any forfeiture while the rest would be sent to the prosecuting agency. The bill was referred to the House Judiciary Committee.

The legislative reforms that have been proposed are still inadequate because they contain the same constitutional issues that are being litigated right now, Frommer said.

“They still contain the same profit incentive,” he said.

Frommer said it’s incumbent on the Supreme Court to give the General Assembly guidance on what the constitution does and doesn’t permit.

Beatty asked Battle whether the solicitor’s office ever dismisses criminal cases if a person agrees to forfeit their property.

Battle said he exclusively works the civil cases. He said he expects most criminal cases to move forward even if the defendant agreed to forfeit their property.

“You have no idea how many of those cases are play to prosecute?” Beatty asked. “To be quite frank with you, I don’t believe you, but that’s the end of that.”