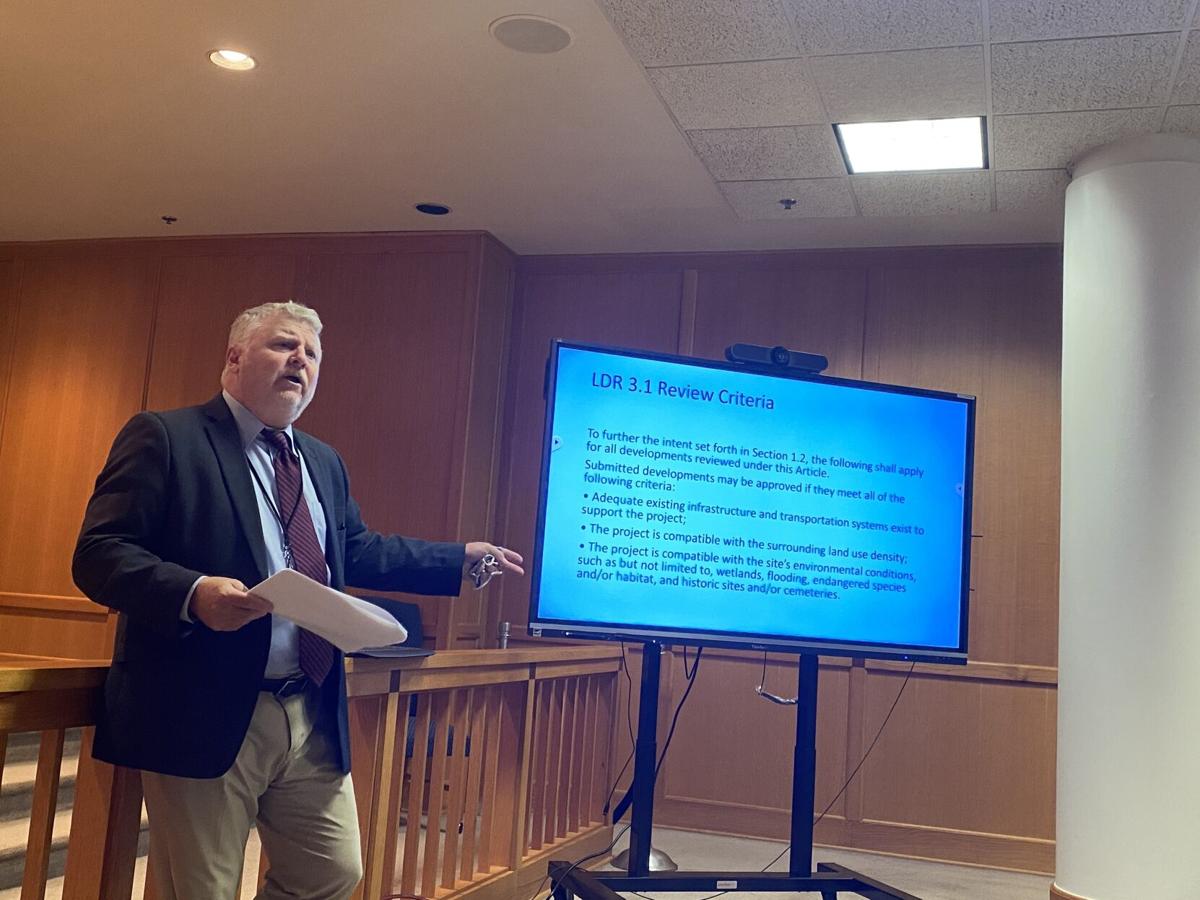 Mark Tollison, Greenville County attorney, makes a presentation about land use and zoning as it relates to Article 3.1 at a community meeting at County Square on May 1, 2021.

At a community meeting designed to generate fresh ideas for replacing Greenville County's embattled Article 3.1 land development regulation, residents in attendance proffered a number of proposals but one clear message — they don’t want County Council to abandon the rule entirely without a replacement.

Speaker after speaker made the point clear.

“We do not want any more mass-graded, high-density subdivisions,” said Jason Wright, who lives on Ridge Road in northern Greenville. He said he spoke on behalf of Blue Ridge and Tigerville residents “to express our displeasure, dislike and even anger ... that Greenville County Council has refused to meet our request for the future of our community.”

“To recklessly repeal Article 3.1 without a replacement would be to invite disaster without proper regard for the protection and safety of our community,” said Roland Pittman, who said his family lives on the same acreage in rural Taylors it has owned since the 1800s.

Eight of the county’s 12 council members attended the meeting, which started at 9 a.m. on May 1 at County Square. It was hastily arranged to give residents a voice in the effort by some council members to replace Article 3.1 instead of repealing it altogether as council chairman Willis Meadows moved to do, citing its role in multiple lawsuits against the county. Councilmembers Ennis Fant, Chris Harrison, Xanthene Norris and Dan Tripp didn’t attend.

Those who did sit through nearly three hours of speakers — each given five minutes to share their thoughts — heard from some who wanted some sort of zoning for the county’s currently unzoned areas, or those who opposed zoning but wanted density rules for subdivisions in unzoned areas.

Nearly all speakers live in the unzoned upper-third and lower-third of the county where mountains, trees and farmland are abundant but the landscape is quickly changing due to development as home builders seek to keep up with the pace of growth in the county.

To zone or not to zone?

Each day on average, 33 people move to Greenville County and that pace of growth is expected to continue through 2040, said Michael Dey, vice president for the Home Builders Association of Greenville. Home builders will need to add 90,000 houses in the county over that span to accommodate the growth, which would add about 220,000 people to the county’s current population of 530,000.

“I’m not here to say you can’t regulate density or intensity of use in the county. You can,” Dey said. “You can order 100-acre lots if you want to. But you need zoning for that. And the problem is 60 percent of our county is unzoned and you’re trying to use the land-use regulations in place of the zoning ordinance.”

Dey said he has studied some options suggested to shore up Article 3.1. In his view, each suggestion regulates density and intensity of use, “which is a function of zoning.”

Residents like Pittman argued against rural zoning. He said it is better left for more urban areas and because if something’s been zoned, it can be rezoned by powerful interests.

A group of residents on the edge of Lake Robinson have been working to zone land that rings the lake to protect it from high density developments like a 300-unit tiny home community that wanted to build nearby. Faulkner, on the board of Friends of Lake Robinson, said the community needs to know if the council can pass an amended Article 3.1 or if rural residents need to count on zoning to save the character of their community.

Whatever happens with the density section of Article 3.1, environmental attorney Frank Holleman continued to advocate for keeping the environmental wording in the article, which states that a project must be compatible with the site’s environmental conditions, including wetlands, flooding, endangered species and habitat, and historic sites and cemeteries.

That portion, he said, has prevented developments where endangered species exist and has not caused any of the lawsuits the county has faced.

Julie Turner, who immersed herself in the rural density issue when a developer proposed a subdivision on 20 acres across from her horse farm, suggested the council could add the concept of a conservation subdivision to its land development regulations.

Those subdivisions could cluster houses on one section of the land while preserving the rest as undeveloped space.

Richard Hubble, who as vice president of real estate development at The Cliffs has helped develop luxury golf communities in the county’s rural northern region, said he agreed with the concept of allowing homes to be clustered on buildable land while conserving other parts of the mountainous area.

The first four speakers May 1 each presented pieces of a plan that a group of residents first suggested in 2019 to replace vague language in Article 3.1 with a concrete formula to regulate density.

Jim Moore, an engineer who organized the zoning of more than 7,000 acres in southern Greenville County, helped draft the proposal and presented it again May 1. In essence, it would use existing density to guide the density allowed for a new subdivision. 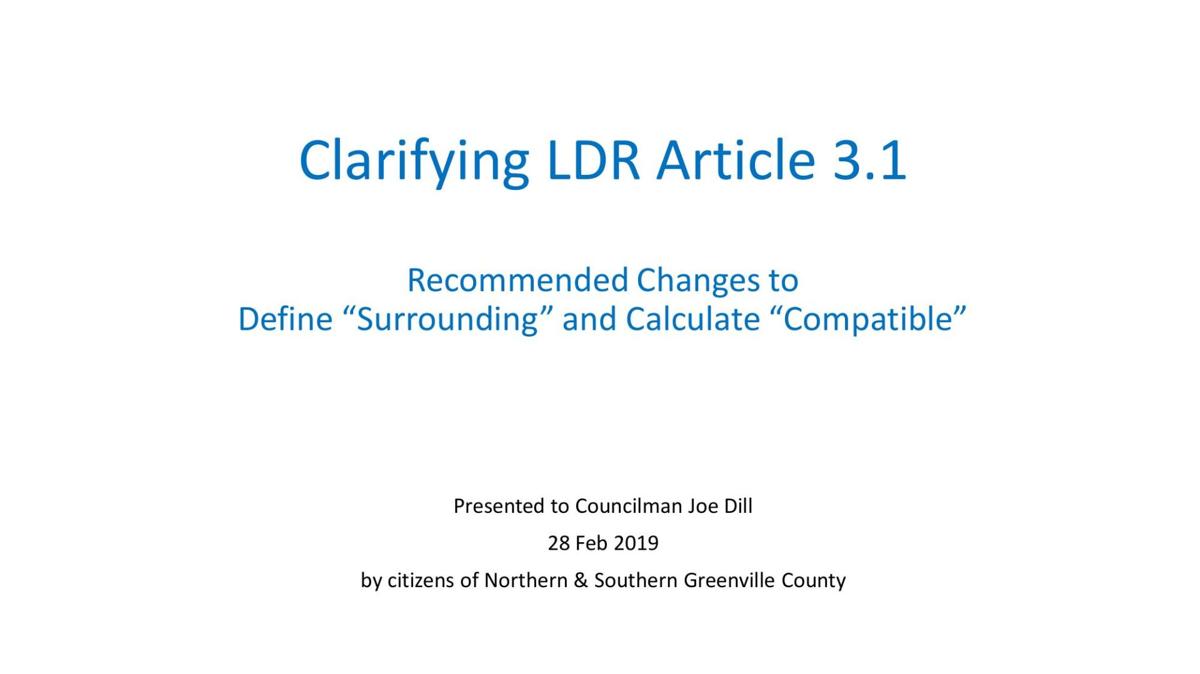 The group modeled the plan using a number of projects that the county approved or denied based on Article 3.1 density and found most of the ones allowed under Article 3.1 would still be allowed under their plan, and those denied would still be denied under this proposal. But, Moore said, the proposal gives a concrete formula to determine compatibility with surrounding land-use density.

Other residents threw out ideas, as well. Ehiler suggested allowing one home per five acres in unzoned areas, a more stringent requirement than even Article 3.1 allows.

Amanda Smith lives in the Sandy Flat community in Taylors where her family has lived for more than 100 years. Though her family historically would be opposed to zoning, she said some may be needed. Rather than zoning land, she suggested that when land changes hands and a subdivision is planned, a developer could be forced to accept new zoning guidelines before they can build.

And, she said, more developers need to do traffic studies in order to build.

“I think it’s fair to ask proposed subdivisions to at least do a traffic study for over 10-plus homes,” she said.

Plan for 481 homes on Old Grove Road moves ahead, with Greenville council split on the issue

Some residents said they were fine with keeping Article 3.1 in place as is and continuing to fight lawsuits.

Moore suggested traffic studies should be done for projects with more than 35 homes and said many of the state’s other growing counties require them at that level. Greenville County requires one when a subdivision hits 90 homes, he said.

The density language in Article 3.1 isn’t the only issue with the county’s land development regulation, Moore said. Before Article 3.1 was existed, Moore and other rural landowners sued to stop the Copperleaf subdivision from building in their rural southern Greenville area. They cited infrastructure concerns — road impacts in particular — rather than density.

That lawsuit is still pending but an appeals court has ruled residents do have standing to sue in those cases. If Article 3.1 is repealed rather than replaced, Moore said, residents may continue to bring lawsuits based on inadequate infrastructure.