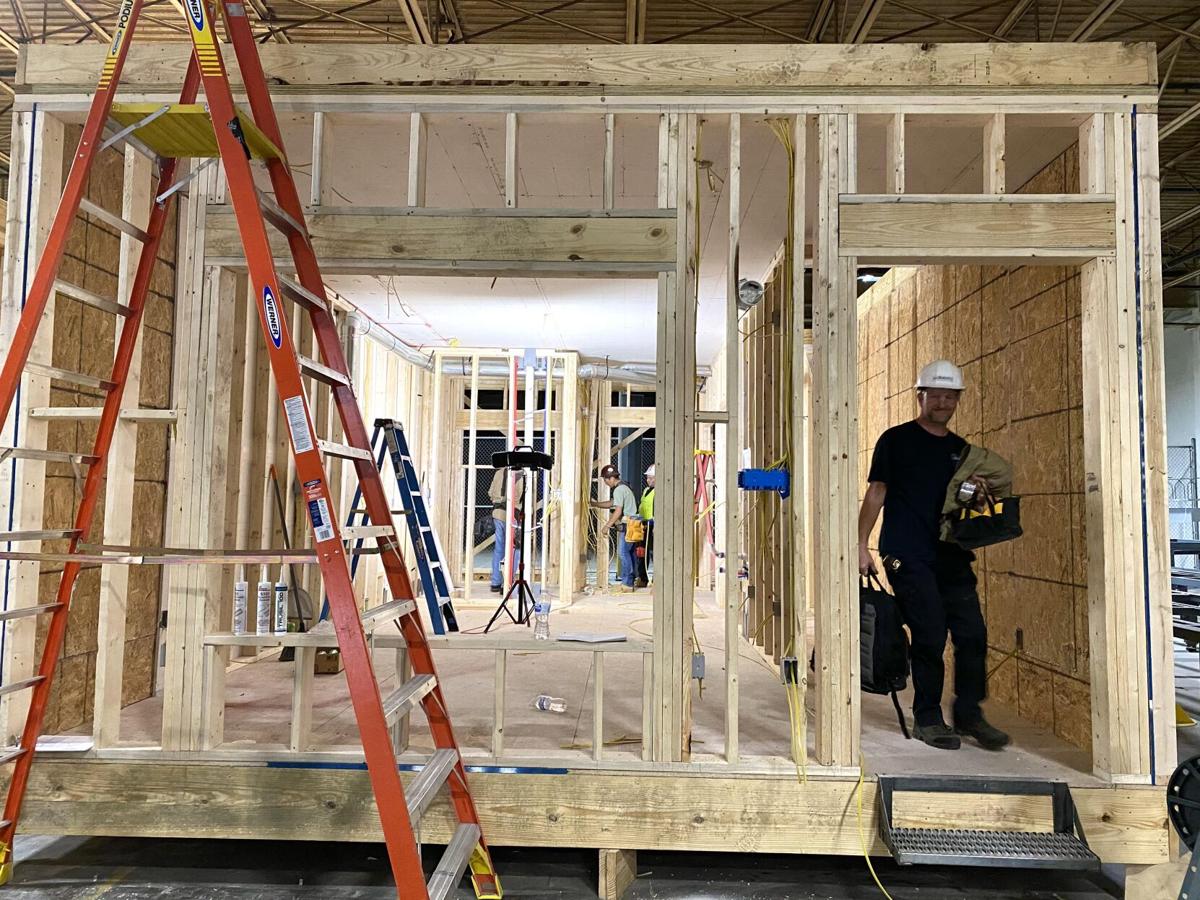 BMarko's off-site construction method prevents construction workers from having to work in rain or extreme heat or cold. 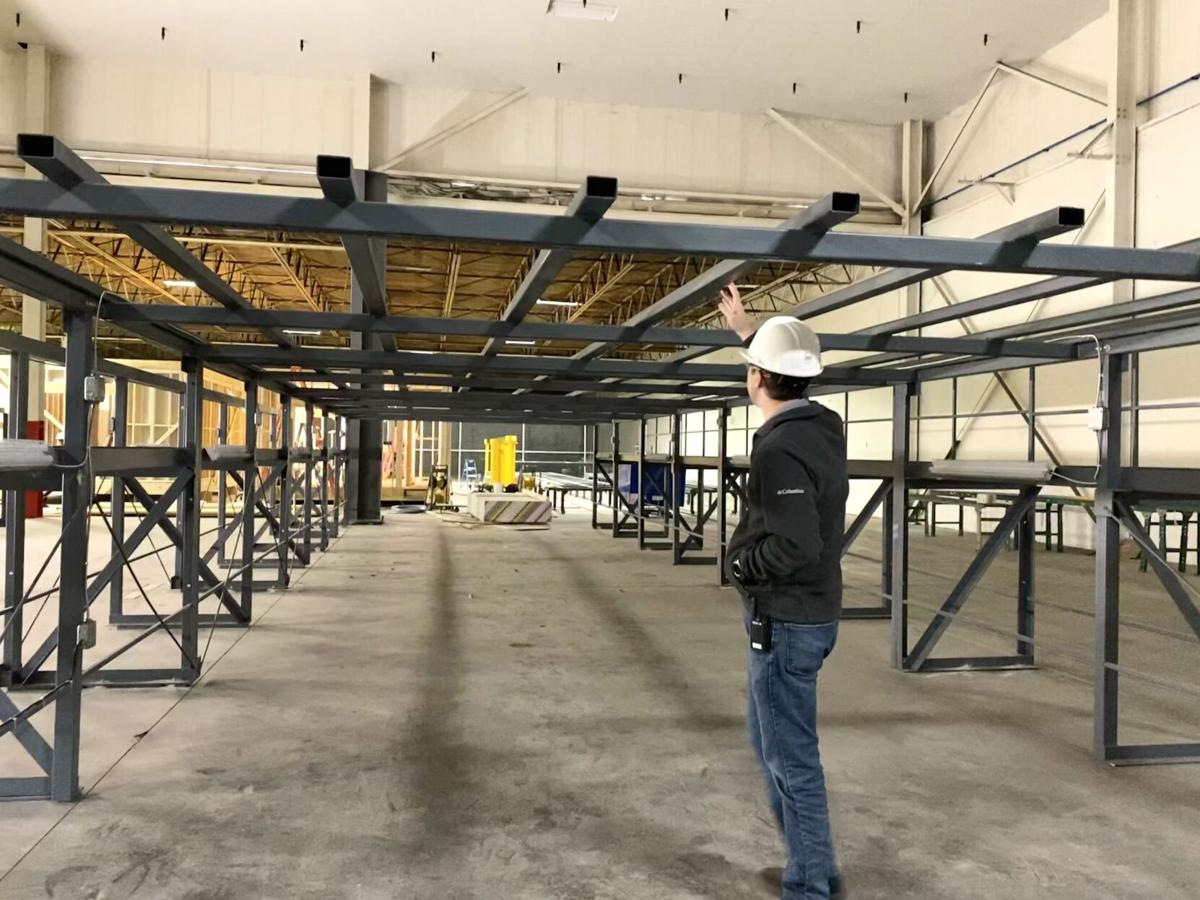 Ceilings can be kept at ground level for safety in the BMarko warehouse until ready to be lifted by a crane. 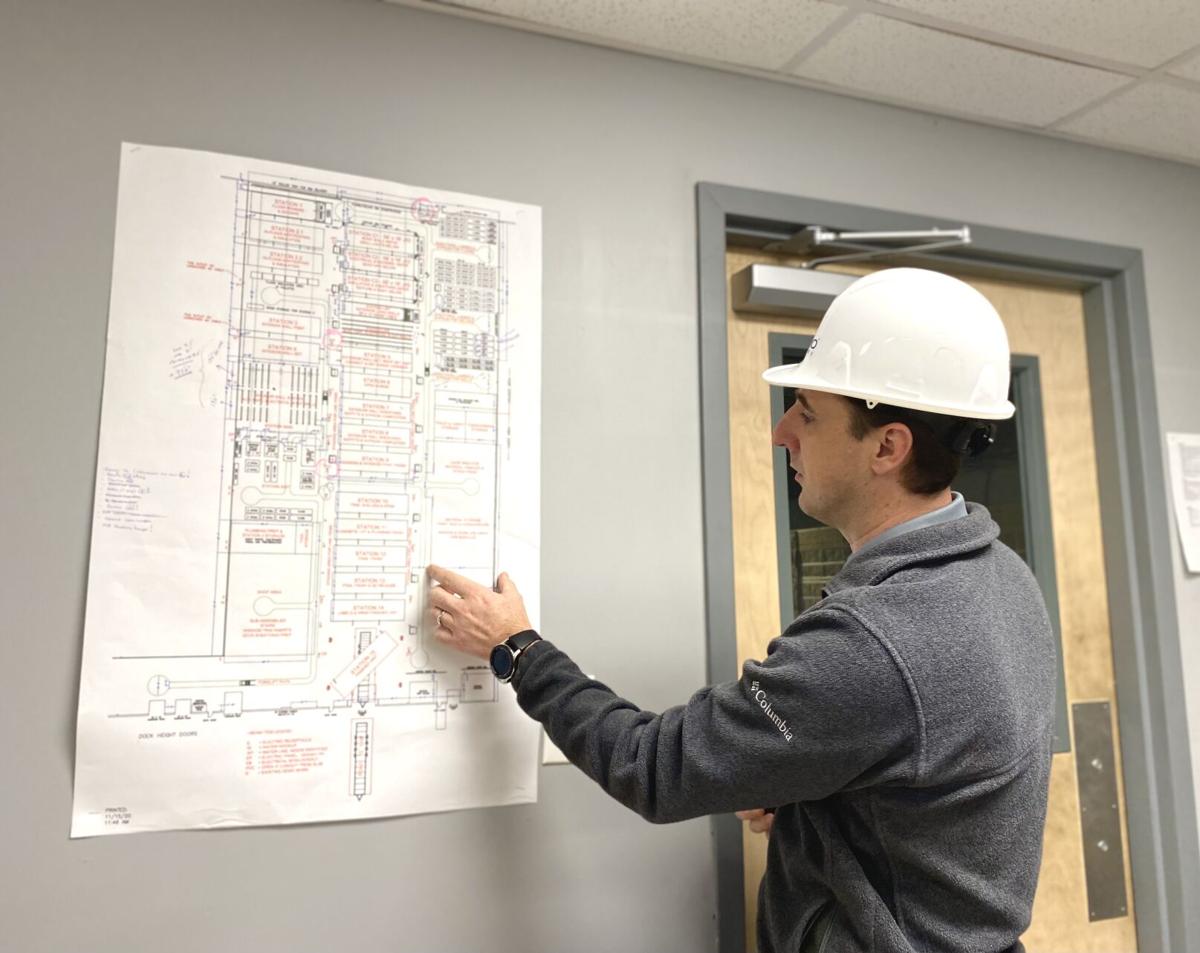 Ben Silewicz, VP of Growth at BMarko in Greenville, shows an organization chart for the 15-step assembly line. 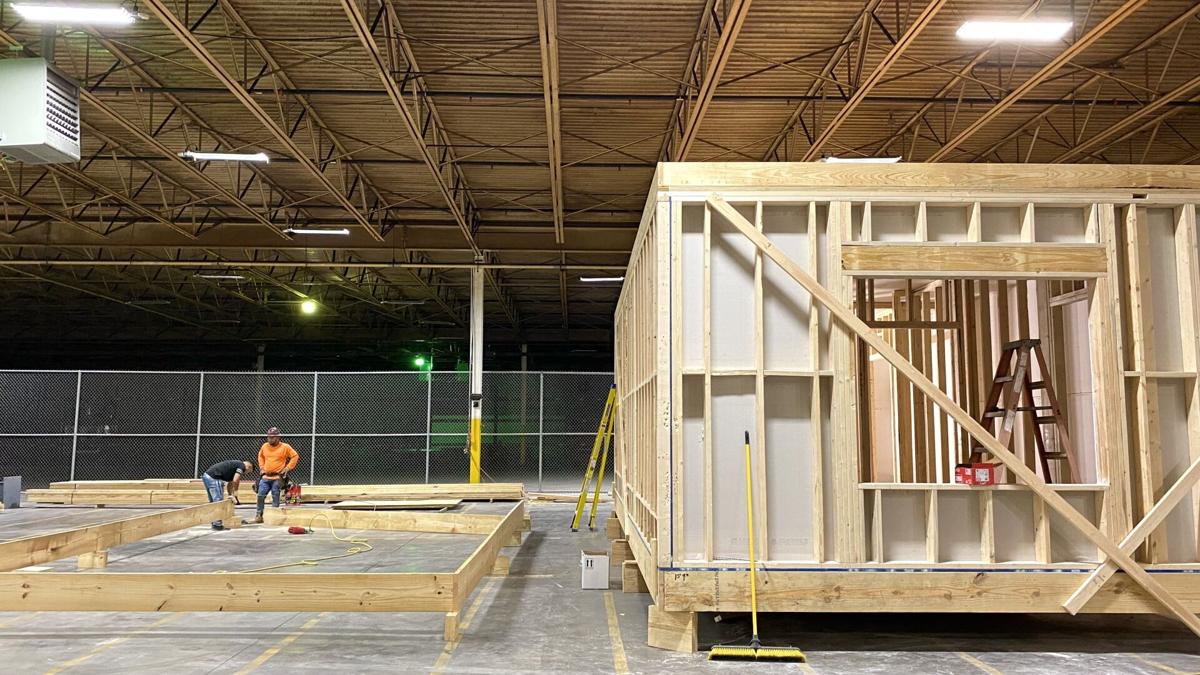 On the left, an apartment unit is just getting started. On the right, a unit is well into the process. 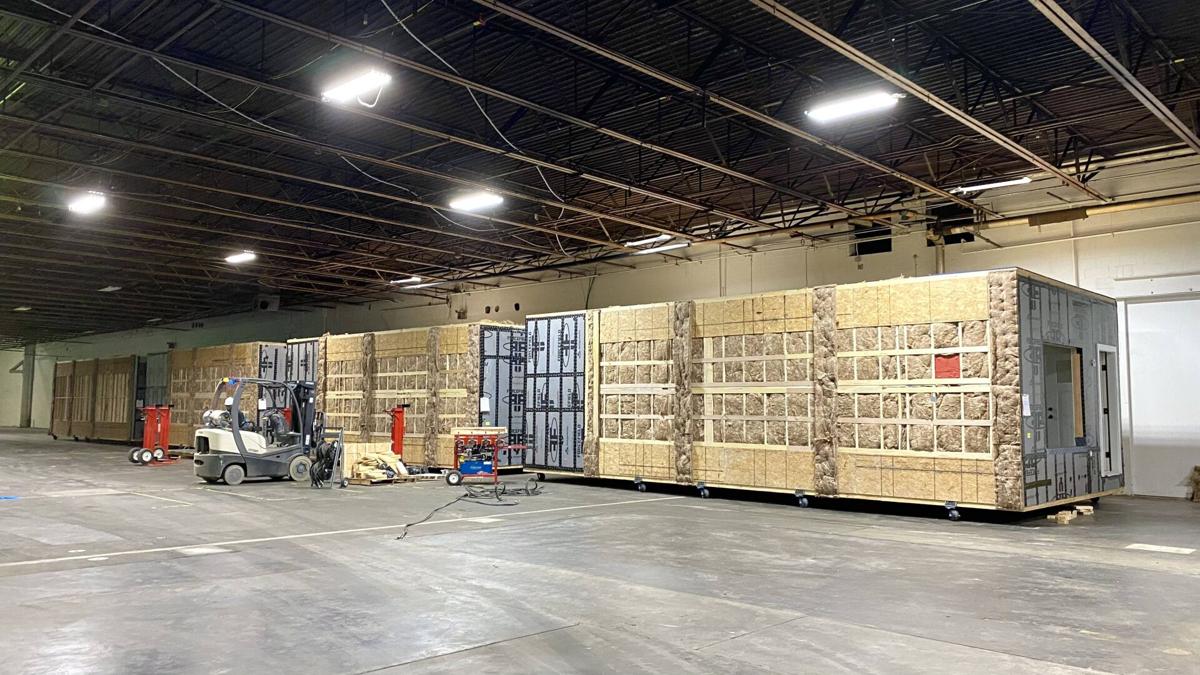 BMarko's completed units are lined up against the wall, ready to be transported to their Spartanburg location.

BMarko's off-site construction method prevents construction workers from having to work in rain or extreme heat or cold.

BMarko's completed units are lined up against the wall, ready to be transported to their Spartanburg location.

An Atlanta-based builder that assembles homes off-site to speed construction has set up shop in a Greenville warehouse.

It plans to stay as long as there is a market for its product within 100 miles.

BMarko builds repeatable units — typically apartments — in a warehouse and then transports them to a physical site, where they are stacked together like Legos. With construction tucked away indoors, BMarko cuts a low profile.

“We will finish a project and a city will say they didn’t even notice because we didn’t have dumpsters, muddy roads, traffic congestion and noise complaints,” said Antony Kountouris, who helped start BMarko in 2014. “It’s painless.”

The modular construction market in the U.S. is estimated at $27.5 billion, according to Industry Analysts, Inc. It has been around for decades but is becoming more popular and could hit $130 billion by 2027 for new construction projects alone, according to a report by the consulting firm McKinsey and Company.

A key attraction for developers is time. Using the modular method can cut a project’s timeline by 30 to 50 percent and could lead to annual savings of $22 billion across the U.S., according to the same report. BMarko, which does more than $4 million in sales a year, has never delivered a project late, Kountouris said. He signs off his emails with the phrase “100% on time.”

The speed of modular building is what attracted AMS Construction president Matthew Summers, who brought BMarko to Greenville to build a 190-unit affordable housing development in Spartanburg. BMarko’s strategy is to find warehouses near a project so it can easily use cranes to transport units for installation.

BMarko is building units in a warehouse now while AMS Construction grades the site and prepares utilities, roads and foundations, Summers said. In traditional on-site construction, a contractor can’t begin building the units until a large portion of site work is complete.

Summers also used modular construction to build Robert Smalls at Midtowne Heights in Spartanburg, which is also 190 units. He estimates it condensed the schedule by six to eight months.

“We’re beating the old model because we are physically constructing the building in a factory and all we need to do is stack and connect the parts in the field,” he said. “We’re executing the two biggest, most important construction activities simultaneously.”

Summers said an important part of the assembly method is the heavy use of machinery, which cuts down on human error.

“Machines are doing the measuring and cutting as opposed to a man in the field with a tape measure and a circular saw who may or may not be working in the rain, or a heat wave, or a snowstorm,” he said.

Completing 90 percent of the work in a warehouse reduces weather delays. It also keeps the workers relatively comfortable and safe.

“We want workers out there to know there are other ways to contribute to building homes,” Kountouris said. “It doesn’t have to be that hard. You can use human toilets here and work with six inches of concrete under your feet.”

Off-site building also allows for an assembly line approach. BMarko’s Greenville warehouse is organized by function into 15 stations, which means up to 15 apartments can be worked on at one time.

The team finished its first apartment within 30 days of opening on December 16.

BMarko, which has worked with Marriott, Coca Cola and Georgia Tech, considers its location in Atlanta to be the mothership factory. For all projects outside of Atlanta, it will build a web of temporary warehouses.

The Greenville warehouse on Laurens Road currently has 30 to 40 workers and the company wants 80, said Tommy Rakes, President of BMarko Structures Wood Modular Division. Because projects are completed faster, there is an opportunity to make more money compared to on-site work. The team works on one project at a time. It estimates the current affordable housing project will be done in October and it has interest from six to seven other developers for the next job.

“If you’re in modular building, you better make sure the Lego blocks line up,” Rakes said.

Tim Sams of Sams Plumbing Service, based in Greenville, said he has seen the heightened quality control first hand, having worked on both modular construction projects and on-site. There is an inspector present at all times on modular projects, he said.

“A lot of time contractors can cut corners but not in this environment,” he said.

Modular building is more convenient, Sams said. The on-site inspectors are useful because they can answer any questions and approve changes immediately. They have all plumbing materials on site and the assembly method allows him to work without holding up other contractors.

Sams, who has been in plumbing for 20 years, said modular projects are still a small percentage of his work but he hopes they catch on.

“I think companies haven’t realized the advantages of it,” he said.

Close to 300 new homes proposed in Simpsonville across several developments