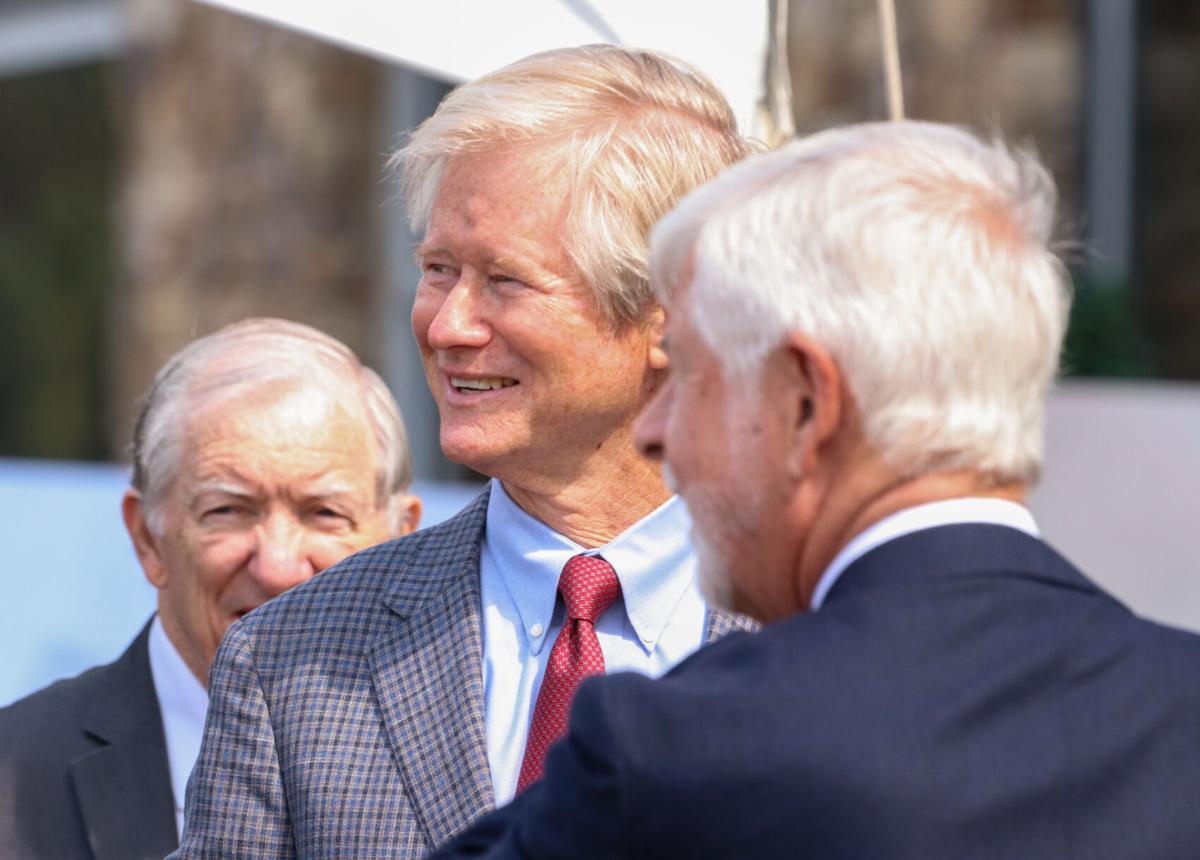 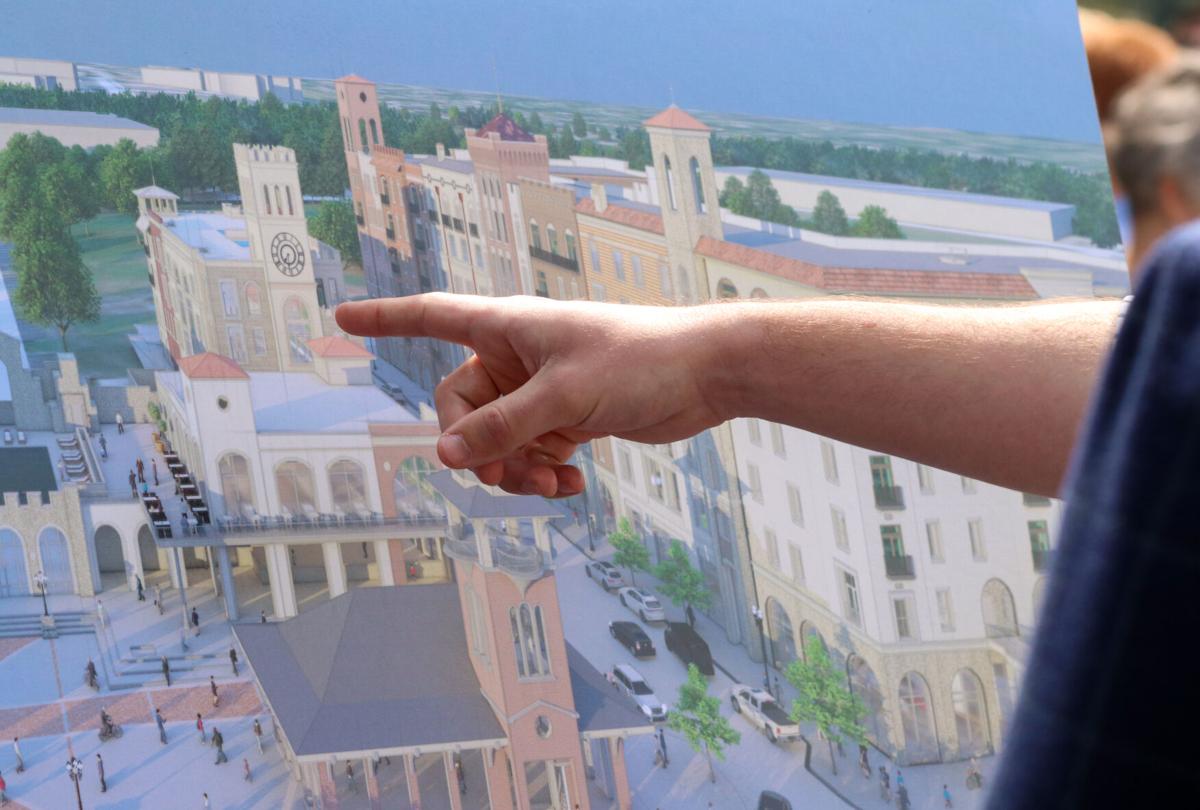 Placards show the plans for BridgeWay Station in Mauldin during an official groundbreaking on April 8, 2021. 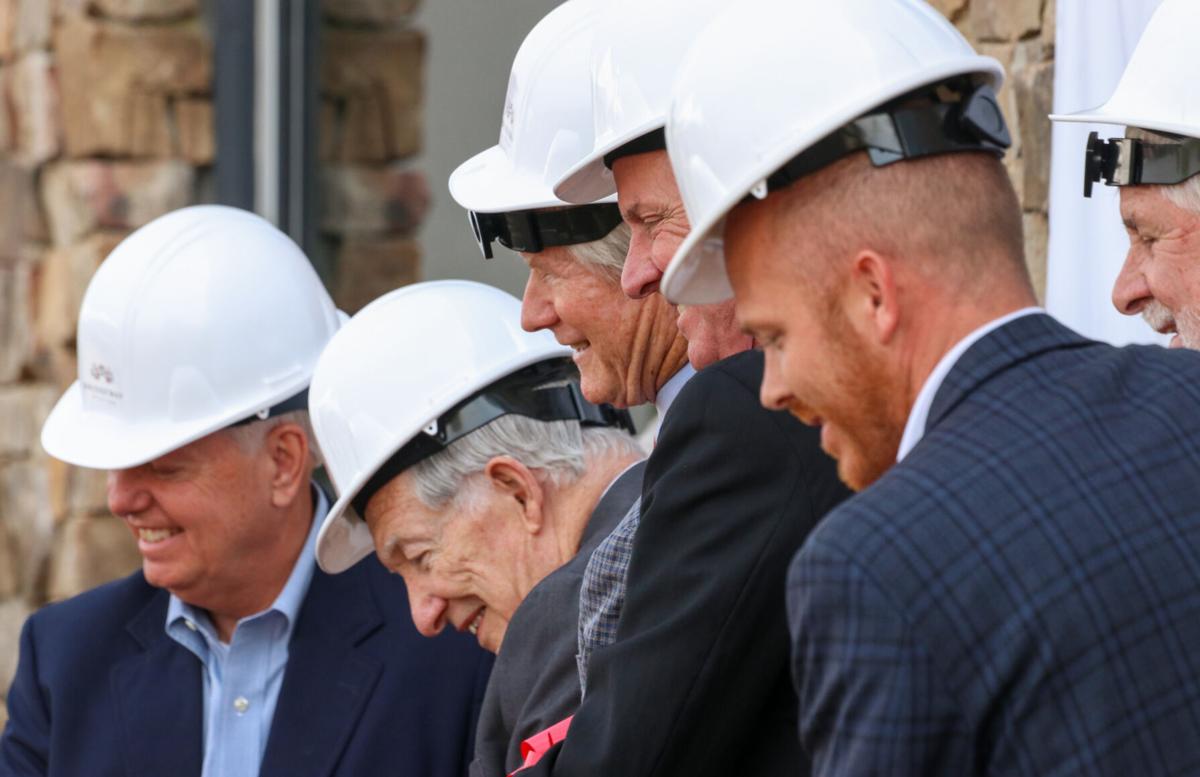 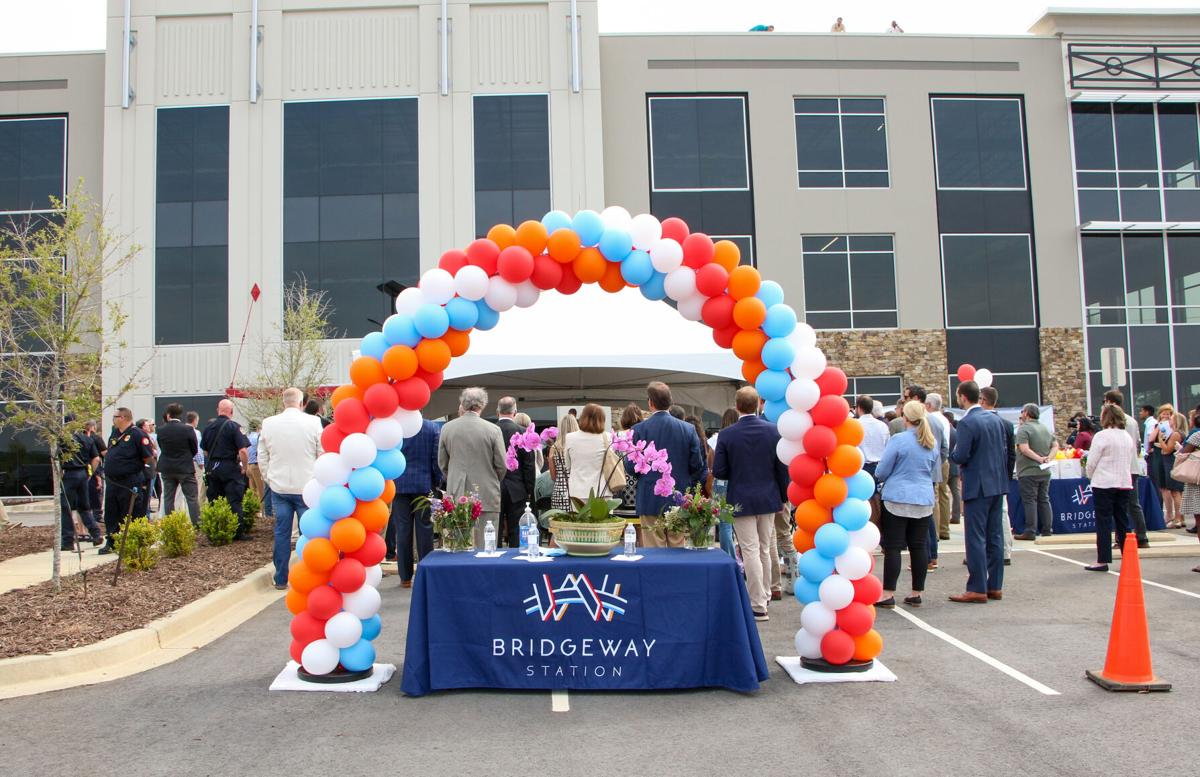 A groundbreaking ceremony for BridgeWay Station in Mauldin was held April 8, 2021. 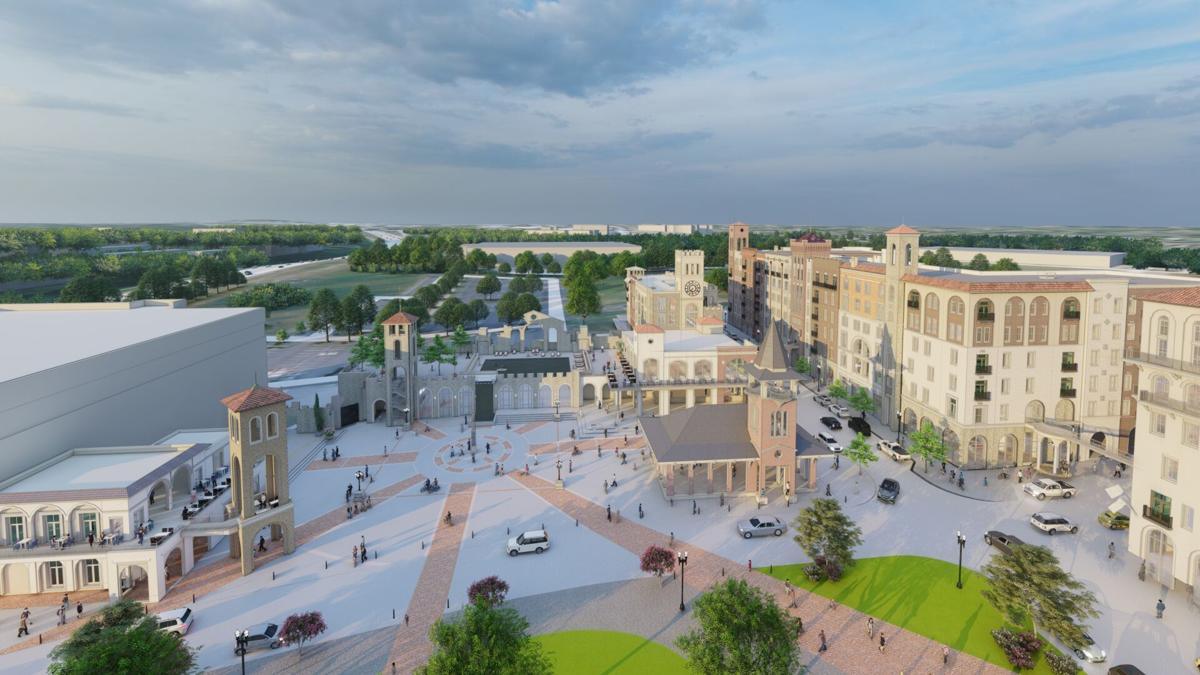 The design concept for the project hearkens back to a time when Hughes lived in Italy. It will feature a central piazza, surrounded by stone and brick facades fronting retail and restaurants, many with apartments or condominiums above.

Hughes also unveiled what will be the most visible feature of the site — a footbridge over I-385 that will become part of the Swamp Rabbit Trail network and connect BridgeWay Station to Mauldin along Butler Road.

The bridge, with brick and decorative concrete columns, carries an estimated $5 million price tag and was key for Mauldin to attract the project and tie it into the trail expansion network. The trail spur is planned to stretch from Mauldin’s city core east to BridgeWay Station and north along Laurens Road to Greenville.

A groundbreaking was planned exactly a year ago but was delayed due to the coronavirus pandemic. Work continued, however, to level the site and to build the network of utilities underground to support the project.

Hughes called the project the culmination of 38 years of planning and work since he first bought at the site about 10 miles south of Greenville’s Main Street. In that time, he developed significant projects that helped foster Greenville’s growth as a destination, including RiverPlace, Rivers Edge, Falls Park Place and Poinsett Plaza.

Now, he has turned his attention to a populous and growing area of the county where the average household income within five miles exceeds $100,000, according to Hughes Investments, his development company.

Gov. Henry McMaster, Sen. Lindsey Graham, Rep. William Timmons, Greenville County Council Chairman Willis Meadows and Mauldin Mayor Terry Merritt each spoke at the event, held outside under tents at one of the office buildings pre-built as a backbone to the project.

Nearly four decades ago, Hughes planned to turn the site into an industrial complex, but a sewer moratorium prevented it. He developed a few buildings and sold off one piece of land to become the Charter Spectrum building, but held the rest until now.

“We like to joke, Charleston is living on its history, the Upstate is making its history,” Hughes said. “We very well may be in the best region of the best state of the best country in the world. And this might be the best place to be — 3,000 feet along I-385.”

Hughes said he wanted to focus his development on beauty, what he called a lost part of many developments today.

“We think we’ve found a new way of construction that can give the authentic real look of an older village and yet serve the modern needs of most every kind of use there is,” he said. He called the project “an entire town” with retail, restaurants, entertainment, institutions and outdoor events at a piazza with an outdoor stage for performing arts.

The design took elements from Greenville’s past — the Wyche Pavilion on the Reedy River, the old Greenville City Hall and old train station, the old Furman Bell Tower — and combined it with a plaza designed after Saint Peter’s Square in the Vatican.

McMaster said the development is another reminder of the business-minded approach he took during the pandemic. The state saw a higher new business investment in 2020 than the year before. That approach, McMaster said, has South Carolina poised to bounce back more quickly than most other states.

“We’re in a position to launch,” he said.

Mauldin Mayor Terry Merritt called it a community changing project that will be inspirational and timeless.

“This project will become an iconic, landmark destination that will have regional implications to the entirety of the Upstate,” Merritt said.

Meadows said the project would transform Mauldin and shows what can happen when government bodies work together.

Eventually, the project may exceed 2.5 million square feet of development on 80 acres.

The city of Mauldin has already approved the initial concept and will give individual attention to sections of the project as different phases are built, said David Dyrhaug, Mauldin’s business and development director. The city and Hughes have also submitted the pedestrian bridge design to the state Department of Transportation and are awaiting final approval, Dyrhaug said.