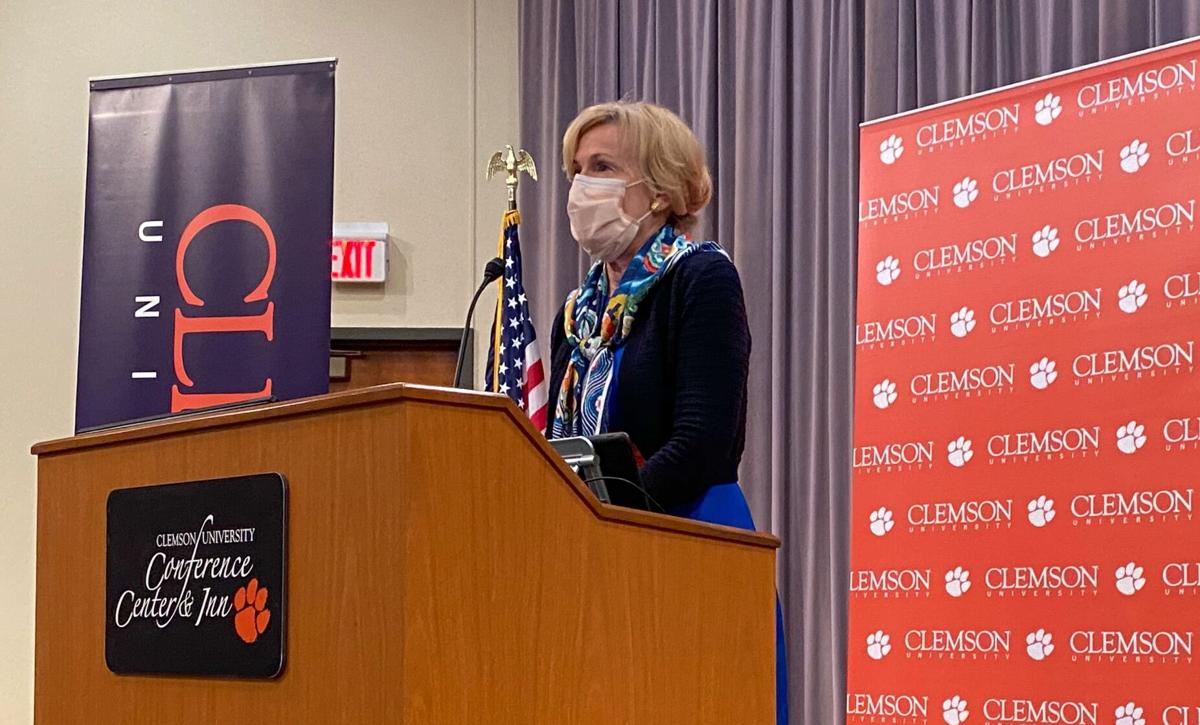 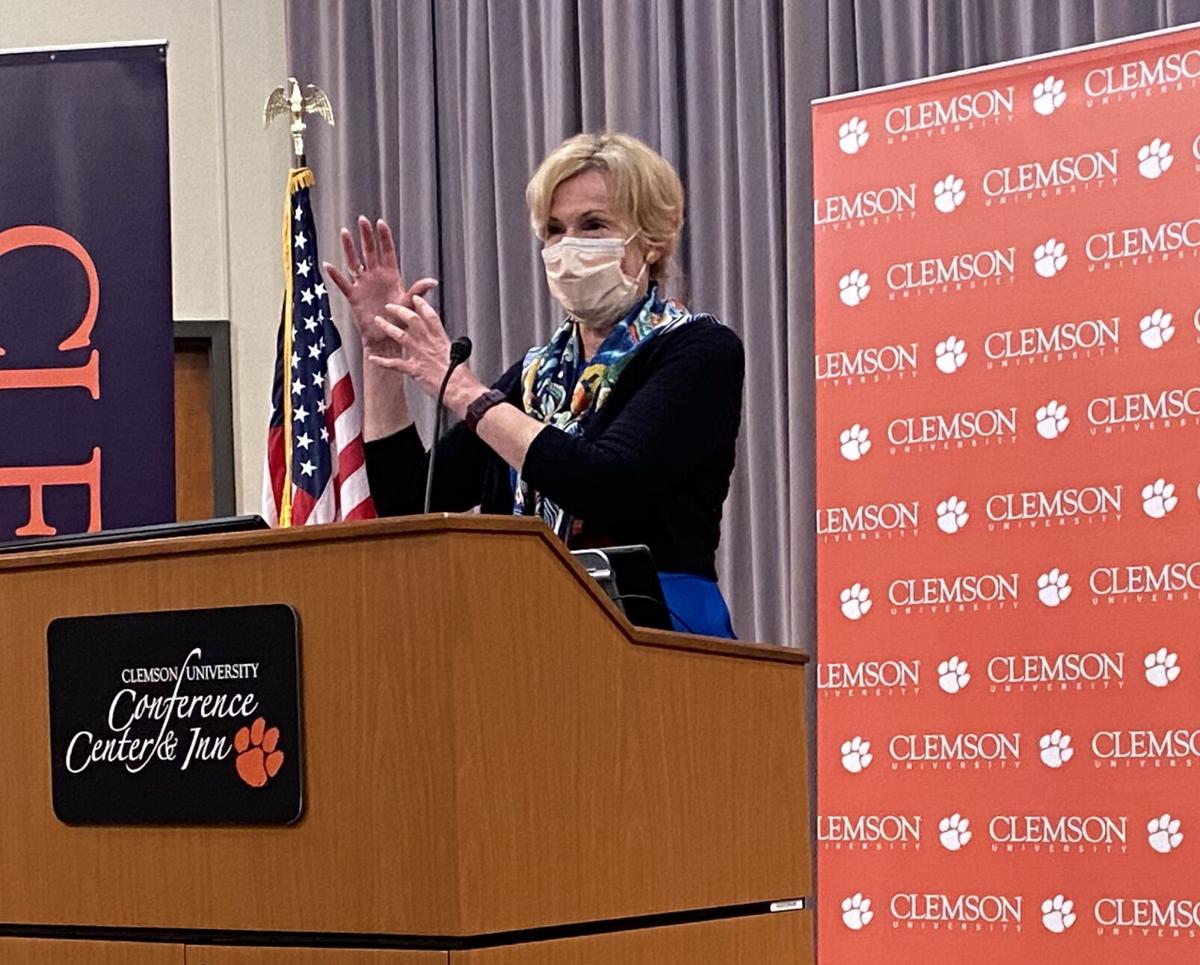 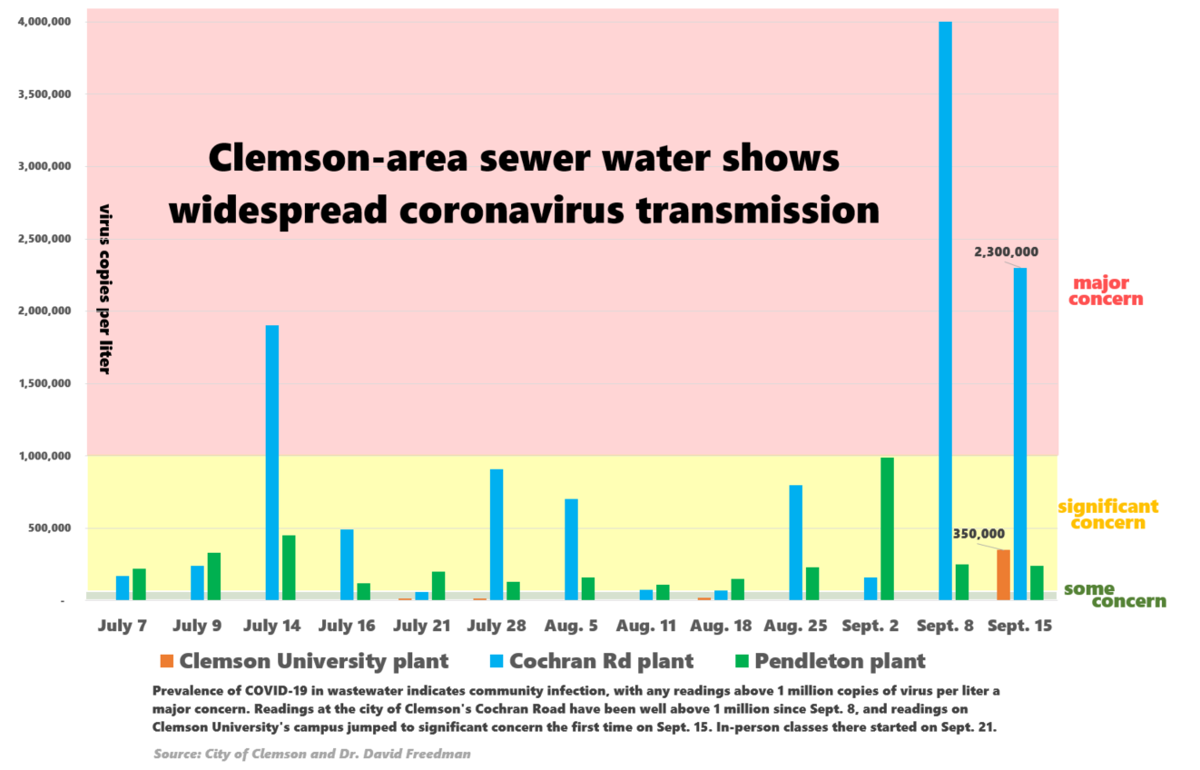 Data released this week show for the first time the presence of coronavirus in campus wastewater at Clemson University at significant levels. 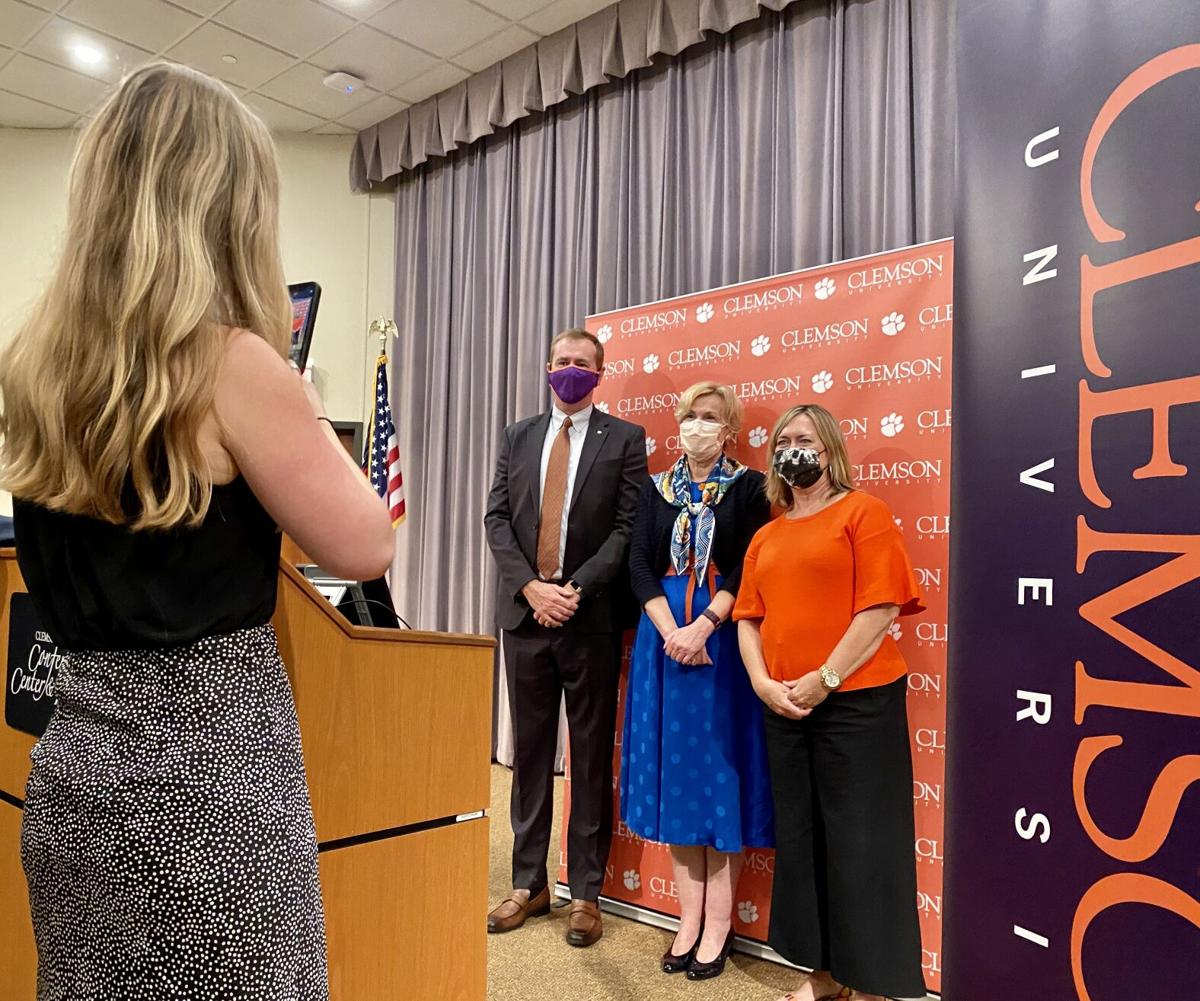 CLEMSON — The lead coordinator for the White House coronavirus task force, in Clemson on Friday as part of a 17-city college tour, praised the school for its testing transparency and wastewater research.

Dr. Deborah Birx, a constant figure in White House briefings about the pandemic, spent about 30 minute with reporters after spending a day with community leaders and researchers. Wearing her trademark scarf, Birx answered questions, took a few photos with Clemson officials and headed back to Washington, D.C.

"You could not ask anything more of a university than to provide information in a transparent way that others can use," Birx said, adding praise for the work Clemson did all summer to prepare for students returning to campus.

Clemson University's online COVID-19 dashboard, last updated Sept. 18, shows more than 2,500 people at the school have tested positive for COVID-19 since June 5. Graphics show the daily case counts surging the first week of September and again last week. Another graphic shows the percentage of positive tests. Everyone wanting to come to campus must first be tested, according to school policy, and they are subject to regular testing thereafter.

"It's one of the best we've seen," Birx said, adding she hopes the university finds a way to update the dashboard more frequently now that classes have begun.

'Flame looking for fuel': Clemson wastewater hints at virus rise, with students on the way

Birx has visited multiple cities and colleges campuses in recent weeks in the ramp-up of testing and contact-tracing as students return to school and cold weather descends, conditions that experts fear could lead to another wave of outbreaks. She was most recently in South Carolina on Sept. 10 to announce that a federal "surge" team would aid Columbia with its coronavirus response. In early September, the University of South Carolina was reporting more COVID-19 cases than almost any other college campus in the nation.

Among experts on Clemson's campus that Dr. Birx consulted with was David Freedman, an engineering professor at Clemson who has been analyzing wastewater in Clemson for the presence of the coronavirus since May. Readily available data like this  is what gets through to young people, she said, many of whom may be asymptomatic, and persuades them to avoid large gatherings and parties.

She told reporters at a 2 p.m. briefing that she "challenged" Clemson to expand the wastewater testing. Clemson and Baton Rouge, La., have both done a good job of monitoring wastewater not only on campus but in the surrounding community, she said. Clemson has months of baseline data to compare new results against.

She also asked Clemson to coordinate with the Centers for Disease Control on closely monitoring students in quarantine over the next two or three weeks to examine exactly how long they shed viable virus, i.e., virus that can infect others. Finally, she said she has asked Clemson to study the physical space inside classrooms to understand more thoroughly the requirements for socially distancing among students and faculty.

"I'm thrilled that the universities are back, that the researchers and lab techs are back," she said.

Birx emphasized the importance of wearing masks in public, both indoors and outdoors. She said the most common source of spread is gatherings among people who know each other. Families and friends feel safe with each other, she said, but the virus spreads in these situations easily if masks aren't in use.

Going into fall, Birx said she does fear that the colder weather will drive people inside, where they are most likely to spread the virus. This is what happened over the summer when hot weather pushed people in warmer states inside for the air-conditioning. She said the best mitigation method is for people need to wear their masks, keep six feet apart and wash their hands frequently.

"We learned a lot from the South," she said. "When they moved indoors because it got hot, you could see the viral spread."

Birx closed the briefing without addressing issues more politically fraught, such as the president's thoughts on wearing masks and her own position within the White House coronavirus taskforce. CNN reported earlier this week that Birx is not comfortable with the direction the group has taken in recent weeks since the addition of a new White House adviser, Dr. Steve Atlas.

While at Auburn University on Thursday, she told reporters she has no intention of leaving the task force, according to the Associated Press.

"We are in the middle of a pandemic that is affecting Americans. As an American, I think I can do the best service to my country right now by serving in this role, working across the agencies because that is the experience that I have," Birx said Thursday.

Views also vary within South Carolina on masking. Clemson students speaking to a Post and Courier reporter in mid-September questioned the point of them. "This is soooo dumb," one said.

A lawsuit filed this week by the owner of a popular Spartanburg hamburger restaurant has challenged a local mask mandate as well as the governor's emergency orders. The lawsuit from Ike's Korner Grille owner Neil Rodgers goes after Gov. Henry McMaster's authority to declare and repeatedly renew a state of emergency in South Carolina since last March, something the lawsuit argues should have been approved by the General Assembly after 15 days.

Still, the virus is widespread, as evidenced by wastewater data released this week. Findings show for the first time the presence of coronavirus in campus wastewater at Clemson University at significant levels. The virus had never been detected at levels above 17,000 copies of virus per liter until Sept. 15, when it shot up to 350,000. Meanwhile, levels in the city of Clemson's wastewater treatment plant have been above 2 million since Sept. 8. Experts say analysis of wastewater can give policymakers up to two weeks to respond to stop an outbreak of disease.

Birx started her career in government in 1985 researching HIV/AIDS for the Department of Defense. She trained at Walter Reed Army Medical Center in internal medicine and immunology. Before joining the coronavirus effort, she was a special representative on global health diplomacy for the U.S. government and had become a world-renowned medical expert on HIV/AIDS.