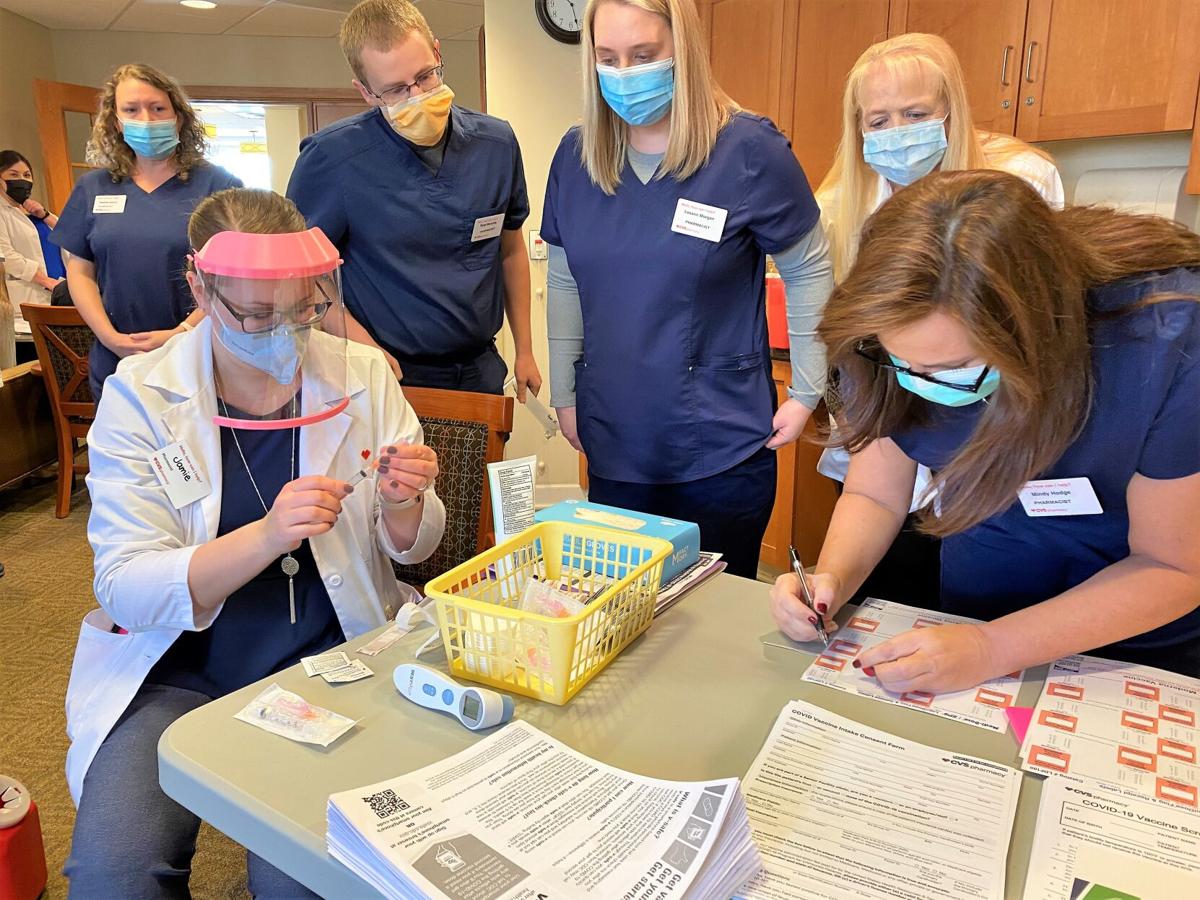 CVS pharmacists and pharmacy techs prepare to administer the Moderna coronavirus vaccine to residents and staff at the Patewood Health and Rehabilitation Center in east Greenville pn Monday on Dec. 28, 2020. In a federal report released this week, the Greenville-Anderson-Mauldin metropolitan area tops the nation among mid-sized regions for coronavirus infections. File/Anna B. Mitchell/Staff 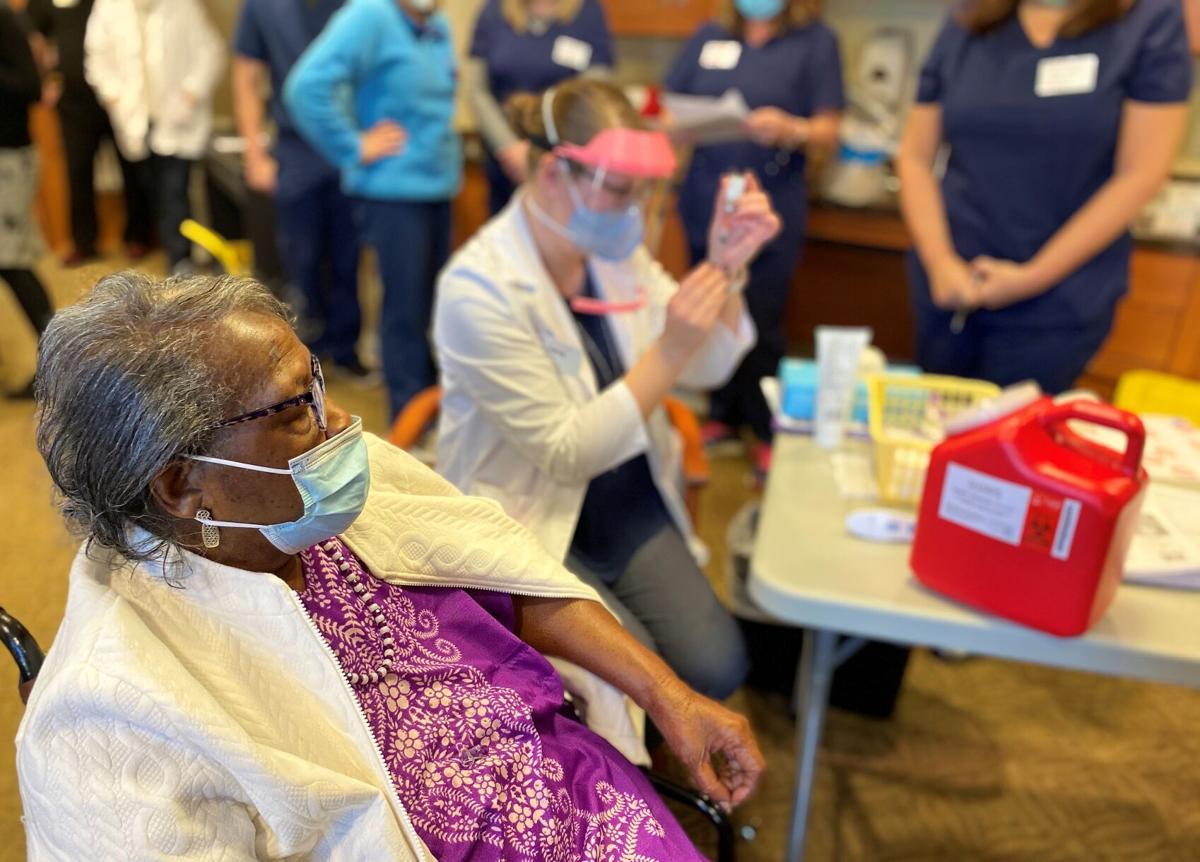 Blanche Palmer (left), 91, prepares for her first inoculation against the coronavirus on Monday, Dec. 28, 2020. Palmer is a resident of Patewood Health and Rehabilitation Center in east Greenville and was the second nursing home resident in Greenville to receive the Moderna vaccine. File/Anna Mitchell/Staff

GREENVILLE — The spread of the coronavirus in the Greenville area is as bad as you think.

In a federal report released this week, the Greenville-Anderson-Mauldin metropolitan statistical area leads the nation among mid-sized regions for coronavirus infections, and a leading state epidemiologist says it is because of the way people here are behaving.

On Tuesday, the White House COVID-19 Task Force released its latest Community Profile in which experts gauge metrics such as case numbers, positive tests and infection trends to determine the hardest-hit areas for the pandemic nationally.

On Page 23, under the header "select high burden core-based statistical areas," the Greenville area is listed as the worst center of outbreak among areas with populations of 250,000 to 1 million. The area is comprised of Greenville, Anderson, Pickens and Laurens counties but does not include Spartanburg County. 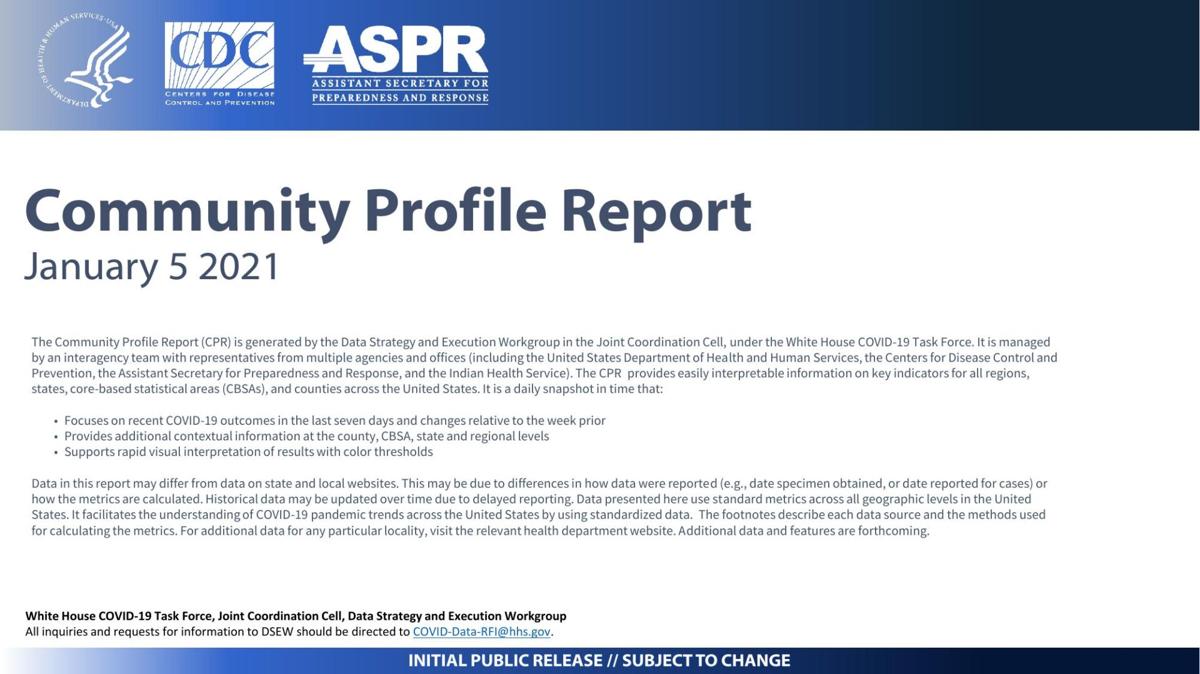 "It's complicated. It's both biology and behavior," Kelly said. "We've all seen people who wear masks not quite right. So the mask isn't very effective if it's below your nose, for example. And there are a lot of individuals who don't feel wearing a mask is very important. They have just not embraced the message."

The Community Profile report issued this week looks at metropolitan areas. The Greenville-Anderson-Mauldin area population, according to the study, is 920,477. Greenville County's population is about 520,000. The metro area's infection rate over the past seven days — cases per 100,000 — currently stands at 762.

Masks in addition to other social distancing measures work, Kelly said, and multiple studies prove it. The S.C. Department of Health and Environmental Control earlier this year released its own study showing how jurisdictions that have mask ordinances — and enforce them — have lower case loads.

The city of Greenville, with a population of around 70,000, first added a limited mask requirement in the summer and extended it to all retail establishments on Oct. 12. The city of Easley, with just over 20,000 residents, passed an ordinance in late December. Neither Greenville County nor any of the neighboring counties have a mask mandate.

Upstate SC hospitals, short on staff due to virus, at capacity to care for COVID-19 patients

"We have just been through a holiday season where I think people often put on hold precautions, thinking, 'It's just a day. It's just one time. I need to get together with my friends and family,' " Kelly said. "And unfortunately, I think we are seeing the consequences of that now."

Cases in schools bog down database

Asked about Greenville County's public school attendance policy — which has about 35,000 elementary and middle school students attending classes in person full time — Kelly said the bigger infection risk is activities these kids might be engaging in outside of school.

SC 'to see a big surge coming up' in coronavirus cases after holidays, MUSC expert warns

She cited a study published last month in the Centers for Disease Control and Prevention's influential Morbidity and Mortality Weekly Report that examined the behavior of about 400 kids in Mississippi and found that attending schools where coronavirus precautions were in place was not associated with infection.

"From a public health point of view, it is not just about what is going on in schools, in person," Kelly said. "It's what's going on in the community."

Case reports came flooding into the database of Greenville County schools this week, spokesman Tim Waller told The Post and Courier on Thursday. They bogged down the system, which has not been updated since Monday.

"We don't have the capacity in our system to keep up with it," Waller said. "It's really because parents waited until the last minute to report cases."

He said the school system's COVID-19 dashboard would be updated early Friday but didn't know yet Thursday afternoon how many there would be.

The COVID-19 Task Force report also looked at the surge in cases compared with the week before and the positivity rate of coronavirus tests. Greater Greenville does not lead among these metrics but is near the top, with a 29.9 percent positivity rate, second to Provo's 30.7 percent, and a surge in cases week-over-week of 34 percent.

Surges in Provo; Oxnard, Calif.; and Augusta have been worse at 46 percent, 35 percent and 52 percent, respectively.

Mid-sized cities fared somewhat better than those with populations over a million and those below 250,000.

Nathaniel Cary contributed to this report.