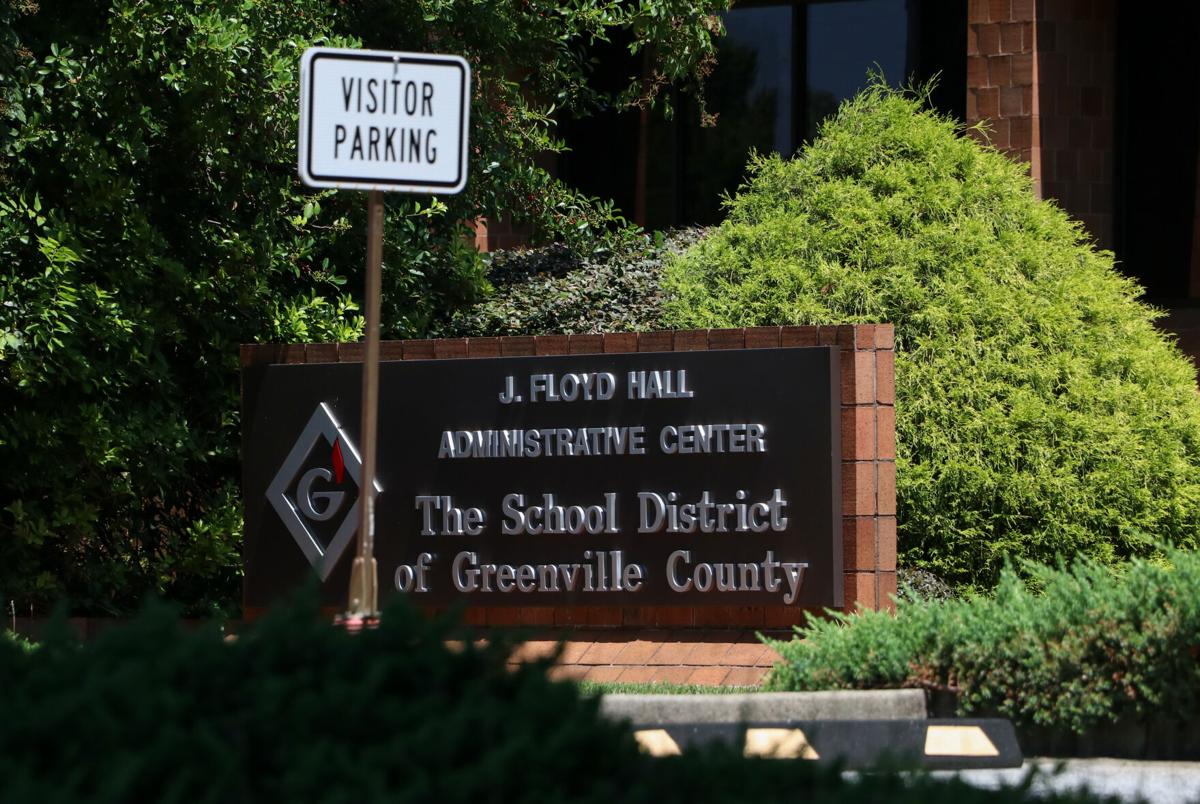 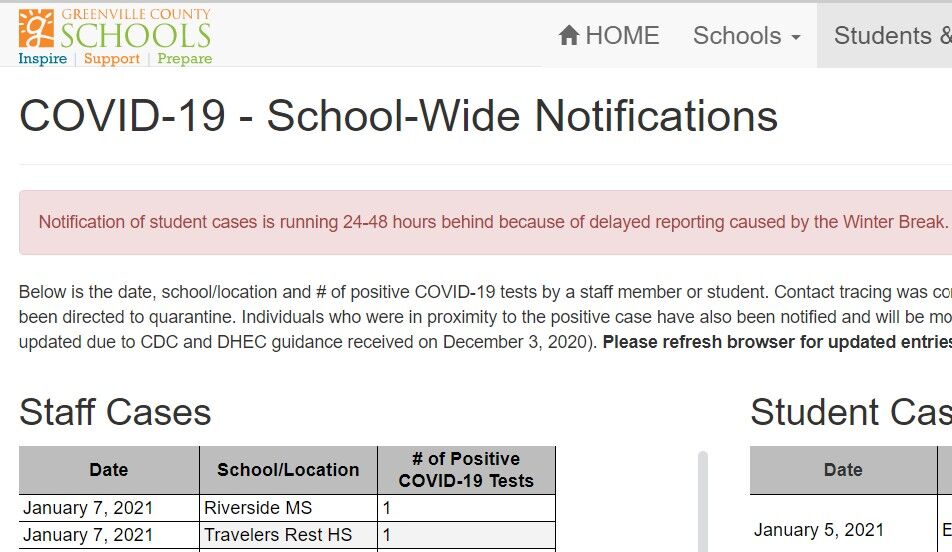 A screenshot of the COVID-19 page on the Greenville County Schools website, taken Friday morning, Jan. 8, 2021. 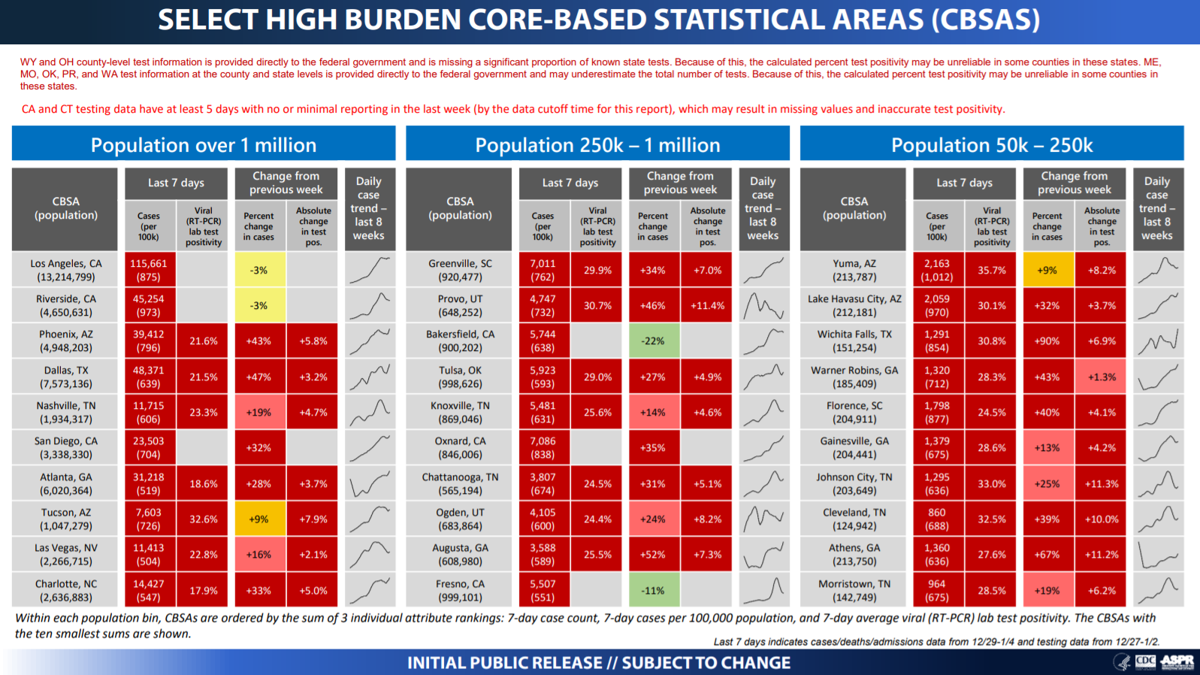 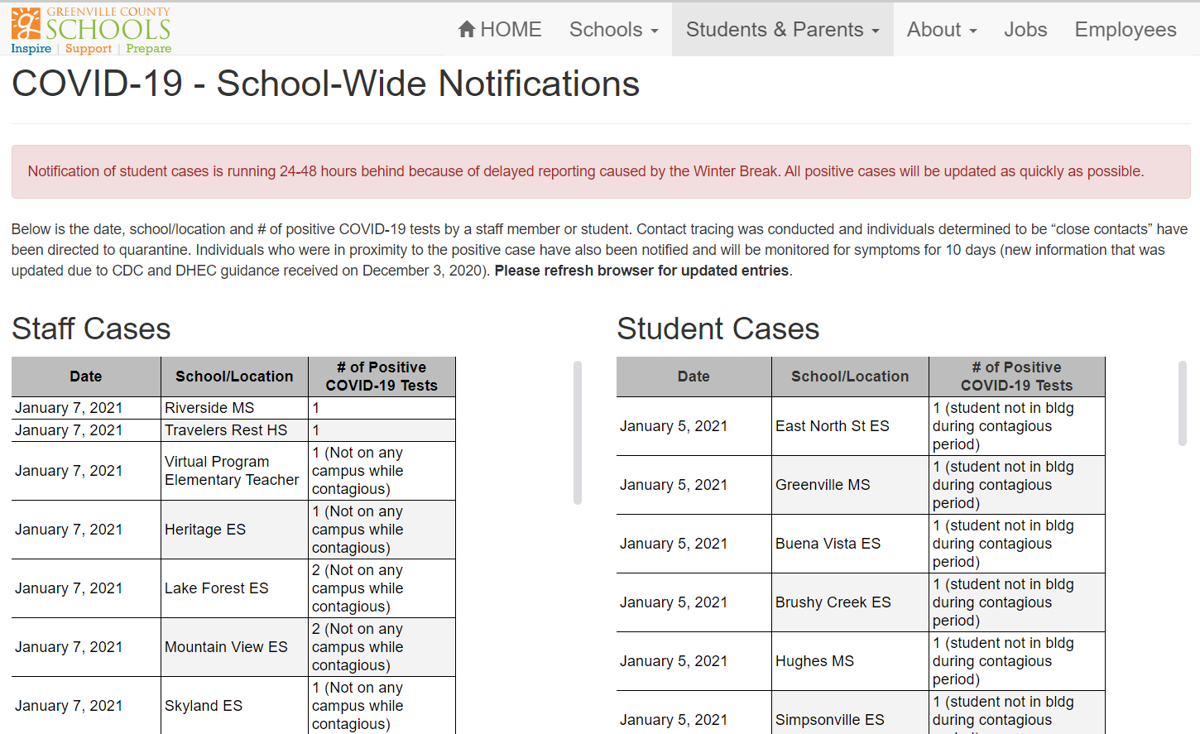 With hundreds of coronavirus reports coming in to Greenville County Schools from students exposed to the virus over the winter holidays, the district's COVID-19 dashboard bogged down this week. No updates occurred online for three days, and a banner was added Thursday, Jan. 7, 2021, afternoon alerting that there would be a 24 to 48 hour delay in reports.

A screenshot of the COVID-19 page on the Greenville County Schools website, taken Friday morning, Jan. 8, 2021.

Editor's note: This story has been updated to clarify the reporting procedures for COVID-19 in Greenville County Schools

GREENVILLE — The Greenville County Schools online coronavirus dashboard was partially shut down for much of the week as personnel found themselves inundated with emails from parents whose children were exposed over the winter holiday.

By Friday morning, the site's student data was updated to show infections through Tuesday of this week, but reports from Wednesday and Thursday will take through the weekend to post, district spokesman Tim Waller told The Post and Courier late Thursday. Staff reports are up to date.

The dashboard was launched at the beginning of the fall semester to provide a public, ongoing tally of infections of student and staff within school buildings.

In the seven days from Dec. 30 to Jan. 5, the school district listed 332 known cases of student coronavirus infections on the site; Jan. 5 logged 43 cases, and Jan. 4 — the first day that students reported back from the winter holiday — logged 214 cases.

Parents alert their school principals when their children have been exposed to someone who is infected or are themselves infected, according to district policy. The schools then share these reports with the district. The district's Google drive system generates an email for each coronavirus report with an attached PDF document that goes to district administrators, Waller said. This week's reports, Waller said, has created "an avalanche of paperwork."

"Our medical health services directors are digging though hundreds of reports trying to figure out what's what," Waller said.

Only known infections are reported on the district's COVID-19 dashboard, not exposures, so all the reports and data must be parsed. From there, a series of steps are set in motion. Students who have been in contact with someone known to be infected must quarantine for at least 10 days, according to school policy. Students who are known to have been infected must isolate at home for at least 10 days, and the district undertakes contact tracing.

Every positive case reported on the district dashboard includes a note indicating whether infected students were inside a school building while contagious.

"We don’t have the capacity in our system to keep up with it," Waller said. "It’s really because parents waited until the last minute to report cases."

All absences associated with exposure or infection are excused.

The site's shut down this week came as the greater Greenville area was placed at the top of a national list of outbreaks in mid-sized areas. The Greenville metropolitan statistical area, which includes Greenville, Anderson, Pickens and Laurens counties, reported a known infection rate of 762 per 100,000 people in the past seven days. The area's total population is 920,477. Total new case count for the previous week in that area as of 3 p.m. Tuesday was 7,011.

Parents, angry at the school district's decision to reopen as planned on Monday during an acute outbreak, launched a petition drive last week demanding more transparency from district leaders and asking them to scale back the number of students in schools.

Plexiglass in schools: A placebo or protector? Experts sound the alarm.

The district said earlier in the week it received advice from public health officials saying students are safer in class than they would be at home, given the lack of adherence to safety protocols in the community as a whole. The Post and Courier has not been able to confirm that any public health officials said that. A Freedom of Information Act request to the district for documentation is pending.

Several of those same petitioning parents contacted The Post and Courier this week concerned that the district's COVID-19 dashboard was not being updated.

Parent David Wood, who has two children attending in-person classes, said he would prefer the district stick to its original attendance plan, which would have daily attendance reduced to 25 percent or 50 percent in the event of high community spread.

Parent Wendy DeGraaf, whose two children attend the district's virtual academy, said she has heard from parents who want to keep their children home from in-person classes but who fear the repercussions of unexcused absences. Children are declared truants after 10 days of unexcused absences in South Carolina, and staying home out of fear of the pandemic is not considered an excused absence.

Wood said he has reached out to Superintendent Burke Royster and school board members about the possibility of altering the district's attendance plan to allow for parents concerned about the pandemic to let their children take classes online during especially bad outbreaks. He said he has not heard back. Switching to the virtual academy, an option that parents can work out with principals individually, is an extreme solution, Wood said, because students would have to remain virtual for the rest of the school year.

The school board will hold a regular meeting on Tuesday, and the agenda, which posts Friday, will likely include an update on the coronavirus, as it has for every meeting this year. Wood said he would be there.

Asked about Greenville County’s public school attendance policy — which has about 35,000 elementary and middle school students physically in school buildings full time — state epidemiologist Jane Kelly said the bigger infection risk is activities these children might be engaging in outside of school.

Parents argue that, because of the district's attendance policy, children who are not engaging in risky behavior outside of school are currently being exposed to those who are.

"I think they are very short-sighted in that they went out and publicly said they know people are not following guidelines and yet we'd like them in schools and with your kids seven or eight hours a day," DeGraaf said. "(District leaders) are not seeing the big picture."