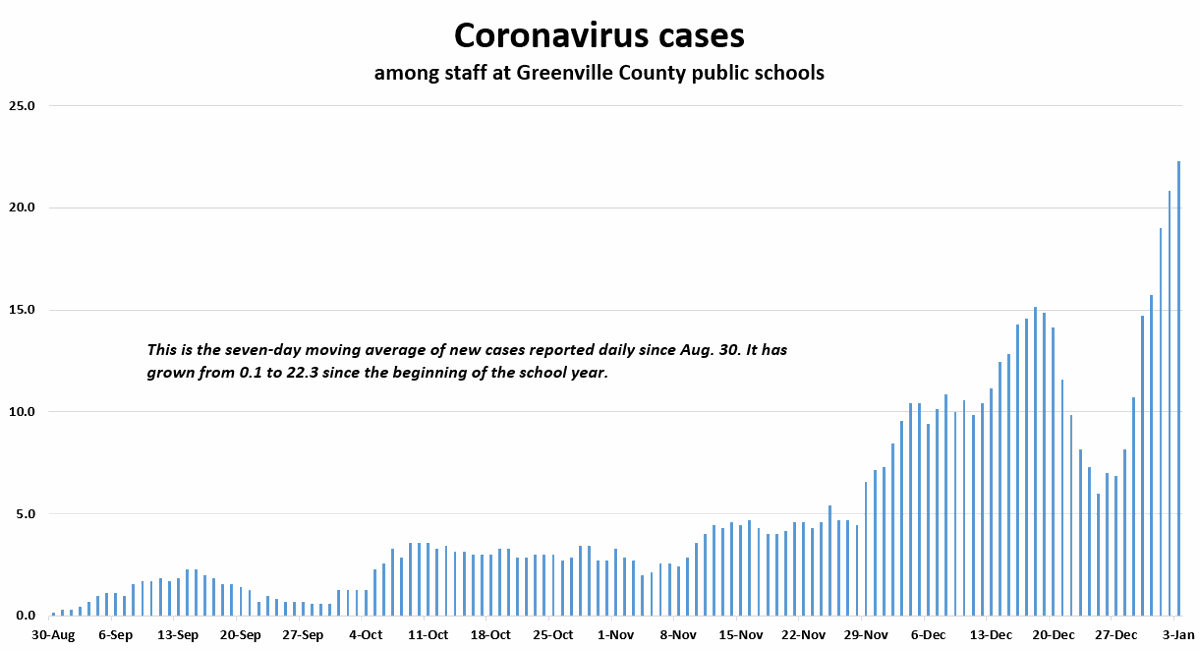 An analysis of infection data shows the seven-day moving average of new coronavirus cases reported daily among staff at Greenville County's elementary, middle and high schools since Aug. 30. It has grown from 0.1 to 22.3 since the beginning of the school year. 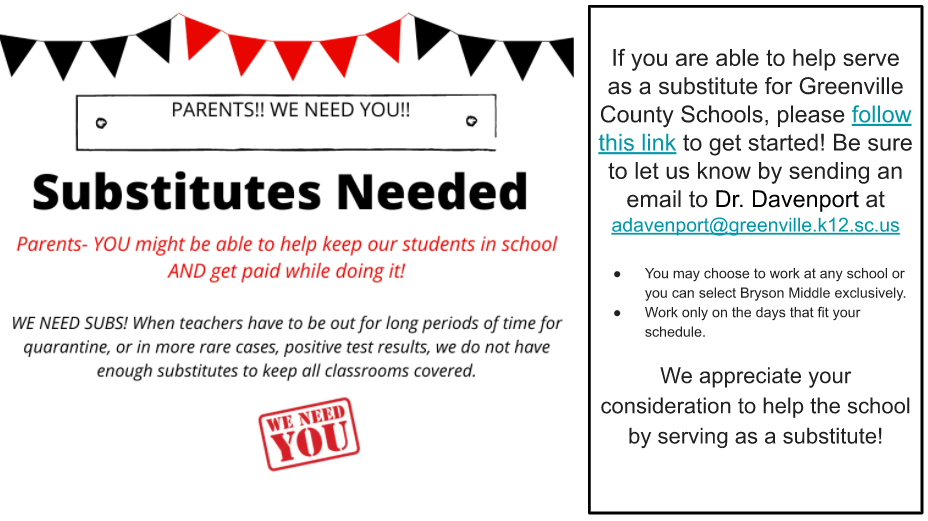 Bryson Middle School in Greenville County had this advertisement posted on its website Monday, Jan. 4, 2021, urging parents to consider substituting for teachers out sick.

It also repeated that it did so in consultation with the state and local hospitals. But public health officials The Post and Courier reached late Monday and early Tuesday would not confirm they had advised — as the district has claimed — that a failure to reopen schools would make the current surge in cases worse.

The district's decision has sparked protest from thousands of people who signed an online petition penned by Greenville County parents questioning the wisdom of reopening schools Monday after the two-week holiday and asking for more transparency in how the decision was reached.

In the district's Monday statement, released through spokesman Tim Waller, the district reaffirmed that it had reached its decision in consultation with the South Carolina Department of Health and Environmental Control, Prisma Health and Bon Secours Health System.

"Based on the many protocols GCS has in place to help mitigate the spread of COVID, none of these entities have at this time, or any time, recommended that we step back from our current or proposed operating mode," the statement said.

In letters emailed nearly simultaneously Thursday afternoon to Greenville County parents and teachers, the district said it received "specific guidance" from medical officials at Bon Secours, Prisma Health and DHEC on their decision to reopen schools.

The letter said public health officials "believe (and we agree) that a failure to return to school will make the situation worse."

The Post and Courier reached out to all three entities, and none confirmed making such a statement. Requests for documentation over how the district reached its decision to reopen and who was involved are pending.

A spokeswoman at DHEC wrote in an email that her agency regularly answers questions from school officials and provides information, but DHEC, she wrote, does not make determinations about school operations.

"DHEC officials didn't issue the statement you referenced," the DHEC spokeswoman wrote. "You'll need to reach out to the district for the source of that information."

Furman University medical ethicist Carmela Epright said the assertion that reopening schools would make the community safer is "a very big claim" and questioned the district's lack of transparency in reaching that conclusion.

"It's the kind of claim that DHEC doesn't usually make," Epright said.

The Post and Courier received a partial answer Monday after asking Waller and district communications director Teri Brinkman for the names of the public health officials with whom the district was consulting.

Dr. Brannon Traxler, the state's interim director of public health, was the primary contact at DHEC, Waller wrote, but the district declined to name who was offering advice from local hospitals.

"Because the local health systems have served only as consultants without any authority to open or close schools, and since our contacts at Bon Secours and Prisma Health have made it clear to us they are representing the expertise of their respective systems and not just individual opinions, we will refer back to those systems any requests for individual names," the district statement said.

Sandy Dees, spokeswoman for Prisma Health, wrote in an email that schools are "uniquely challenged." Schools must juggle multiple concerns around child welfare, including possible infection but also a child's development and broader care "including that some children receive their main nutrition there as well as psychological, occupational and speech therapies."

"Many school districts and programs such as the YMCA childcare programs have safely operated through surge situations," Dees wrote, adding that strict adherence to safety protocols is a must.

Dees did not say who from Prisma was consulting with the district.

Responding by email early Tuesday, a spokeswoman at Bon Secours, Jennifer Robinson, also did not disclose who there was advising the school district. Robinson also did not answer whether Bon Secours had advised the district that reopening schools at full attendance would tamp down the spread of coronavirus.

"We have offered our medical expertise regarding the public health protocols put in place to mitigate the spread of COVID-19 and ensure the health and safety of our communities," Robinson wrote. "We also provide regular updates to the district about the rate of spread in the community, similar to the updates they would receive from meteorologists about expected conditions during an impending weather event."

Schools at their fullest since March

More students are currently taking classes in person in the Greenville area than at any point since the pandemic shut down schools last March.

Nearly 35,000 elementary- and middle-school children are now in class five days a week, and about 15,400 high-school students are attending classes at half capacity Monday through Thursday. Another 22,000 kids are taking all their classes online.

Meanwhile, cases in the county have been steadily rising since before Thanksgiving. Greenville County has reported 7,683 confirmed cases over the past two weeks, by far the most in the state, according to state health data. The infection rate is more than 1,400 per 100,000 residents as of Saturday, meaning that 1 of every 70 residents has been confirmed positive for COVID-19 in the past two weeks. Only Pickens County has a higher per capita infection rate in South Carolina.

Last week, Dr. Wendell James, chief clinical officer for Prisma Health, the state’s largest health care provider, said Upstate residents "need to be afraid at this point." Upstate hospitals, he said, are at or near capacity, and staff are worn out. Many healthcare workers are out sick.

In its letters to parents and teachers last week, the district said it would shut down schools on a case-by-case basis if they could not be staffed sufficiently or safely. Schools would shut down, in other words, when too many adults are out sick. The statement did not specify when this threshold would be reached, but Superintendent Burke Royster has previously reported that the district is suffering an acute shortage of substitutes.

Bryson Middle School, on its website Monday, asked for parents to step in.

"Parents — YOU might be able to help keep our students in school AND get paid while doing it," the site said.

District officials reported last month to the school board that the rate of coronavirus infections inside the school system remains much lower per 100,000 than in the community at large.

While true, The Post and Courier has previously reported that cases in a population of students and school staff skew lower in part because of the disproportionately large number of children in the data pool. Children are less likely to be infected or to exhibit severe symptoms from coronavirus, according to Centers for Disease Control data. The data pool also includes students and teachers in the district's virtual program.

About 30 percent of the district's staff are 50 years old or older, a group at higher risk of developing severe symptoms from COVID-19.

An analysis of coronavirus infection data from 86 elementary, middle and high schools in the district showed cases among staff currently at their highest since the pandemic began, according to the district's COVID-19 dashboard. The seven-day moving average of new cases on Monday was 22, compared to 10 a month ago.

The district has said the vast majority of infections among students and staff have occurred outside of school facilities or functions, indicating classroom protocols and safety measures are effective.

Parents push back, others applaud decision

Authors of the online petition said the school district's decision to reopen schools does not square with advice that local or state officials have circulated in recent days.

"Such recommendations do not seem to align with these agencies' other recommendations, e.g. foregoing usual holiday celebrations or to not attend public events," the petition says. "Healthcare professionals are pleading with our community to change behaviors, to do all we can to limit the spread of this virus, yet we are not only continuing forward in current attendance plans for Greenville County Schools but expanding them."

Still, a parent-led Facebook group — Parents for the Return of Extracurriculars, School, and Sports (PRESS) — applauded the district's decision. The PRESS group helped elect two school-board members who have for months advocated for a parent's right to choose five-day attendance.

"It might sounds awful but the way I see it, is if you don’t want to do your job, you are welcome to find another one," one member wrote. "This really goes for any field IMO. I hear people from all professions complaining about working in this “environment”.

The school district in its emails to parents and teachers last week said people follow anti-infection protocols better in a monitored environment.

In a school board meeting last month, district leaders spent more than an hour talking about how the pandemic is affecting student academic achievement. Test scores have held steady, but thousands of children are failing classes.

If academics are driving the attendance plan, Epright said, district leaders should level with parents and teachers about that.

Parent Candace Eidson, who has a 15-year-old, special-needs daughter at Bryson Middle School, said she was comfortable with the attendance plan that the school district proposed in August. Under that plan, schools would be open at no more than 25 percent capacity when spread of the disease was high. High, as defined by DHEC, is 200 cases per 100,000 residents.

That approach was abandoned this fall when school board members voted to give Royster full authority to determine how to manage school attendance.

"So now you can bring all the kids back in school you want," Eidson said. "But they've been having fun over the holidays, some of them. And they are going to bring coronavirus back with them."

Reopening schools at full capacity now, she said, punishes families that have been following safety protocols.

"Throughout this pandemic and especially once planning began for a return to in-person learning, Greenville County Schools has been in regular contact with medical representatives from DHEC, Prisma Health, and Bon Secours, seeking guidance and expertise regarding the protocols we have adopted to ensure the health and safety of students and staff and our plans to increase in-person attendance.  Though only DHEC has the statutory authority to close schools, we have continued to seek input from experts who live and work in our community each time we have made a decision about revising or increasing in-person instruction, including last Thursday, Dec. 31, when we affirmed our plans to return to school on Jan. 4.  Based on the many protocols GCS has in place to help mitigate the spread of COVID, none of these entities have at this time, or any time, recommended that we step back from our current or proposed operating mode.

"Dr. Brannon Traxler, Interim Director of Public Health is our primary contact at SC DHEC. Because the local health systems have served only as consultants without any authority to open or close schools, and since our contacts at Bon Secours and Prisma Health have made it clear to us they are representing the expertise of their respective systems and not just individual opinions, we will refer back to those systems any requests for individual names.”