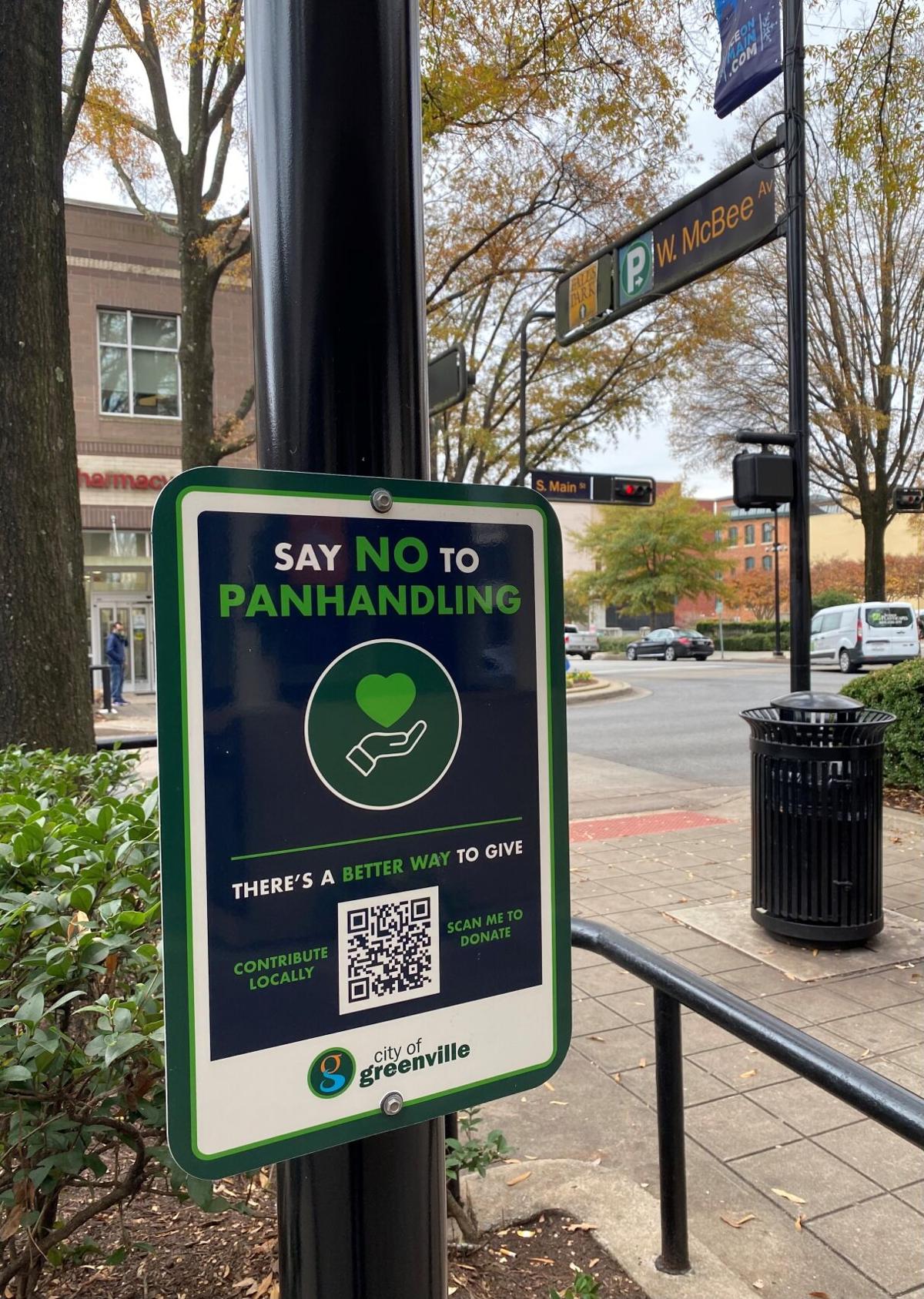 The city of Greenville has installed signs downtown discouraging giving money to panhandlers while also offering a scannable code to donate to efforts to help the homeless. December 4, 2020. 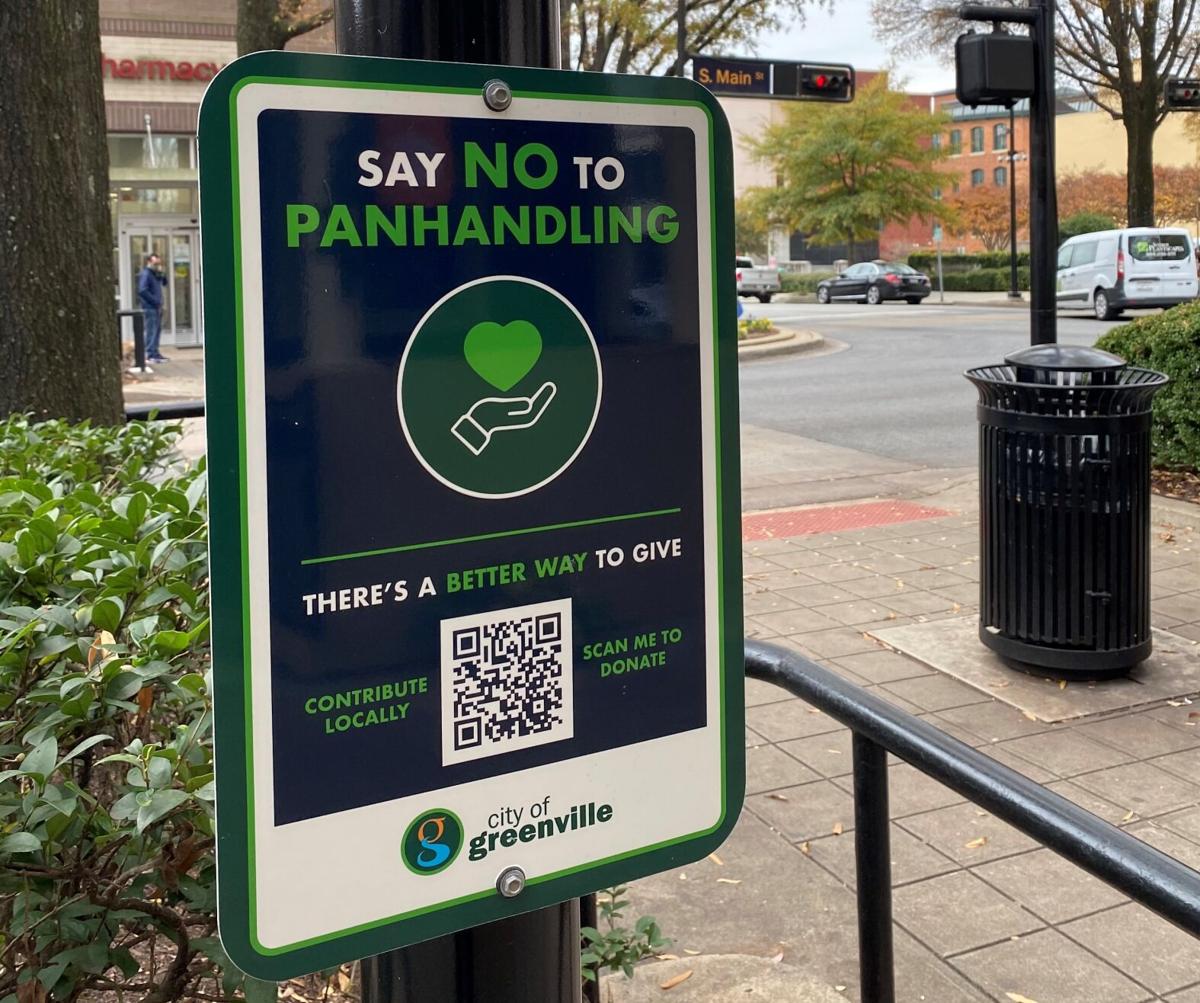 The city of Greenville has installed signs downtown discouraging panhandling but that offer a scannable QR code to donate to homeless causes. December 4, 2020. 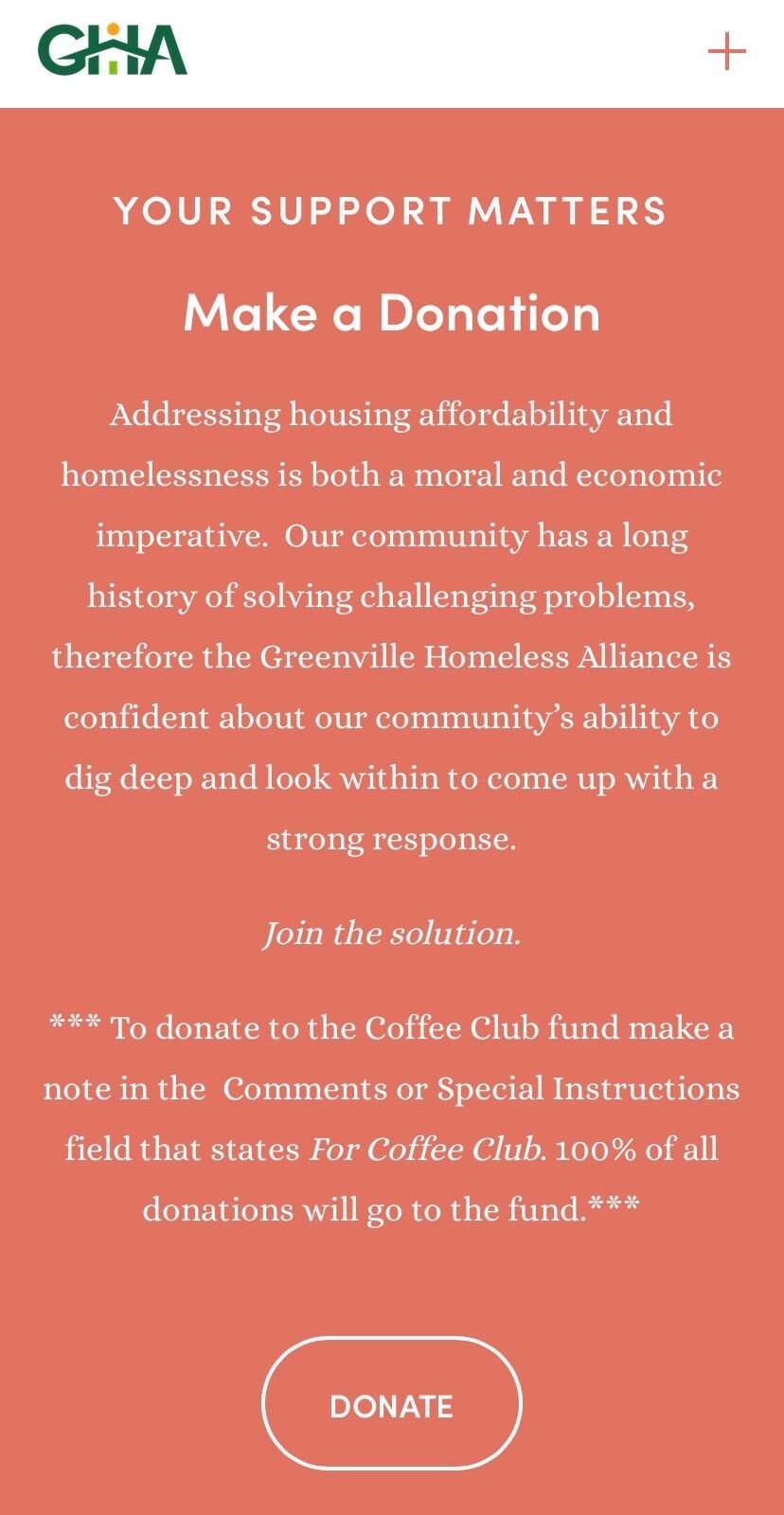 People who scan a QR code on downtown Greenville "no panhandling" signs are directed to a Greenville Homeless Alliance webpage to donate to an ad hoc advocacy group the "Coffee Club."

The concept is simple.

The presence of panhandlers in downtown Greenville has grown along with everything else, so put up signs that ask well-intentioned people not to give away their money.

But instead of just saying no, also add a feature: a scannable QR code that allows a person to use their phone to donate directly to the service providers that shelter and feed the homeless.

Since September, 12 such signs have been placed throughout the central business district along sidewalks and plazas and the bus station.

But three months in, a central question can’t be definitively answered.

After an inquiry by The Post and Courier to determine how the codes are used and their effectiveness, the city and the nonprofit agency that handles any donations say the system will need to be improved.

So far officials haven’t been able to track what donations come from the QR codes — if any are at all.

“If we’re sincerely asking people to trust us and to donate, it’s certainly worth reviewing if there’s ways to make people feel better and safer about donating,” city spokeswoman Beth Brotherton said. “The city is going to review the transparency, review the language.”

To be clear, any money donated through the new system is going to homeless causes, said Susan Mclarty, coordinator of the Greenville Homeless Alliance, a coalition of a host of homeless service providers.

The Greenville Homeless Alliance started organically in 2014 in response to the "Tent City Crisis." On the west side of Greenville, an entire camp of homeless people claimed a largely unseen spot, set up tents and called it home.

The tent city was problematic because the people living there did so in squalor and many struggled with mental health and addiction problems.

The alliance began to consolidate more as the disparate providers saw the need for a unified mission and more advocacy and resources to address the problem.

Six years later, the alliance has become more of an organized force that has spent significant energy imploring the city to offer financial assistance to homeless causes, instead of leaving all the work to nonprofits and private donations.

It's in that context that the QR code sign system has served as an experiment — but one that needs revising, Mclarty said.

"There's more steps we're all going to have to take to make it more effective," she said.

The system only tracks the number of people who scan the code and are delivered to a site to donate. The dollars aren't tracked and if any donations are made, they would show up as general donations, she said.

So far, there have been 453 visits to the city's webpage from the code scans, Brotherton said. That's all that it is known.

Both the Homeless Alliance and the city agree the system is clunky and needs more transparency.

A person who scans the code is sent to a city webpage that describes how the coalition formed and in particular an ad hoc group known as "The Coffee Club."

The group represents more than two dozen homeless service providers, which include Miracle Hill Ministries, United Ministries, Greater Greenville Mental Health and the Salvation Army. The initial mission of the Coffee Club group was to vote on how to use money raised during awareness of the Tent City crisis.

The group has been efficient and effective in putting money where it's needed, Mclarty said. And when it comes to donations, the service providers absorb any cost associated with making them, so all the money is used to help the homeless, she said.

On the city webpage that describes the group and the mission is a large, green "donate" button. Then, a user is directed to a donation page that is run by the Homeless Alliance and refers to "Coffee Club."

On the page, users enter information about themselves or can remain anonymous, and they are asked to enter payment information.

The problem, Brotherton said, is that the final destination page is confusing, particularly in its branding and clarity of what organization exactly the money is being donated to.

Another problem, McLarty said, is that the process takes too many steps to complete for a person who often might be standing on a sidewalk downtown. A person trying to donate could simply give up.

In an effort to be more precise about tracking the donations, McLarty this weekend added language that requests a user type in "Coffee Club" to help the alliance and partners account for the donations.

On Monday, Brotherton said, the city will update language on its intermediary page to simplify the message and in the coming days will ask the Homeless Alliance to collaborate on a better final donation system.

The city will also require more-detailed monthly data to assess its participation in the program.

The sign system was a collaborative effort that began with the Greenville Police Department.

There were "no panhandling" signs for years at the city bus station, but those needed to be updated, Brotherton said.

The decision was made to expand use of the signs, and 12 new ones were placed at the bus station, the Peace Center plaza, the intersection of Main Street and McBee Avenue, and at the ONE city plaza.

Ed Irick, the lieutenant over the police division that covers the central business district, researched how signs were used in other cities and found the idea of the QR code method.

The effort was born of a wish to help.

“There’s a general desire, myself included, that you want to help, you want to do something good, you want to do your part," Irick said. "It’s putting money in the hands in the organizations that provide shelter and food and services that these people need."

Panhandling itself isn't a crime, he said, but police at times have to intervene when panhandlers become aggressive. There are frequent complaints, usually from people who take a regular route to work or home downtown, about the same panhandlers soliciting money every day, Irick said.

The QR code, he said, allows well-meaning pedestrians to feel better about saying no.

“We took some time to carefully craft that message,” he said. "When I go downtown, it’s easy to make snap judgments about people who are panhandling, whether they’re going to use that money for food and shelter. It’s easy to make that snap judgment, but in the end we don’t know.”

It's not always best to give money to panhandlers, who are know to use the money for a purpose other than they state. If the money is used to continue a substance abuse problem, for instance, the donation is doing more harm than good, homeless advocates say.

That's why the Homeless Alliance supports the signs, Mclarty said. The homeless problem needs to be handled in an organized way that is intentional and in reality helps people on the streets, she said.

"The reason we support anti-panhandling is because we don't want Band-Aid solutions," Mclarty said. "We need to educate the public more."

The QR code system aside, the sign campaign has been successful. In one case, a benefactor donated $2,000 after learning about the general campaign, she said. And Mclarty said she has noticed a higher level of education.

In the end, she said advocates for the homeless want more support from the city, which could be in the form of more financial commitment or in an expanded public relations campaign like the city has done with promoting the use of masks to slow the spread of coronavirus.

“While this is a good education tool and does create greater collaboration between the nonprofits,," Mclarty said, "they don’t really have a financial stake in it. We would like to see them move further in that direction.”