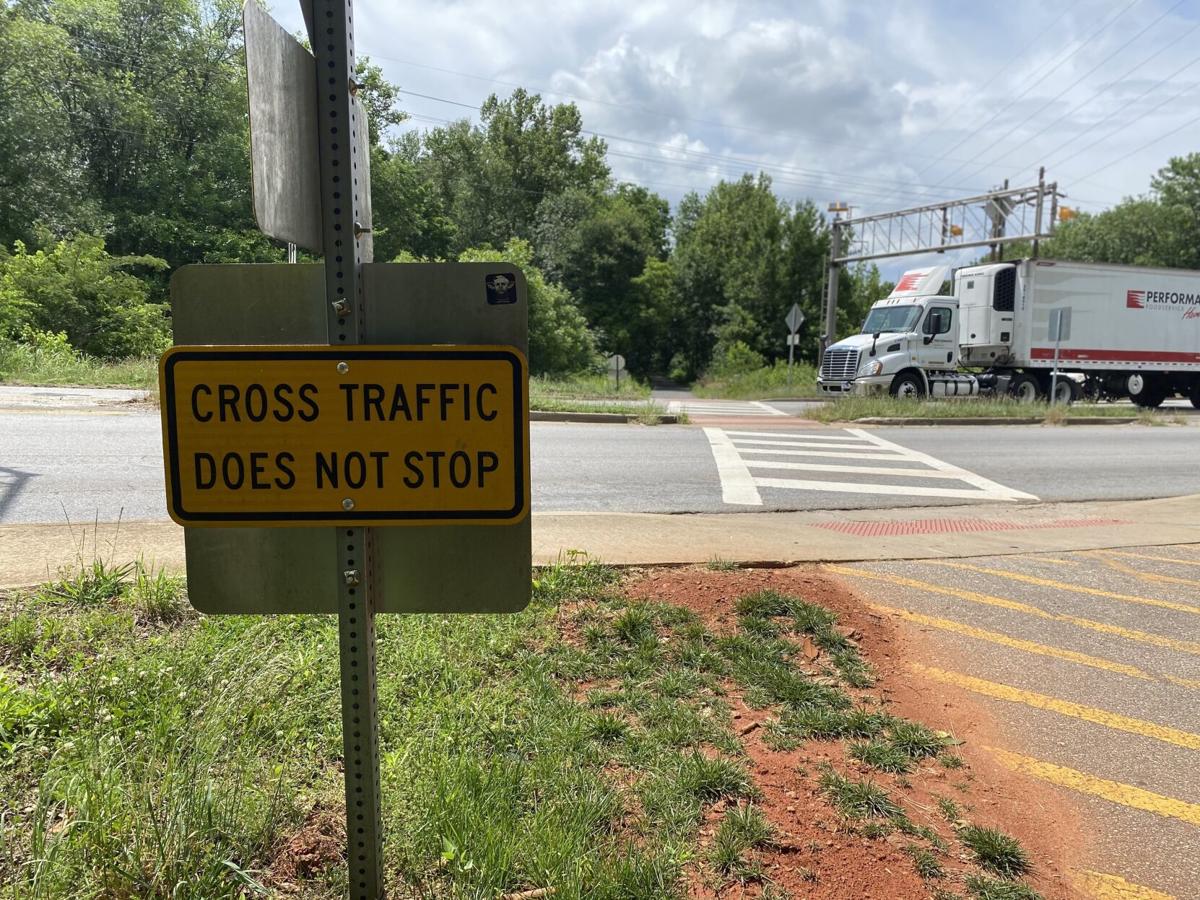 The Swamp Rabbit Trail crossing at Hwy. 253 has long been considered one of the most-dangerous sections of the trail. Pictured June 9, 2021. 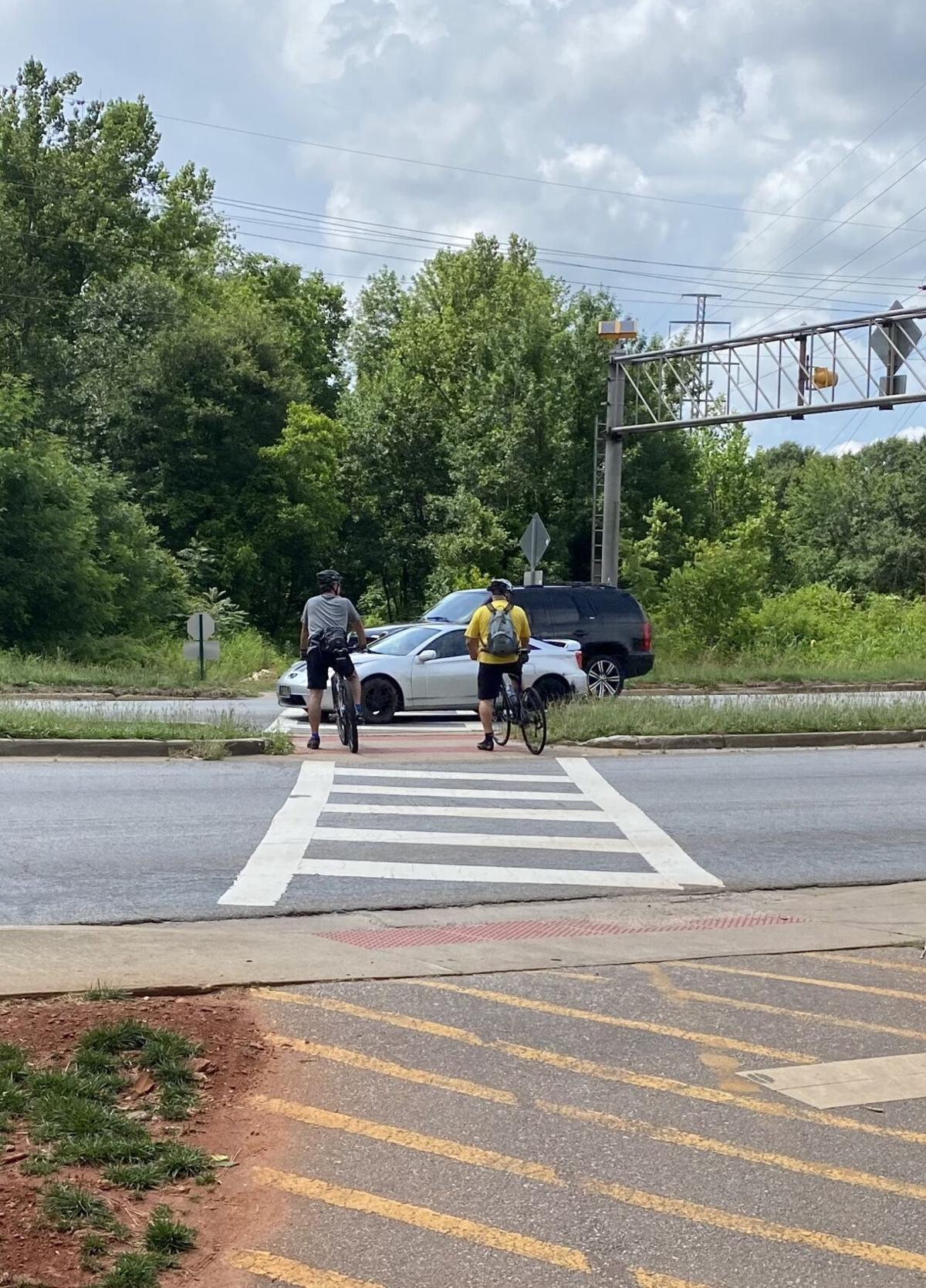 The Swamp Rabbit Trail crossing at Hwy. 253 has long been considered one of the most-dangerous sections of the trail. Pictured June 9, 2021.

GREENVILLE — The flashing signs on state Highway 253 warn drivers that users of the Swamp Rabbit Trail are crossing the four lanes of traffic that carry thousands of cars a day. Users of the trail see a sign that the traffic won't stop for them.

The result is confusion.

Vehicles slow at the approach, unsure whether to stop. Horns blare. Others speed through.

For years, the dangers have been known along that segment of the 22-mile trail that stretches from north of Travelers Rest to downtown Greenville. There have been talks of a bridge over the road, also known as West Blue Ridge Drive, or a traffic light to stop cars. Neither plan panned out.

The present solution is a tunnel.

But there's no clear sign it will happen anytime soon, even as Greenville County councilmembers this week pledged discretionary tax money to start the work.

County Council Chairman Willis Meadows, who represents the district around the crossing, pledged a portion of his discretionary account, along with councilmen Mike Barnes and Dan Tripp, to provide a little more than $25,000 for the project.

The money comes days after an elementary school teacher was killed in a hit-and-run collision June 6 at a trail crossing just to the north on Sulphur Springs Road, though the effort to create the tunnel at Highway 253 was already in the works. The Sulphur Springs crossing is about a mile from the Highway 253 crossing.

That fatal collision came a little more than a week after a woman walking her dog along Augusta Street in the city of Greenville was killed in a hit-and-run.

The deaths sparked a community-wide discussion about pedestrian safety.

Following the pedestrian death on Augusta Street, Greenville City Council voted to amend its capital budget to add $250,000 to hire a consultant to evaluate and prioritize pedestrian safety projects.

During that discussion, Councilwoman Lillian Brock Flemming referred to the additional need to focus on safety at Swamp Rabbit Trail crossings.

"We need to continue to look at those as well as the corridors," Flemming said.

The status of the Highway 253 crossing was discussed June 8 during a Greenville County Recreation Department advisory board meeting. Board member Frank Mansbach, head of the advocacy group Bike Walk Greenville, expressed frustration over how long it has taken to address the crossing.

"We need to be very cognizant of the schedule," Mansbach said. "To me, personally, it's very frustrating."

Ty Houck, who oversees the trail as director of Greenways, Natural and Historic Resources for the Greenville County Recreation District, told the board the county is awaiting the results of a hydrological survey to determine if the tunnel is feasible.

"Until we know that, we don't know the next step," Houck said.

Board member Tamara Dwyer, who lives near the crossing, said the county had a plan for a traffic light but Meadows rejected the idea.

“I have a councilman who takes my calls, I tell him I want that light yesterday, and he tells me he doesn’t want people stopping on their way to work for people doing recreation," Dwyer said.

In an interview with The Post and Courier, Meadows said heavy traffic on the road with a 45 mph speed limit would make it dangerous for the amount of pedestrian traffic crossing, even with a traffic light.

“It’s on a curve and a hill, you just don’t have a good line of view,” Meadows said. “To me, it’s more of a safety thing of people not stopping because they didn’t see it or the bicyclists not getting across, or they (drivers) stop and someone rear-ends them.”

Meadows said a bridge was initially considered but it would have come too close to nearby power lines. That could change long-term because the development team behind the former Union Bleachery property, just to the east of the crossing, is working with Duke Energy on a proposal to move utility lines.

“If that happens, then we would be cleared to go across there and have a bridge,” Meadows said.

The proposed tunnel would use an existing culvert beneath Highway 253 if the state Department of Transportation approves the plan, he said.