Most of Greenville County's roughly 22,000 high-school students and their teachers are in for a big change to their daily routine next school year.

The eight high schools in the county's public school district that operate under a traditional schedule — seven, 50-minute classes taught daily from August to May — will be shifting in fall 2021 to a so-called "block" schedule.

The district already had block scheduling, or a variant of it, at its seven other high schools. At these, students take four, 90-minute classes that are finished in a single semester.

For teachers and students transitioning from the traditional model, it marks a sea change in how they prepare for their classes. But, district leaders argue, it could also better prepare kids for similar schedules in college.

Superintendent Burke Royster said research is inconclusive on which scheduling style is best academically, but having two different scheduling methods inside one district has created impossible logistical problems among schools and career centers.

Scott Rhymer, the assistant superintendent for high schools, said students transferring into a block-schedule school lost credits. Also, career centers and the district's Fine Arts Center, which serves all students, have had to contend with kids coming at different times.

So why hasn't the school district made this change before? 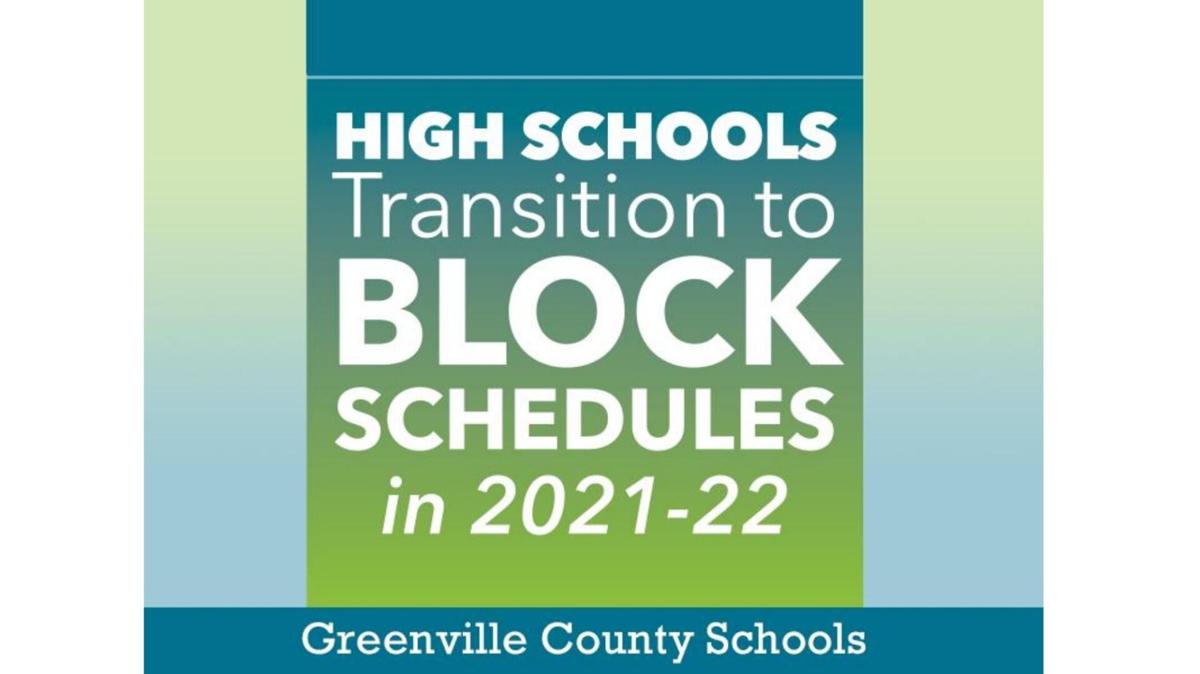 An administrative decision, teachers have known since before Halloween the scheduling change was coming. School board members heard about it from parents.

School board member Derek Lewis said he was fielded calls about students who count on yearlong AP courses to prepare them for the high-stakes college credit exams administered every May. Fine arts teachers also contacted him worried that enrollment in their courses would drop.

"I have been talking to a lot of parents from Mauldin," Lewis said.

Greenville school board newcomers see election as a mandate for change, in-person classes

Mauldin High is the district's largest school, with 2,400 students. It is on a traditional schedule along with Greenville, J.L. Mann, Hillcrest, Riverside, Eastside, Southside and Woodmont. Schools on a block schedule are Berea, Blue Ridge, Greer, Travelers Rest and Wade Hampton. Carolina and Early College are on a hybrid schedule.

Rhymer said that the coronavirus pandemic is not the direct cause of the change, but it is the reason that high-school principals, the career center directors and the head of the district's Fine Arts Center were meeting regularly for the past six months.

Shifting to a block schedule, the group concluded, would be less stressful than the reverse. Rhymer said the district would support traditional-schedule teachers with training on planning and keeping students on task for the longer class periods.

5-day attendance for secondary schools is problematic. Greenville is working on it.

School board Chairwoman Lynda Leventis-Wells agreed, speaking from her own family's experience. Her son transferred from a block-schedule school to Greenville High many years ago. He went from taking four classes simultaneously to seven.

"I thought he was going to have a breakdown," she said.

Wade Hampton High School Principal Carlos Grant said his school has worked out ways to support AP and arts courses through creative scheduling and spring refresher courses. Royster added that where taking a subject consecutively works best — like in mathematics and foreign language — kids can opt to "double block" their schedules. For example, they can finish Spanish 1 and Algebra in the first semester and finish Spanish 2 and Geometry in the second semester.