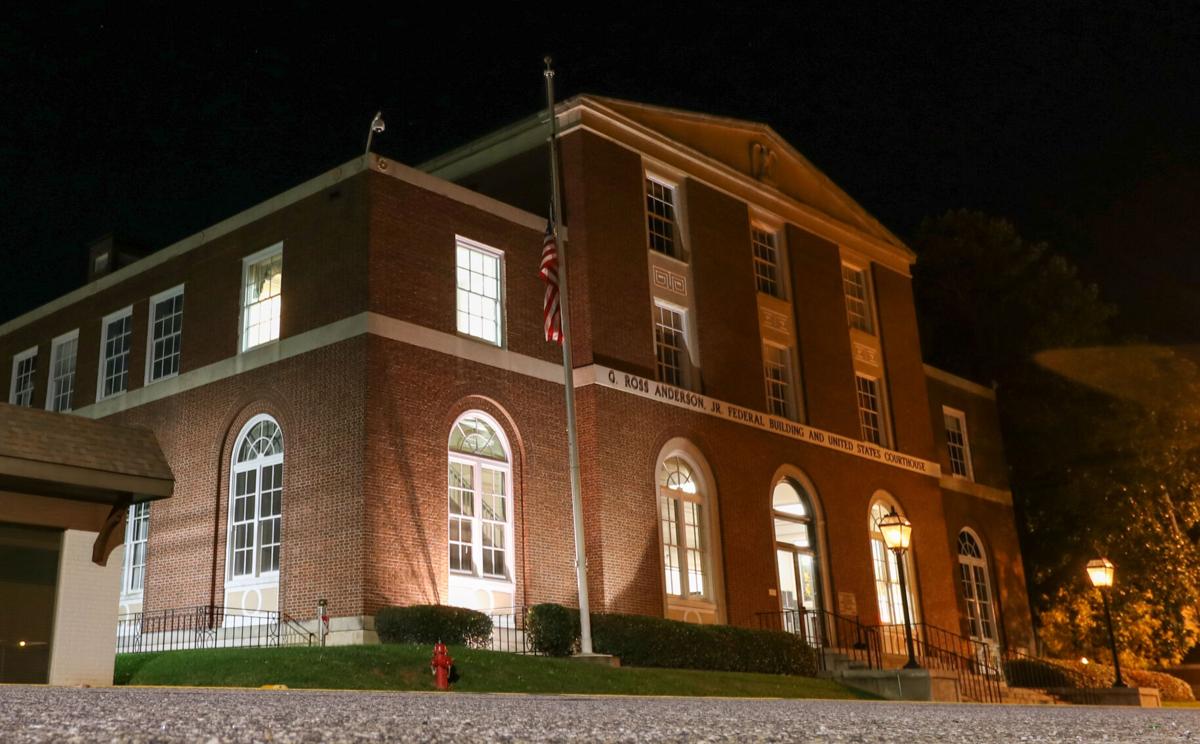 The flag in front of the G. Ross Anderson Jr. Federal Building and United States Courthouse in Anderson flies at half-staff Tuesday, Dec. 1, 2020. Anderson died last week at 91. Leaders are battling a federal plan to shutter the courthouse and another in Spartanburg. Ryan Gilchrest/Staff 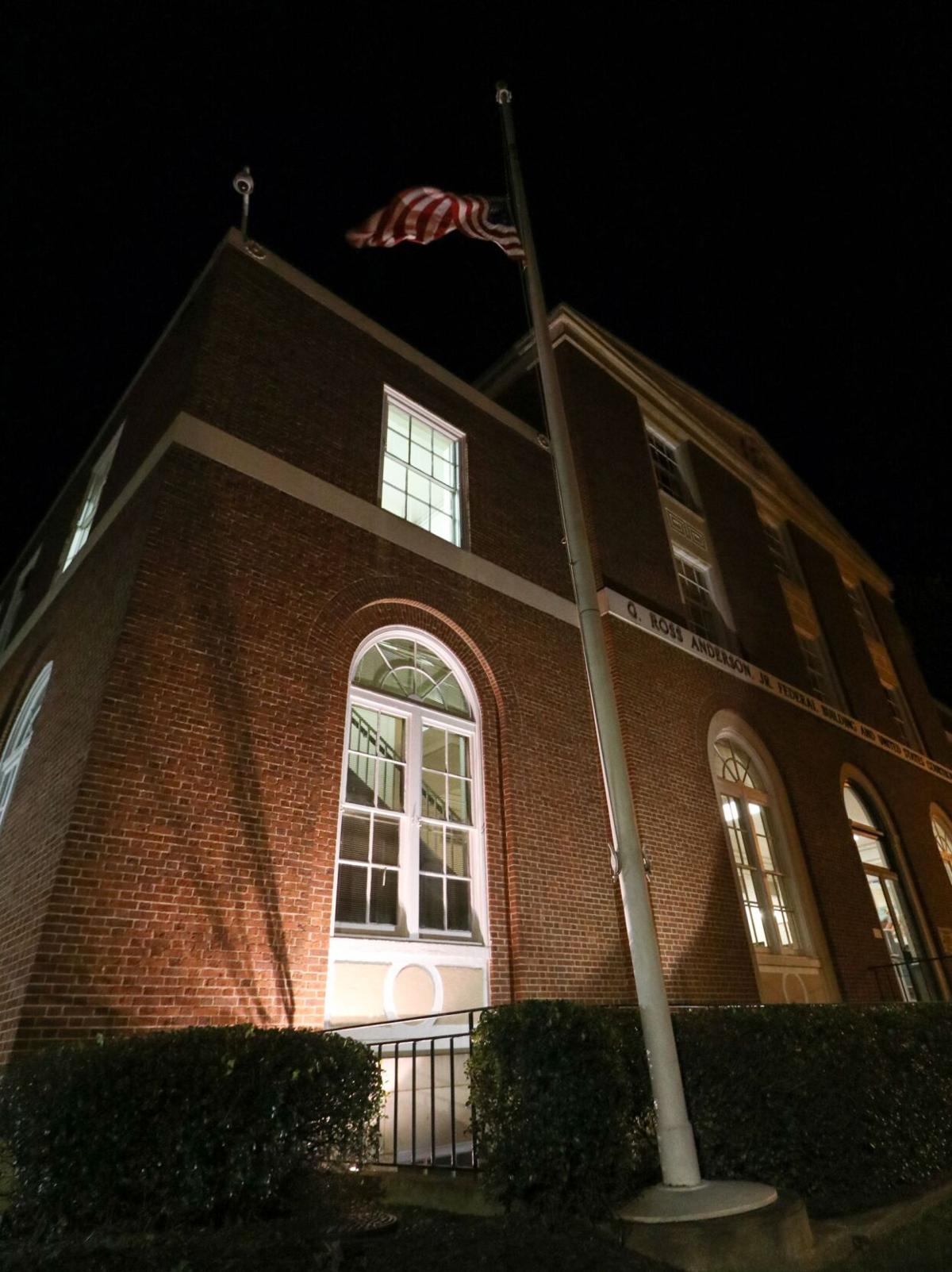 The flag in front of the G. Ross Anderson Jr. Federal Building and United States Courthouse in Anderson flies at half-staff Tuesday, Dec. 1, 2020. Anderson died last week at 91. Leaders are battling a federal plan to shutter the courthouse and another in Spartanburg. Ryan Gilchrest/Staff

ANDERSON — The renown was nationwide for the mill hill boy who as one of South Carolina's premier federal judges could have gone just about anywhere — but true to his name, stayed right at home.

District Judge G. Ross Anderson Jr. was a self-made lawyer, rising through the legal ranks on his own accord, much like he had his whole life.

On Tuesday, his life ended at the age of 91 after a long stretch of declining health.

"You just sort of had to know him to know what kind of larger-than-life figure he was," said Richard Shirley, Anderson County's Clerk of Court and former city mayor. "It's not lost on us that his last name and the name of our city is the same. It's almost like the city was named after him."

The city wasn't, but the federal courthouse downtown that he fought to keep viable bears his name.

It is part of a larger commitment to his community, which extended beyond the courtroom and into charitable endeavors, particularly health and education where he helped solidify Anderson University and regularly supported the local YMCA.

The judge, appointed by President Jimmy Carter in 1980 and serving until his retirement in 2016, was an approachable people person — but not one to be crossed.

This played out in perhaps Anderson's most memorable case as a judge: The pollution of Twelve Mile Creek, which flows into Lake Hartwell.

Through that case, three letters — PCB — were inexorably tied to his legacy.

Over the course of two decades, the owner of a former capacitor plant dumped hundreds of thousands of pounds of carcinogenic "polychlorinated biphenyl" toxins into the river at the Cateechee Mill.

Fishermen were warned that eating the fish from Hartwell could be dangerous to their health.

In 2006, Anderson heard a civil case against the company, Schlumberger Technology Corporation, and ordered the demolition of two dams that contributed to the build-up of pollutants. Three years later, Anderson excoriated the company and its lawyers for creating intentional delays.

The judge's intolerance for strings of unnecessary litigation filings typical in environmental cases and his personal concern for the waterway made cleanup happen far sooner than it otherwise would have, said Frank Holleman, head of the Southern Environmental Law Center.

Now, kayakers put in along the river north of Clemson.

"It went from being a very stagnant, polluted and unattractive waterway to a beautiful, kayak river," Holleman said. "You would think you were in the mountains rather than in the middle Piedmont. He had a dramatic impact on the environment of that area of the Upstate that will exist there forever."

One of the Upstate's most powerful legal figures, former U.S. 4th Circuit Court of Appeals Chief Judge Billy Wilkins, said he personally remembers how Anderson had been confined to a wheelchair during the case.

Anderson would have aides push his wheelchair through the woods to inspect the cleanup.

"We were talking," Wilkins said, "and he said that of all the cases he handled over the many years he'd been on the bench, he was proudest of the work he had done on this case because he was doing something that would benefit the public in general and that would last long after he was gone."

The legacy Anderson left stretched beyond his hometown.

On Tuesday, Republican U.S. Sen. Lindsey Graham, who in years past stood in Anderson's court as a Seneca lawyer, posted a message on Twitter calling Anderson "a force of nature."

"Anderson was a distinguished lawyer and served honorably and effectively on the federal bench for decades," Graham wrote.

For everything he accomplished, Anderson came from humble beginnings.

Born into the Great Depression in Anderson in 1929, he was a mill hill kid who "grew into a giant in the practice of law," said Bruce Byrholdt , who served as a law clerk under the judge and became the attorney for his estate.

While he was a hard worker, Anderson's father told his son to look beyond the mill to a higher calling, according to a judicial biography written by two other law clerks who served under him.

At age 10, Anderson took on a newspaper delivery route that he would run before dawn came and school commenced. After high school, Anderson went to Washington D.C. to work for the Federal Bureau of Investigation analyzing fingerprints.

In 1951 during the Korean War, Anderson joined the Air Force and served for two years in Delaware as a finance instructor and wing historian. It was also the year he married his wife of more than 60 years, Dorothy.

After the Air Force, Anderson opted not to stay in Washington and instead returned to his home state to graduate from the University of South Carolina's School of Law.

During his final year in law school, he ran for the state House of Representatives and served one term before entering into his own private practice, which over time allowed him to build a reputation as a fierce trial lawyer.

Hayne Hipp, Greenville businessman and philanthropist, has died at age 80

Anderson remained in private practice up until President Carter appointed him to the judgeship at the recommendation of U.S. Sen. Ernest "Fritz" Hollings.

The judge worked full-time until stepping down in 2009 to enter part-time senior status and allow President Barack Obama to appoint his replacement.

Investors, who were mostly Upstate retirees, lost $278 million as multiple principals in the scheme were convicted of fraud. Anderson oversaw the civil settlement, which left investors with pennies on the dollar to recover.

The losses by retirees saddened him because he grew up poor, built up a career and could imagine the pain of losing it all, Byrholdt said. The judge was firm but at heart a people person.

"He always told me, 'Take care of what you worked hard for," Byrholdt said.

In 2014, Anderson lost his wife. He spent his final years in the Clemson Downs retirement home.

For some time, the judge's health had been declining. Because of the health restrictions imposed to prevent the spread of COVID-19, Anderson passed away without the presence of friends and family.

Come springtime, he was to become a great-grandfather. While saddened not be able to be with him, Byrholdt said the judge is at now at peace and at rest with his wife.

"He's in a much better place," he said. "He's now with Dot. Hopefully there's no more pain and suffering in his life."