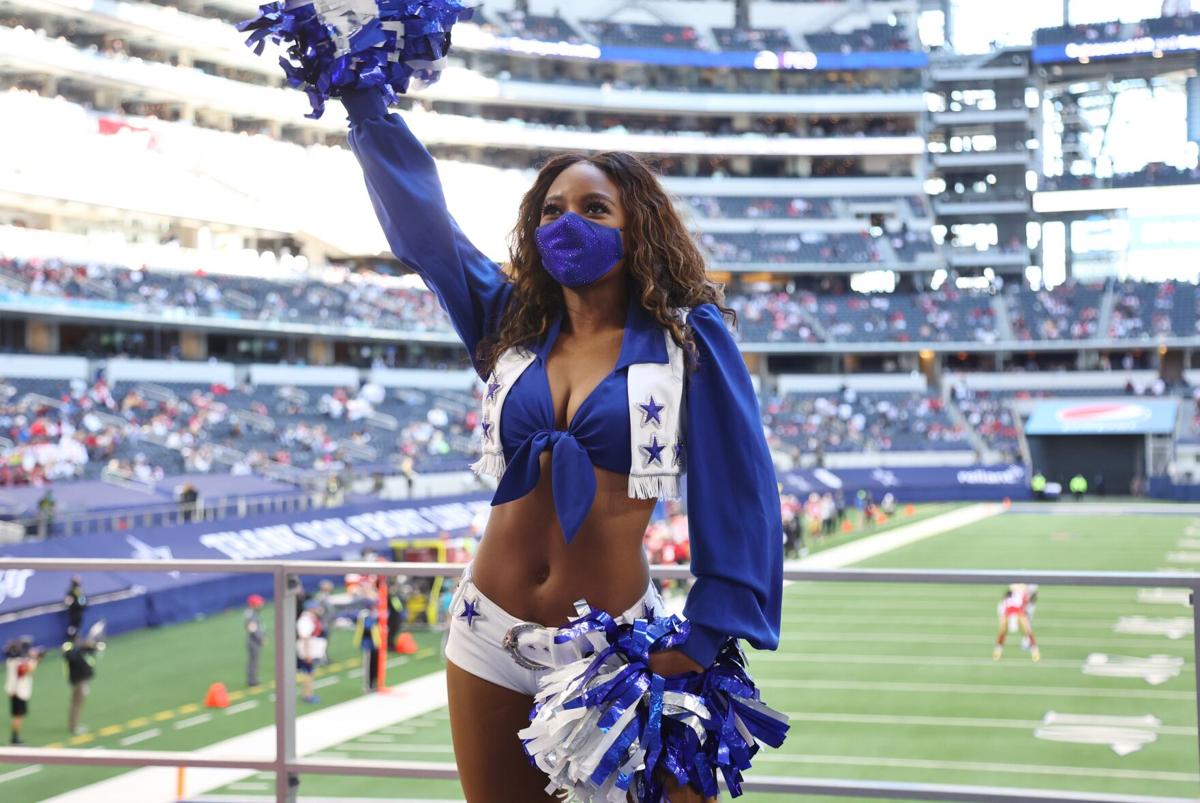 Armani Latimer cheers on a stage at the home team's end zone during the Dallas Cowboys game against the 49ers on Sunday, Dec. 20, 2020, at AT&T Stadium in Dallas. The women were not able to perform on the field this past season because of restrictions during the ongoing coronavirus pandemic. 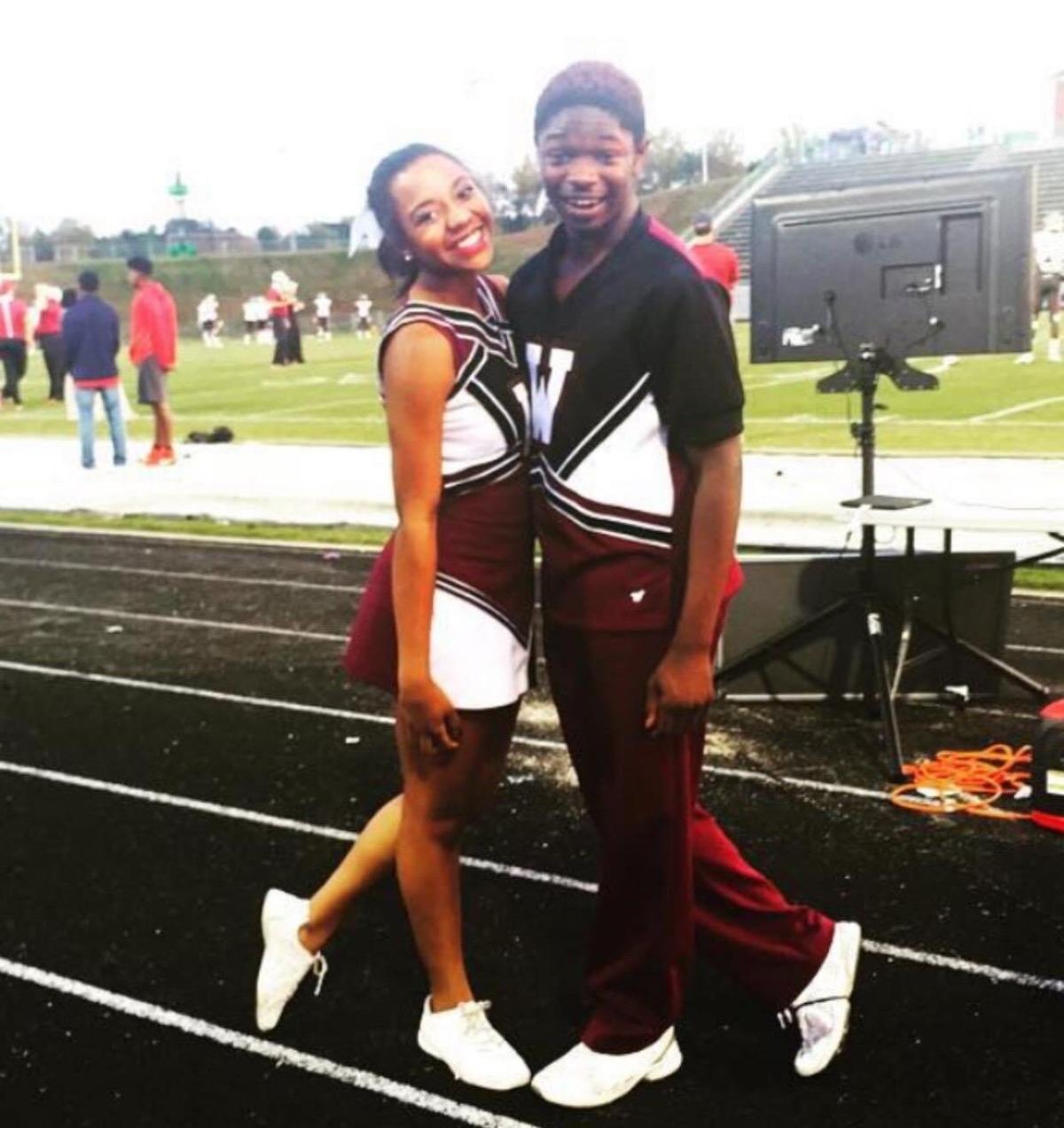 Armani Latimer, left, and Ethan Dumas pose in this undated photo from their days as Westside High School cheerleaders in Anderson, S.C. Latimer, who graduated in 2016 and was crowned Miss Westside, went on to join the dance team at University of South Carolina and this year earned a rare spot on the Dallas Cowboy Cheerleaders squad, something she said she has been dreaming of since middle school. 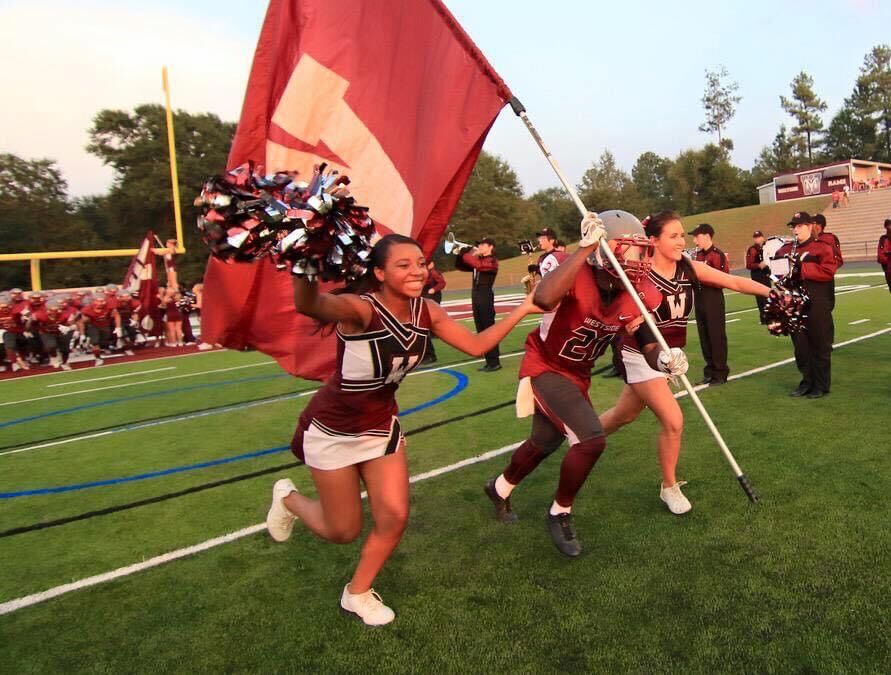 In this undated photo, Westside High School cheerleader Armani Latimer runs onto the field with her teammates. Now 23, Latimer this year auditioned for and made it onto the Dallas Cowboys Cheerleading squad. Her experience was chronicled in the 2020-2021 season of Making the Team on the CMT Network. 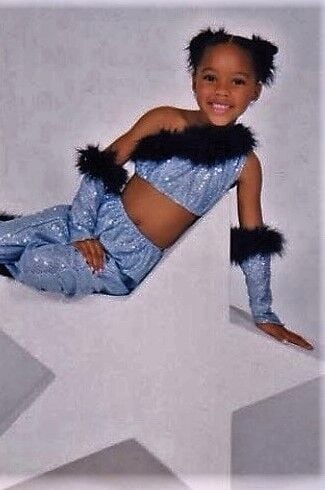 Dallas Cowboys Cheerleader Armani Latimer, 23, of Anderson started taking dance lessons at age 3 and started dancing competitively at age 4. A Jan. 12, 2021, episode of "Making the Team" on the CMT network featured her journey this past summer toward making the Dallas squad. 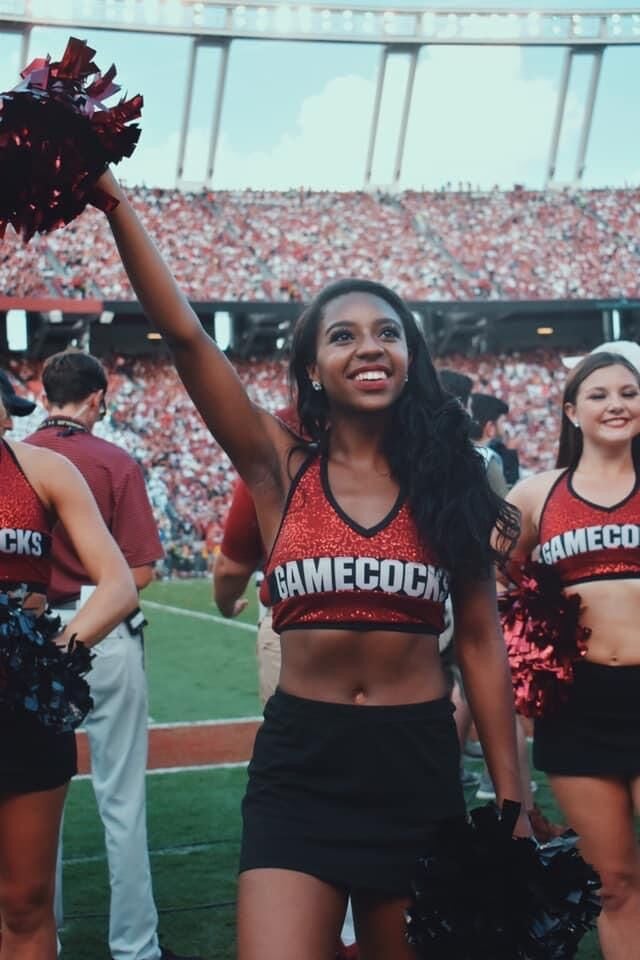 In this undated photo, Dallas Cowboys Cheerleader Armani Latimer performs with the Carolina Dance Team during a football game at the University of South Carolina. Latimer, who graduated in 2020 and is now 23, learned this past summer that she had been picked to cheer for the NFL franchise.

Earning a spot on the varsity cheerleading squad at Westside High School, becoming captain, being named Miss Westside, going on to join the Carolina Dance Team at the University of South Carolina, rising to captain, and then, months after graduating, landing a spot among the Dallas Cowboy Cheerleaders.

"I get to watch my team play from the sidelines," Latimer said by video chat from Dallas this week, "and I get to do what I love."

Over the years, though, the 23-year-old Anderson native has pushed through challenges, any one of which could have stopped her — a father in the U.S. Army deployed for months at a time, a dance instructor who told her she wouldn't make it, an injury in high school that sidelined her for a year, another year deferred from her college dance team, and a pandemic that shortened training camp and almost scuttled this year's NFL cheerleading season.

Latimer was featured along with about 50 other would-be professional cheerleaders this winter in the eight-episode reality TV series "Making the Team," a CMT Network show currently in its 15th season about the grueling annual formation of the Cowboys cheer squad. Most of the 36-member squad are returning veterans, but each year a handful of rookies make the squad, some of them bumping veterans to get there.

This year's finale aired on Jan. 12 and Armani was on it, having earned one of 11 rookie spots. She was among 20 rookie finalists, themselves chosen from 1,500 applicants who submitted audition tapes last summer.

Denise Scalfe, the mother of one of Latimer's friends since high school, said she has known as long as she can remember that Latimer wanted to be a Dallas Cowboys Cheerleader.

Latimer is a rarity. Dancing professionally — because that's what NFL cheerleaders do — was the realization of 20 years' work. Hours of dance rehearsals every day — ballet, jazz, tap, hip hop. A commitment to form and fitness, and a three-dimensional photographic memory in motion.

Ethan Dumas, who studies dance at Coker University in Hartsville, has known Latimer since they cheered together at Westside. Watch her spin, he said, the toes of her left foot planted, her leg extending upwards perfectly straight, her body turning, her right leg bent gracefully at the knee. And a huge smile on her face, a joy conveyed after years on South Carolina's pageant and cheerleading circuits.

"We've always known her as dancing Armani," Dumas said. "She can do six a la secondes. That's skill."

Latimer was a middle-school student in Anderson the first time she saw dancers on TV competing for a spot on the Dallas Cowboys cheerleading squad.

Latimer's mother, a former math teacher at Southwood Academy of the Arts in Anderson School District 5, said she leveled with her daughter when her little girl shared her dreams of dancing professionally. Rhoda Latimer is currently at Clemson University, teaching and working on a doctoral dissertation on the shortage of Black math teachers in America.

"We've had conversations since she was younger about the dance world," Rhoda Latimer said. "About being a Black girl in the dance world. And about the inequities and the unfairness. And how you have to dance twice as hard to prove you are equally as good and sometimes that you are half as good."

Growing up in Anderson, Latimer and her two little brothers rode everywhere with their mom for sports, church and music activities. They changed in the car and did their homework in the stands. Latimer played viola, danced and sang for the church's praise team and joined chorus at school. She cried when she didn't earn A's and helped her mom keep up with the boys.

"My kids can try whatever they want," Rhoda Latimer said. "They just can't quit in the middle of the season."

In high school, Latimer considered applying to the South Carolina Governor's School of Arts and Humanities in Greenville.

Her mother remembers it a little differently.

"Her dance teacher lit into her," Rhoda Latimer said. "He said, 'I have students who are there and if this is something you want to do, you need to get serious. You aren't going to make it.'"

He berated her, she said, because she was a cheerleader.

Latimer stayed at Westside, let herself heal from a growth injury, found a new studio to dance with and set her sights on USC. Denied on her first try, she was instead admitted to the university's Gateway program at a local technical college her freshman year. This meant she wasn't eligible for the dance team.

So she enrolled in classes at a studio owned by the South Carolina Dance Team's coach.

"I made sure she saw my face and all my hard work," Latimer said. "She was so excited when I turned out for tryouts. She had pushed me a littler harder in the classes."

Latimer graduated from USC this past summer with a degree in criminal justice. Then she filmed an audition tape for the Dallas Cowboys. Beaming and kicking high, she spins and tosses her hair with a whip of her neck — something she calls "hair-ography." Dallas liked what it saw and asked her for another tape — this one of her doing a Cowboys "kick line" and signature dance routine. After that was a four-minute video interview.

By summer's end, Latimer learned she was one of 20 women who earned a spot in training camp. Because of the pandemic, camp was abbreviated from three months to 16 days, and all 20 rookie finalists had to live and train in a quarantine bubble. Candidates slept in rooms by themselves and had no face-to-face contact with each other outside of rehearsals.

"Luckily we did get the choreography of some of the dances before training camp," Latimer said. "I really just believe this class was so determined to make sure we put our best foot forward because we only had two and a half weeks. It's crazy."

On the 16th day of training camp, the women learned who made the squad. Before the day was over, they were handed their uniforms and the rookies danced in cowboy boots for the first time. They recorded a routine on the field that same day — the routine that Dallas fans watched all year on the Jumbotron.

They had two hours to rehearse.

Cowboys cheerleaders will, in a typical year, do multiple charity appearances and USO performances.

Dumas, himself a cheerleading teacher with Varsity Spirit — a national chain of cheering schools — described cheerleaders as "ambassadors of the community." Two years younger than Latimer, he said she used to take him home after every practice, no questions asked.

"She doesn't like to ask for help because she's always the one wanting to help," Rhoda Latimer said of her daughter.

Though the show did not capture it, Latimer has been dancing with the Dallas squad on a concrete stage behind the end zone at home games since October. Because of coronavirus restrictions this year, the cheerleaders have not had access to the field.

"No dancer is ever excited to dance on concrete," Latimer said, "but I will say just getting the opportunity in general to be able to perform inside AT&T Stadium in a Dallas Cowboys Cheerleading uniform is amazing. They could have told me I was dancing in the parking lot, I would have been OK with that."

NFL cheerleading is not a long-term career. Most women spend two or three years at it. The longest tenures are five or six years. The pay is not high — one high-profile lawsuit in recent years revealed Dallas cheerleaders were earning just over minimum wage and claimed they sometimes earned less when the per diem didn't quite cover long, out-of-town appearances.

Latimer works full-time at a law firm during the week and will earn her paralegal certification this year, she said. She trains a few hours a day, splitting up sets in the morning and at night.

Her co-workers love that she is a Dallas Cowboys Cheerleader, she said. She answers their questions and spends nights preparing for the LSAT.

"I think with her, she's probably already planning the next big goal," her mother said.