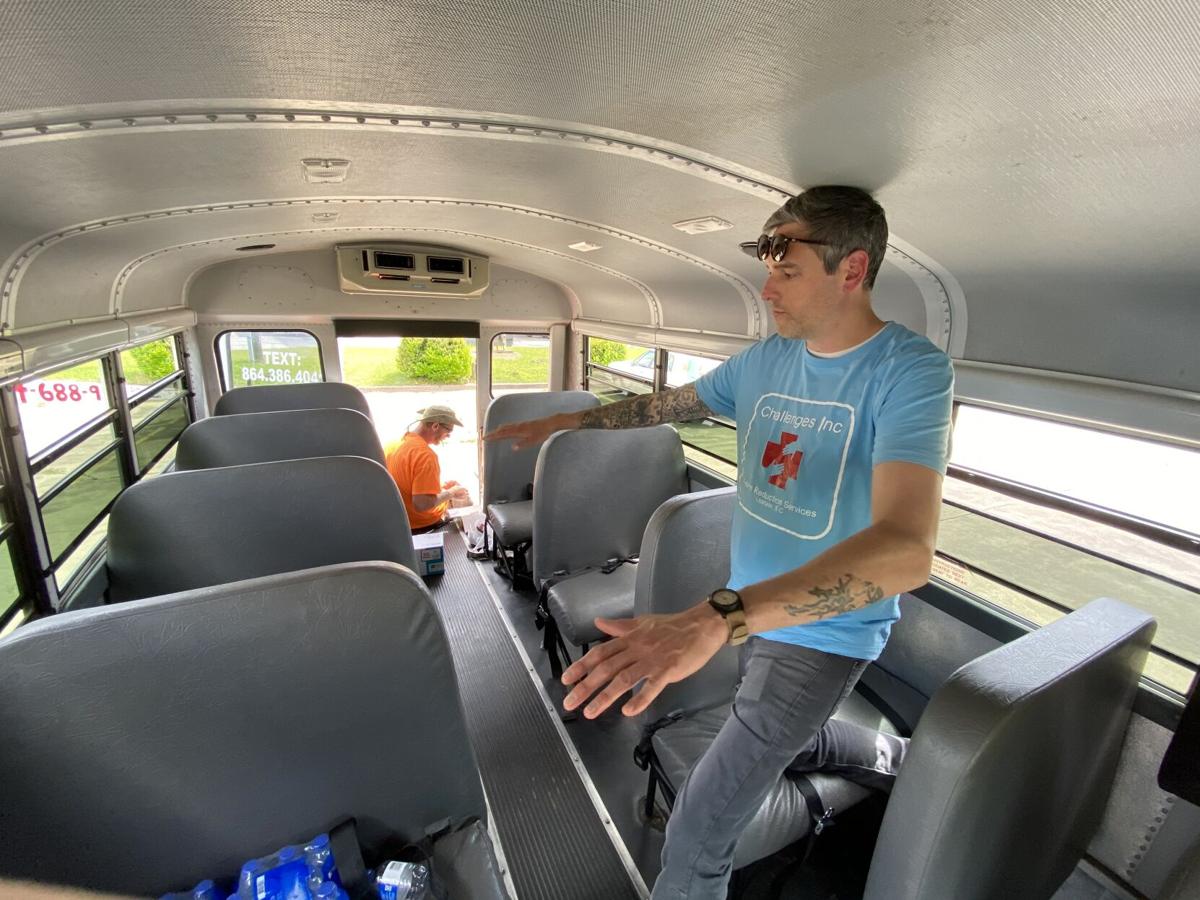 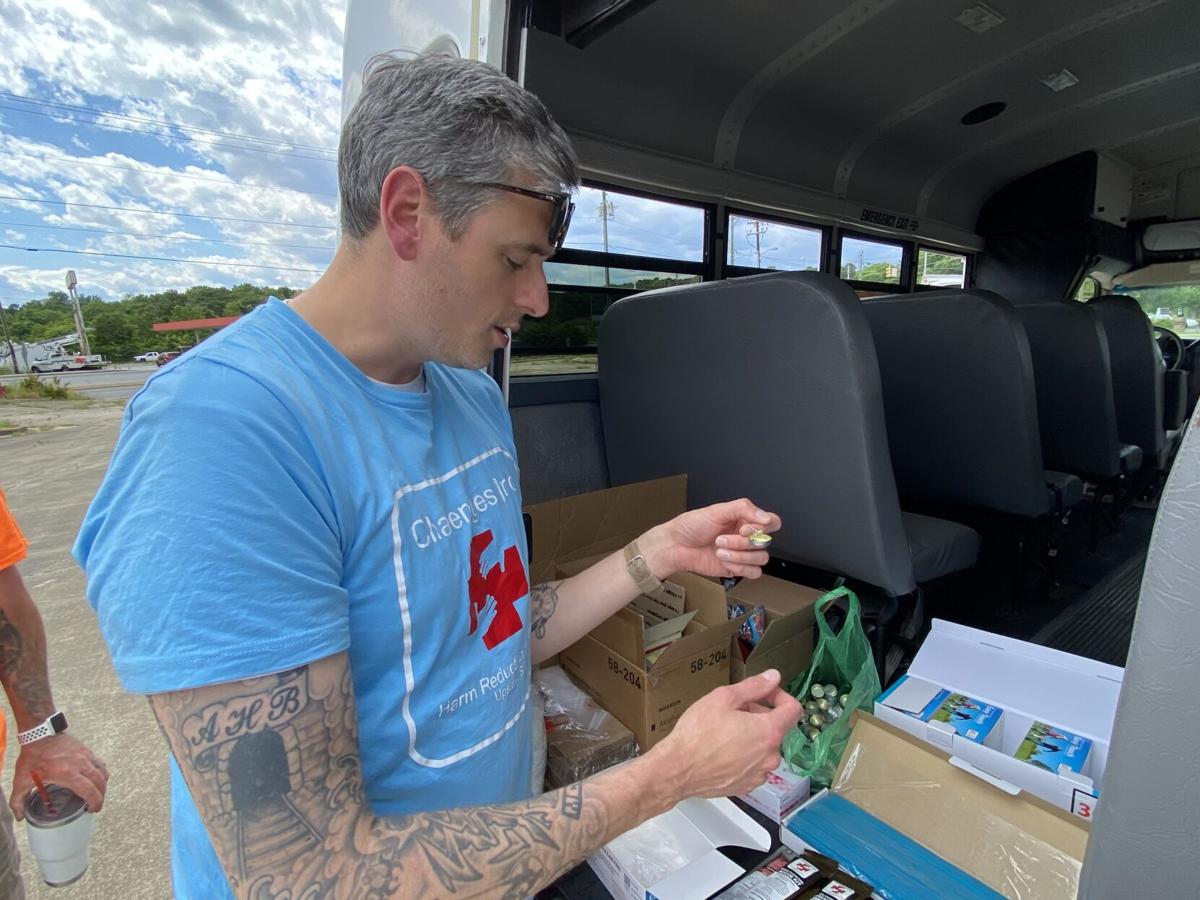 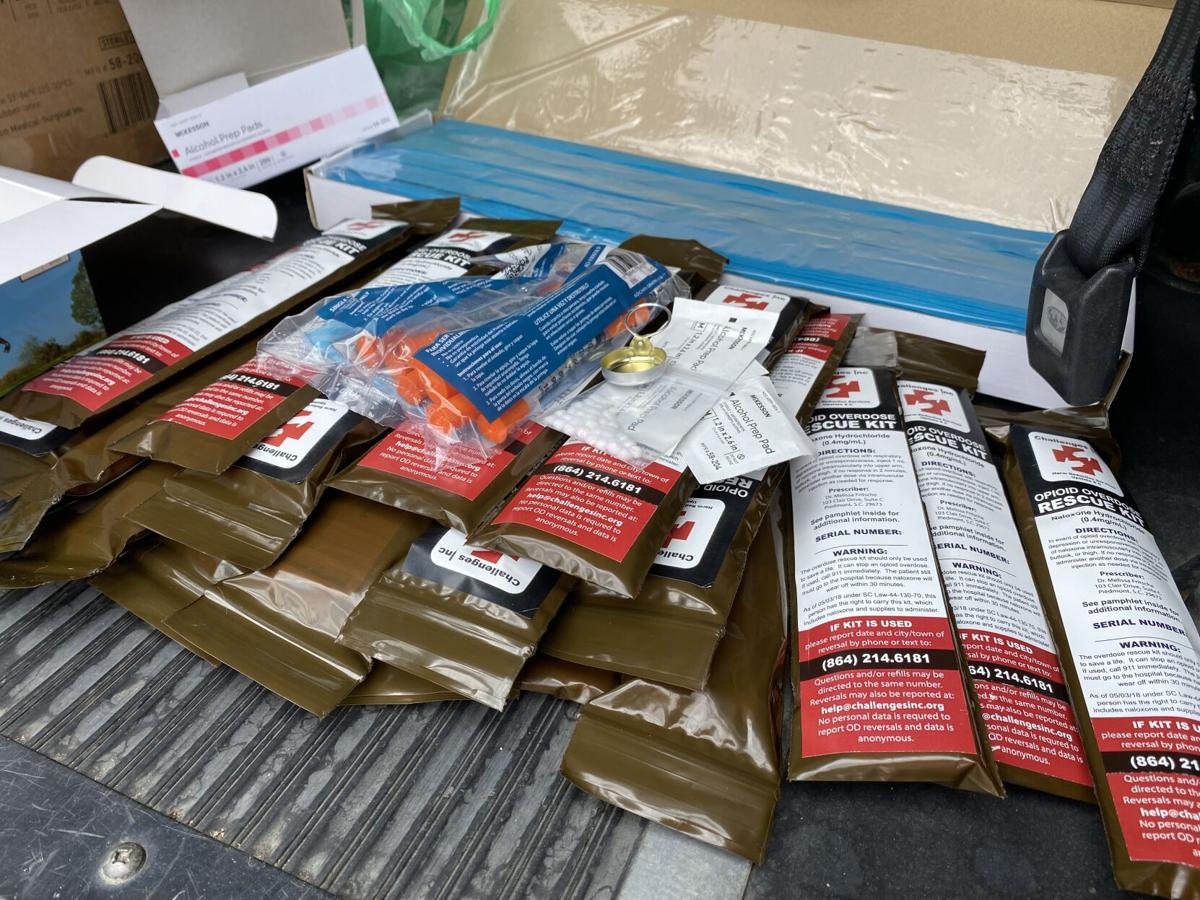 Packages of naloxone sit in the back of Challenges Inc.'s new mobile unit. Conor Hughes/Staff

GREENVILLE — On its first day of operation, the Challenges Inc. mobile unit was parked in a disused lot between an extended stay motel and a gas station just south of Greenville. Tangles of weeds sprouted from fissures in the faded asphalt around the bus. Cars sped by a few yards away on Augusta Road.

The location struck the fine balance between visibility and discretion that founder Marc Burrows said is a constant consideration for the harm reduction nonprofit. Too noticeable and the drug users the organization serves may be wary of approaching. Too discreet and they won't be able to find it.

Boxes of clean syringes, cotton balls, fentanyl detection strips and the overdose reversal drug naloxone were in the back of the bus. Burrows and the volunteers who joined him hoped to get the lifesaving supplies into the hands of those in the throes of addiction.

Gas stations are overdose hot spots. An Upstate nonprofit is equipping some with naloxone.

The area where the bus sat is known as District 25, or simply the district. Challenges Inc. often delivers supplies to the nearby motel, one of many within a mile or two that serve as hotbeds for drug use.

Burrows said the mobile unit expands access to those who need it but are unable or unwilling to drive to the nonprofit's offices in Powdersville.

"The idea is just making it more accessible," he said.

The Phoenix Center, a Greenville-based addiction treatment center, donated the bus to Challenges Inc. earlier this year. Burrows hopes it will raise awareness for the organization, the largest community distributor of naloxone in the state and South Carolina's only harm reduction organization, focusing on making drug use as safe as possible. The bus will be used to offer a safe place for more people to seek help, and possibly open up partnership opportunities with other nonprofits such as food banks or recovery centers.

On the mobile unit's first day out, Maurice Adair of AID Upstate set up a table outside and offered instant testing for diseases associated with intravenous drug use, such as HIV and hepatitis C.

The inside of the bus is lined with the rows of black seats one would expect to find in a repurposed school bus. Burrows said he plans to replace them with seating areas and tables where Adair could do his tests or addiction counselors could meet with users. He might put a couch along one wall.

"I want to make like a little chill space," he said.

Traffic was slow the first day as volunteers waited by the bus, but Burrows wasn't concerned. The bus will be in the same place, at the same time, every week for the foreseeable future. It will take time for users to learn that it is there, and likely longer to trust they can approach without fear of being arrested.

As one man walked away with a bag of naloxone and condoms, Burrows yelled: "We'll be here every Friday afternoon."

Before the bus, Burrows and other volunteers distributed supplies out of the back of their cars. They learned that with a little patience and consistency the people will come.

When passersby approached the back of the bus, Kris Stepp talked to them and asked what they needed. He wore a bright orange T-shirt with the words "I Have Narcan" emblazoned on the front in bold letters. The bus is unofficially named Jessie May, after Stepp's daughter. She died of an overdose last year in a Columbia motel. He wishes someone with her had naloxone.

"You don't get a second chance if you're dead," he said. "If you overdose 40 times and you're saved 40 times, you might get clean that next time. It doesn't happen if you're dead."

By the end of the afternoon, Challenges Inc. had handed supplies to just a few people.

But it was a start.