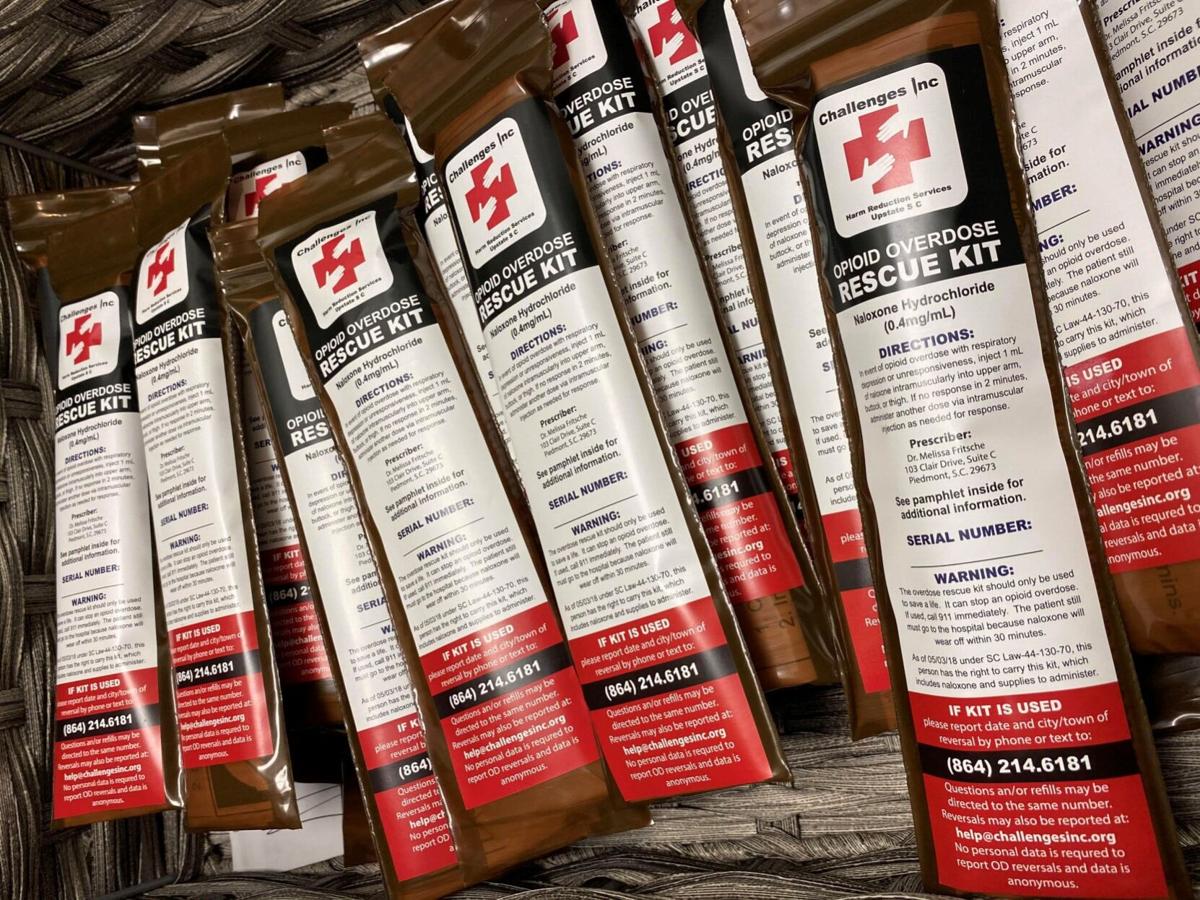 Opioid overdose rescue kits, which include two doses of naloxone and the two syringes used to administer the overdose reversal drug, sit in a container at Challenge Inc.'s office in Piedmont. Provided/Marc Burrows 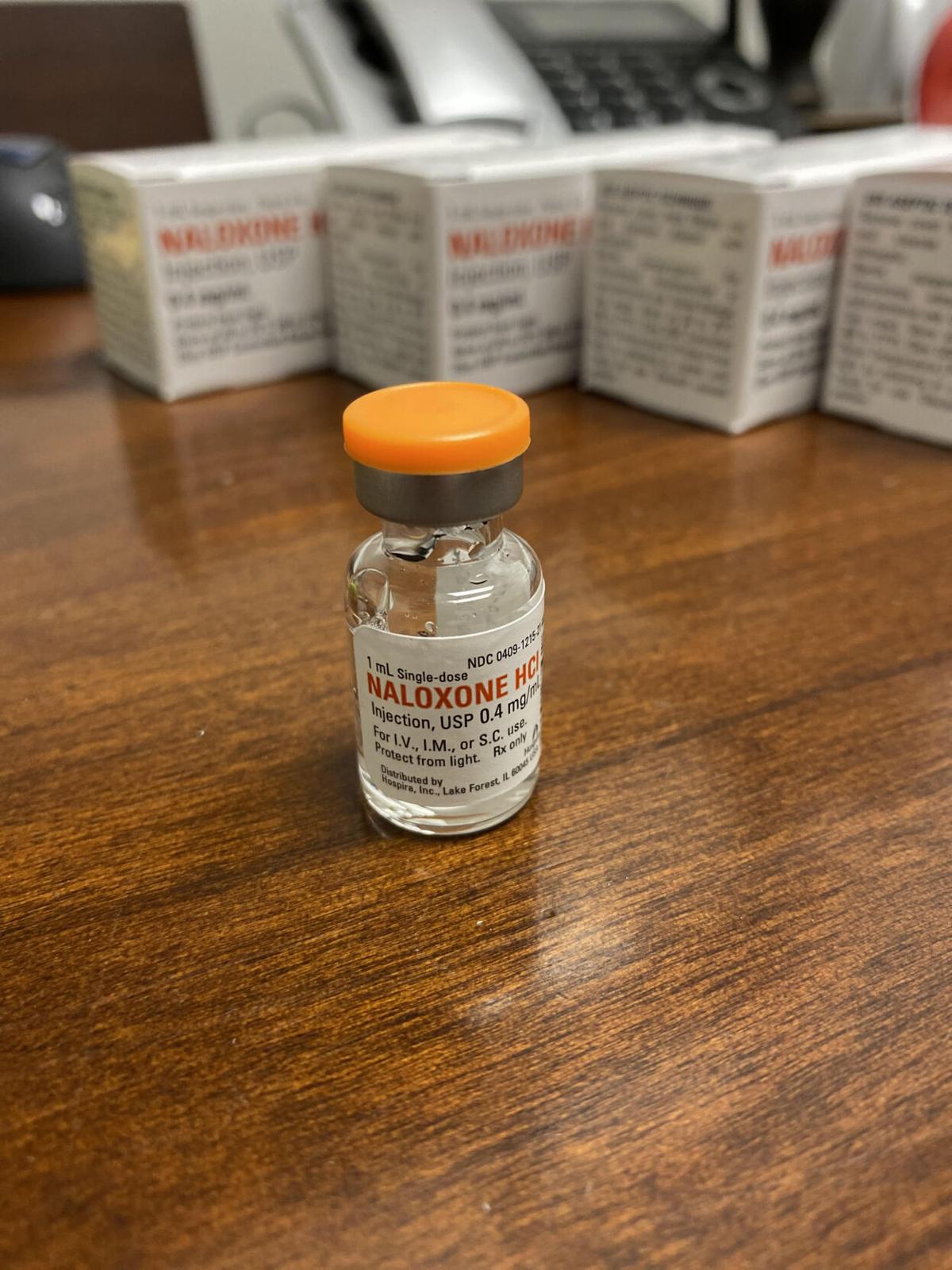 Challenge Inc., South Carolina's largest community distributor of naloxone, is struggling to keep the overdose reversal drugs on the shelf as demand surges during the pandemic. Provided/Marc Burrows

Sitting on his couch at home or during lulls at work, Marc Burrows pulls out a cardboard box full of small, glass vials. He takes the bottles out two at a time and slips them into brown plastic bags with a pair a syringes.

On each of the orange-capped containers, there's a word written in bold, capitalized letters: Naloxone.

The drug reverses the effects of opiate overdoses and has become a life-saving tool in the ongoing opioid epidemic. Burrow's organization, Challenges Inc., is the largest community distributor of Naloxone in the state, and the entire organization — from Burrows, to the receptionist, to area volunteers — chips in to help package the doses to make them ready for the people the nonprofit serves.

In Greenville, he's running the state's only needle exchange out of his trunk

It's a mundane task that has taken on a new urgency in recent months. As the coronavirus pandemic rages on — heightening isolation, destroying livelihoods and worsening anxiety and other mental health struggles — the demand for naloxone, commonly referred to by the brand name NARCAN, has increased significantly.

In fact, for Challenges Inc., it's quadrupled.

Where the nonprofit previously gave out about 250 doses every month, it now averages about 1,000 a month.

"I have never seen anything like this," Burrows said.

According to the state Department of Health and Environmental Control, likely opioid overdoses were up 50 percent as of May compared to the same period last year, an increase the agency attributed to the pandemic. And data from the the Greenville County Coroner's Office shows overdose deaths in the county are up compared to the three previous years, with 118 recorded between Jan. 1 and Aug. 27.

From beginning of 2020 to October, Challenges Inc. recorded 121 instances of someone using naloxone the nonprofit gave them to reverse an overdose, more than double the number from all of last year.

Its also becoming more common for the same people to use the overdose drug multiple times in a short period of time as fentanyl, a highly potent opioid, is mixed with other drugs like heroin, meth and cocaine more frequently, Burrows said.

Challenges Inc. is a harm reduction nonprofit, meaning it provides resources such as naloxone and clean needles to people struggling with addiction to mitigate the risks of their drug use. It's an approach backed up by a wide body of research that shows it saves lives.

Burrows, who used heroin for 10 years and has been sober for just as long, started the program in 2017, the only one of its kind in South Carolina. He said in the years since, he and the other staff with the nonprofit have had to consistently encourage often reluctant clients to take doses of naloxone with them when they came in for other services.

That's changed since the pandemic.

"You can sense a fear, a level of desperation of just, 'Please we need Narcan and we need a lot of it. And if you have extra I'll take extra, because I have friends who want it,'" Burrows said.

While before the pandemic, Challenges Inc. was pushing its clients to take the overdose drug, now the nonprofit is struggling to keep it on the shelves.

Last week, the organization received a shipment of 1,000 doses and by Monday, only 500 were left. And those that remained were already accounted for and just waiting to be packaged before they were meted out.

The week before the most recent shipment came in, Challenges Inc. ran out entirely, an occurrence that's becoming more common every month. Burrows said it's difficult to tell someone in need that the supply is gone when a dose of the drug could mean the difference between life and death.