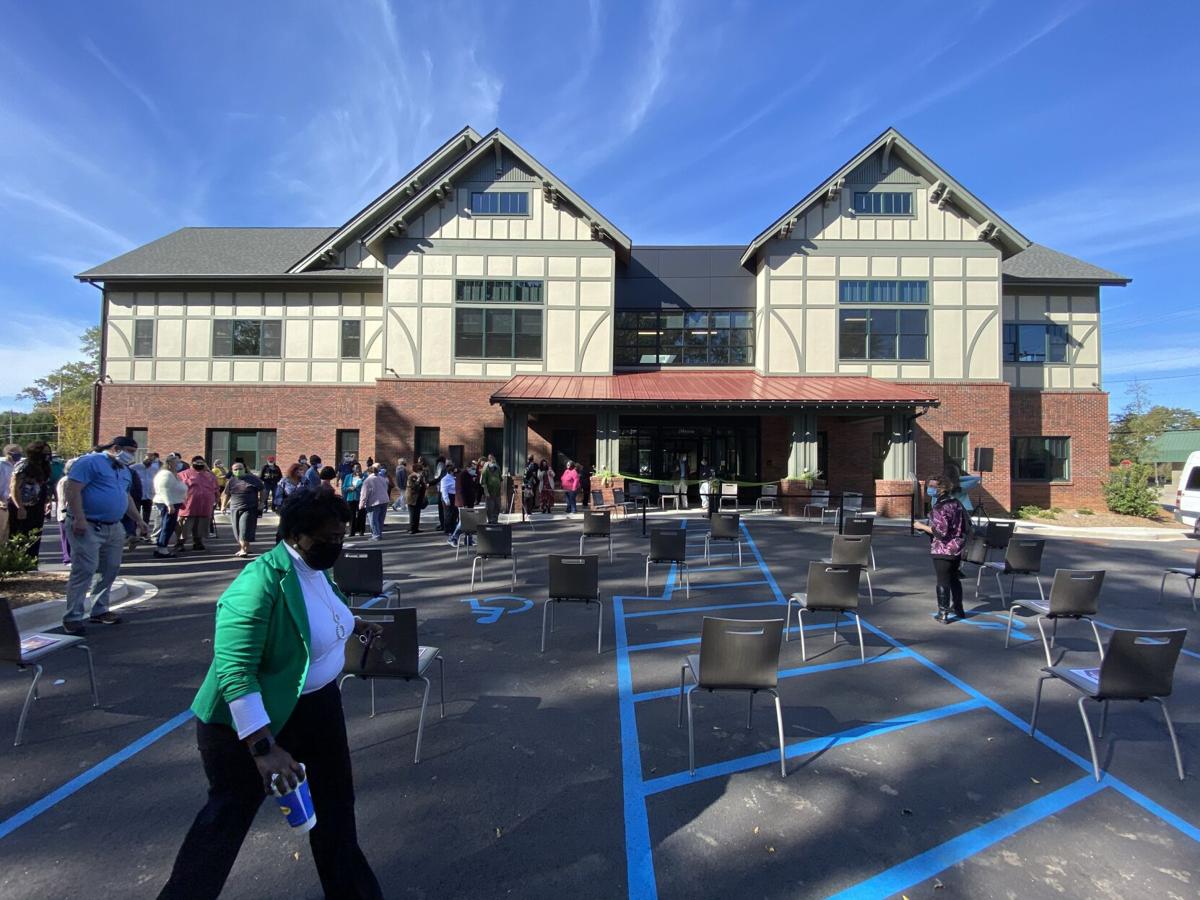 Friends, donors and service recipients of Greenville's Gateway House prepare for a dedication ceremony on Friday, Nov. 6, 2020, of the organization's new, $6.1 million "clubhouse" facility on Croft Street near downtown Greenville. The building is committed to daytime care for Greenville's mentally ill. 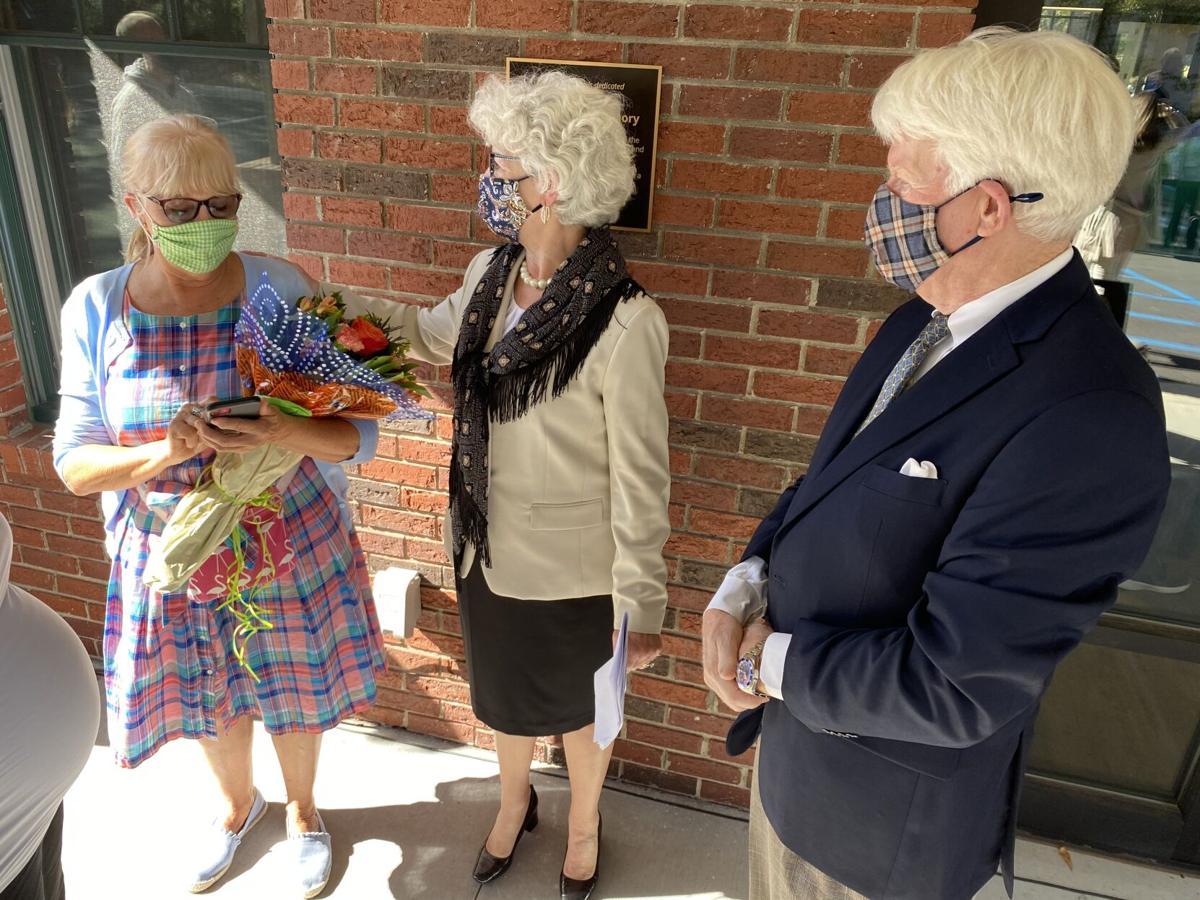 From left, Nancy Emory, Marian Carpenter and Fred Carpenter speak after a dedication ceremony on Friday, Nov. 6, 2020, of the Gateway House's new, $6.1 million "clubhouse" facility on Croft Street near downtown Greenville. Emory retired from running the house with her husband, Phil, in 2017, and the new building was dedicated to them. The Carpenters helped raise money for it. 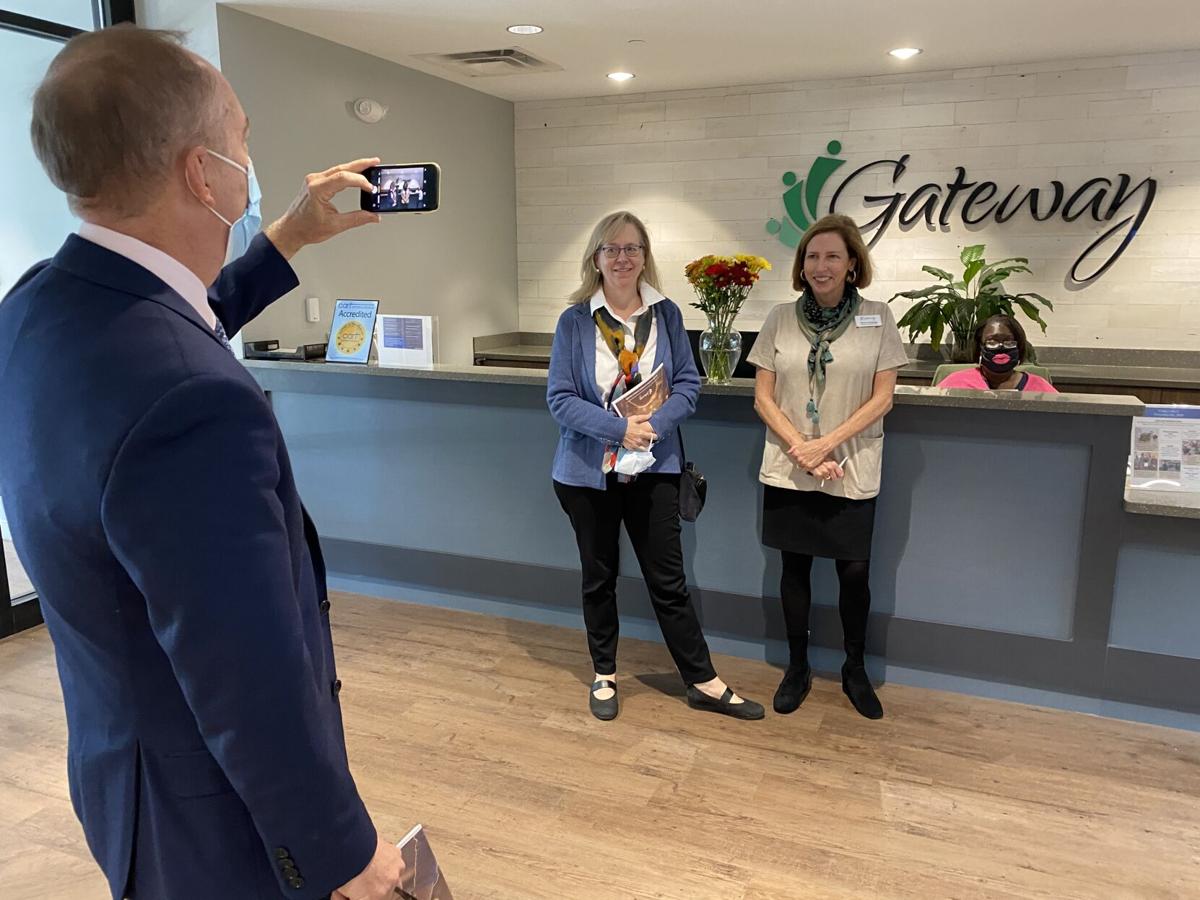 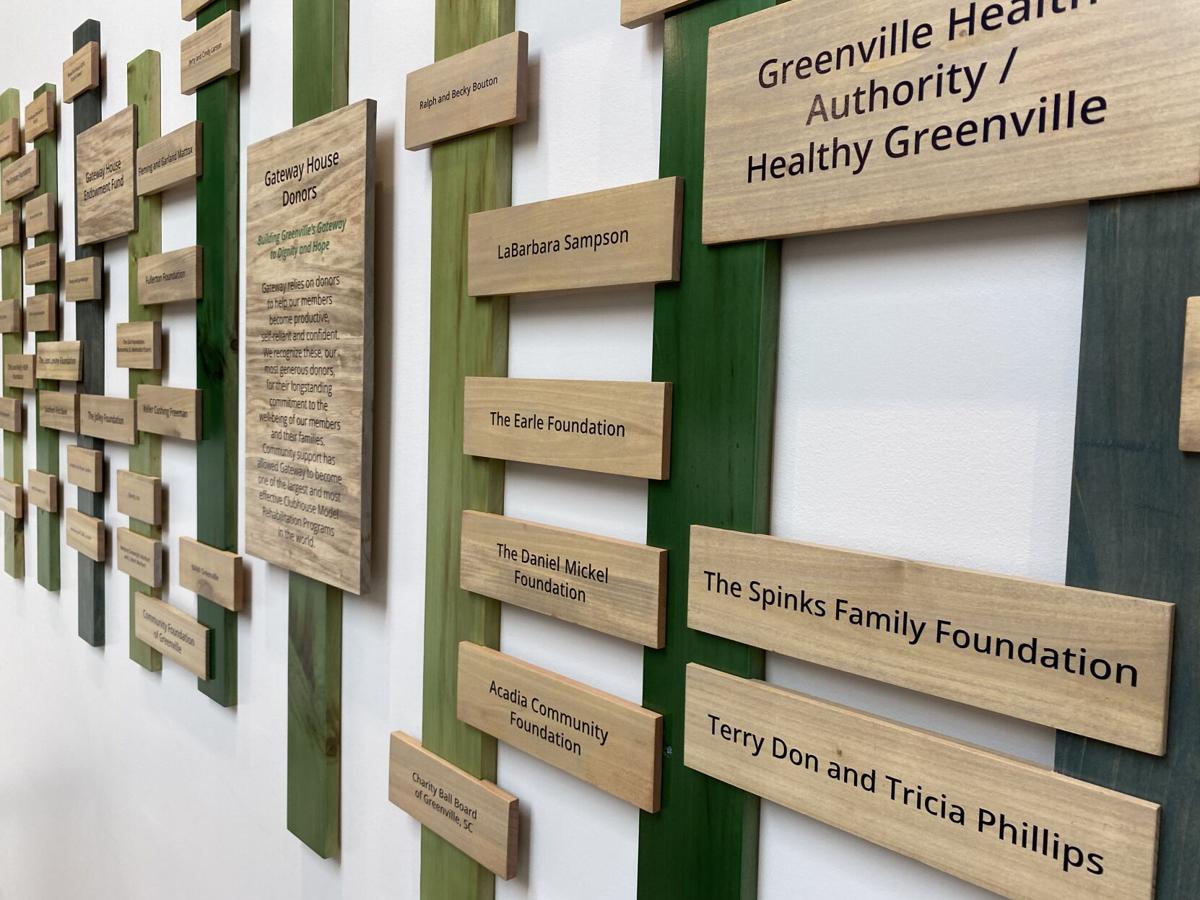 A wall of names at Greenville's Gateway House highlights the 164 people and organizations who gave money to the "From Shadows to Light" capital campaign that raised $6.1 million for the organization's new clubhouse on Croft Street near downtown Greenville. The 20,000-square-foot, Tudor-style building is committed to daytime care for Greenville's mentally ill. 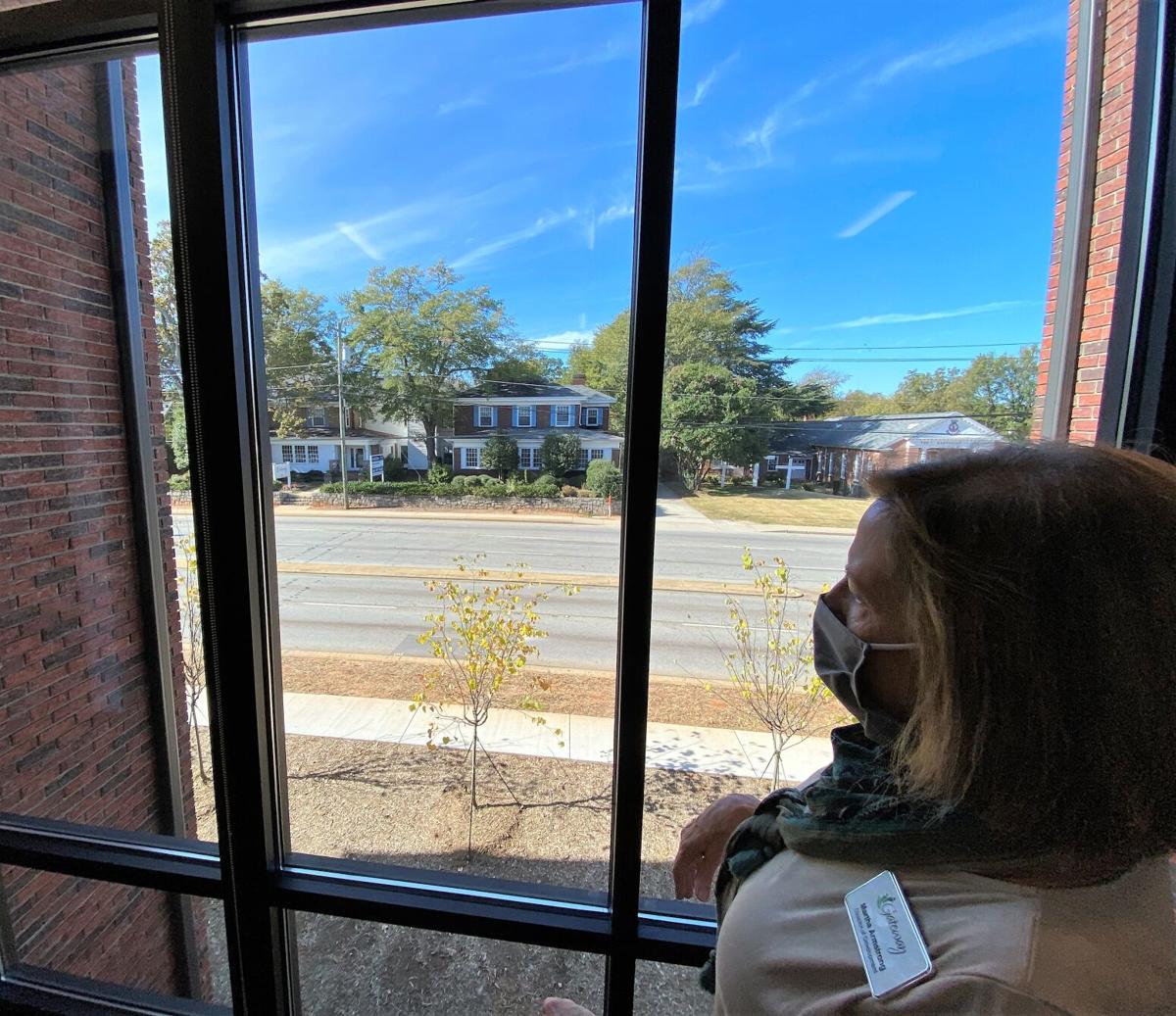 Gateway House Director of Development Martha Armstrong looks out the window of the organization's new facility at Croft and Rutherford streets near downtown Greenville on Friday, Nov. 6, 2020. Directly across the street is Gateway's old facility, which could serve about 100 people a day. The new building will serve at least 200. Gateway is is committed to daytime care for Greenville's mentally ill.

He gets a hot lunch there.

He has jobs to do.

Wnuk suffers from severe mental illness. But with the help of the people at Gateway, he prefers to call it "Mental Chillness."

"This place makes me so happy," he said. "Everybody's my friend here."

On Friday, Wnuk stood in a parking lot outside with about 75 other people on hand for the dedication of Gateway's new house at Croft and Rutherford streets near downtown Greenville. It is a 20,000-square-foot building made possible through the private donations of 164 people and organizations. They raised $6.1 million over three years.

On Friday the new facility was dedicated to Paula and Phil Emory, who ran the organization for 34 years until their retirement in 2017.

With the new space, Gateway will be able to double the number of people it serves.

Open daily from 8:30 a.m. to 4:30 p.m., Gateway organizes its "members" — people receiving services there — into occupational "units." One group makes lunch; another manages cash at the snack bar and in-house bank; a third creates daily news casts about the latest goings on at Gateway, nutrition tips or milestones; and a fourth does community outreach. Gateway also organizes jobs for some of its members with employers in the area, setting up in-house training and making sure a substitute is ready to step in if a Gateway member can't report to duty.

Gateway member Amy Secrist, dressed in a white blouse, black Halloween-themed tie and black business slacks, persuaded a Post and Courier reporter to be part of her newscast on Friday.

"Just stand in front of the green screen," she said, and flicked on a camera.

Most people pick a unit they like and if they stick around Gateway for a few years might move on to another, said Tiffany Webb, a rehab specialist at Gateway. Led by Executive Director Randy Redlinger, about 20 rehabilitation specialists and administrative staff keep services going.

"Now we have the meeting space to accommodate extra units," Armstrong added.

The organization also manages 72 apartments for members and provides transportation for those who cannot drive. Wnuk lives in one, affording him independence from his parents, who live in Florida.

Natural light infuses the Tudor-style building's dining hall, an homage with vaulted ceilings and chandeliers to something out of 16th Century England. The idea at Gateway is to create a space of "opulence, beauty and finery" for and with its members, said Nancy Emory.

The people at Gateway want mental illness out from hiding.

Greenville Mayor Knox White, who was on hand for Friday's dedication, said it was appropriate the house is on a major thoroughfare into downtown.

"How mental illness touches everyone," White said. "Your building says it all, and it will say it for a long time to come."

"Thank you for filling where government has to stop," she said.

About 85 people are receiving services today. Once the coronavirus pandemic subsides, the new Gateway House will be able to serve more than 200. It has been operational since August but is ramping up slowly to full capacity to maintain social distancing protocols, said Annette Sanders, Gateway's chief financial officer.

"Even with the pandemic we still had families all over the state wanting to get their loved ones in the program," Sanders said.

Gateway is a certified clubhouse model program, meaning it is among roughly 300 similar facilities worldwide that create an open yet structured space for adults with mental health challenges to gather during the day, access services and build life skills. Greenville's Gateway clubhouse is among just 12 in the world that serves as a training center. This year, it hosted its 204th group of visiting trainees.

Operating on an annual budget of about $2.2 million, according to federal nonprofit filings, Gateway receives about 60 percent of its funds from Medicaid reimbursements from its members. It also seeks grants and typically covers about 10 percent of its budget through private donations. The capital campaign for the new building, Sanders said, will hopefully open up a new era of heavier private support.