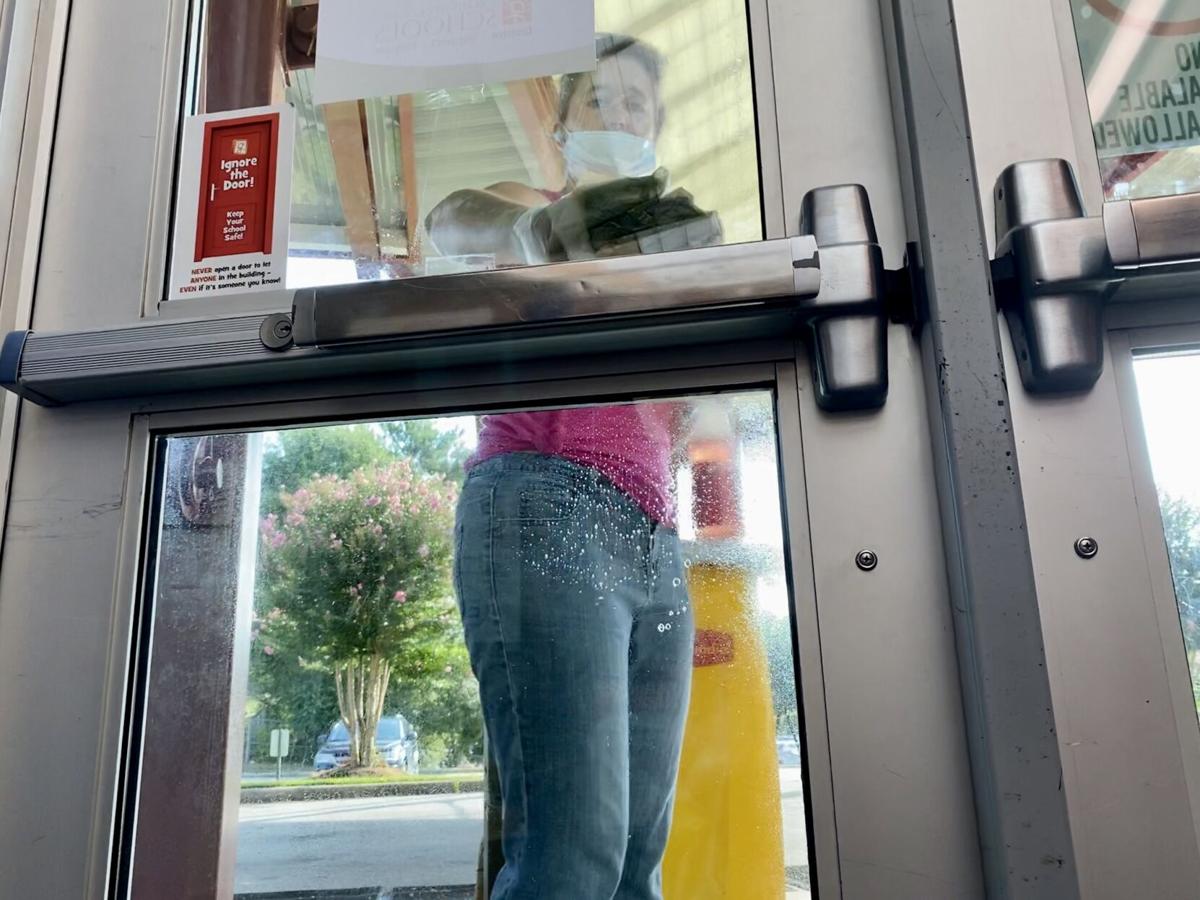 Kim Moorer cleans the entrance to East North Street Academy on Monday morning, Aug. 17, 2020, after elementary students entered the school for orientation. With coronavirus still widespread in the county, a hybrid schedule of online and in-person classes will launch Aug. 24 in the school district. 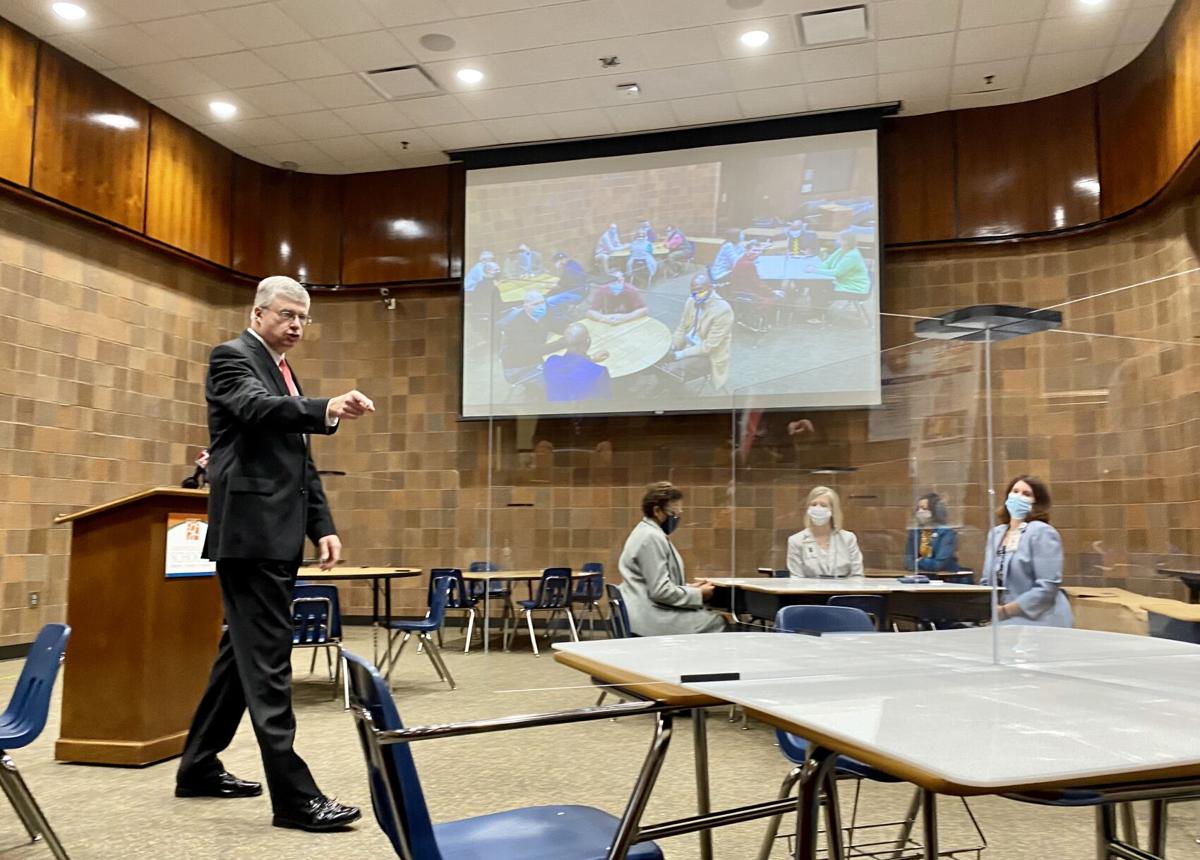 During a press conference Wednesday, Oct. 7, 2020, at district headquarters in downtown Greenville, Greenville County Schools Superintendent Burke Royster explains how plexiglass barriers will work in elementary schools to mitigate the spread of coronavirus. 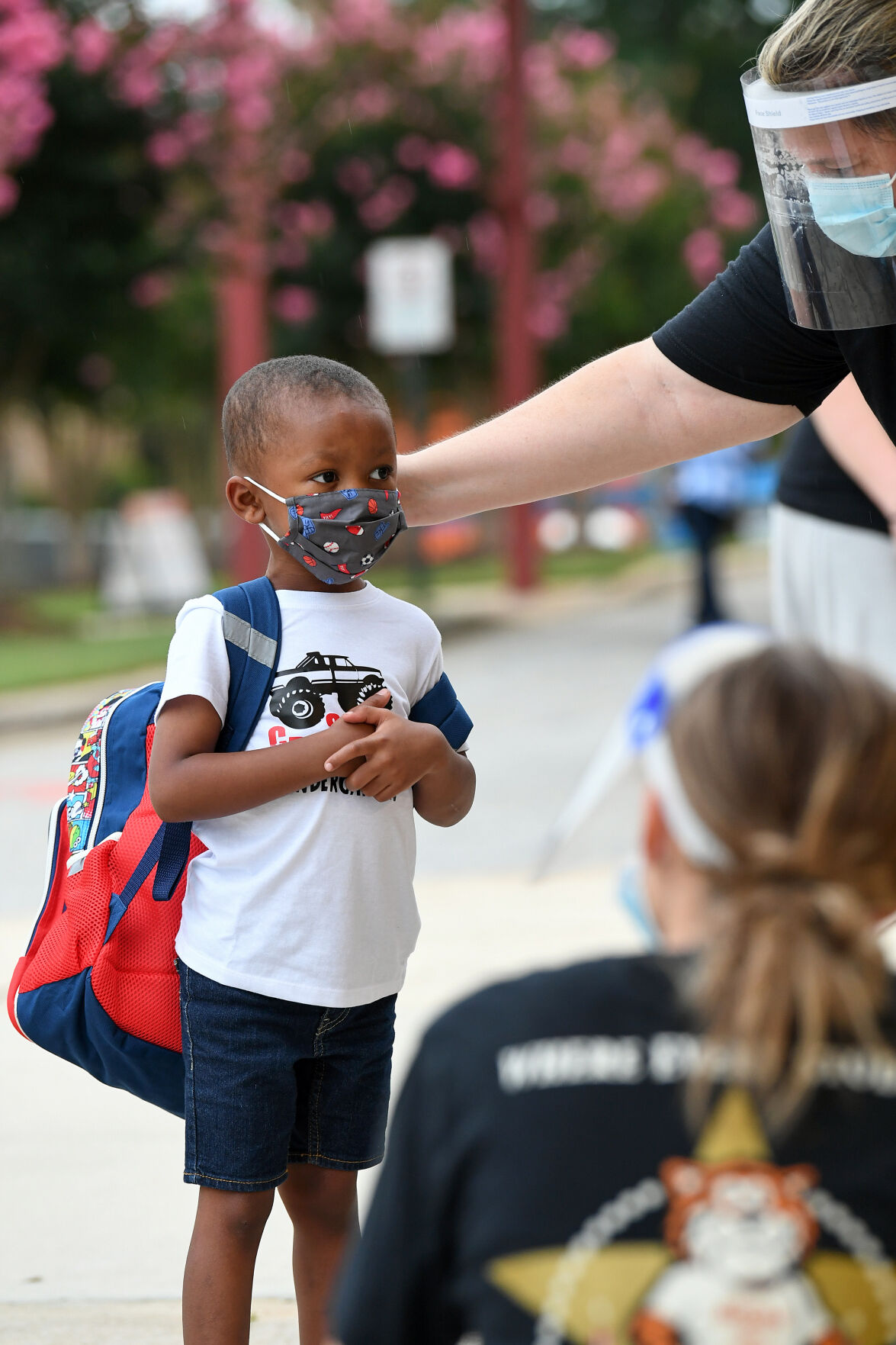 K-4 student Carter Brooks is greeted by teachers as he arrives at East North Street Academy in Greenville for the first day of Monday, August 24, 2020. Bart Boatwright/Special to The Post and Courier 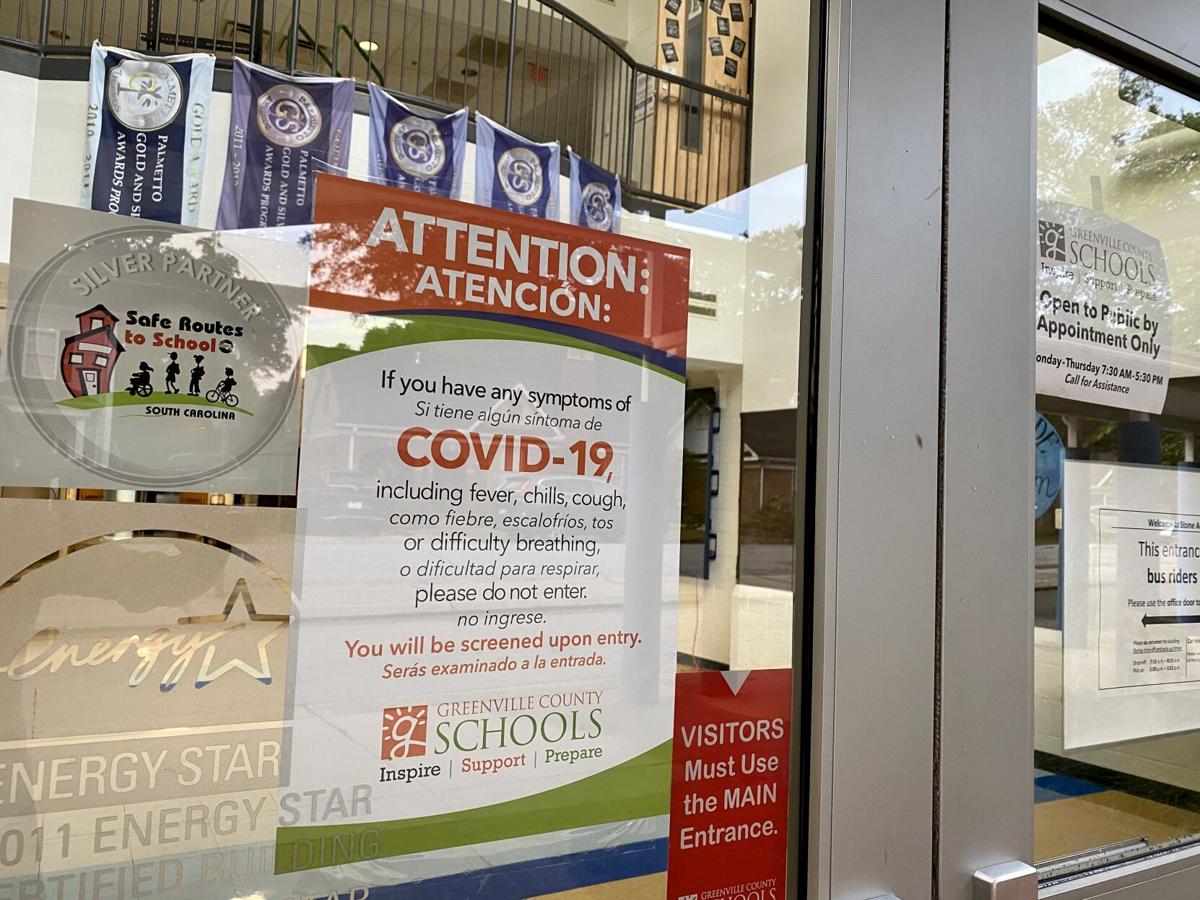 Greenville County Schools got a jump on most of the state, welcoming students back to classes on Monday. Here, the entrance to Stone Academy informs visitors that access is limited and available only by appointment.

Confirmed cases over a two-week period earlier this month showed kids infected at half the rate of Greenville County residents as a whole.

Confirmed cases among employees over that same period showed the workers were infected at nearly double the rate of county residents as a whole.

"You've got your dedicated teachers who are 35 to 60 years old," said Terrell Brown, president of the local branch of the South Carolina Education Association. "This is also the age that many people are prone to get infected."

The data presented Tuesday was the centerpiece of the Greenville County school district's COVID-19 update, a roughly biweekly account of how many infections are occurring in the community and at schools, and what changes, if any, should be made to the district's attendance plan. Nearly 52,000 students attend classes in-person at least part of the week.

Jason McCreary, the district's director of accountability and quality assurance, delivers statistics based on reports and contact tracing that the district receives from students and staff, and district leaders couple that with recommendations from the South Carolina Department of Health and Environmental Control (DHEC) as well as local medical professionals at PRISMA and Bon Secours health systems.

Calling it the "Attack Rate," McCreary found that when student and employee confirmed infections were combined, they came to an infection rate between Oct. 1 and Oct. 14 of 0.16 percent — significantly below the county rate of 0.24 percent for that period.

However, students outnumber employees nearly seven to one, which heavily skewed the rate downward within the district. Separating the populations, the infection rate for students was 0.12 percent; for employees it was 0.45 percent.

Brown, a second-grade teacher at Cherrydale Elementary, has been teaching for nearly 20 years. He said he knows a lot of educators who are considering getting out of the profession, both because of the double workload that has come of teaching in person and online but also concerns about personal safety.

That fear, said McCreary, is something Greenville County is taking seriously. A survey circulated among county teachers in early October found that just under half of teachers were not comfortable with the idea of returning to full attendance at schools. The district's superintendent said any plan to increase days of attendance must, along with social distancing or its equivalent, have buy-in with more teachers before moving ahead.

Most schools in Greenville County have been operating at half attendance since August to avoid crowds and the spread of infection.

"Whomever it is, whatever a teacher fears, that's genuine fear," McCreary told The Post and Courier on Wednesday.

On Tuesday, McCreary's report to school board trustees on the state of coronavirus infections in the district was mixed.

Superintendent Burke Royster applauded McCreary's approach and the story it seems to tell: Students and employees have stuck assiduously to anti-infection protocols — wearing masks, keeping their distance and washing their hands. The data also seems to suggest that people are safer in the schools than not. Confirmed infections among students and staff have, for the most part, been traced to exposures outside the regular school day and outside of schools.

"What I take from this is the protections and protocols we have in place are working because our rate, which should generally reflect what's going on in the county, is much less," Royster told trustees Tuesday night. "It is statistically significantly less than the county and the state. So I believe we are doing the right things."

That there was a large disparity in infection rates between students and employees emerged after trustee Crystal Ball O'Connor asked what the numbers looked like when leaving out the district's nearly 74,000 virtual and in-person students. The district has just under 11,000 employees.

There are no surprises here, McCreary told The Post and Courier following Tuesday's meeting. Confirmed cases are far lower among young people, he said. Months of research and public reporting on the disease has borne out that confirmed infection rates vary widely among demographic groups — whether by age, socioeconomic status, profession or ethnicity. Though imperfect, he said, the most accurate way to compare the district's infection data with the county as a whole is to combine all groups.

Currently, about 28,000 middle and high school students attend classes in person just two days a week, spending the other days learning at home on district-issued laptops. About 24,000 elementary school students will be attending classes five days a week by the second week of November. Another 22,500 students of all ages have opted to take all their classes virtually.

The district has demonstrated flexibility in its attendance plan, which initially limited in-person attendance to one day a week if community spread of coronavirus was classified "high" by DHEC. Attendance has since increased to two days a week and remained so at most schools despite Greenville County veering back into "high" spread in recent weeks.

The undisputed bad news, McCreary said, is that cases everywhere — including in the schools — are on a steep incline. He and Royster also reported that to trustees on Tuesday.

On Oct. 13, the district had 24 students known to be infected and in isolation. Two weeks later, that number had more than tripled to 74.

"Unfortunately, the incident rate is increasing across our country, across the state and like just about any other aspect of our communities, what happens in the community happens in the schools," Royster said.

Sherry East, president of the South Carolina Education Association, said Greenville has demonstrated a commitment to transparency and a careful, conservative attendance strategy during the pandemic. Eighteen districts in the state have all students attending five days a week. East said she's also heard from teachers deeply upset about administrators not enforcing mask mandates.

She said she is more concerned about people throughout the state not reporting their illness, or not reporting who might have been exposed. The fear among school employees, she said, is that they will miss days of work or be resented for making others miss work.

"The numbers aren't real," she said. "Teachers come into contact with so many humans a day. You have no idea."

Brown, the teacher at Cherrydale, said he is concerned that politics is driving policy more than science and a commitment safety.

All data is limited and malleable in the hands of people trying to tell a particular narrative, McCreary said.

"Everything is so polarizing now," he said. "People have used statistics, whether it's the CDC or whatever, people are trying to use statistics in a way to tell their story, which is wrong. I am not trying to tell a story. There is good and bad information in this."