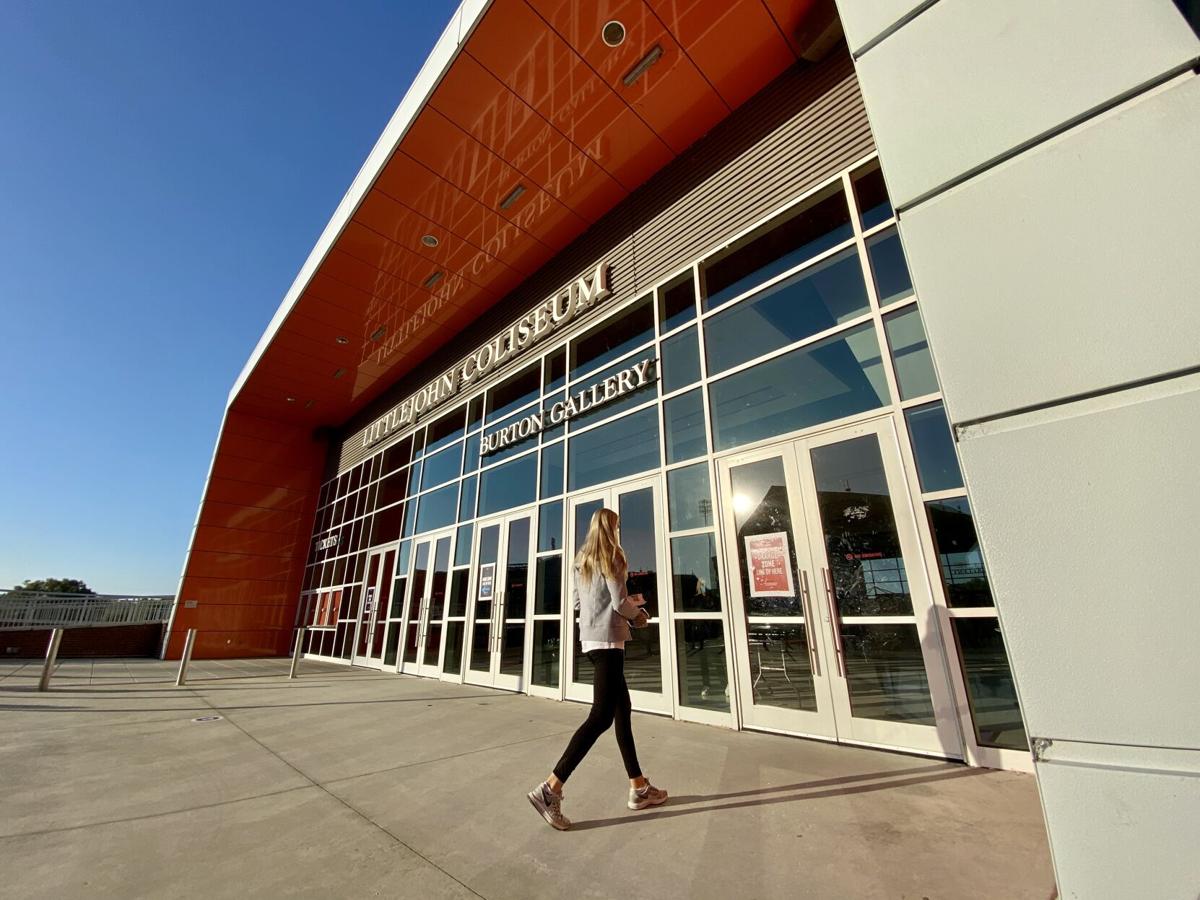 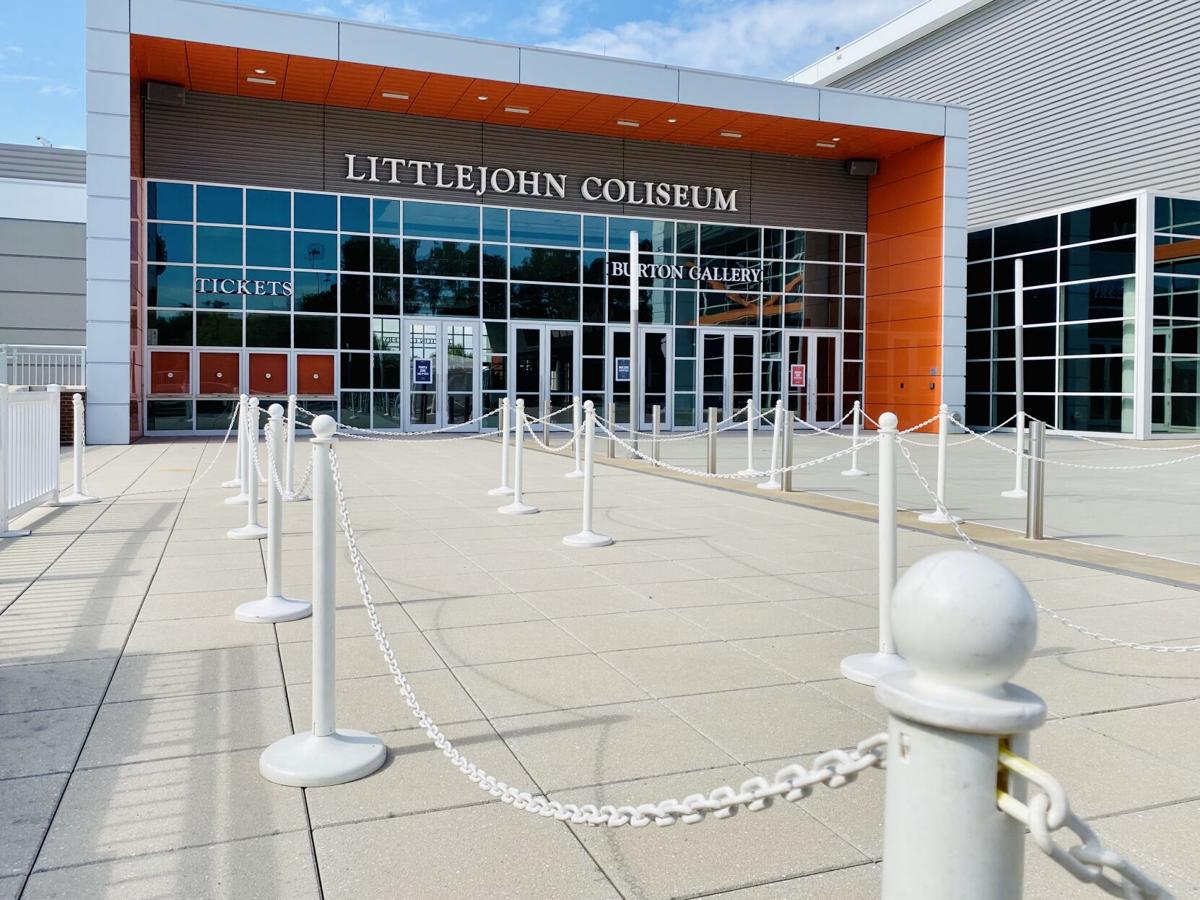 Plastic stanchions and chains on Friday, Oct. 16, 2020, mark where students should queue up outside of Clemson University's Littlejohn Coliseum for coronavirus tests. Anna B. Mitchell/Staff 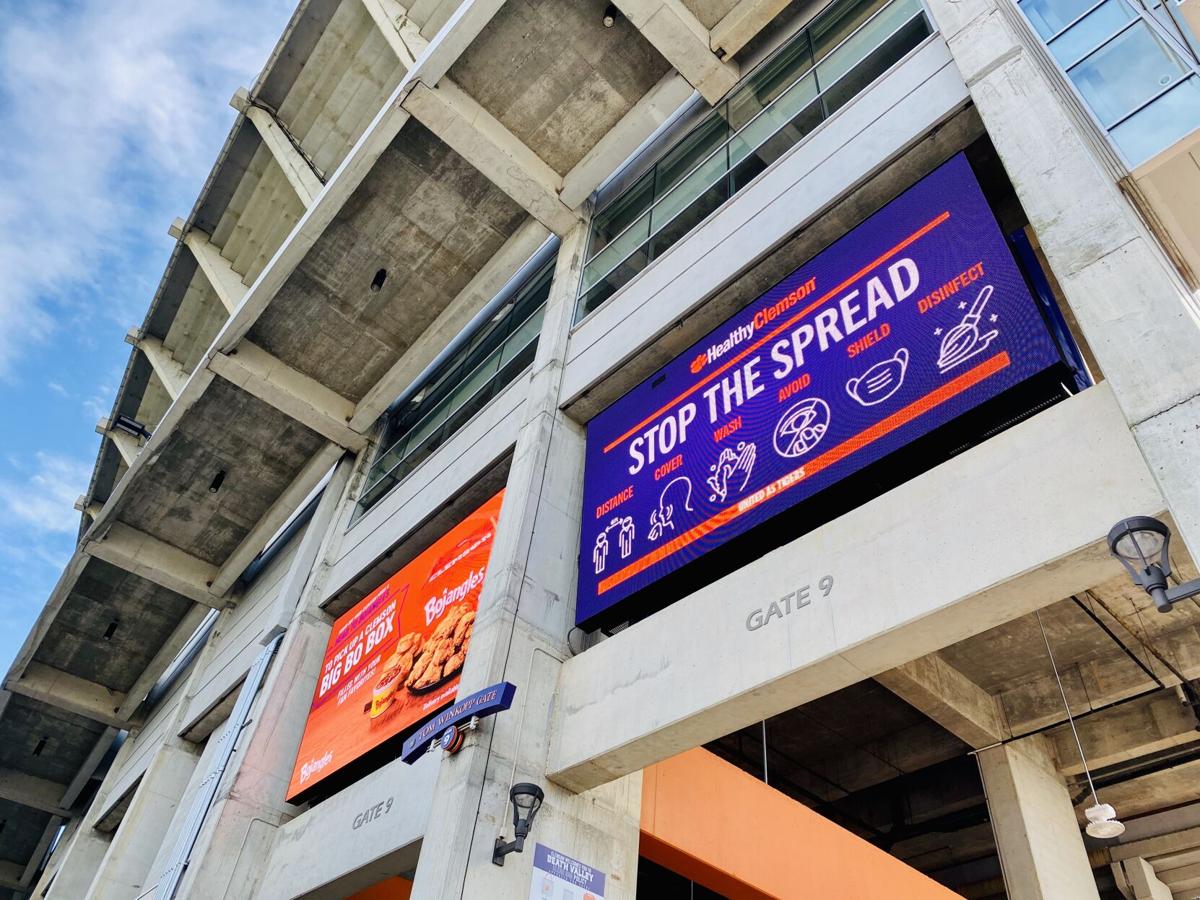 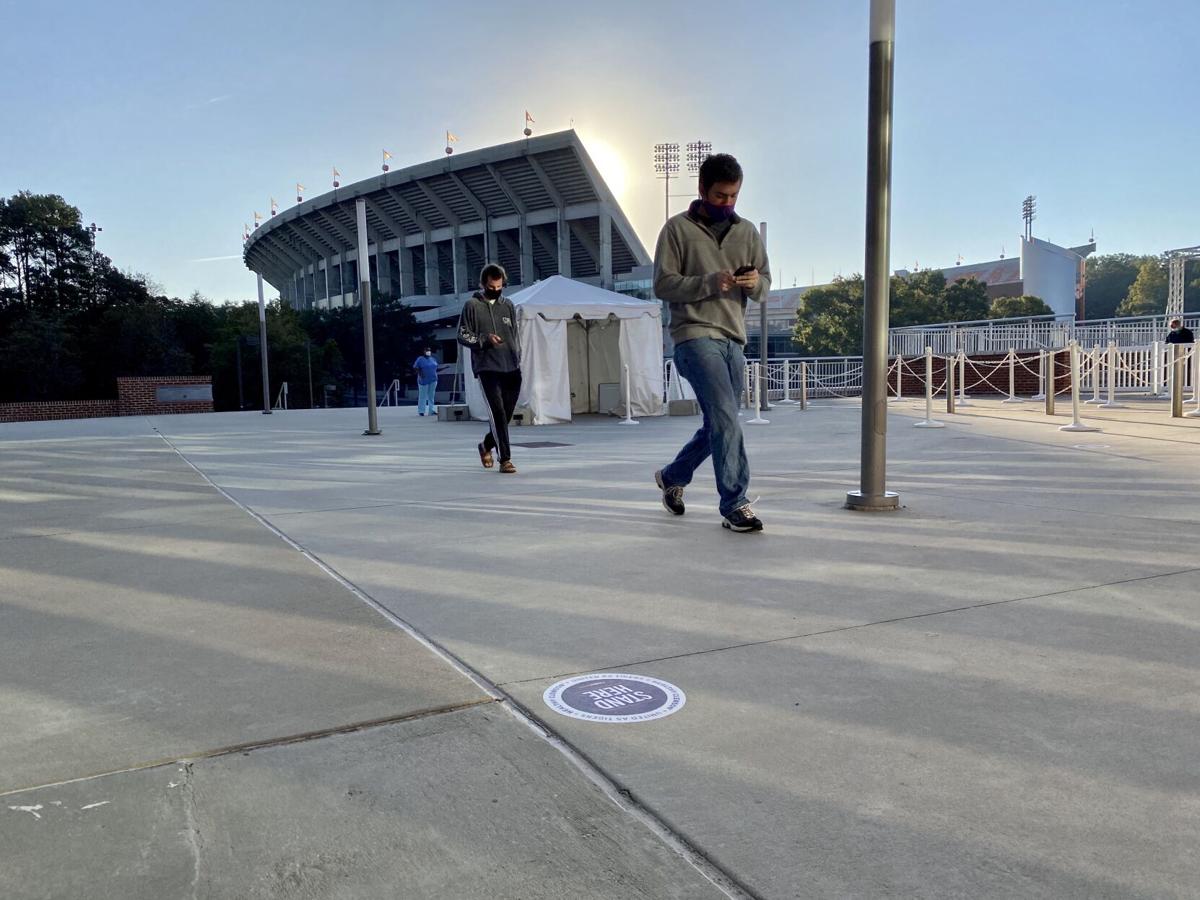 Clemson students report early Monday, Oct. 19, 2020, for their mandatory weekly coronavirus tests. Clemson University announced Thursday that students would not return to campus for the fall semester after the Thanksgiving break. Anna B. Mitchell/Staff

Plastic stanchions and chains on Friday, Oct. 16, 2020, mark where students should queue up outside of Clemson University's Littlejohn Coliseum for coronavirus tests. Anna B. Mitchell/Staff

CLEMSON — At 8:30 a.m., Clemson freshman Douglas Harmon of Greenville donned his face mask and headed for Littlejohn Coliseum for a COVID-19 test.

"I'm OK with it," Harmon said Monday of the mandatory testing. It was the first time he and fellow students — some of whom, he said, balked at the requirement — had to start reporting for weekly testing. Few university students nationwide face such a strict routine.

"It's just how the world is going right now," he said. "They need the data to fix it."

Based on recent trends, Harmon has a one-in-25 chance of testing positive for the coronavirus. Based on Clemson data dating back to June, there's a one-in-six chance he's already had it.

Clemson officials know at least 4,379 students have been infected — a tally that puts it at worst in the state and among the worst in the nation. But the response from Clemson-area residents, students and faculty has been mixed. Some express cautious optimism that the situation will improve, and already has. Others worry over the potential impact of so many sick students on the wider Clemson community.

Clemson leaders, meanwhile, remain focused on keeping the campus open. A decision on whether students will return after Thanksgiving for in-person exams is still pending.

David Freedman, a tenured environmental engineer whose work analyzing wastewater for COVID-19 has attracted White House attention, said the widespread infection does not bode well for students who might inadvertently carry the virus home to vulnerable family members at Thanksgiving. The positivity rate last week hovered around 4 percent — low compared with the statewide rate of around 11 percent.

'Flame looking for fuel': Clemson wastewater hints at virus rise, with students on the way

"But I think that tends to mask just the bare fact of the number of students who have tested positive," Freedman said. "We have done so much more testing than other universities. You can pat yourself on the back about that. But step back a minute. More than 4,000 testing positive."

The university, he said, is on a track for herd immunity — perhaps reasonable for a young population but a serious risk for everyone else.

Epidemiologist Corey Kalbaugh, an associate professor of public health at Clemson, is leading the four-man team charged with forecasting and managing the spread of coronavirus on campus.

"The virus is there whether we act like it is or not," Kalbaugh said. "And, at Clemson, we are not pretending like the virus doesn't exist. The virus does exist. The truth is if other places, other universities, were testing as robustly as Clemson is, they would have the same if not a worse profile than ours."

Every few days since June, Clemson has updated an online dashboard that logs how many students have been infected with the coronavirus, a disease with no vaccine, few therapeutics and which has killed 220,000 people in the United States since first striking earlier this year. Clemson's tally puts it just under the University of Georgia for most college cases in the nation, according to an Oct. 8 report in The New York Times, and among just four schools out of 1,400 surveyed whose cases exceed 3,000. The others were Ohio State and Wisconsin.

Still, Clemson scientists leading the university's COVID strategy, which seeks to avoid case spikes like what shut down Presbyterian College last week, say the number of infections, while objectively bad, does not necessarily mean Clemson is the worst:

Georgia's reporting lags behind Clemson's, but with just 92 cases reported at UGA the first week of October compared with Clemson's 385, Clemson likely overtook the Bulldogs in total cases this past week. Clemson's student newspaper, The Tiger, declared as much in an Oct. 14 story: "Clemson University has the most cumulative positive COVID-19 cases out of any university in the United States."

Unlike UGA, however, every Clemson student at this point in the semester has been tested at least twice — before stepping onto campus and once or twice since. More if they live on campus.

Based on an ongoing review of COVID-19-related literature and in conversations with counterparts across the country, Kalbaugh said he knows of just a handful of universities with as sweeping a test regime as Clemson. Be it a nasal swab test or one using saliva, plans are to continue on the same course, Kalbaugh said, adding that he knows of just one other university — Illinois, which is testing students twice a week — that is doing more than Clemson.

Harmon, the Clemson freshman, was among about 1,500 people, mostly on-campus students but also a smattering of faculty and staff, who reported for a test Monday morning. Everyone on campus has been assigned QR codes that sample collectors scan when they present themselves at Littlejohn Coliseum, a basketball arena turned COVID-19 testing clinic. By week's end, Clemson will have completed 8,000 to 9,000 tests.

Plans are well underway to expand. Clemson is ramping up its on-campus, saliva-based testing capacity to 5,000 a day by mid-November.

That's about how many tests are done in the entire state of South Carolina daily.

Delphine Dean, a bioengineering professor, said she predicts Clemson's testing capacity, which could nearly double to 9,000 a day by the spring semester, will aid the community and other colleges and universities that want to ramp up testing, too. Dean said saliva tests, which involve spitting into a vial, are easier to administer, just as accurate as nasal swabs and are faster to analyze with Clemson's own professors and grad assistants doing the work.

Dean teamed up this summer with chemical engineering associate professor Mark Blenner to launch Clemson's saliva-based COVID-19 testing lab. The pair leaned heavily on assistance from researchers at USC who led the state in coming up with saliva tests and have been testing Clemson athletes since August. They have cross-checked results for accuracy against nasal-swab tests and have been ramping up capacity steadily.

"Because the lab is on campus, we can return the results basically the same day," Dean said. "So athletics was like, 'We should do this.'"

Important in terms of sustainability, Blenner and Dean said, saliva tests are cheap: $8 a test, compared with the roughly $85 per test the university is currently paying an outside vendor to collect and analyze nasal swabs.

In a model they shared with university trustees on Sept. 10, Kalbaugh's campus COVID response team predicted 1,200 students would arrive Sept. 21 already infected, and that the number of kids infected would rise for a couple weeks before dropping.

That prediction has indeed played out, a Post and Courier analysis found, but the sheer scale of infection has proven much higher than expected.

“The virus doesn’t care. It’s there regardless,” Kalbaugh said.

Kalbaugh's team predicted 131 on-campus students would require quarantine by Day 28 of in-person classes. Oct. 15 was Day 26, and 399 were in quarantine, the university reported. By Monday it dropped to 317, according to the university's COVID dashboard, but was still more than double what modelers had predicted.

The idea is to catch people before they present symptoms — some never do — and to put them into quarantine before infections spread unwittingly. Contact tracers descend upon dormitory floors to test friends and neighbors.

With new infections on the decline, Clemson's strategy appears to be working.

"From my experience with the testing we have done, most of our students are completely asymptomatic or minimally symptomatic," Dean said. "If they hadn't gotten tested, they wouldn't think they had COVID."

Blenner said the prevalence of the disease detected at Clemson should be a warning to all South Carolinians.

"The baseline problem is that the state of South Carolina had too-high rates," Blenner said. "I think the university strategies are slowing it down, but it's still a smoldering fire. You're putting out flames, but there's a glowing ember there."