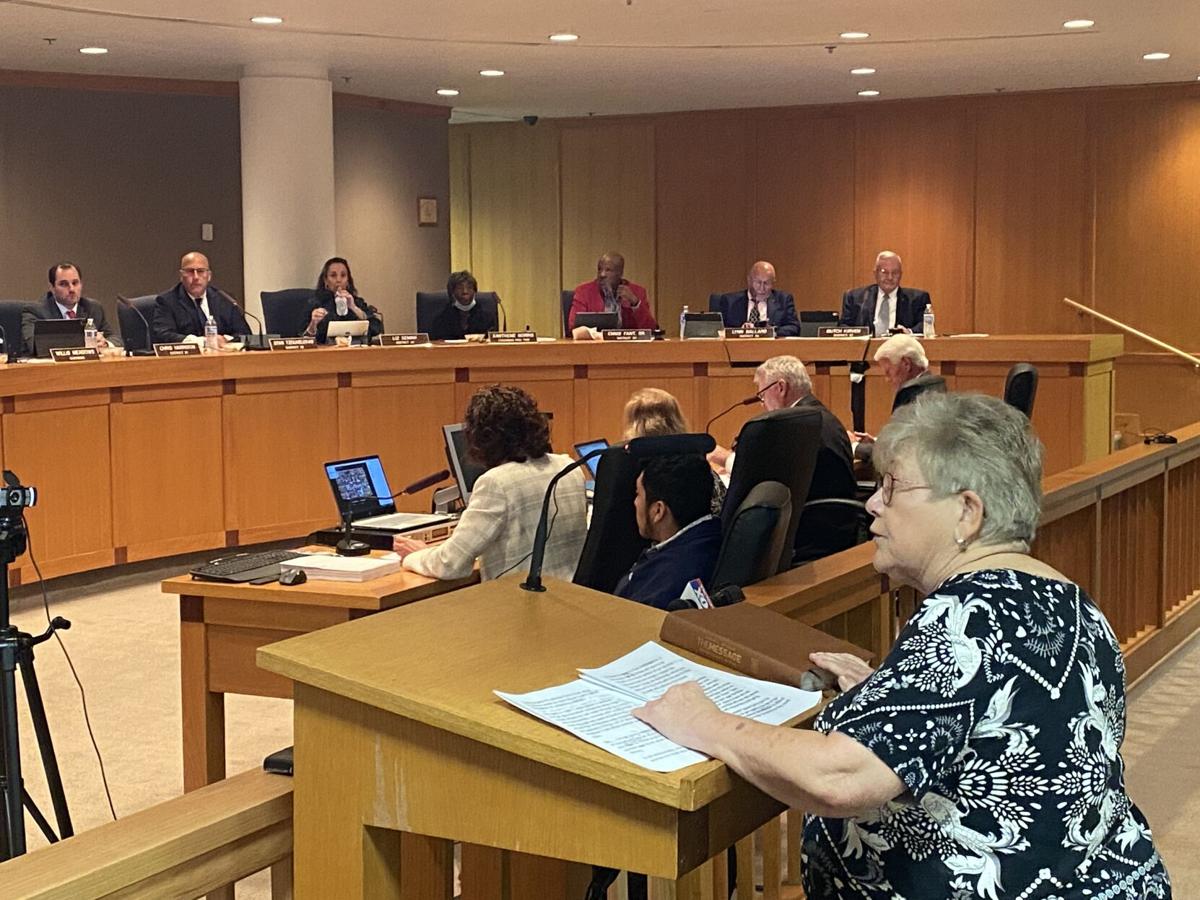 Susie Smith, a retired pastor, speaks against a resolution considered by Greenville County Council to direct the county library board to remove books "promoting sexuality" from children's areas of libraries. Nathaniel Cary/Staff 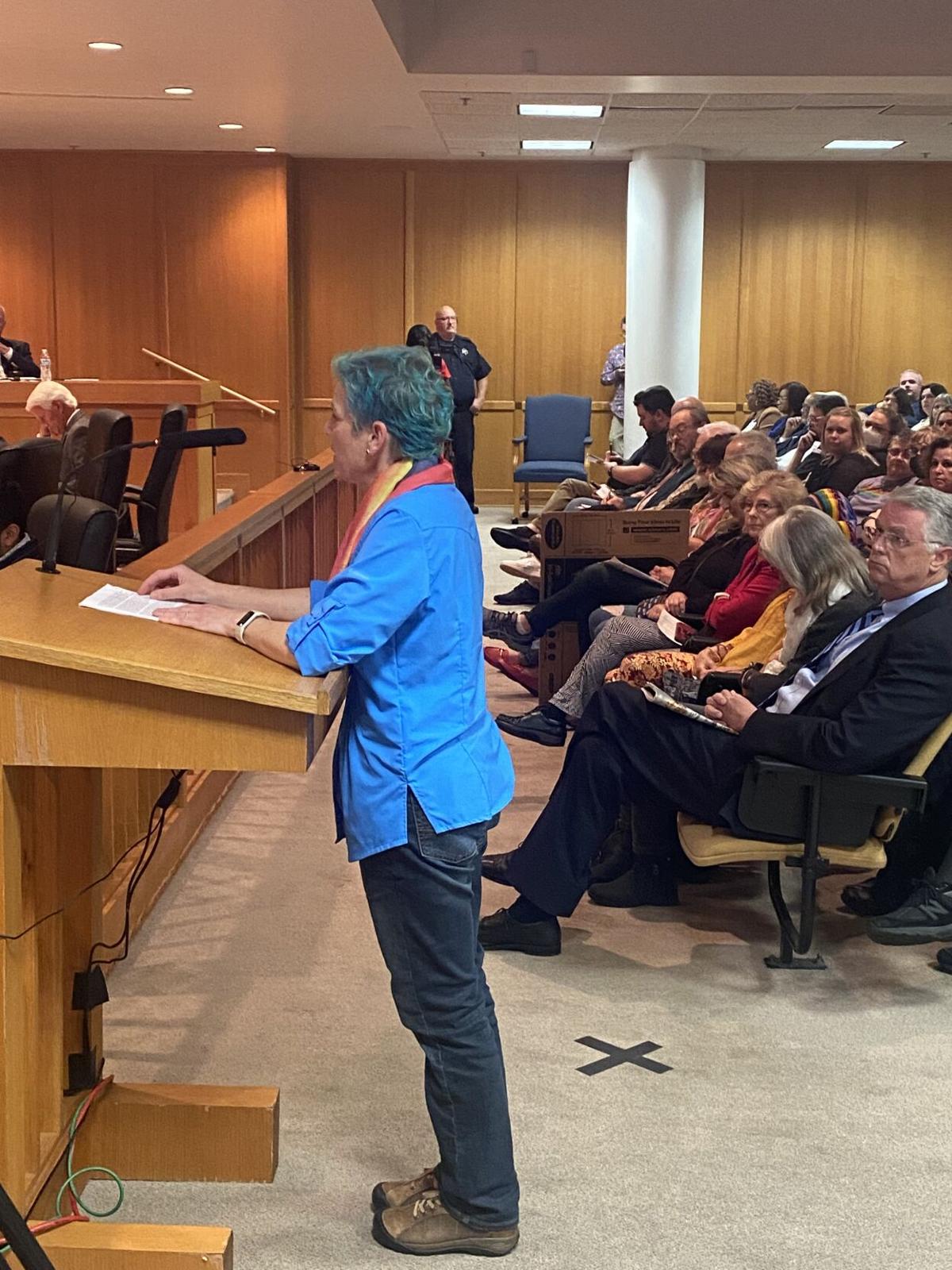 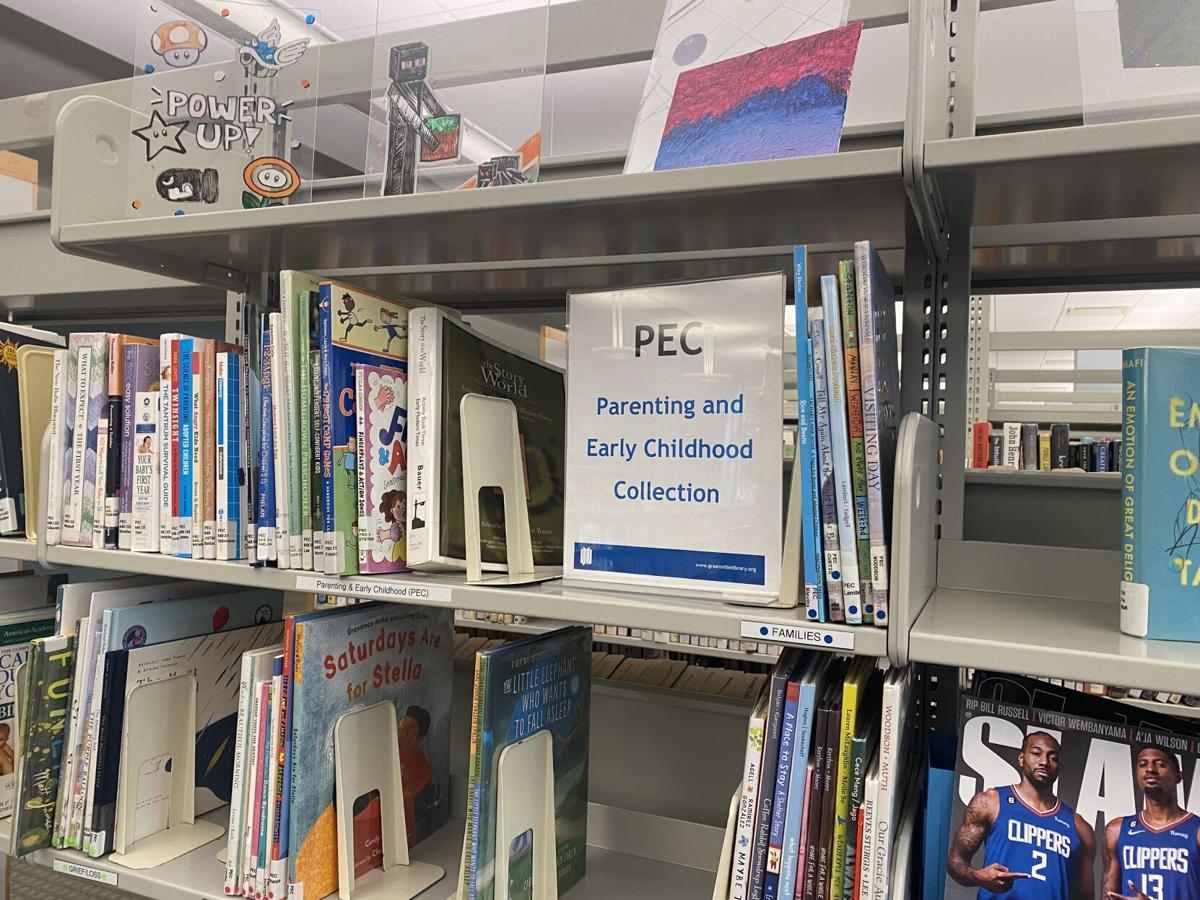 The Parenting and Early Childhood Education Collection at Hughes Main Library in Greenville is pictured on Nov. 1, 2022. Nathaniel Cary/Staff 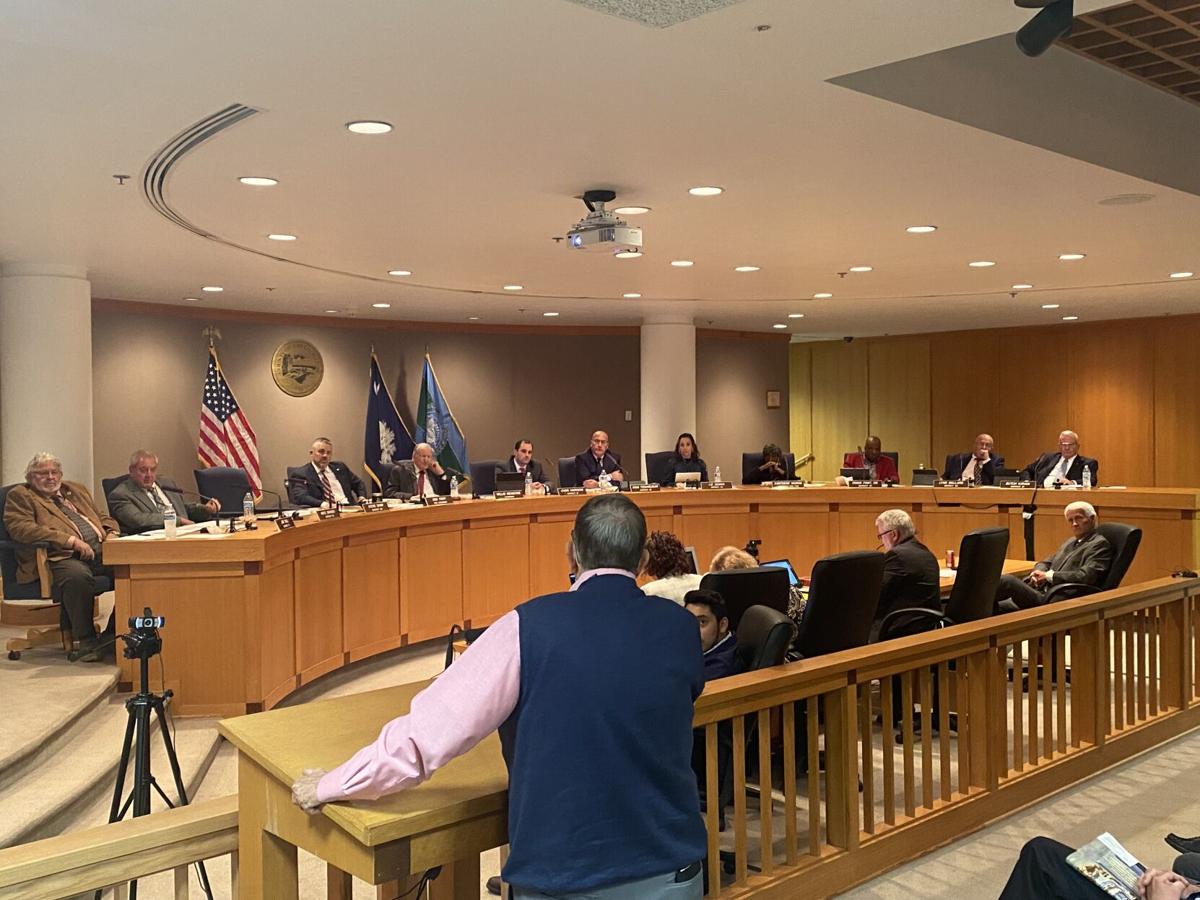 GREENVILLE — A simmering controversy over access to LGBTQ and sexually explicit materials at Greenville County libraries boiled over Nov. 1 as hundreds of residents flooded a County Council meeting to influence the council's decision over whether it should assume authority to demand books be moved.

The council listened to 30 minutes of debate among residents — some who mistakenly believed children could access pornographic books among the shelves of children’s books at their library and others who believed the council wanted to target LGBTQ materials.

In the end, the council voted not to consider a resolution that would have had the council usurp the role that the library system's board of trustees has in such decisions.

Those who feared government overreach and LGBTQ discrimination considered the council's decision a victory — though a final verdict is still left in the hands of the library board with a vote set for next month.

The controversy first sparked in June when Pride Month displays at county libraries were removed at the direction of library officials and then reinstalled after protest by members of the LGBTQ community.

It escalated in September into a call by the county’s Republican Party to remove LGBTQ-themed children’s books from the children’s area of the county’s libraries and put them in the adult section.

The issue morphed once more in October into a call to move books about sex and sexuality from areas of the library geared toward parents but located close to children’s and young adult areas of most library branches.

The changing dynamics of the culturally charged issue brought out a confluence of fed-up residents to County Square Nov. 1.

One council member sought to introduce a resolution ordering the Greenville County Library board of trustees to limit books “promoting sexuality” to adult sections of libraries.

The council then voted 9-3 against discussing the proposed resolution.

A number of council members said they agreed with the resolution’s sentiments but felt the council shouldn’t direct how the library board operates.

“If we pass this, we’re directing them and they have to do this according to us,” Chairman Willis Meadows said. “I don’t think that’s our authority.”

But it doesn’t mean the issue is dead.

Earlier in the day on Nov. 1, the library board’s materials committee met to review 23 book titles brought to its attention. The committee recommended the board put a hold on each of the titles so the committee could review the materials for appropriateness.

Some of the titles come from a leaflet previously available at branch circulation desks in September during "Banned Book Week," a promotion highlighting commonly challenged texts nationwide.

During a two-hour meeting, the five-member committee chaired by former county Councilman Sid Cates discussed the types of library cards and the access they provide to certain materials. They also discussed where specific books are shelved, the process of selecting new materials by library staff and how books are challenged by patrons.

If a library patron wants the system to reconsider a material in the collection, they must complete a “Request for Reconsideration of Library Material” handwritten form, which is available at all branch locations. Cates said no forms have been received regarding the 23 titles.

When a reconsideration form is received, a committee of library staff members reviews the request and provides a recommendation.

The request is then sent to Executive Director Beverly James, who informs the patron of the decision. The patron can appeal if they believe the staff erred in judgment. The appeal then goes to the library board’s materials committee, which makes a final recommendation. The full board then votes on the recommendation.

The title that dominated most of the committee’s attention on Nov. 1 was “It’s Perfectly Normal: Changing Bodies, Growing up, Sex, and Sexual Health,” a book originally published in 1994 and republished multiple times since.

While the reading age attributed to the book is 10 years old and up, the Greenville County Library System shelves it as an adult book in the Parent and Early Childhood (PEC) Collection.

There are six copies of the book in the system. It can only be checked out with library cards that provide unlimited access to materials. Children and teens up to 17 years old can only obtain a library card with a parent's permission. Parents or guardians regulate what level of access their minor has to materials for checkout.

At library branches, the PEC collection is located steps away from the children and juvenile sections, an intentional choice because many of the titles in the section include parenting techniques like potty training and sex education. The idea is that as children peruse picture books, adults can find parenting books with ease.

This proximity has caused pushback from some patrons who worry about a child picking up a book and seeing allegedly “sexually explicit” or “obscene” material.

At Hughes Main Library downtown, for instance, the PEC collection is located on the same row of books as the young adult section.

The committee recommended the board vote to relocate the PEC collection to the adult nonfiction section.

The second recommendation was to have the 23 questioned titles put on hold for the materials committee to review ahead of its next committee meeting.

Some of the books have preexisting waiting lists or are currently checked out by patrons. If passed, this resolution would temporarily put the titles on hold from being further checked out so they could be reviewed by library trustees.

Each of these recommendations requires approval by the library board. That meeting is scheduled for Dec. 5.

How the issue came to County Council

Tensions have been building for months over access to books, particularly ones that incorporate LGBTQ elements, at the county’s libraries.

In June, library branches briefly removed and then reinstalled "Pride Month" displays, though no vote by the library board was ever conducted on the issue. A trustee later resigned in protest and called on the board Chairman Alan Hill and Executive Director Beverly James to resign. 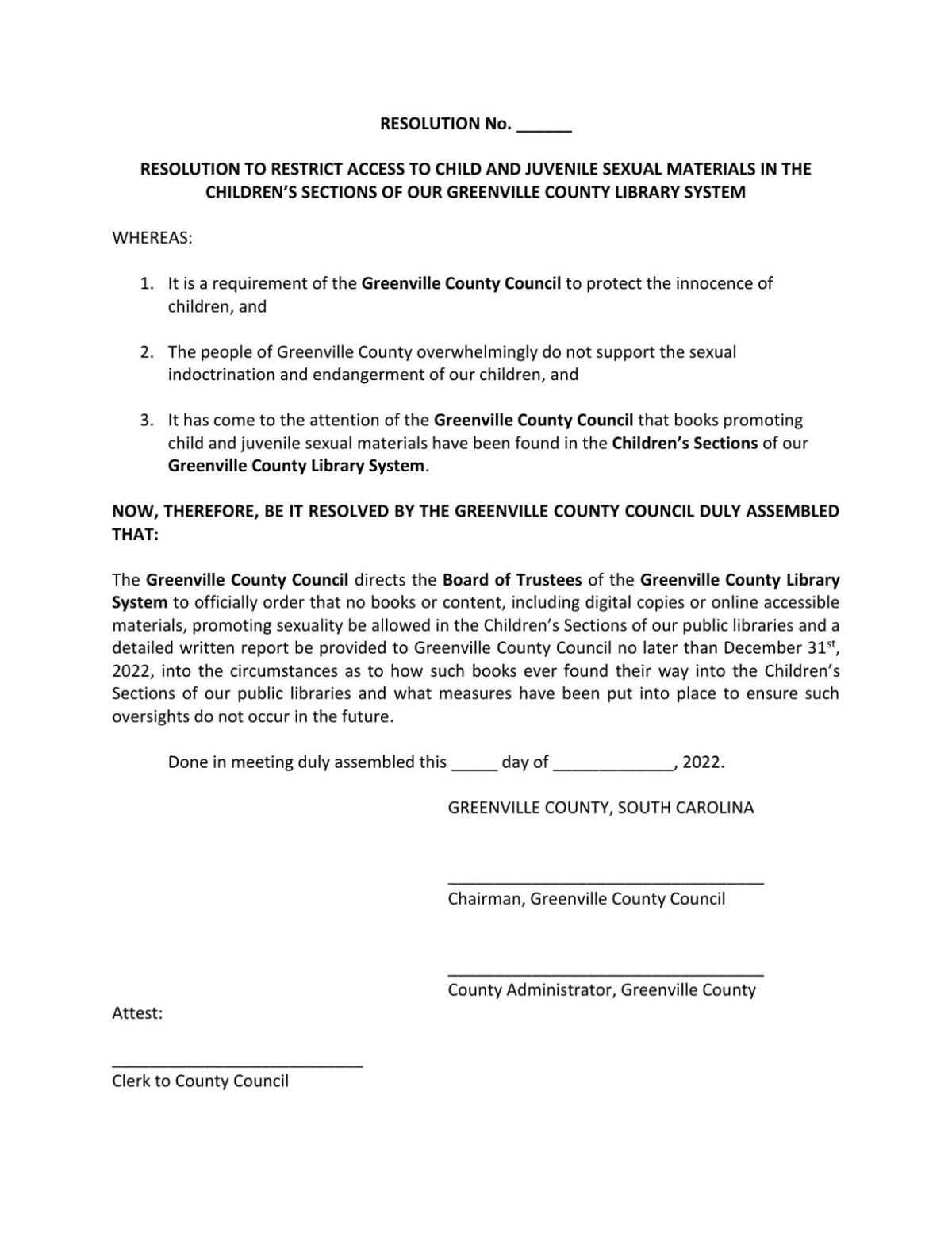 In September, the county GOP’s executive committee approved a resolution calling on County Council to direct the library board to limit access to books with LGBTQ themes or characters and move those books to the adult sections of libraries.

Outgoing Councilman Joe Dill, who lost his reelection bid this past summer and is a member of the county GOP executive committee, failed in his attempt to introduce the resolution Nov. 1 that would order the library board to order that no books or content “promoting sexuality” be available in children’s sections of libraries.

The resolution also called for a report to the council on how books could have been allowed in the children’s area and for the library board to ensure it doesn’t occur in the future. The resolution didn’t specify LGBTQ books.

Susie Smith, the first speaker at the County Council meeting and a retired pastor, brought her Bible to the podium and said tongue-in-cheek that it would have to be removed from the library for its promotion of sexuality if the council decided to take action.

Speakers against the council taking action said the local party had drummed up “performative outrage” during an election season while another said limiting access to LGBTQ books was “hurting queer and trans children.”

“We are your children and we’re not going to go away because you hate us,” said James Dotson, who self-identified as a gay man.

Others pushed for the library system to limit access to books, describing some as pornographic. Those books aren’t available in the children’s section but are in the nearby PEC collection.

“This is an all-out assault on our children,” said Barbara Evans of Taylors.

The culturally charged issue brought an overflow crowd to County Square. Every seat was filled in council chambers and dozens of people stood in the hallways outside the building entrance.

Councilman Butch Kirven said the council shouldn’t interfere with the library board, which was addressing the issue already. “I think we ought to let them do their job,” he said.

Dill said he was standing up for “what’s right" and developed the resolution to support the library board.

“I think this resolution supports the library board in the direction that they’re going,” Dill said.

Cates addressed the council during the comment session and said the materials committee had taken action earlier in the day “essentially agreeing with what you want.”

“We’re trying to do what you want us to do,” Cates said.