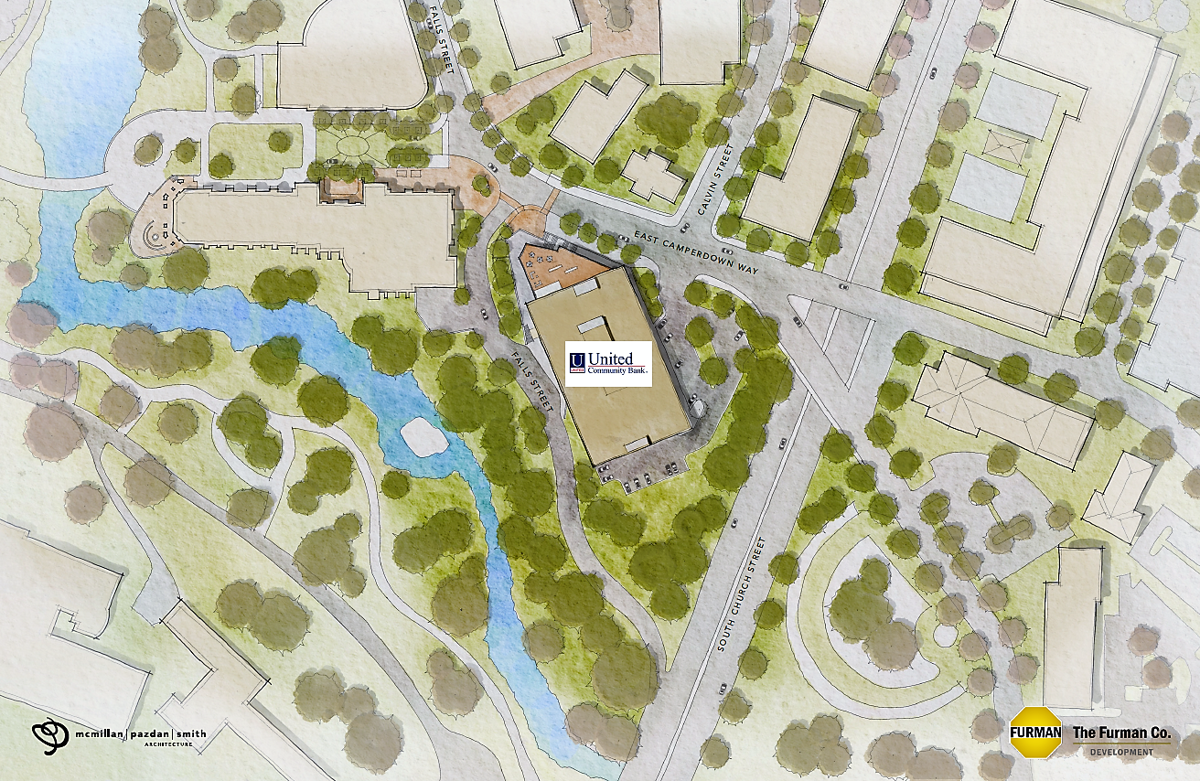 In this rendering, provided by United Community Bank, the company's new headquarters is marked at 200 E. Camperdown Way, a 1.9-acre parcel where the Wyche Law Firm currently has its offices. The bank plans to build a new structure and move in by 2024. The law firm will be moving into its new offices by the end of 2021. 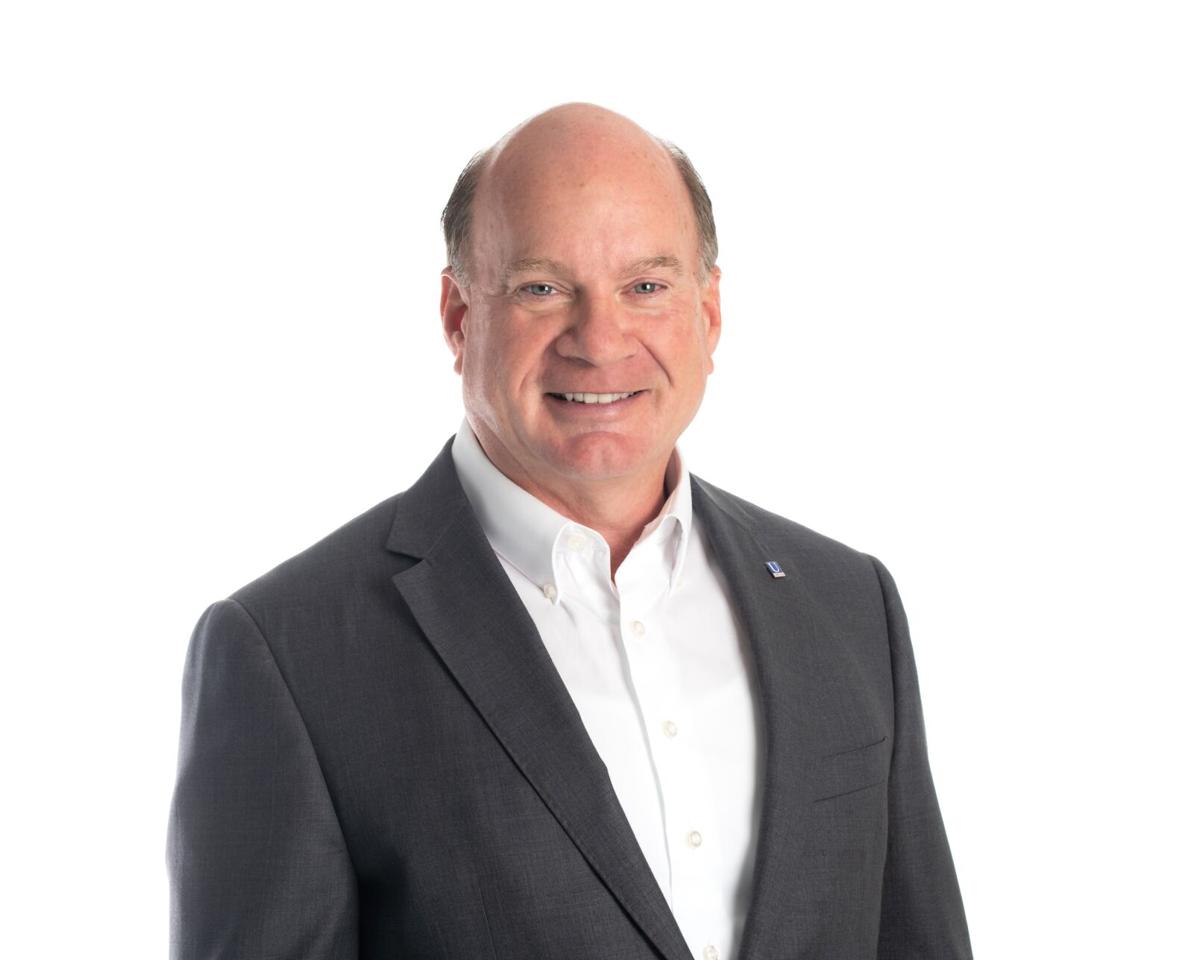 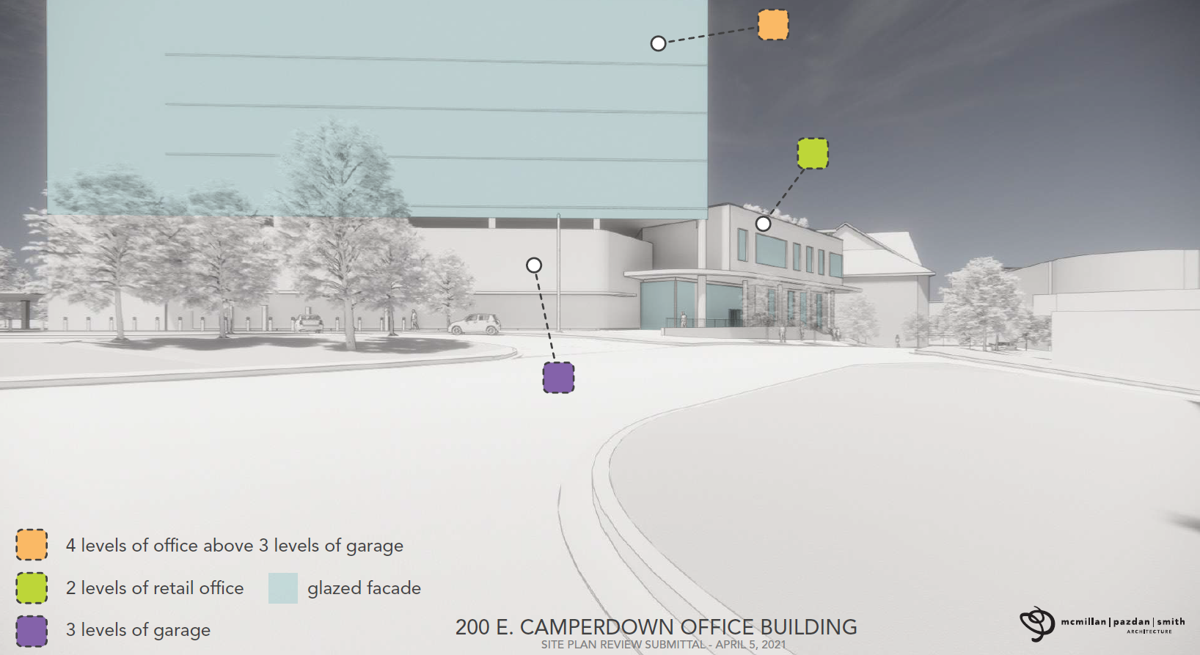 This architectural rendering of the United Community Bank headquarters in Greenville was submitted May 6, 2021, as part of the bank's application for site approval before the city of Greenville's Design Review Board.

In a May 13 announcement, the bank said it would acquire Greenville-based FinTrust Capital Partners advising firm before the end of 2021.

FinTrust, launched in 2008, manages $2 billion in assets in multiple markets across South Carolina and Georgia, including the Upstate and Athens. It fits comfortably within United Community's existing territory, which includes 161 offices in Florida, Georgia, the Carolinas and Tennessee.

Phillip Brice, FinTrust's co-founder, said his company has 32 employees, including 14 advisers. This group adds to United Community's existing pool of 20 to 25 financial advisers. FinTrust is also poised for more growth, Harton said May 13.

"One of the attractive pieces to us about FinTrust was, you know, they've built the team and the structure and compliance and operations and other things you need to be able to scale up their business," Harton said.

"When we were talking back in 2013, they were a much smaller company then."

United Community Bank, currently based in Blairsville, Ga., recently announced it is relocating its headquarters to Greenville. The bank anticipates starting construction on its new building at 200 E. Camperdown Way in early 2022 and moving in by 2024.

On May 6, the city of Greenville’s Design Review Board approved the bank’s site plan with a handful of conditions for redeveloping 200 E. Camperdown Way, currently the home of the Wyche Law Firm. The plan included a rough architectural rendering of the building’s layout. A two-story bank branch will be open for customers at the front of the structure, and a four-story tower will rise behind it. Underneath will be three subterranean parking deck floors. Stephen Navarro with The Furman Co. is representing the bank for the construction project.

With the headquarters announcement in February, Harton said that he expected $2 billion to $2.5 billion in annual growth through new business and acquisitions in coming years. United Community has tripled in size since 2012.

Wealth management, Harton said, "is clearly very complimentary to our core, banking business." Banking customers, especially those who are aging, need financial plans, along with traditional banking services such as mortgages, commercial loans, and deposits.

"To be able to provide that service, that peace of mind, is what we've always been about," he said. "And so this really just speeds up our strategic growth plans in this area."

United Community's wealth-advising operation had been growing internally but got a boost last year, Harton said, when the lender acquired Seaside National Bank and Trust in Florida.

FinTrust managed about $500 million in assets in 2013 and has grown four-fold since then, Brice said. Some of that growth has come organically but the firm also has recruited and acquired advisers along the way.

For FinTrust, the advantage of joining United Community lies in the bank's ability to set up trusts for customers and offer other financial services.

"What this does is really it gives more strategic direction to that entire (advisory) group, and gives both sides more products," Harton said.

The FinTrust announcement came a few weeks after Harton told investors during a quarterly earnings meeting that the bank was open to additional mergers and acquisitions within its five-state footprint.