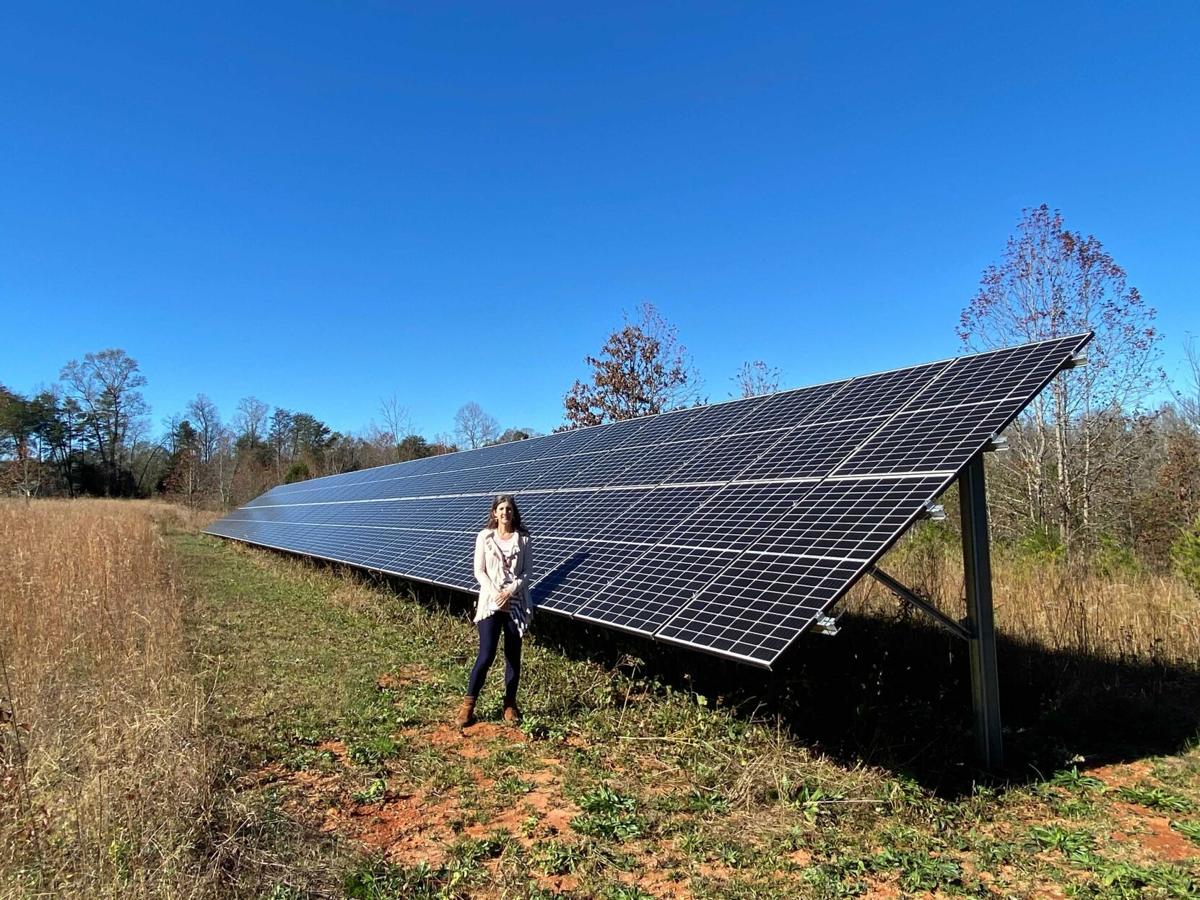 Brooks Smith stands near solar panels she and her husband had installed on their property in Travelers Rest. Piedmont Natural Gas wants to survey their land for a proposed gas pipeline, which they and their neighbors oppose. Nathaniel Cary/Staff

A map of the route Piedmont Natural Gas initially proposed for a pipeline in northern Greenville County. The company informed residents in late November that it would not use that route and will explore other route options. Provided

When Matt Craft found out that a proposed Piedmont Natural Gas pipeline wanted an easement across the back half of his five acres in the Travelers Rest area, he vowed to fight.

The company wanted at least a 50-foot right of way and told him his long driveway could also be an access road to the pipeline if it were built. That would have put a pipeline near his son’s tree fort and made the back half of his land unusable for building, an idea he and his wife had kicked around.

So he and his neighbors started to organize. They saw it as a David vs. Goliath matchup of a few dozen landowners against Duke Energy, a multibillion-dollar utility company that owns Piedmont Natural Gas.

He printed out maps and joined with neighbors to form a nonprofit advocacy group to fight the proposal. They had yard signs made and distributed, created a website with help from some Clemson MBA students, and wrote first-person accounts of what losing their land rights would mean to families who have lived and farmed their properties for generations.

So when Craft got a call the day after Thanksgiving from Brooks Smith, another landowner, telling him she received a letter from Piedmont Natural Gas informing her the company would not use her 18-acre homestead for the pipeline, he jumped in his truck and drove straight to his mailbox.

He ripped open an envelope and found he won, too. Piedmont had reconsidered and wouldn’t use his property.

It was a spark of good news in an otherwise difficult year, he said.

In all, more than 30 property owners along a proposed route for a new 10- to 14-mile natural gas transmission pipeline have received letters from Piedmont that the company determined their land was no longer being considered for the new line. Those receiving letters included landowners at each proposed terminus of the project, meaning the company has canceled the Beaverdam Creek route from Taylors to Travelers Rest.

That marked a significant shift in the company’s plan and came just days after the environmental group Upstate Forever added its opposition to a project it said was unneeded and risked damage to a vital rural ecosystem. Upstate Forever filed its opposition with the state Public Service Commission, the board that would eventually decide whether Piedmont could recoup the costs for its project from customers.

Shelly Robbins, Upstate Forever’s energy and state policy director, said Piedmont told her it had pulled back and will explore different options for the line but wanted to avoid low-lying areas — the Enoree River and Beaverdam Creek are in the area — and nature preserves.

Jennifer Sharpe, a Duke Energy spokeswoman, said the utility is in the early phase of that process.

It has evaluated a number of possible routes between existing infrastructure in Taylors and Travelers Rest. The company wants to build the 8-inch steel high-pressure transmission line to provide natural gas in response to growth in the northern part of the county.

“We’re continuing in our analysis to ensure we can provide excellent service in response to the needs of Greenville County,” Sharpe said.

The company said in its letter to landowners that it had performed a full assessment of the possible route for the North Greenville County Connector.

“After a full evaluation,” each letter said, the company determined the land “is no longer being considered for this project.”

“We appreciate the opportunity to serve this community with clean, affordable and reliable natural gas,” the letter said. It is signed by Ryan Houck, land representative for Piedmont Natural Gas.

Craft said he is still concerned the company will shift its plans to other landowners who will have to take up the fight, but said the community will keep watch over any new plans.

“It’s an example of small-town residents coming together fighting somebody big,” he said. “We are literally going up against Duke Energy. They’re huge … and we helped stop it.”

Robbins, with Upstate Forever, said residents in the area will remain nervous until Piedmont abandons its plan to build a new pipeline.

“None of them want this, and they’re going to get pushback from everybody,” she said.

She wants the company to expand its existing infrastructure if it wants to run natural gas to the area. Piedmont owns a 2-inch line that runs along U.S. 25 to Travelers Rest. It also owns easements on about 5 miles of property along the Taylors side of the proposed route and owns an easement on a Naturaland Trust preserve that it had rejected earlier as a possible route.

Beyond the letter, Smith said residents in the area haven’t been told anything. She wants the state to change its process of how utilities are allowed to assess plans for new infrastructure. Because the company operates in a piecemeal approach to survey properties, the community can’t get the full picture unless it coordinates like the residents along Beaverdam Creek, she said.

“I think there’s an opportunity here with the Public Service Commission to change the way this is done because it can pretty much be done in the dark, because they can go along and slowly get easements before people down the line even know there’s a gas line coming,” Smith said.

“They tell you they want to be transparent, but they are not transparent.”