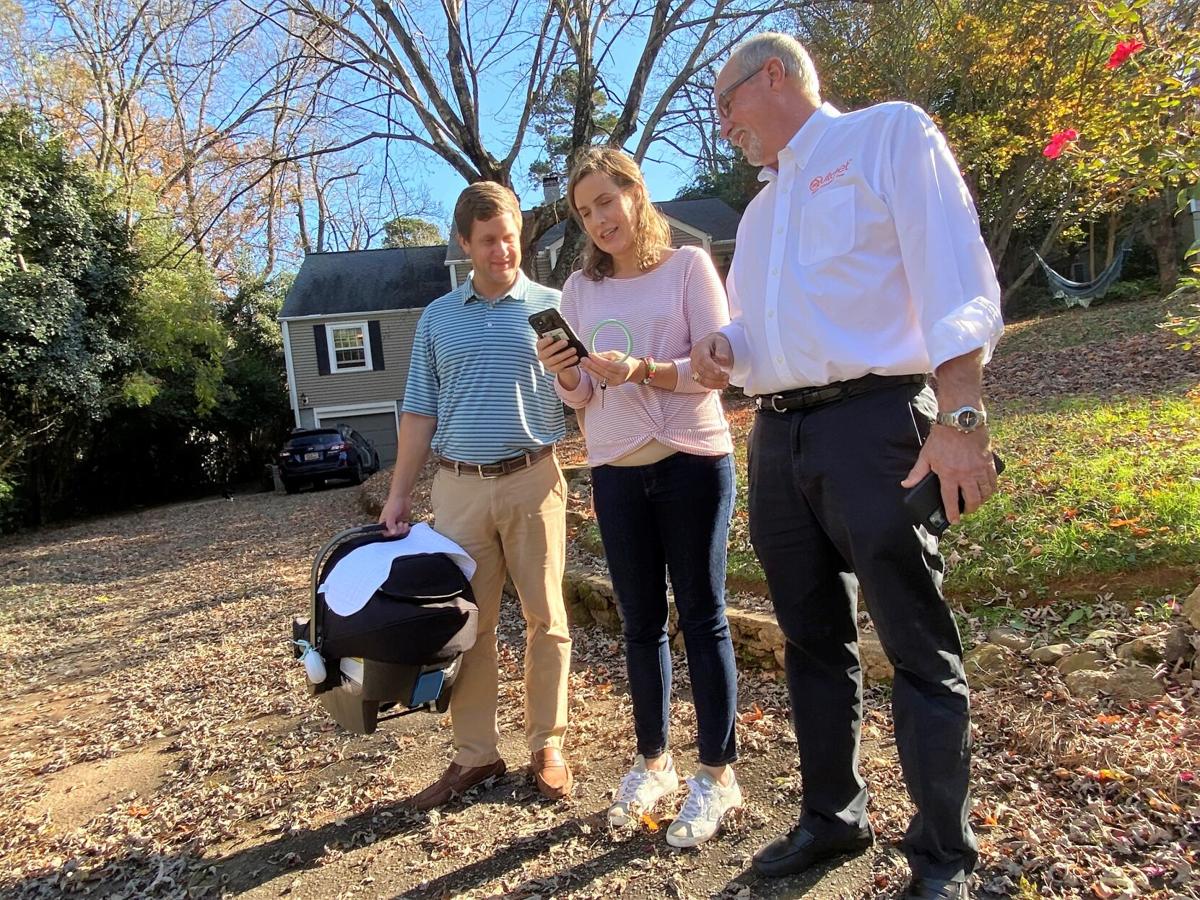 From left, Clark Grounsell, holding his one-month-old baby, Ruthie, Clark's wife, Ansley Grounsell, and their real-estate agent, Bob Morgan, use Morgan's new mobile app -- Quitchet -- to review details about a home on Tallulah Drive in Greenville they are about to visit on Friday, Nov. 13, 2020. 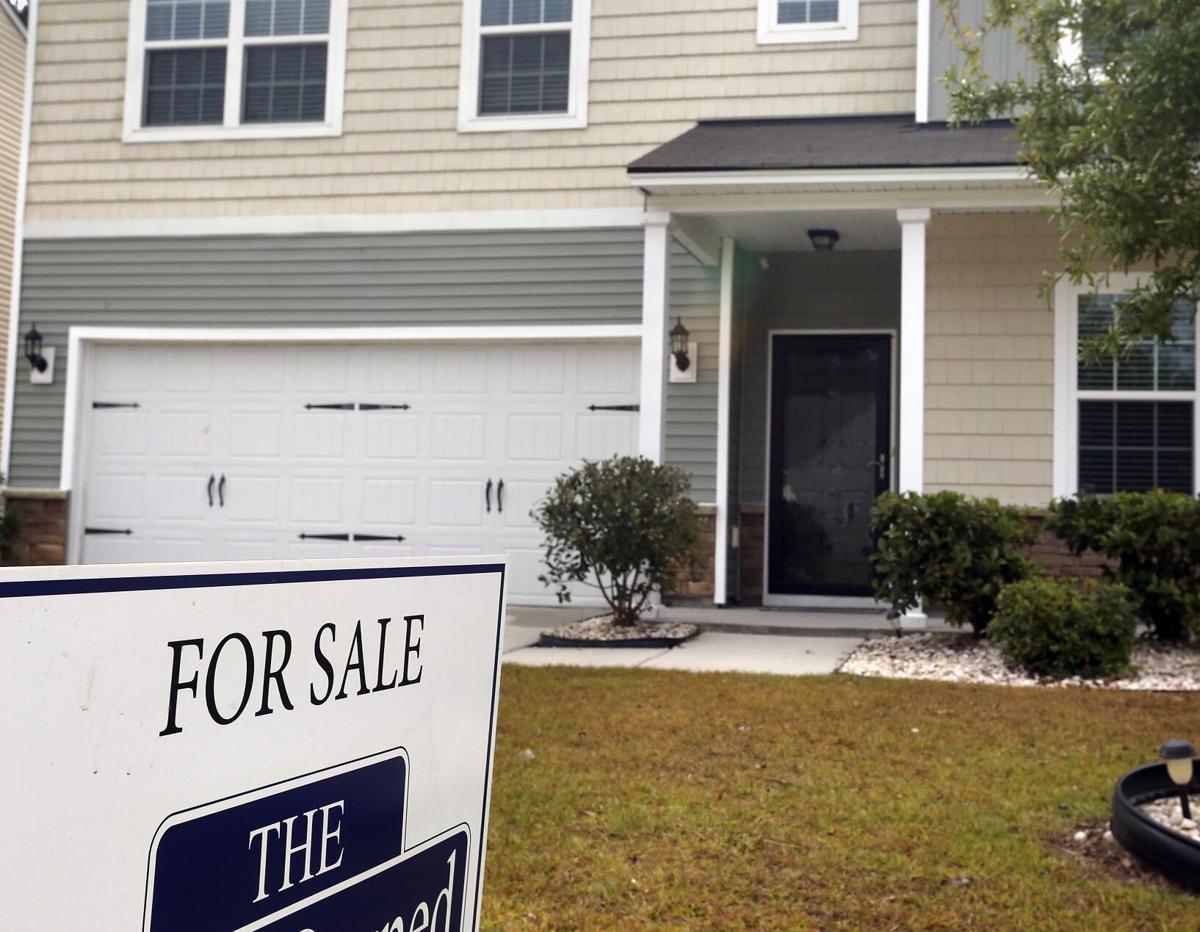 Home prices in South Carolina this year are up more than 10 percent through September, new statewide figures show. File/Brad Nettles/Staff

Called "Quitchet," the app is a new real-estate market program for mobile and desktop devices that interfaces directly between would-be home buyers, and sellers, and their real-estate agents.

Bob Morgan of Greenville came up with the concept and saw it through its six-year development. The KOPIS firm of Greenville applied the software muscle that streamlined its code and added more features. The Greater Greenville Realtors Association is providing the support and future users that Quitchet needs.

So far, the response has been positive.

Home buyer Ansley Grounsell pulled up to a house on Greenville's Tallulah Drive on a recent Friday afternoon and opened Quitchet on her cell phone. There she had saved all the data she needed to compare this house to others that she and her husband, Clark, were viewing that day.

"I'm obsessed with this app," she said. "The difference for me is being able to schedule all my showings, and I like having it all organized. It's so easy to add to my calendar."

For home buyers and sellers, the app looks at first a lot like Zillow, with details and maps to every home in the Greenville-area multiple listing service (MLS) accessible through a simple search. Visually, the biggest difference is the color — Quitchet is Clemson orange. Quitchet does not sell or display ads on its app, and only has homes listed by agents in the MLS. Zillow lets sellers bypass the MLS and sell homes "by owner" without an agent.

Functionally, the differences start with communication. Buyers and sellers can exchange messages on the app with their agents. While visiting houses, buyers can also store notes and their own photos in a file tied to individual showings. Later, while comparing listings, they can also pull up and compare specific rooms among the various listings — details that often get lost when a family visits multiple homes in a day.

On the agent side, Morgan said, the differences are more pronounced. Unlike Zillow, Quitchet only lists the agents representing specific properties. The app lets these agents set up and organize showings, and its chat function automatically communicates times and places of showings to buyers and sellers. Another feature: Agents can map out the most efficient route for a day of showings, sharing those with clients so they do not have to ride in the same car.

"We appeal to team leaders and brokers in charge because they can track agents and their showings for safety," Morgan said. "You can also see who agents are working with."

Morgan, who is an independent contractor with Greenville's largest real-estate firm, C. Dan Joyner, came up with the concept while taking his older daughter and her husband on a homes tour. It was their third day out, and they were looking at 11 homes that day.

"I handed them their printouts, and I said, 'Here's what we are going to see today," he said. "We drove a block, and I heard paper rustling in the back seat. Then my son-in-law said, 'There should be an app for this.'"

Morgan agreed, pulled over the car and started hatching a plan.

After four years of initial development, a soft launch that let 40 agents trouble-shoot the app, and another year of development with local software firm KOPIS, Quitchet was released in October in the Greenville market.

So far, it is only available in Greenville.

The biggest step toward making the app a reality, Morgan said, was getting a nod from the Greater Greenville Realtors Association, which controls the area's MLS. Every housing market in the United States has an MLS, which is a list of homes for sale or for rent. Real estate companies pay a fee for access and to share their listings. It is this data that powers real-estate apps like Zillow. The Greater Greenville Realtors Association voted to support the Quitchet concept in 2016, which empowered Morgan to pursue more investors.

"The more people who see a listing, the more likely it is to sell for a better price," Morgan said.

"Everybody is on an equal footing."

Chris Stone, leader of Greenville's meteoric tourism rise, to step down at end of 2020

The timing for his launch is good: C. Dan Joyner hit $1 billion in sales in the greater Greenville area in late October, three weeks earlier than in 2019, said David Crigler, the firm's executive vice president and COO.

"How about that?" Crigler said. "From May when we were all sitting around saying, 'Uh, oh, what's this going to look like?'"

The market has been buoyed by low interest rates and low inventory that continues to keep buyers hungry, Crigler said. Although sales dropped by half in May, they came roaring back in the summer.

By next year, Morgan plans to expand to three or four more MLS areas, and he dreams of eventually taking it national. As a tool made by and for Realtors, the business model is to collect a fee from MLS groups, Morgan said.

"The customer is the MLS," Morgan said. "The realtor doesn't pay any additional money."

Nick Sabatine, CEO of the Greater Greenville Association of Realtors, said Quitchet is going to save realtors a lot of time.

Quitchet cleared two more critical hurdles in 2020. The first was to find a developer that could fine-tune the app. Realtors testing the app before launch said the interface was too slow. The second was securing a $50,000 SC Launch grant in February. SC Launch is a program of the South Carolina Research Authority that supports startups in the state. It awarded a total of $250,000 in startup grants to six companies last spring.

Morgan said within a couple weeks of receiving the grant, the coronavirus pandemic shut down the country.

"The next thing I knew there were no more meetings or presentations," Morgan said. "It was hard to get more investors, and nobody knew what the future was. So the SC Launch money was not huge, but it was critical with its timing."

The final challenge facing Morgan is getting people to use Quitchet. As with most apps, including Zillow, the power is in numbers.

"The more people use it, the better it works," Morgan said.